This is why I bought a Three Legged Dragon!

I always liked the 1980's Citadel Oriental Heroes range, as well as historical Samurai. I have a few of the Oriental Heroes range kicking about in boxes, and I have been buying odds and ends on e-bay. However,  I never really bothered too much with them as in Warhammer Armies they were only avaliable as a Mercenary Contingent for Dark Elves!
But what to do with the models? I could just us an expanded version of the Mercenary Contingent, or use the 2nd Edition list in Ravening Hordes, or the Samurai list for Warhammer Historical, or just make one up. However I had a different idea.

I wanted to field them as a Warhammer Armies army. The Empire list did'nt seem right as I would have to have crossbows and lots of Halberds models which the range does'nt have, and both the Bretonnian lists meant finding mounted Knights. Mounted Samurai are great, but I wanted to just use the Aly Morrison miniatures, still avaliable from Foundry  http://www.wargamesfoundry.com/our-ranges/ex-citadel/samurai  , or models sympathetic to them.
So, to represent Elite Samurai in Heavy armour I hit on the idea of using the Chaos army list. Chaos Warriors and Maruaders would work well, but are very costly in points, but an army of Samurai Chaos Thugs in heavy armour would be great  and have an elite type of profile....

...and so with that idea, I thought I could have Oriental monsters and Oni (I have some Oriental Ogres whic would make great Oni using Minotaur rules). And whilst looking online I found a wonderful Chinese Dragon made by Mirliton (who now produce most of the old Grenadier model range in Italy) for reduced sale at Tritex Games http://www.tritex-games.co.uk/  , and at a bargain price. It would seem that the Dragon was sent in with only three legs, and so I thought with a bit of modelling he would make an excellent Nipponese Wyvern, either as a mount for a hero or a pet for a Wizard.

I will do a proper update on the Chaos Nipponese Army at a later date, but for now... 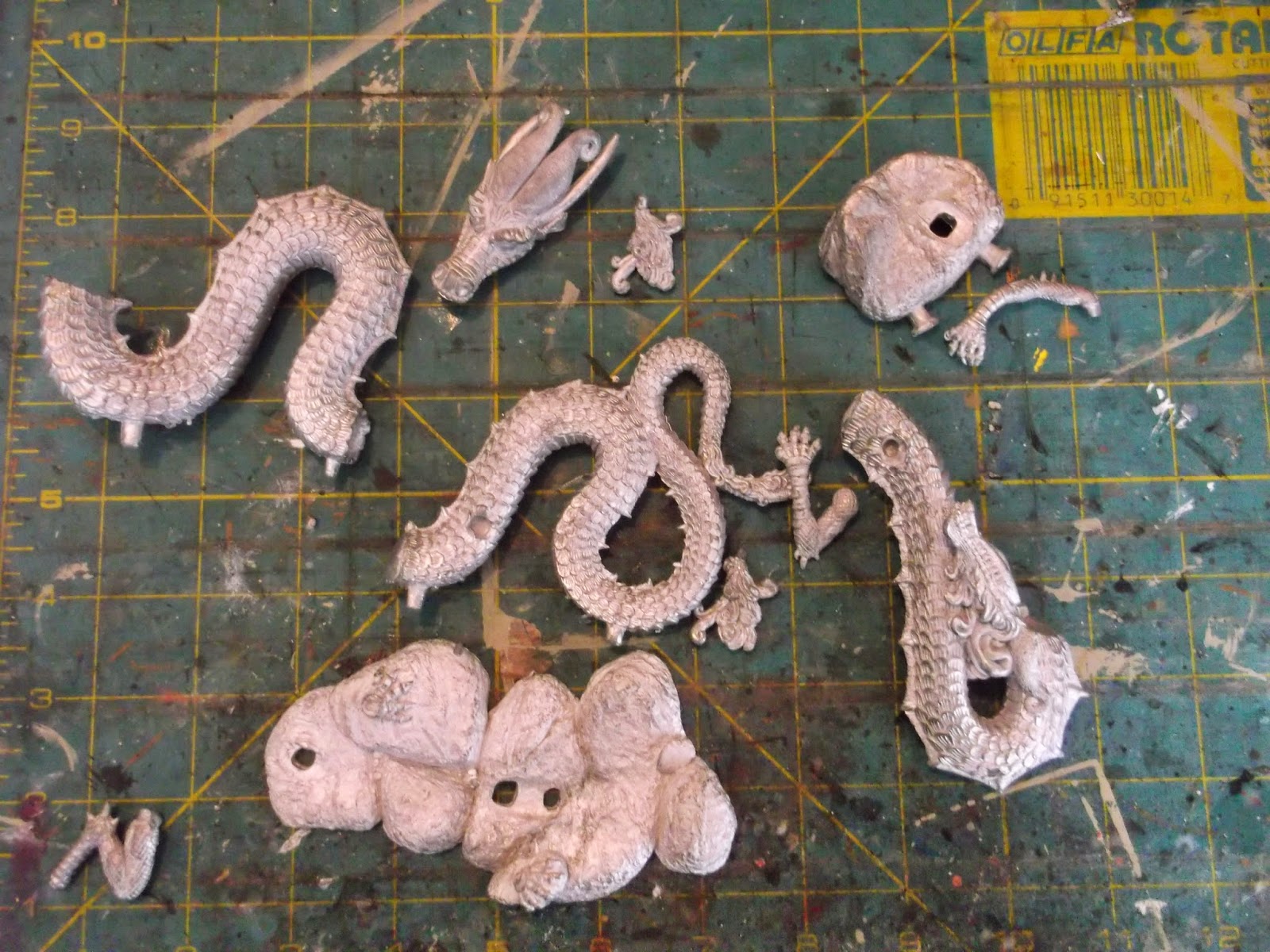 Bits!
It is a lovely detailed model. 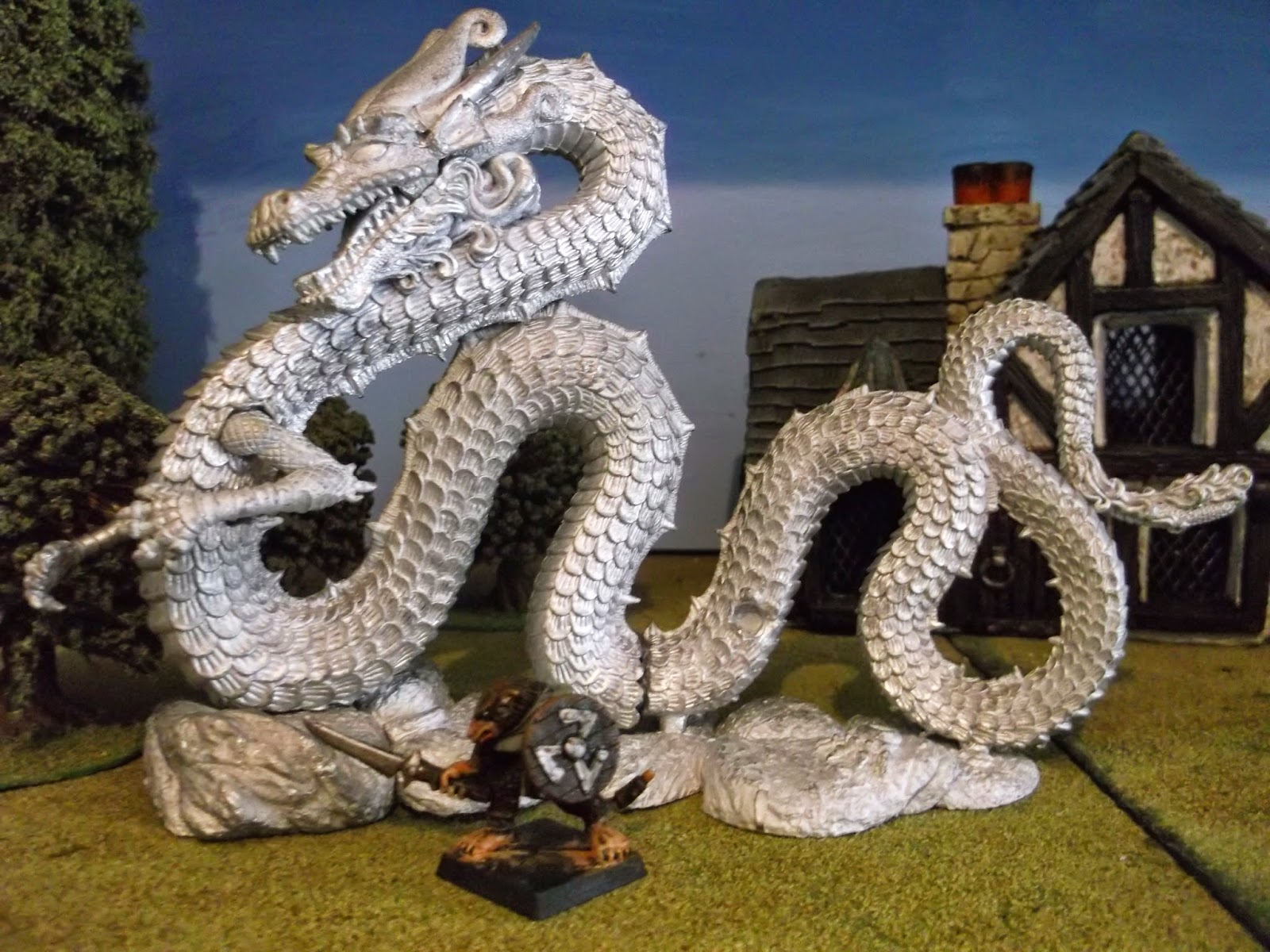 Assembled, all be it balanced together.
It is a very large model, the Skaven for scale.
I will Greenstuff thesockets for the back legs (the missing leg was the reat left) and over the cast on feet on the metal base. In this way I will have a snakebodied two armed Wyvern, almost like a giant Oriental Snakeman, both very Chaotic and Oriental in feel.
I am aware that he does'nt have any wings, a vital characteristic for a Wyvern, but many Oriental tales of monsters and Celestial Dragons seem to suggest that they fly on clouds, and so this 'Wyvern' shall too! It saves me mangling the model by adding wings. 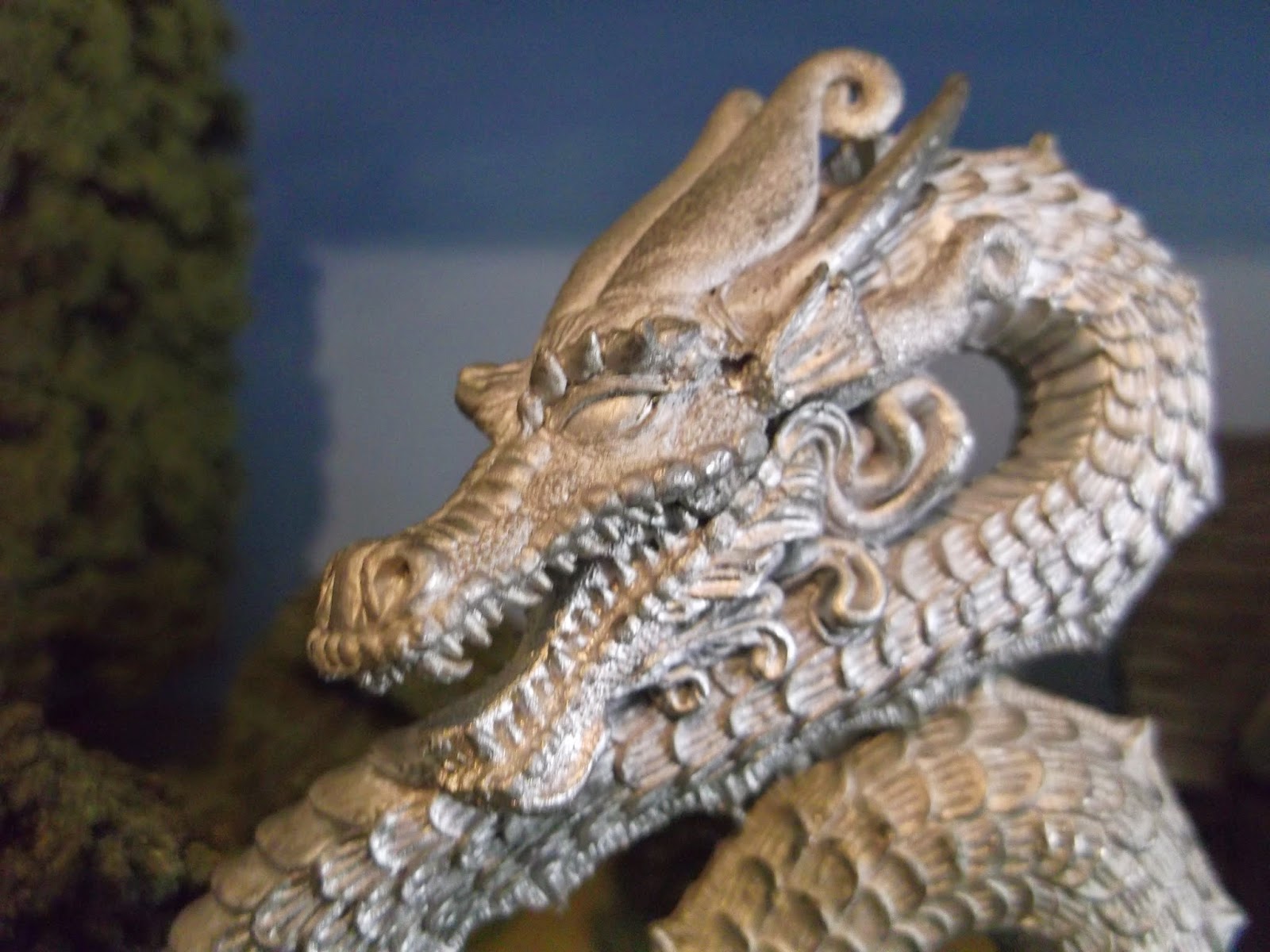 Apart from flights of fancy I have also been continuing to paint the Skaven army.
I have'nt got as far as hoped due to many of the distractions I mentioned, as well as the heat, have meant that I have only got 30 Clanrats speed painted. I did manage to also paint 3 Beastmasters, a Wizard, and a regimental leader for one of the Clanrat Regiments.
With the increase in the size of the army and the additional of several more metal models (which are lovely but will require more painting time), and the fact I have been very busy at work, I would suggest that the army will now be finished in mid August rather than by the start, but I will see what progress I make.
Enjoy :) 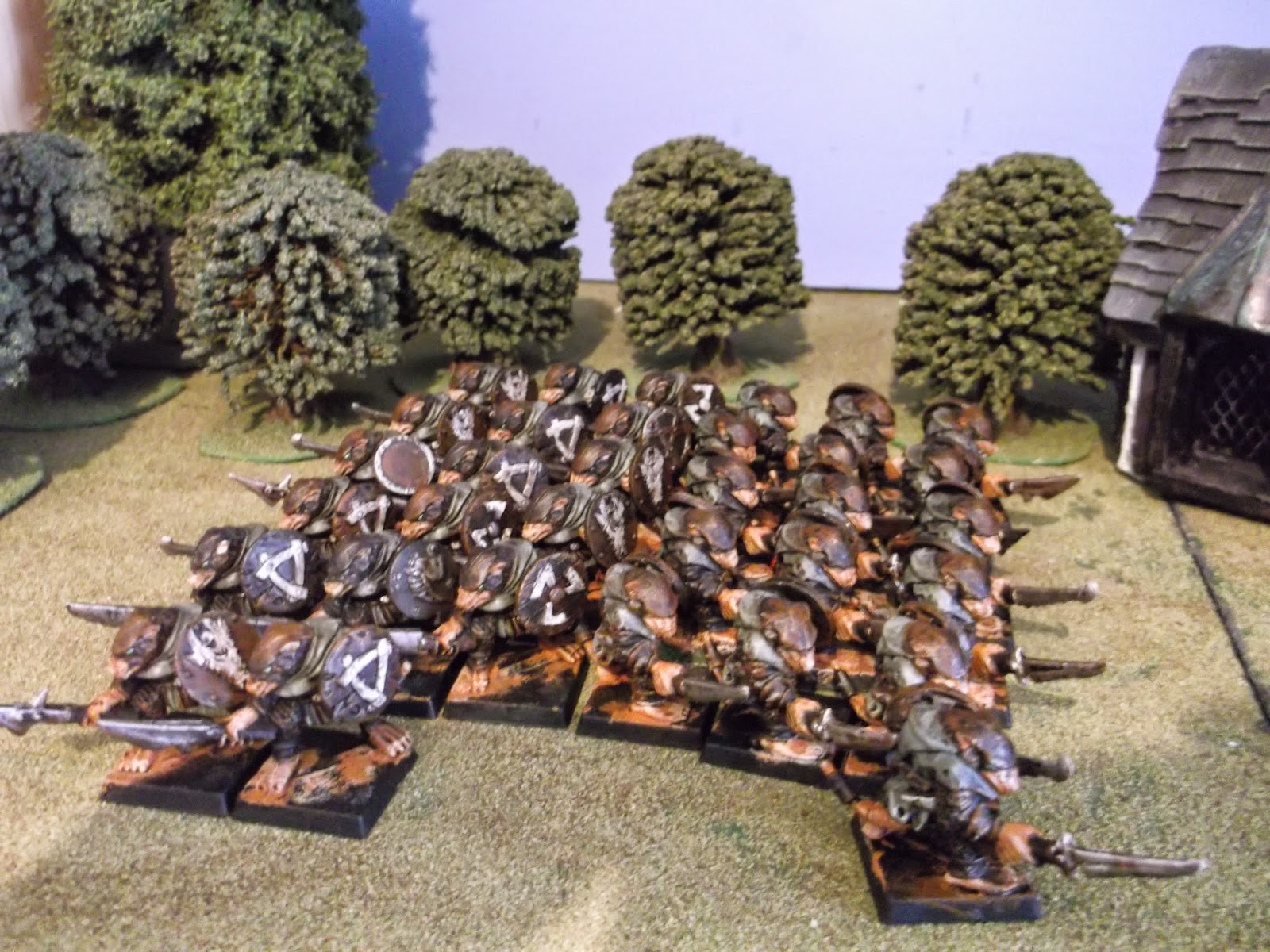 33 Heroquest Clanrats (3 of the test models and 30 from this week).
I encountered a problem with the speed painting in that the 'new' ratskin Flesk paint in darker than the old Dwarf Flesh. So I have editied the speed painting guide on my blog (see stage Four and a Half):
http://goblinlee.blogspot.co.uk/2014/07/speed-painting-skaven.html 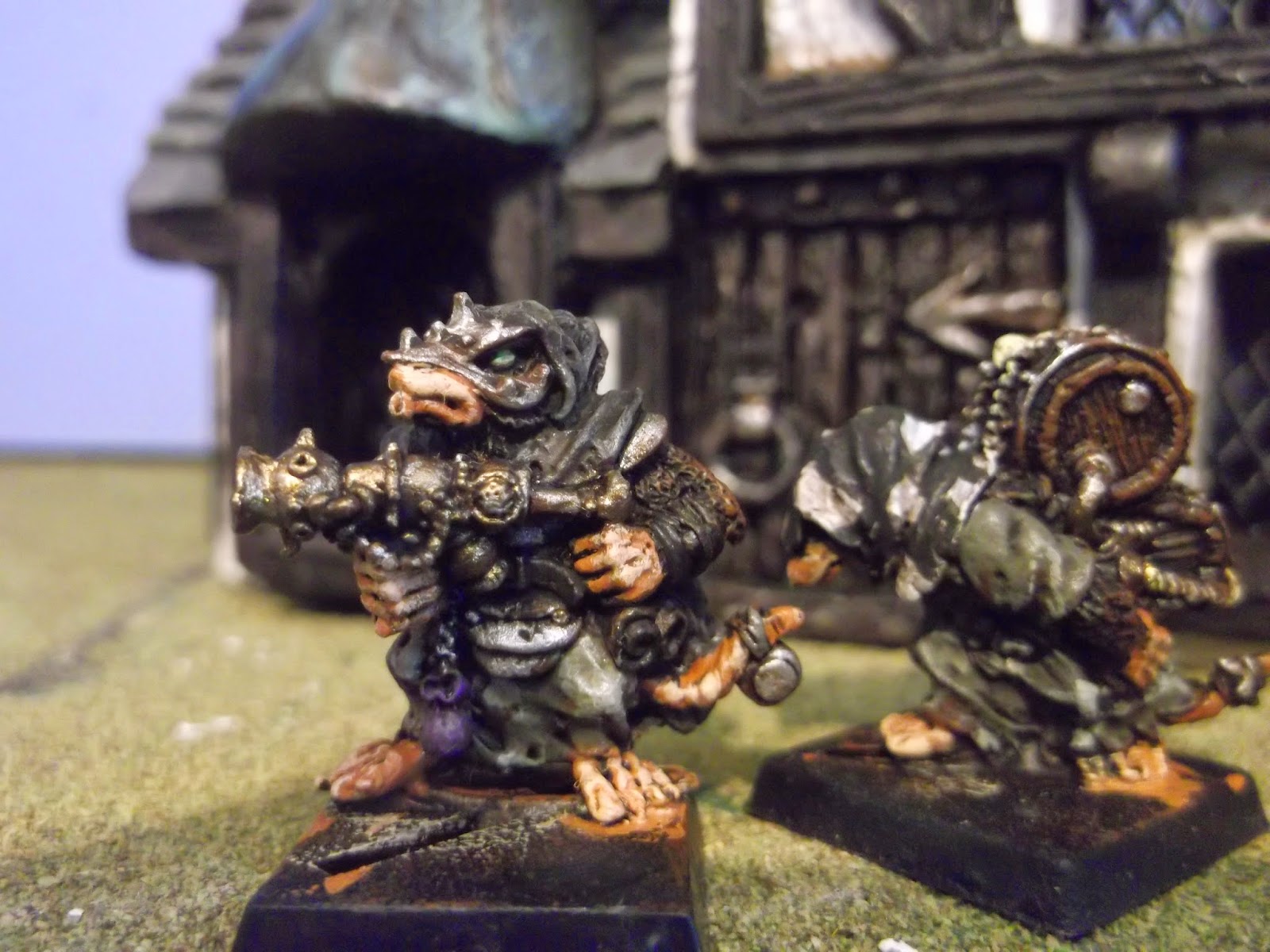 Apart from tinkering with the flesh I also added a brass look to the Warpfire Thorwers. 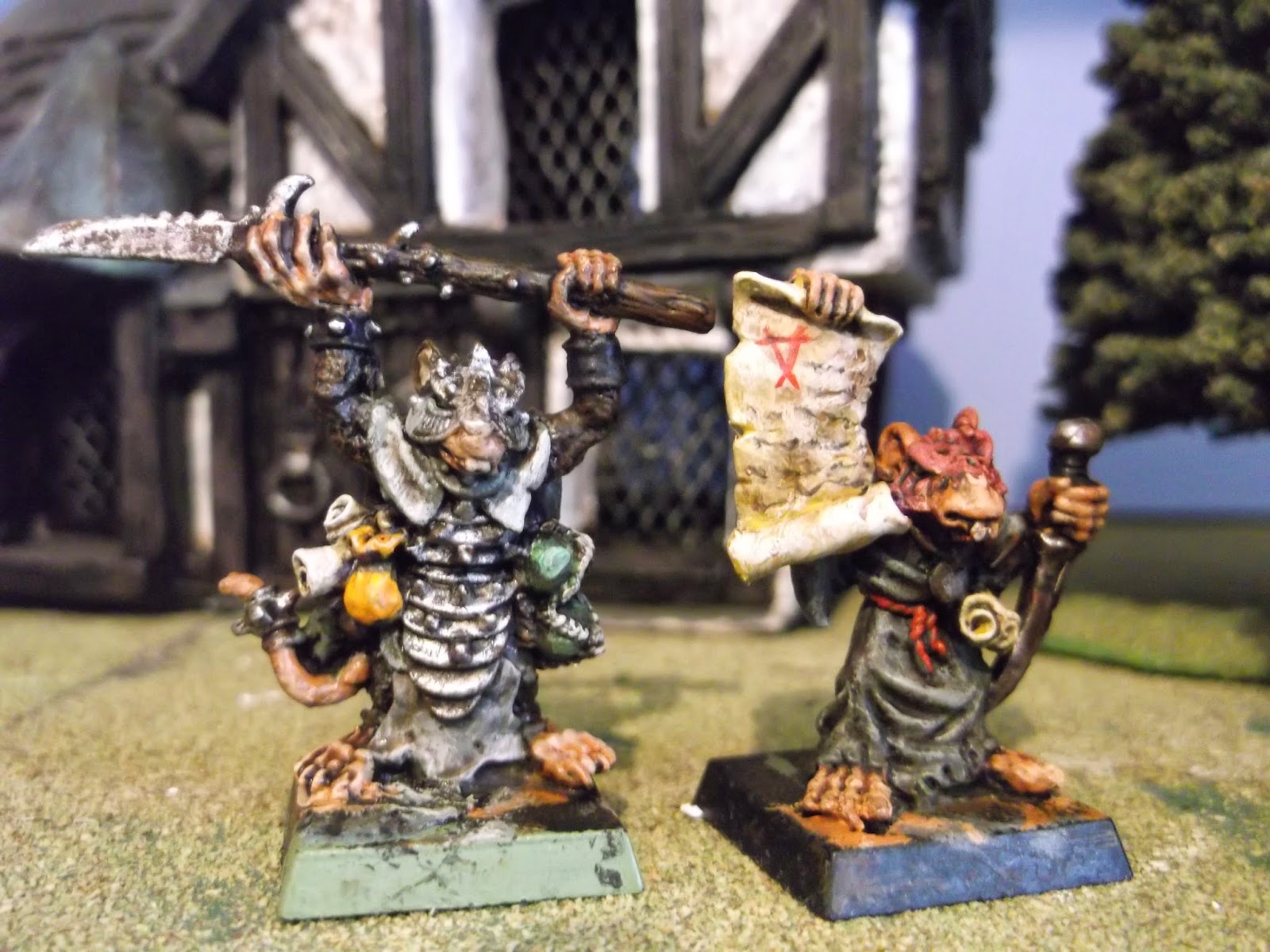 Regimental Leader and Wizard.
As I painted the army Genral Green, I thought I would paint this Wizard with red fur to differentiate them from the bulk of the rank and file Skaven. 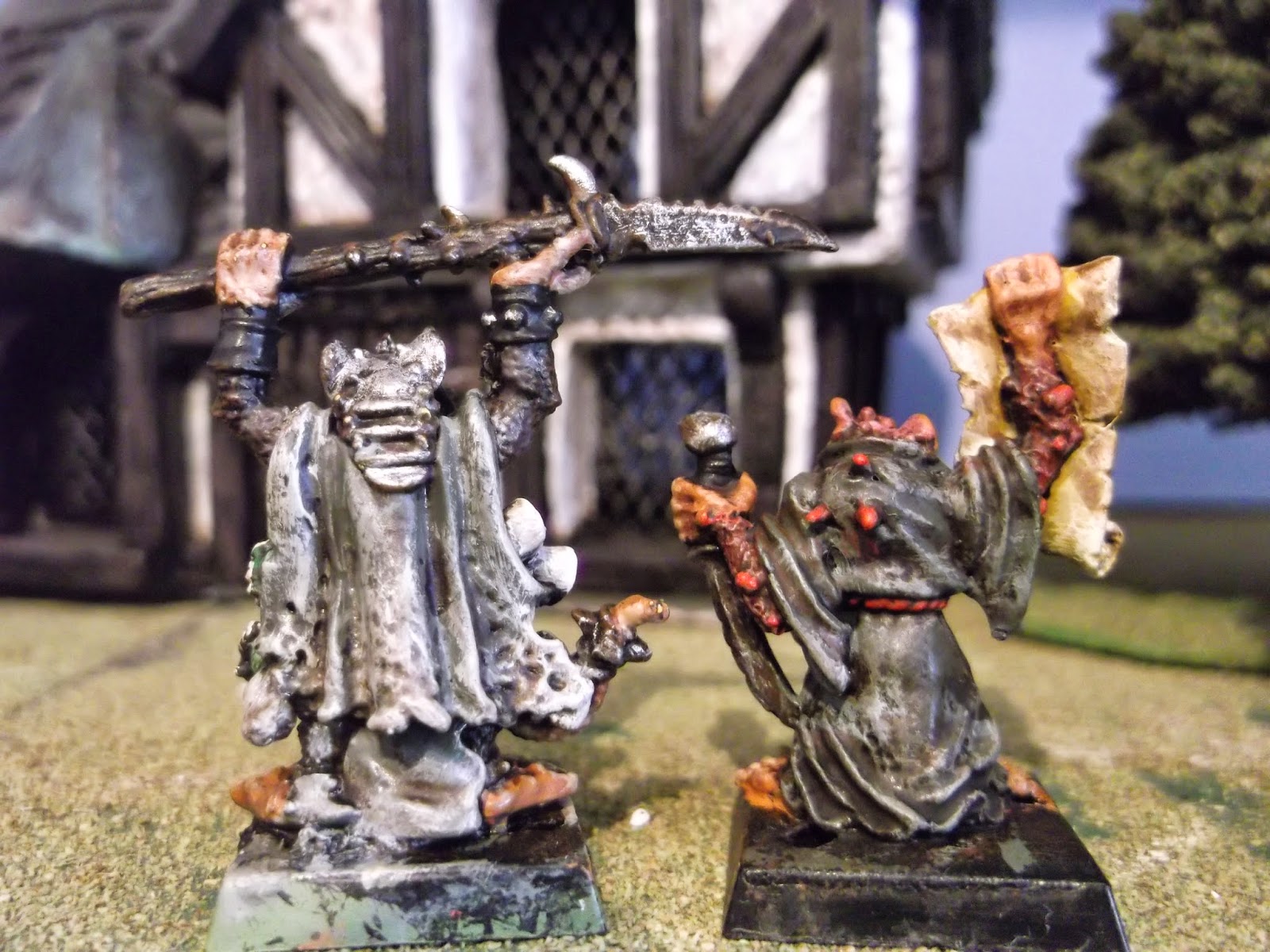 Rear views of both.
The red bits on the Wizard are spines, no doubt due to the warping effects of Chaos Warpstone. 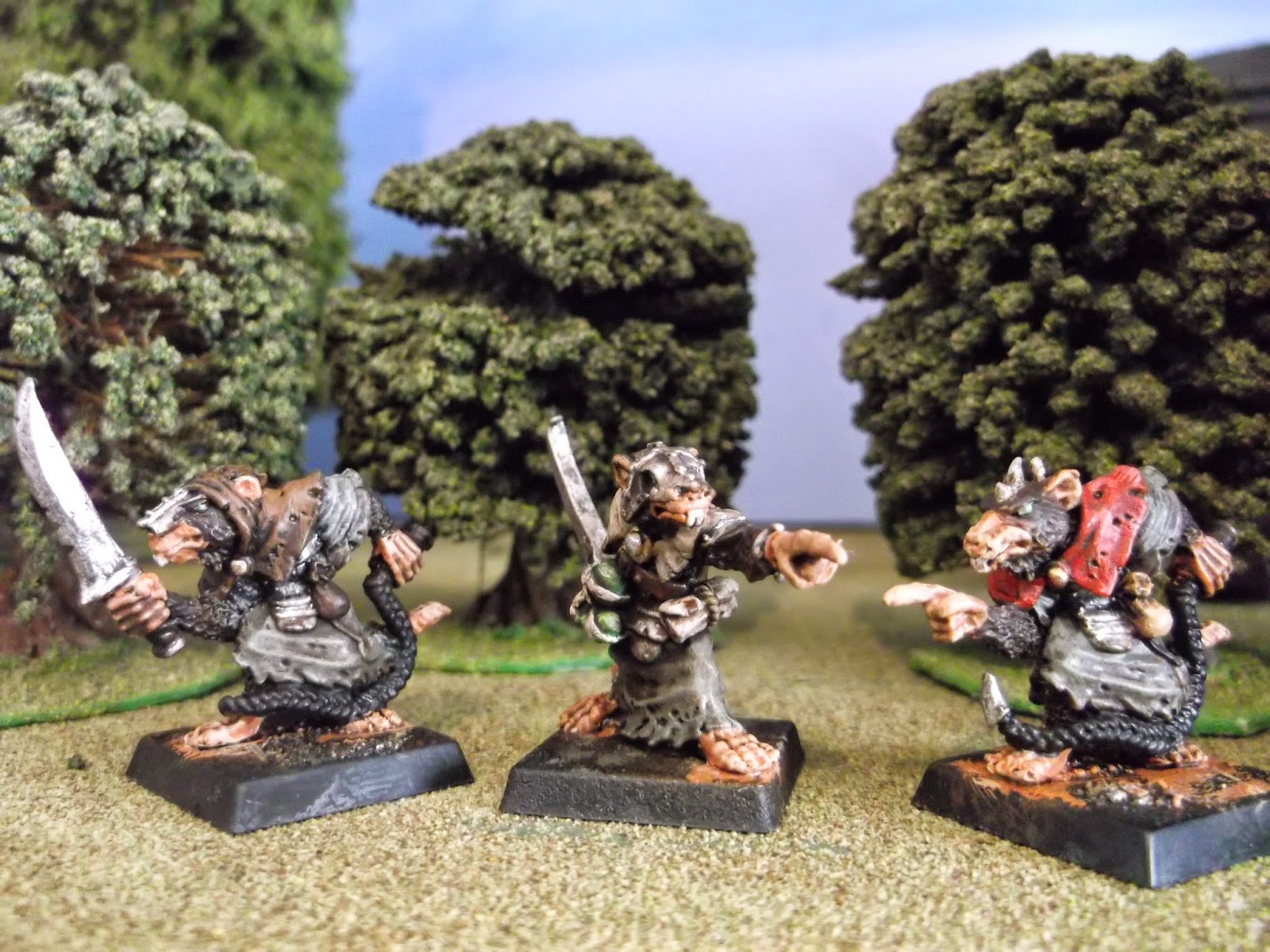 Beastmasters.
The one in the centre is a Skaven Command miniature, the other two actual Beastmaster models. I ditched the sheild option for them. 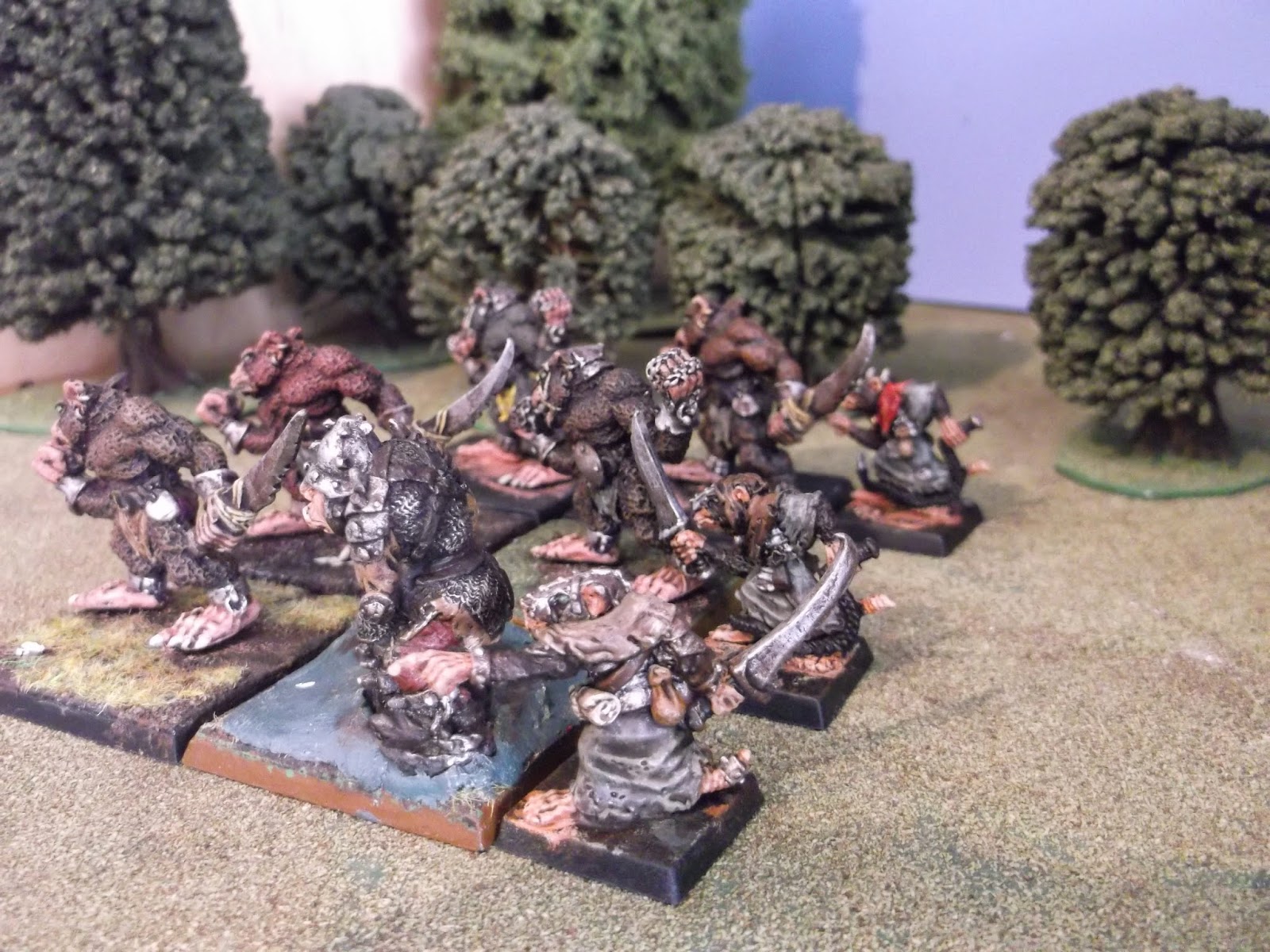 Beastmasters attached to the Rat Ogres regiment.
The next blog update will be yet more Skaven, of which I hope to have painted many more. I will also sort out some of the Oriental Heroes too. In addition, all this Pseudo-Orientalism has also got me looking at my Hobgoblin miniautres again, with an eye to paint stripping and re-painting them too. I will at some point do an update focusing purely on the 1980's Hobgoblin models.
Posted by Goblin Lee at 20:13