I have had a very busy week at work this week, and so have'nt had a chance to do any painting beyond the first stage of basecoating 150 Clanrats/Slaves. The only real painting I have done is for this blog update on, ironcially, how to speed paint Clanrats!

I did paint up the Wyvern, although I might add more highlighting and blending later this afternoon.

I also had a very interesting discussion on the compostion of Skaven army lists with the blogger
24_ Cigarettes. I was not 100% happy with the army list I had written for the Skaven and he has made several interesting suggestions for modifing the list from his experence using a 3rd Edition Skaven army. I have no experence with Skaven of any era as I never fielded an army of them or collected them properly until now.
You can check out his Skaven on his blog here:  http://fullashtraygaming.blogspot.co.uk/

There were things which I left out, such as Gutter Runners, and an army Standard, which I wanted to add to the army. I also only added the Stormvermin because I thought I should have one hard hitting regiment, but they don't seem too hard hitting, and I have the Rat Ogres for that. In addtion, like the Goblins, I think 30 might be too small for Clanrat Regiment so 36 or 40 might be the way to go.
So in response, I will be re-working the army list during the week. If anyone else has any suggests regarding 3rd Edition Skaven, please feel free to comment.

Apart from the Skaven, I have been picking up a few Heroes of the Known World and Knights of the Empire models from e-bay for my Rieksguard Regiment for the next project, The Empire Army. 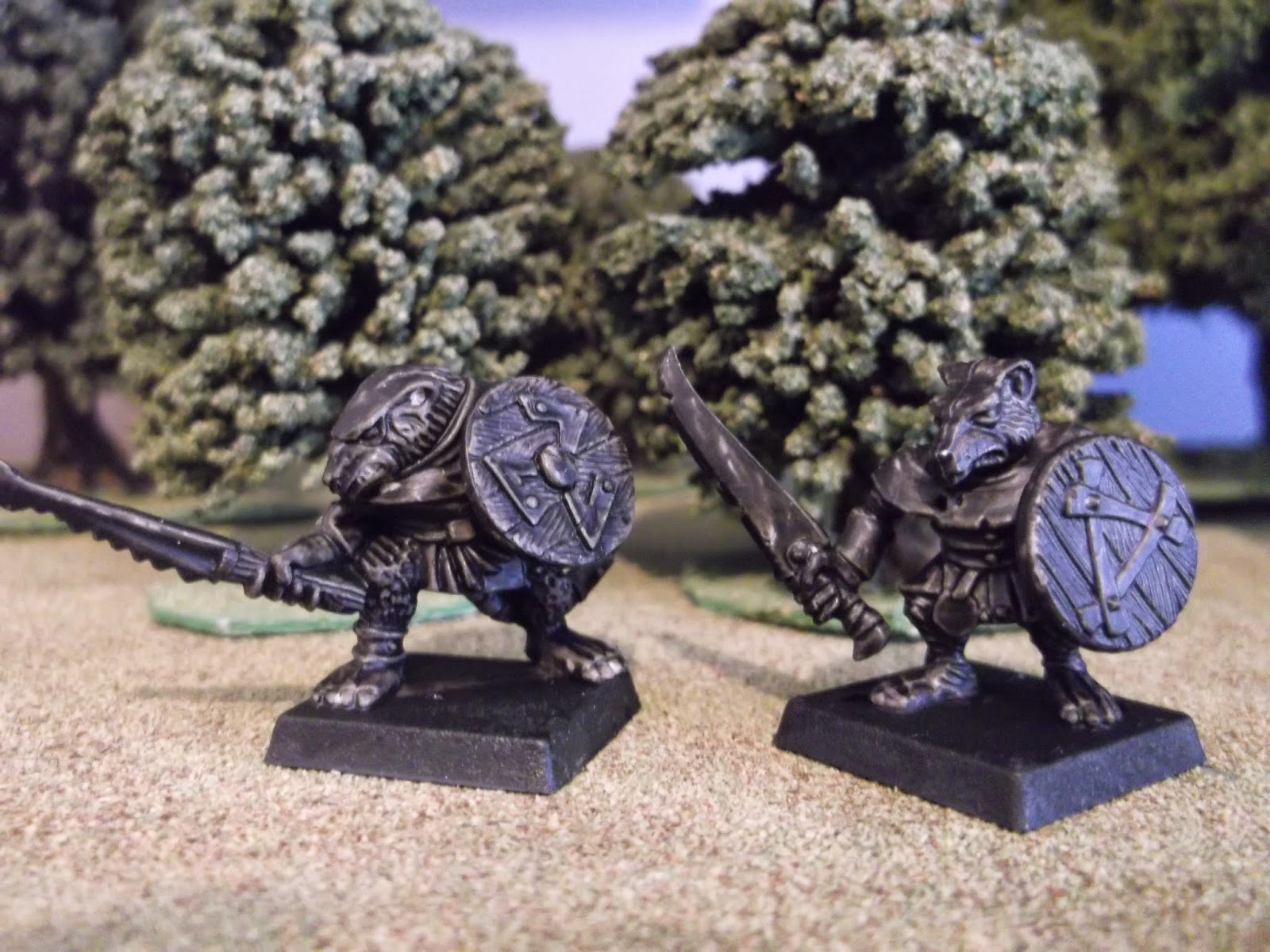 Speed painting Skaven:
The idea is to paint the scores of Skaven to a good battlefield standard. They won't be as detailed as say the Slann or Goblins I have painted, but I don't think they need to be as they will be in big blocks of dark coloured miniautres.
I have chosen one of the Heroquest Skaven (left) and one of the Warhammer Regiments box set Skaven (right) as examples as they are the most common models in my army, and often form the bulk of any Skaven army of this era which includes plastic models. I will be (and have with the Rat Ogres and a few test models) be using the same process for the metal models that form weapon teams or some of the other specailist troops. However with them I will also add more detailing and use a few extra colours, using the speed painting process as a basis from which to work.
So first step, undercoat them black. 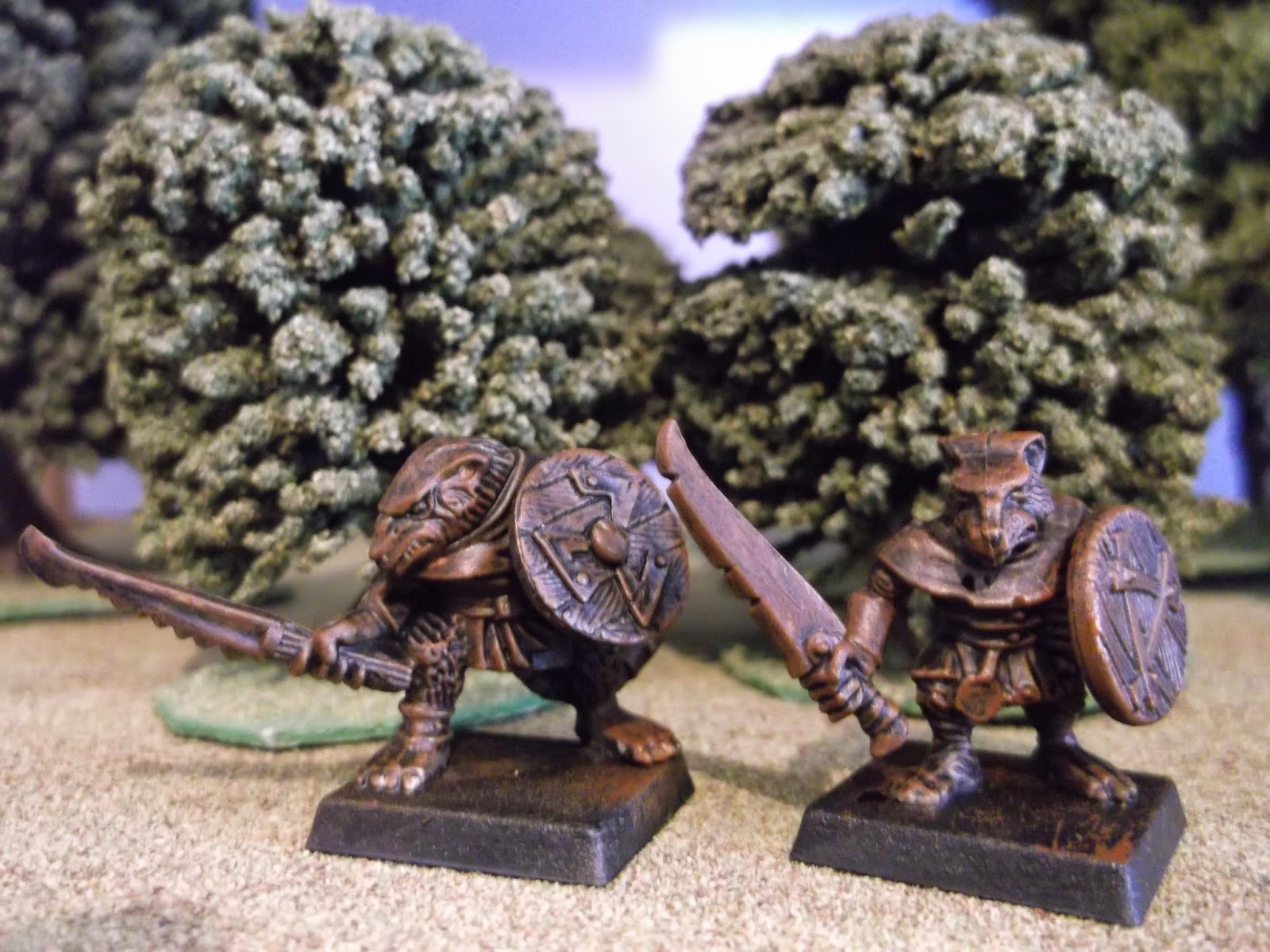 Secondly, drybrush the whole model with brown, I used Citadels Mornfang Brown, but any colour will do. I would suggest avoid using a very dark brown as it does'nt show up as well against the black and may require a further highlight.
I have dyrbrushed the sword blades too to suggest rust, but that is only my personal choice. 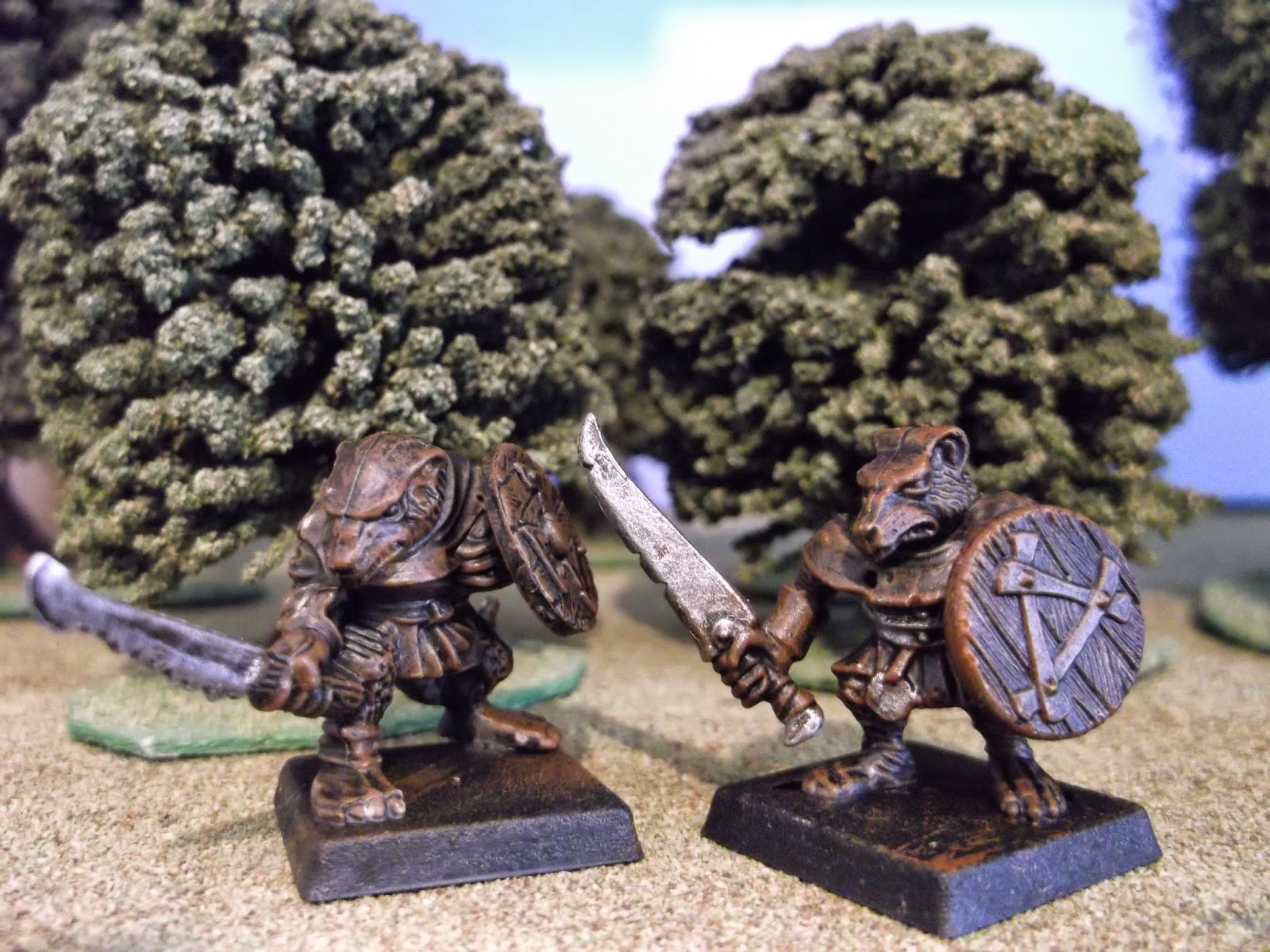 Thirdly drybrush with silver, I used Citadel Runefang Steel. I find that using silver gives a good highlight and on top of brown gives a good dirty rust effect. 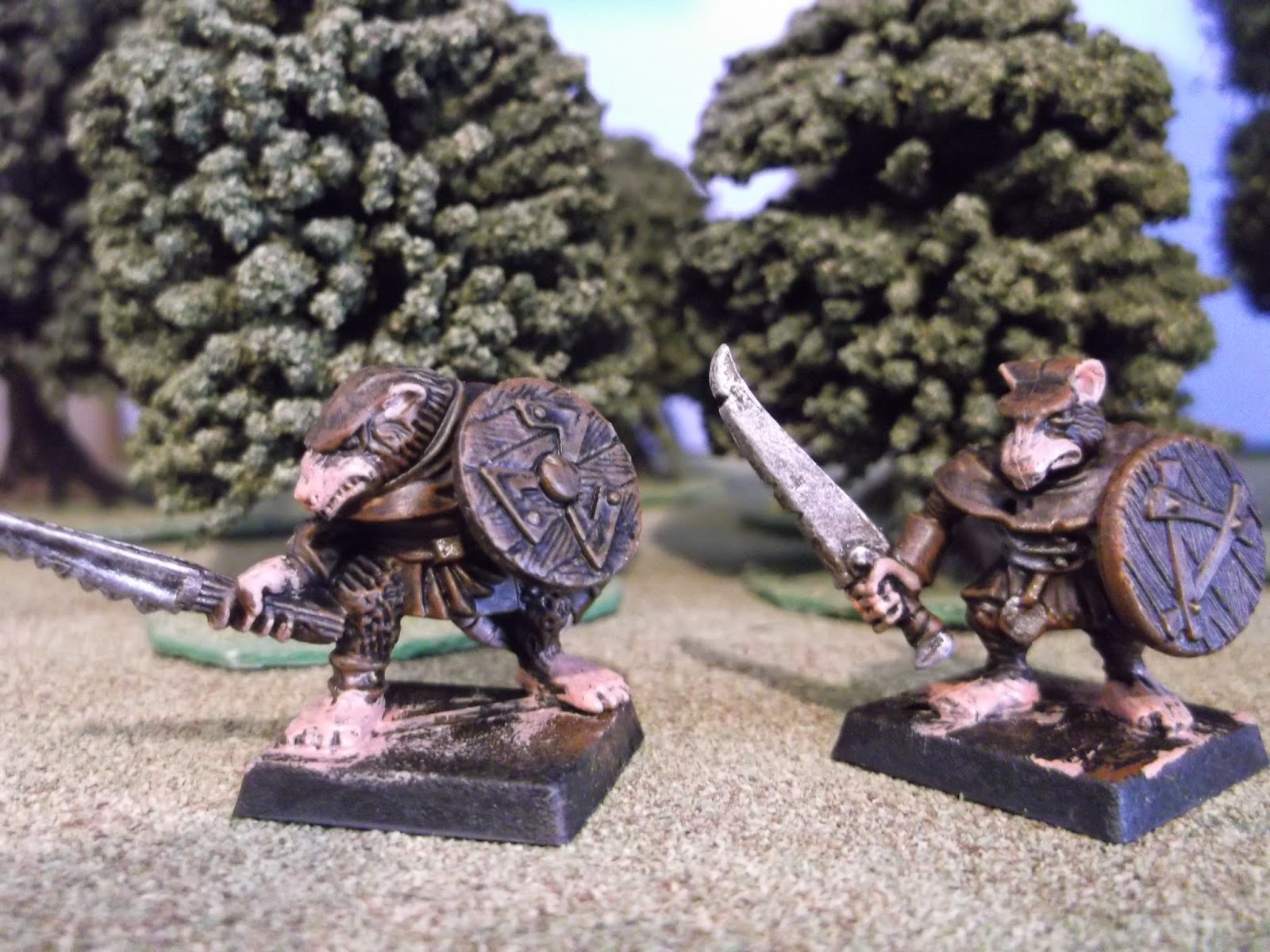 Fourth, paint the hands, feet, face, tail, and ears a pink-ish flesh colour, I used Citadels Dwarf Flesh, which usefully for this army is now named Ratskin Flesh.
I did'nt highlight the flesh on the Clanrats, which I have done on the Rat Ogres I painted last week, and will do on the weapon teams. This was only becuase I was painting fast, and the flesh colour will act as it's own highlight when I ink the models later. 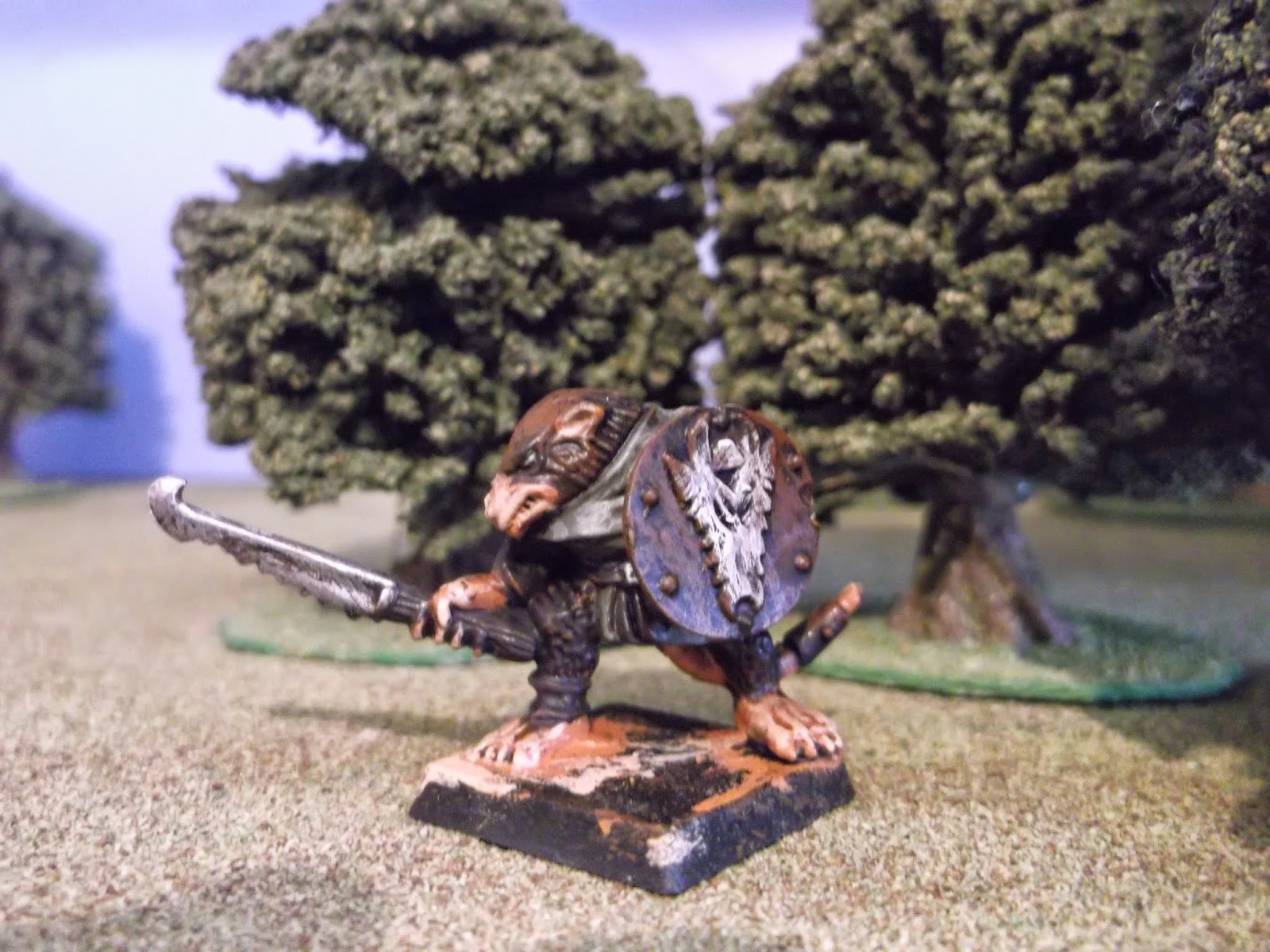 Games Workshop changed the paint Dwarf Flesh to Ratskin Flesh, which while they stated was the same paint, is'nt. Ratskin Flesh is a lot darker. With the speed painting technique above the effect looks very dark and so as a Stage 'Four and a Half' I now highlight the Ratskin Flesh with Kislev Flesh, as illustrated in the example above. 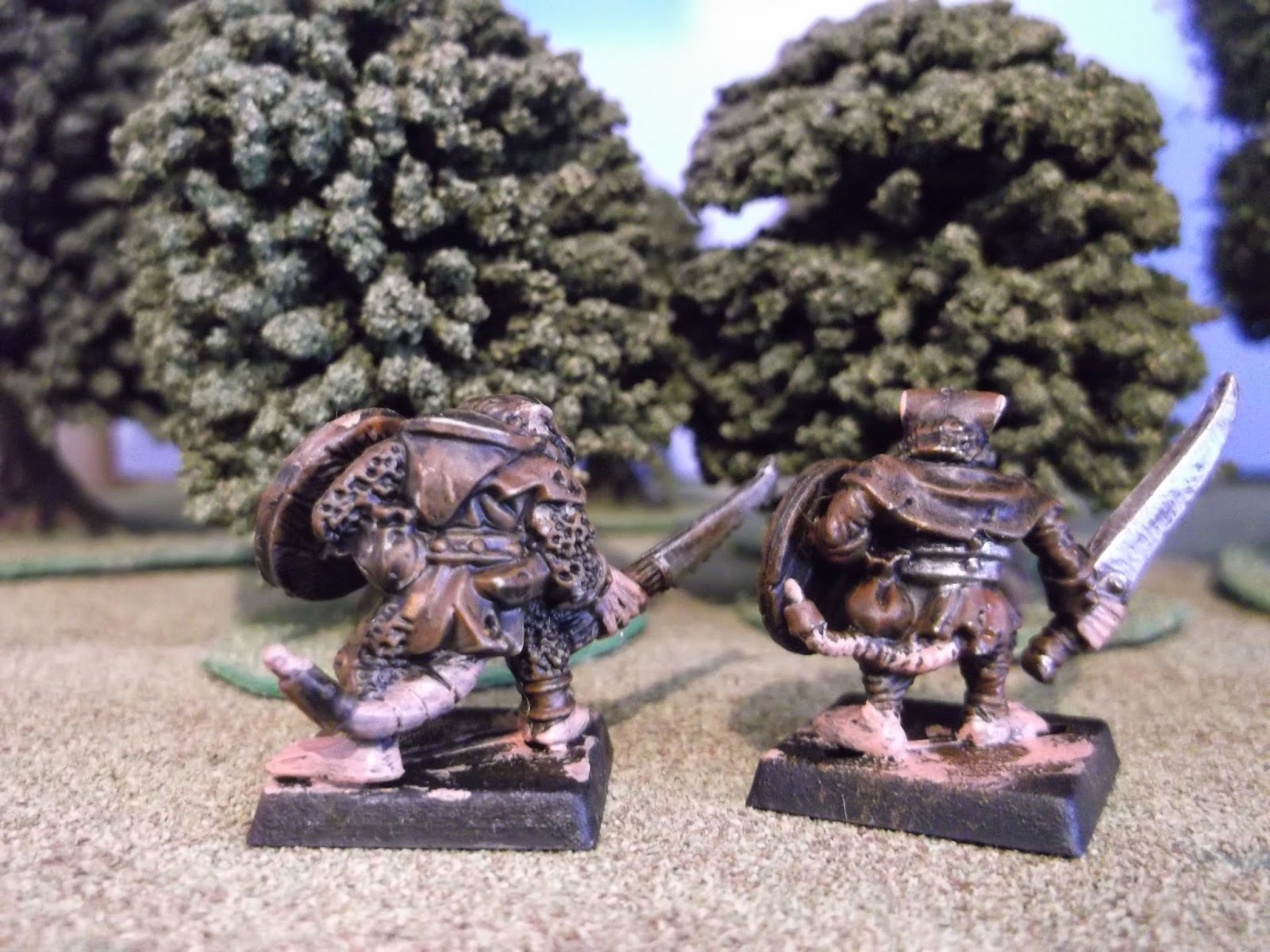 Rear views, with the ratty tails. 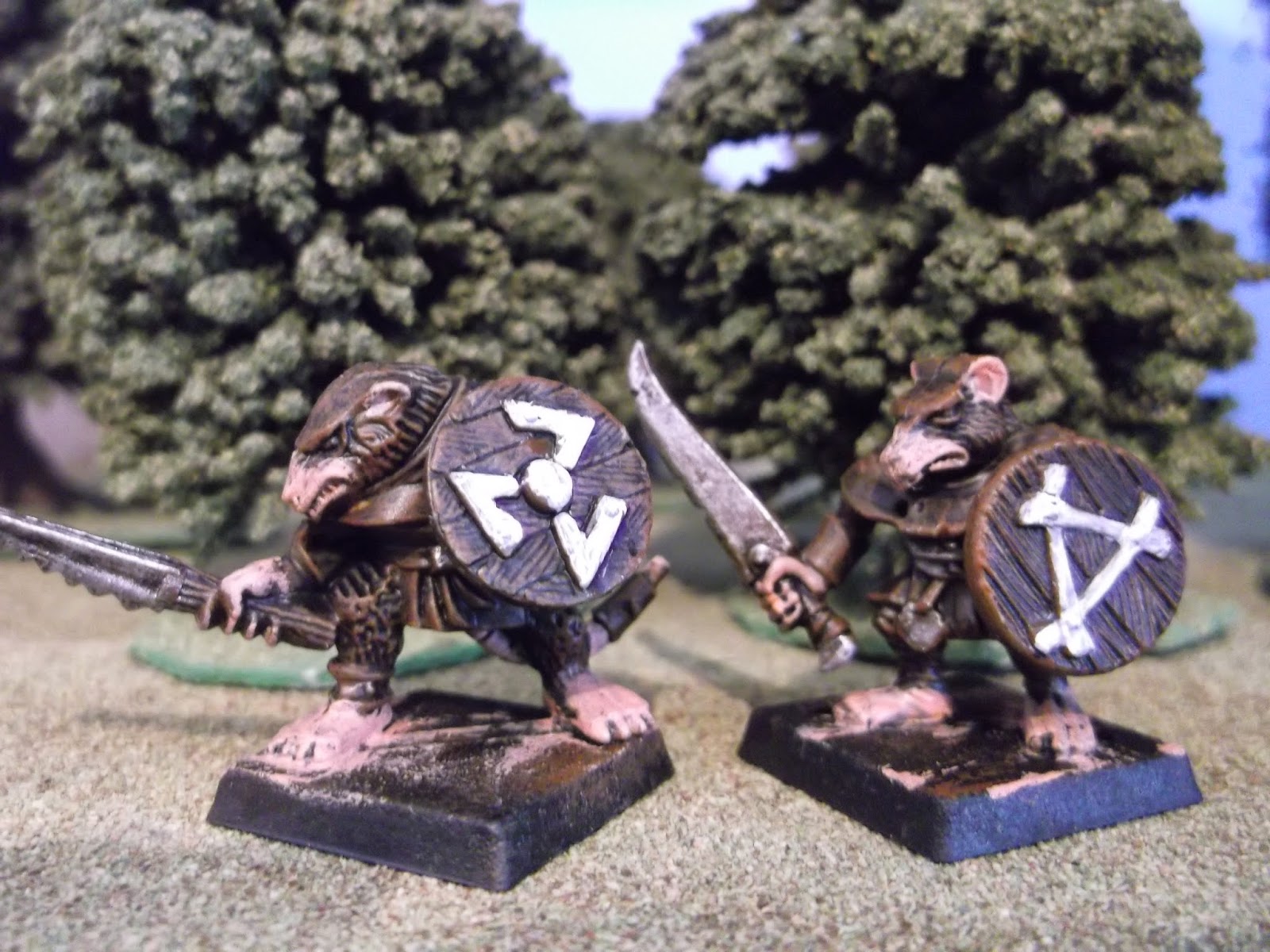 Five, paint the white.
This is usually for the Clan motives on the sheilds, and for added details the teeth and claws, which again I did on the Rat Ogres and Weapon Teams but not to concerned on the Clanrats and Slaves. 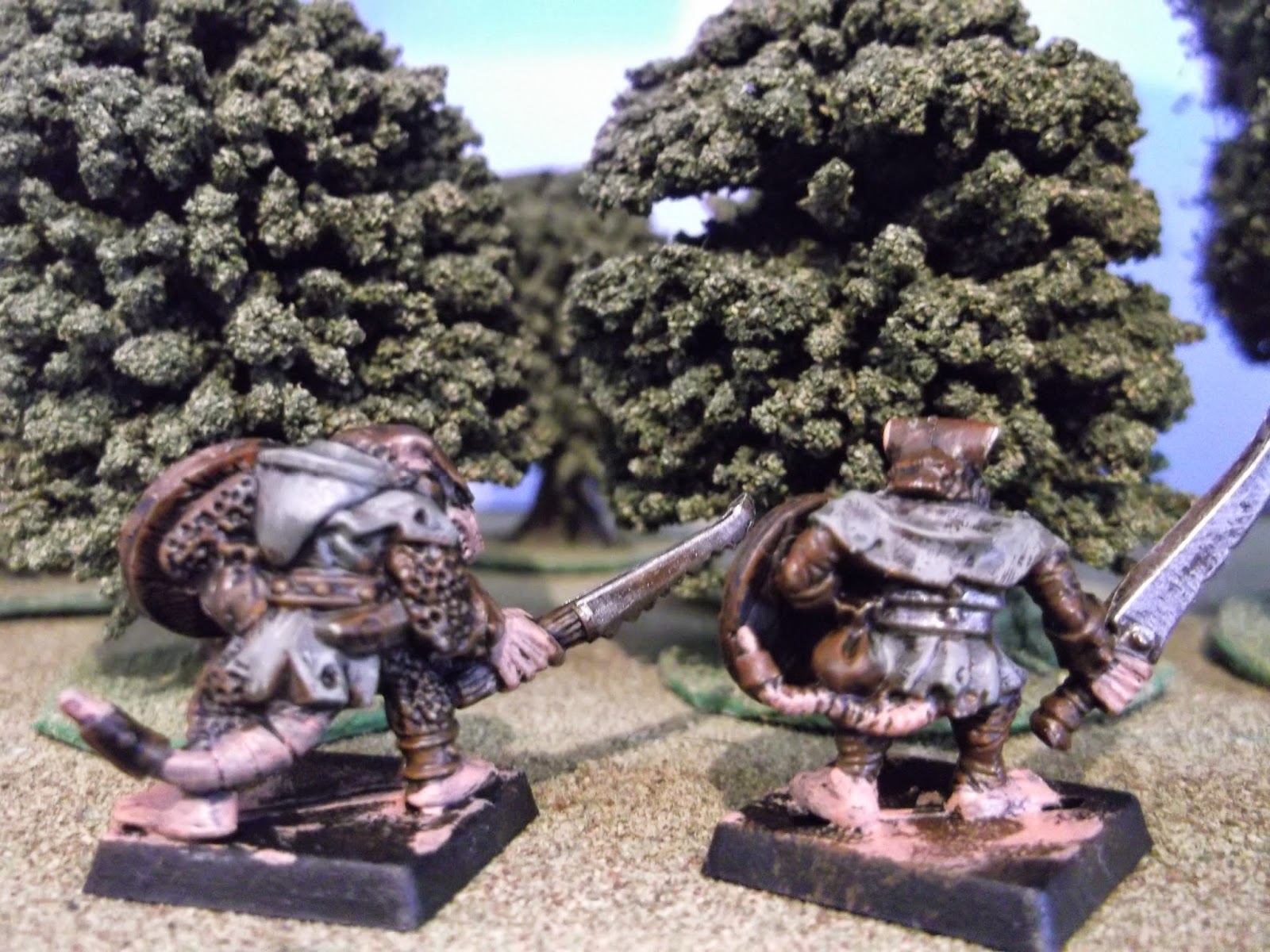 Six, the clothes.
I chose to drybrush lightly over the brown with Vallejo German Field Grey as it is a suitable grubby colour and with the brown underneath gives a dirty effect.
I also added a heavy contrast highlight of the grey mixed with white, the only two stage colour in the speed painting, to suggest old faded clothes, and to again tie in with the inking later.
I have shown the rear views of both as they is more cloth visable than the front. 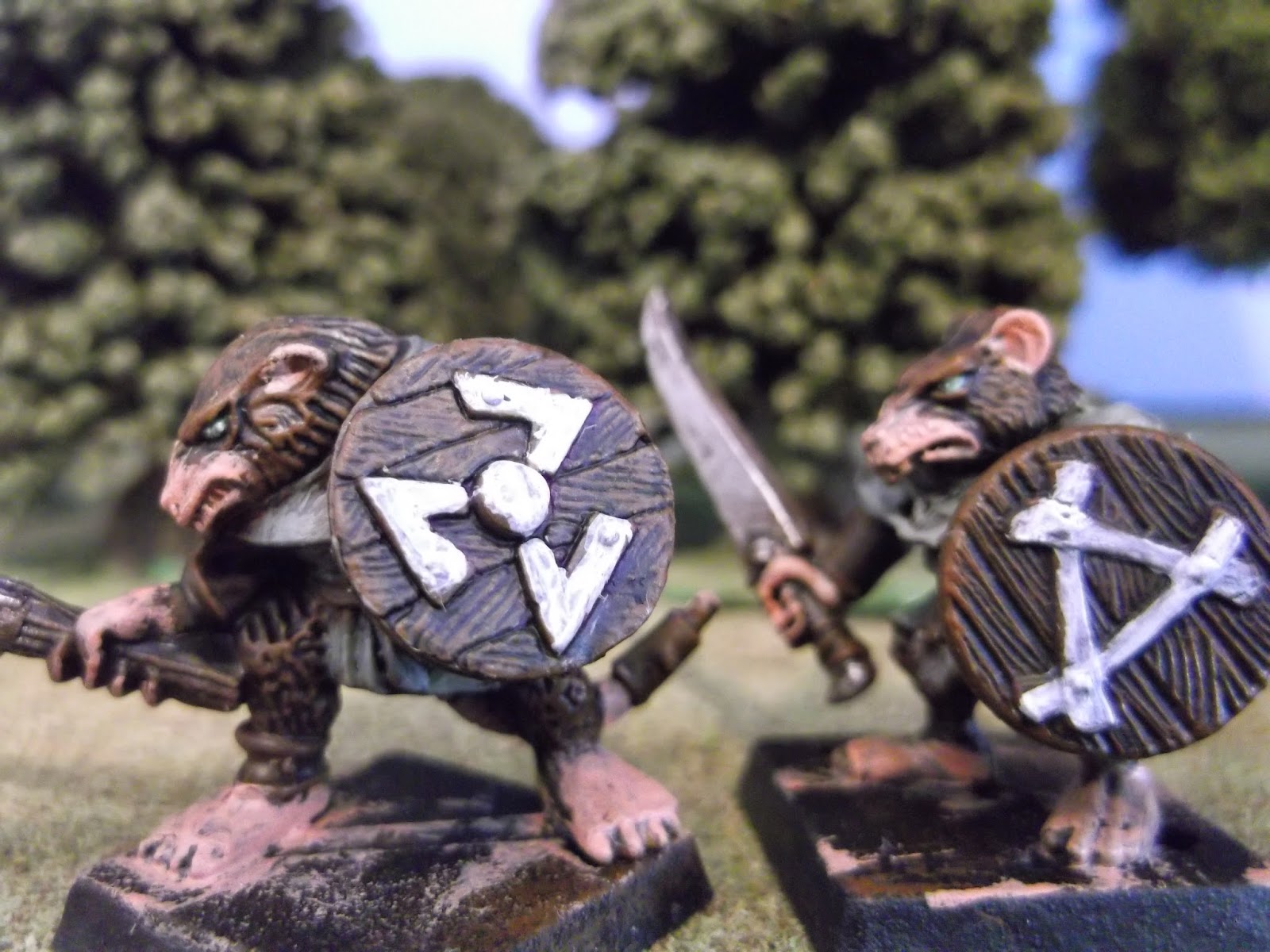 Seven, paint the eyes.
I have painted the eyes using Vallejo Fluorescent Green mixed with a little white to give that bright Warpstone infused glow. Red is a more standard choice, but I like the green. 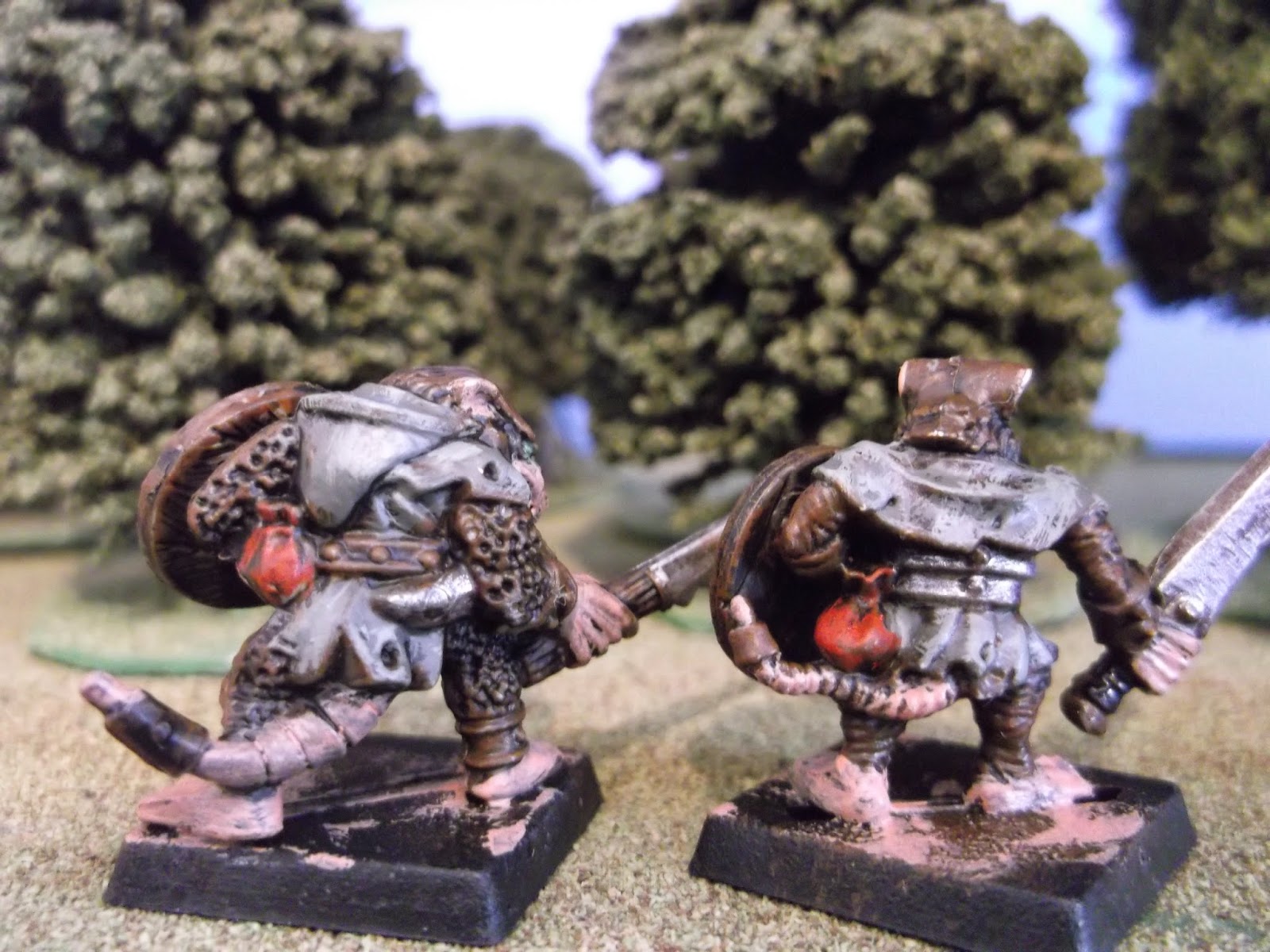 Eight is the detailing.
Both models have a few little details on them, I have chosen to give a quick drybrush of red to the pouches, and siler to the dagger (whci I forgot to do when I painted the swords!)... 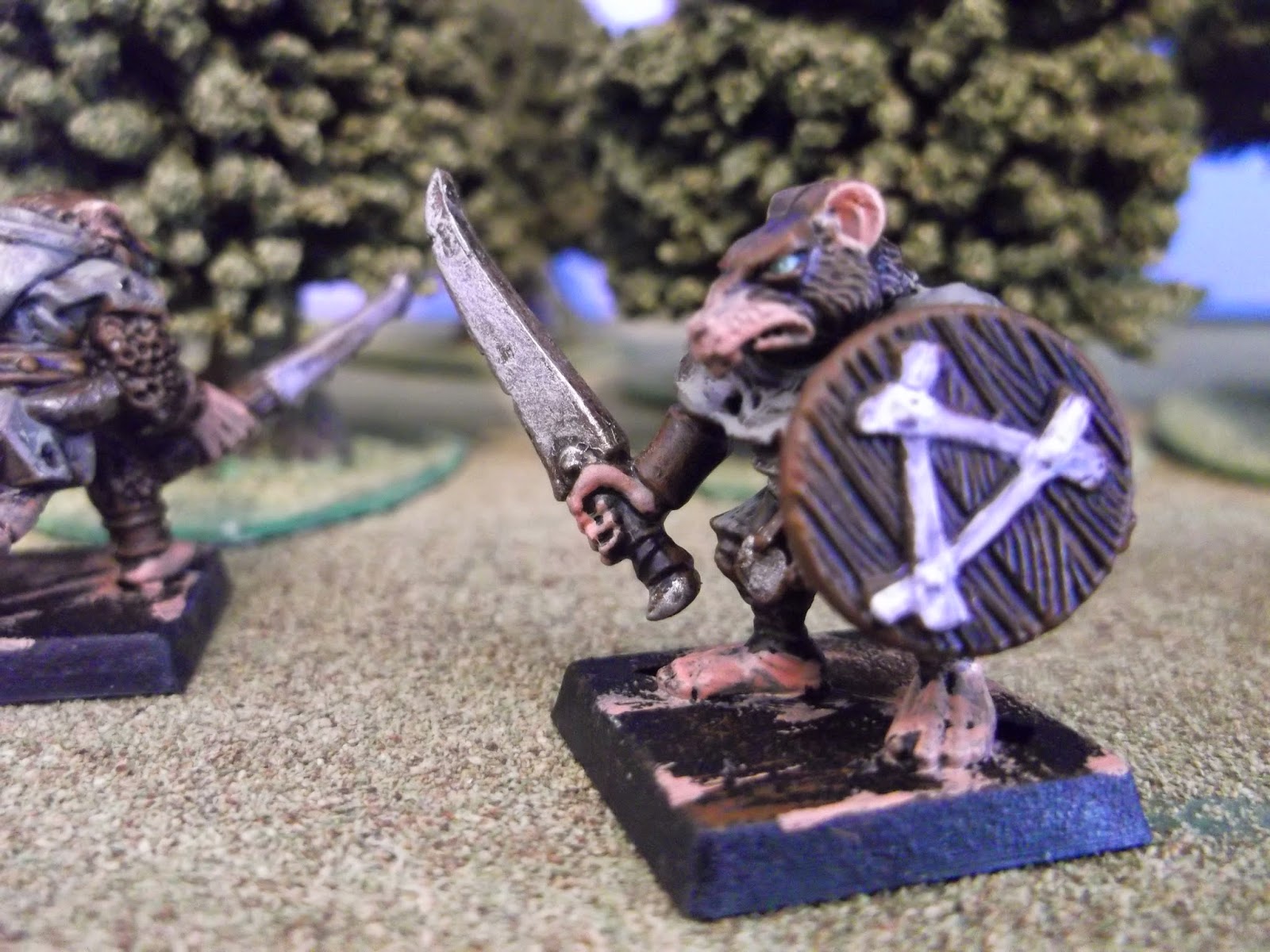 ...and black on the sword handle.
It's up to personal choice how much detail to do. I will be varing the colours of the pouches, and the cloth hoods as I go along to give variation and break up a too uniform look. I have found with other models I have painted (for example the Bretonnian Rascals) that is does'nt add too much extra painting time and adds variety. 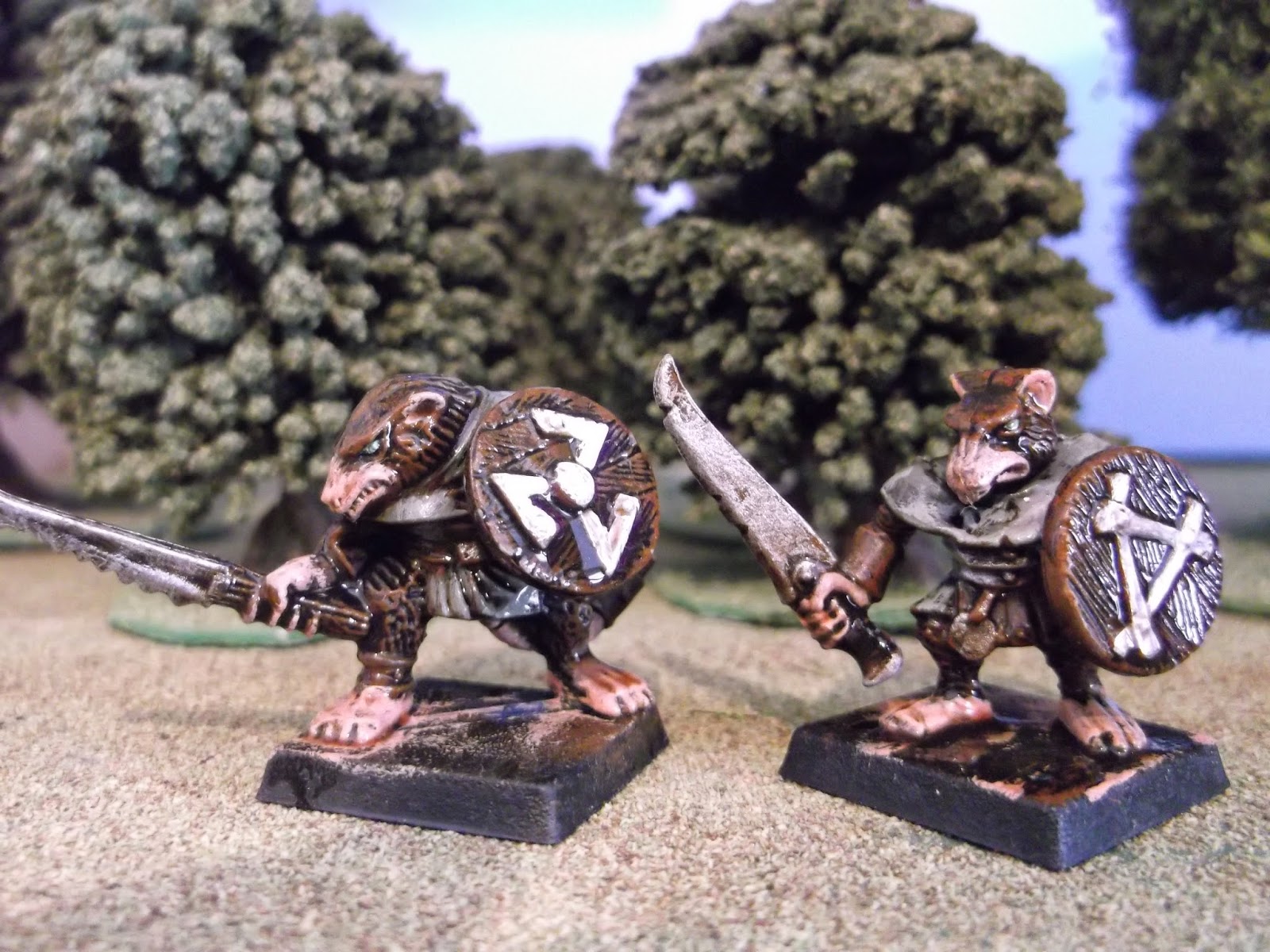 And finally stage Nine, ink wash.
I used Citadels Agrax Earthshade, but Armypainter or just watered downblack paint can work just as well. I however like Agrax. It ties all the elements of the drybrushing together and the shading allows the drybrushing to become the highlight. 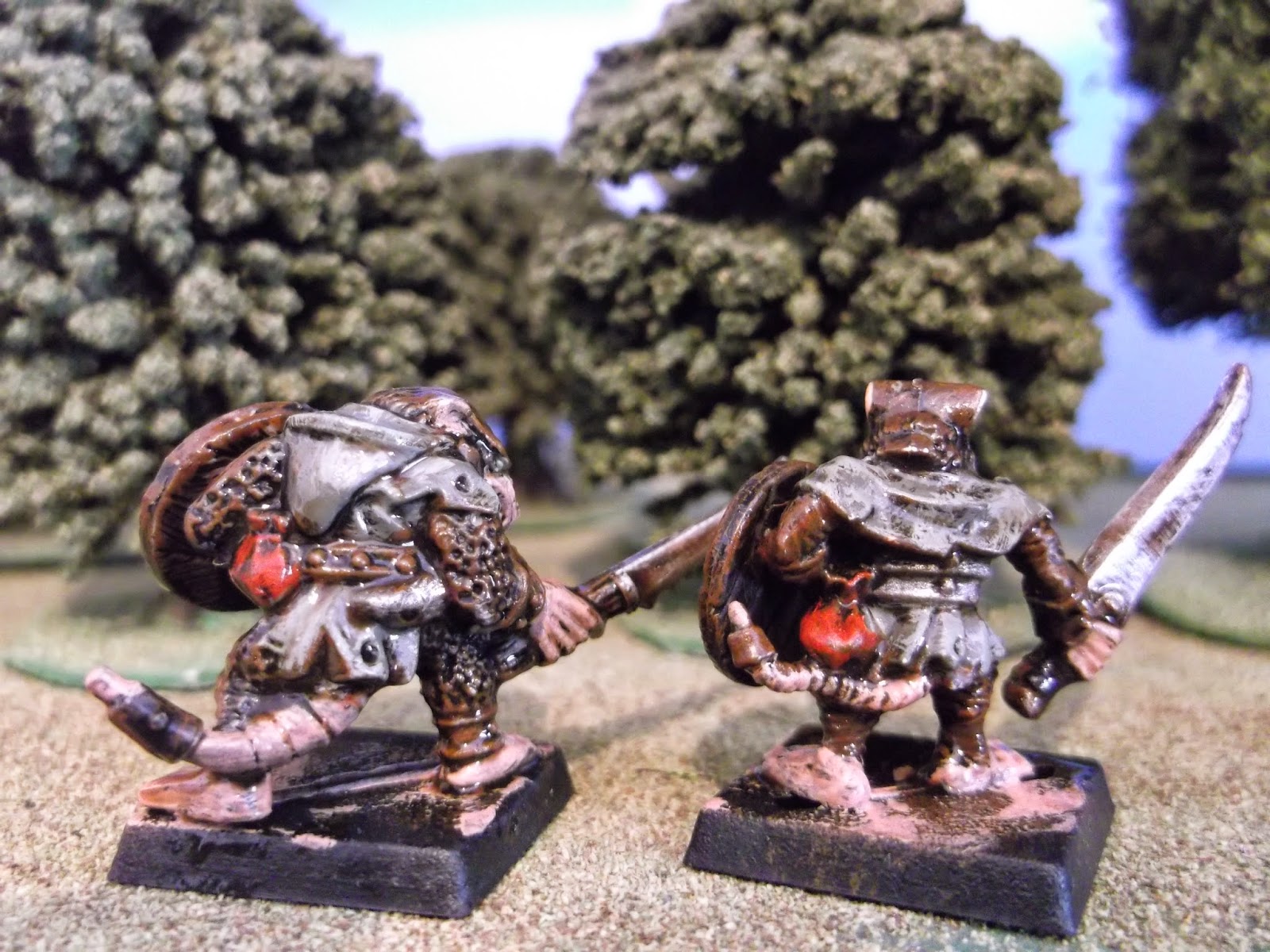 Rear view, and done. :)
Excluding the undercoating, each Skaven takes about 4 minitues to paint, which is helped when painting in batches as the paint has already dryed on the first one by the time you have completed that particular stage of the last one. 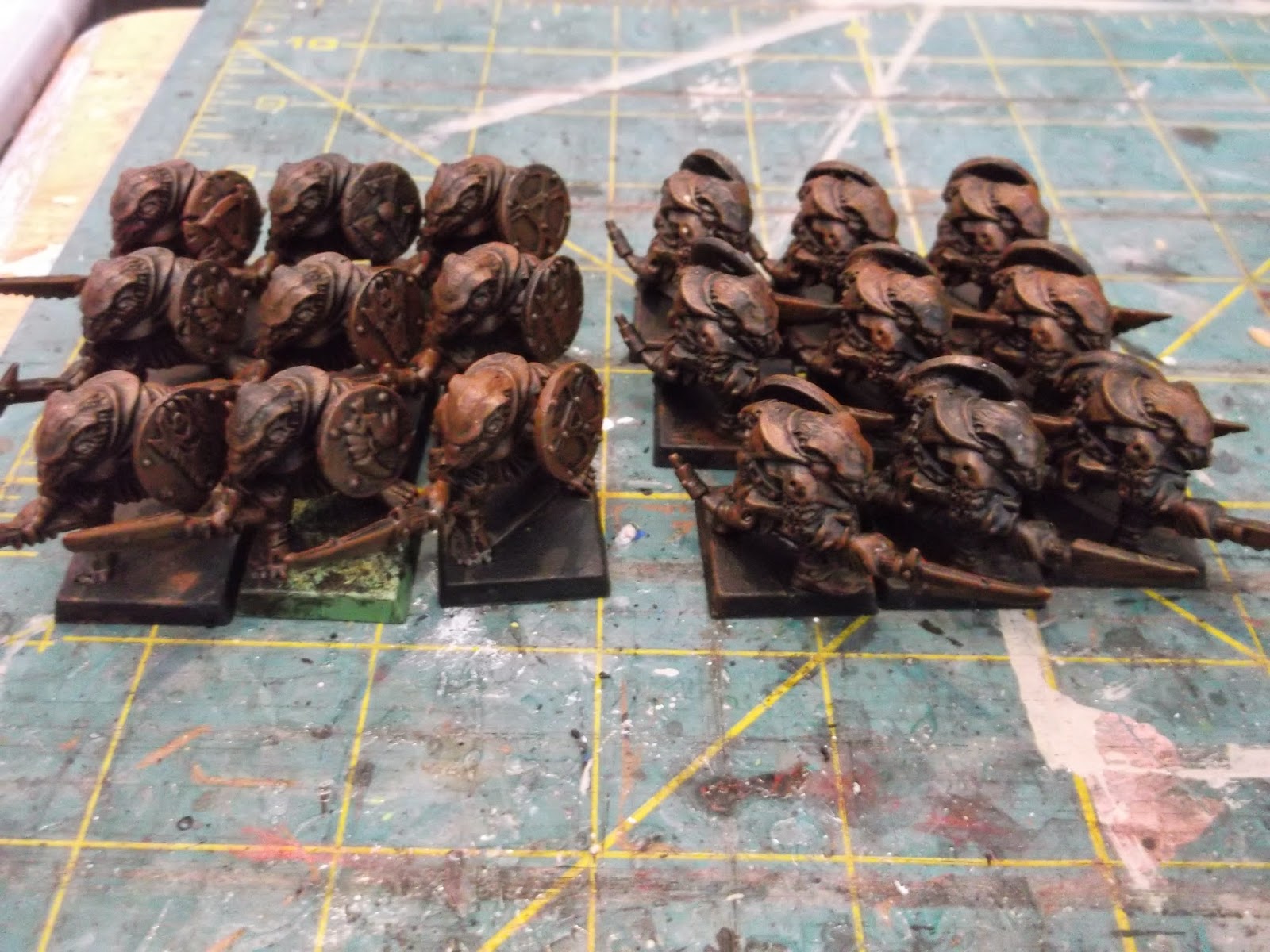 Ranking Heroquest Skaven.
The models were designed to be on 25mm round bases and not ranked up. The weapons are annoying as they are too large to properly fit together. The solution (as shown in White Dwarf #137) is to have half the regiment facing one way, and the other half the other way )I have seperated the two halves for the phtotograph). They don't 100% fit, but it is close enough not to worry about too much. Also, if they are on a movement tray they will keep together.
As the weapons are quite long I am considering counting them as spear armed Skaven. 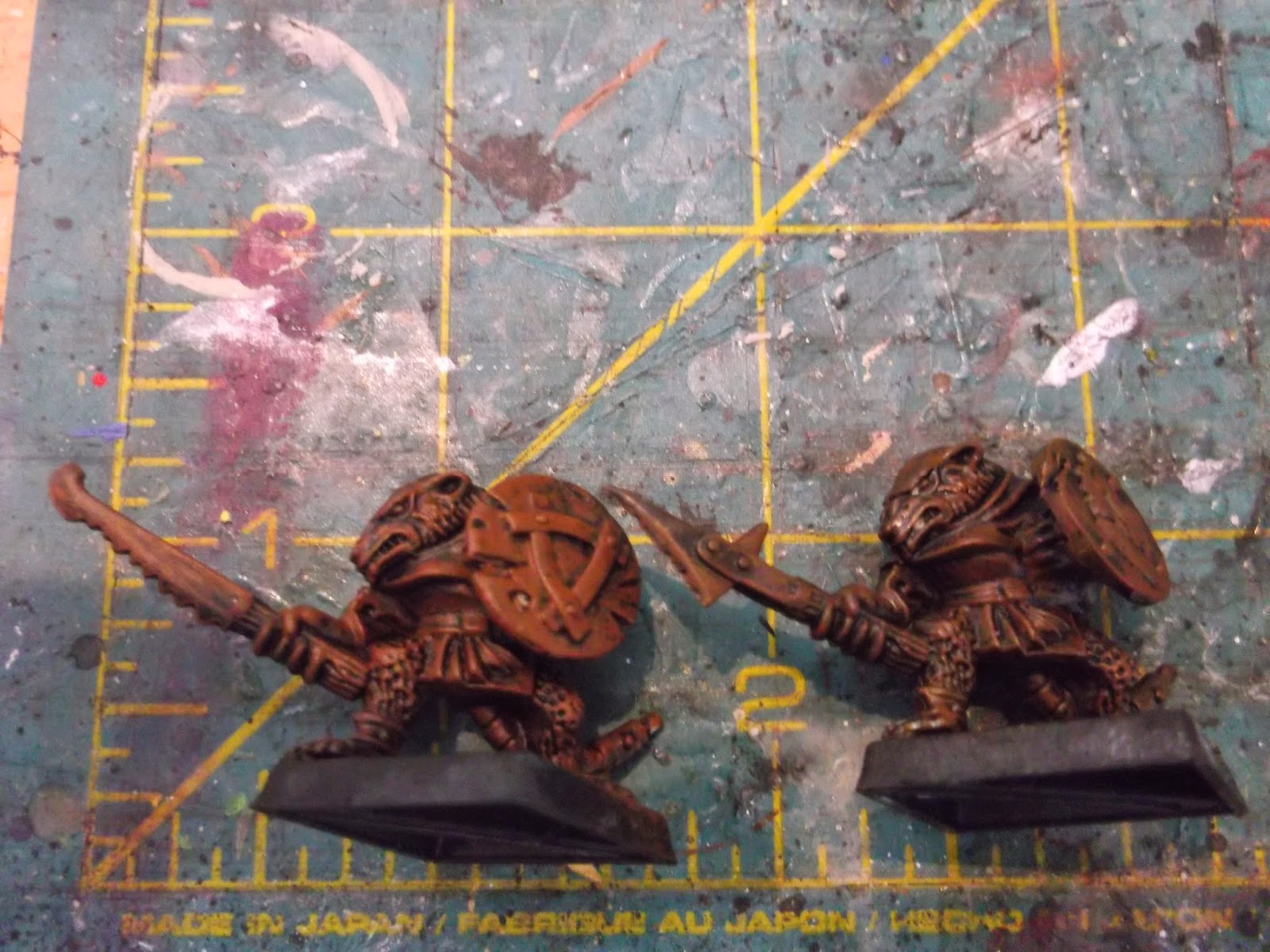 I would suggest the these two sculpts of Skaven are placed on the edges of the regiments as the weapons do stick out a lot. Of course they can always be converted with weapon swaps. 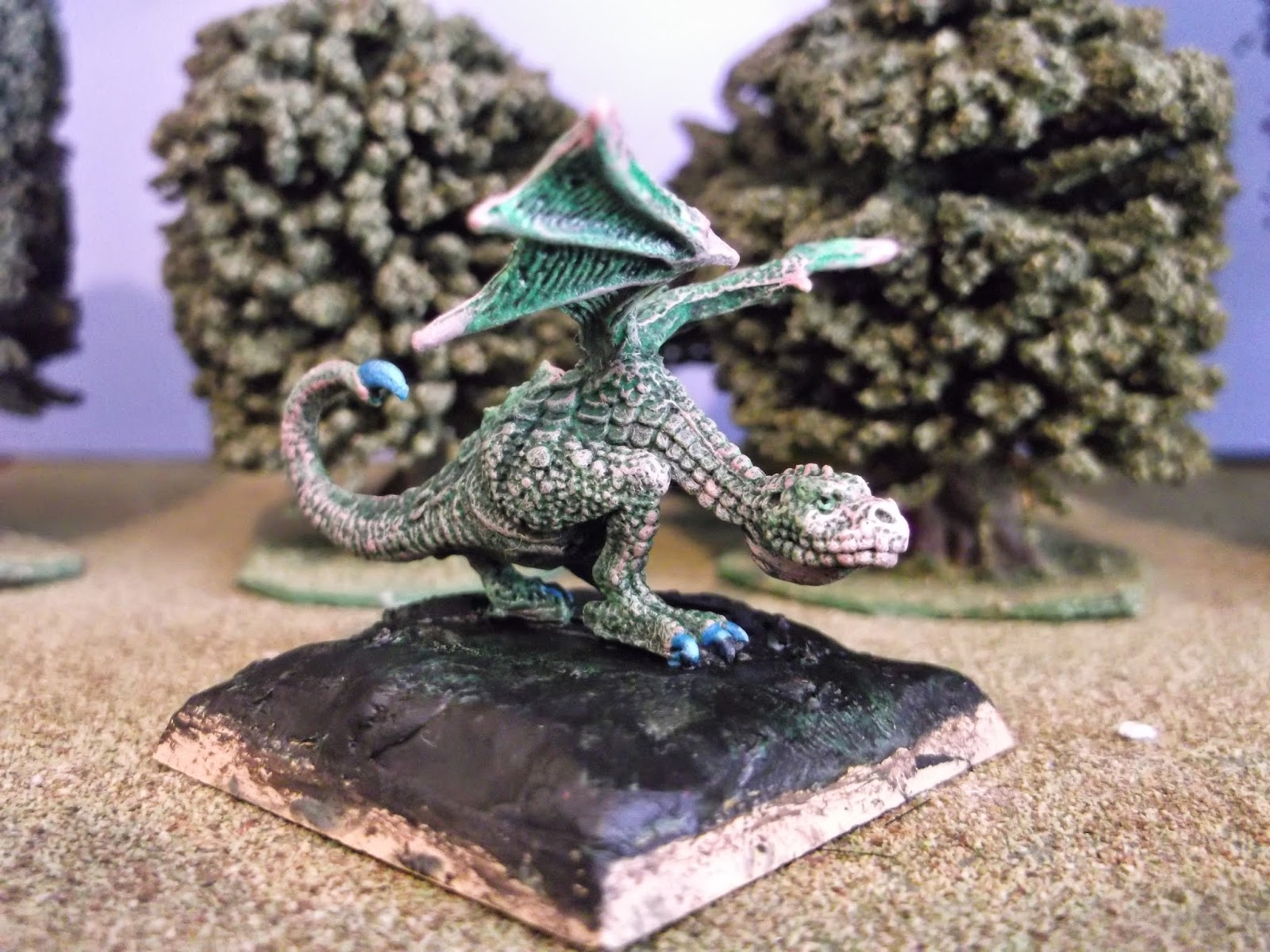 Wyvern.
I have started with the Fluorescent green on black undercoat and then highlight with a mix of green and white, and then a highlight of rose pink. Might tinker with the highlighting later and give him a green ink wash (or maybe yellow or red?). 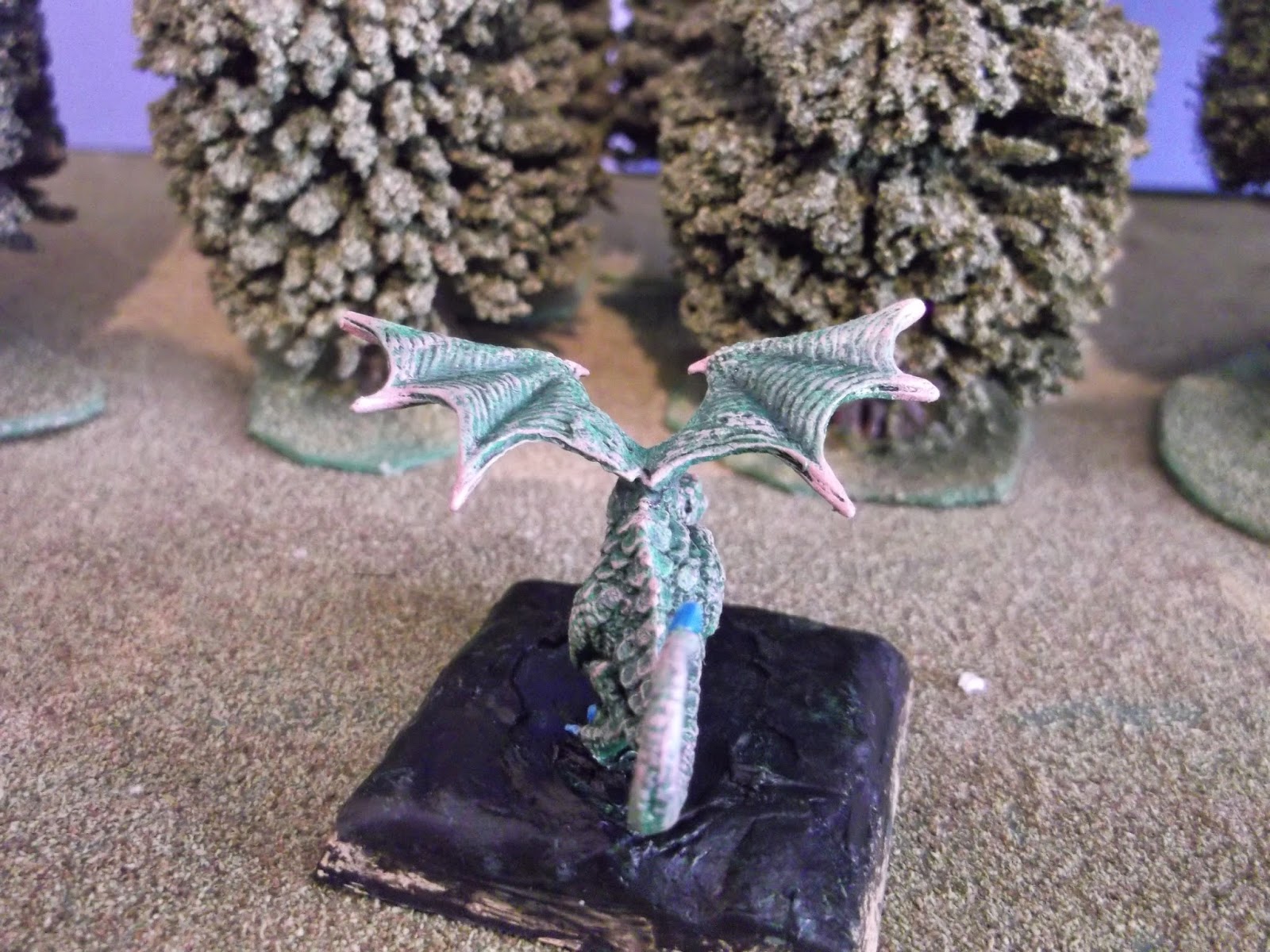 Heading for the trees!

Next blog update I should have some painted up Clanrats! :)
Posted by Goblin Lee at 15:43