Slann War Altar, Slann Spawn Bands, and a bit of Gnoll-ing about!

It's been a bitty week for painting. I am still working to complete the painting of the odd and ends of the Slann army ready for the 5,000 point encounter in mid September. At the start of the week I managed to paint the converted/scratch built Slann War Altar with Guards.

Mid week painting was slowed due to work, but I re-focused my time on the Gnolls/Great Goblins. With all this business with the Skaven, Nipponese, and Slann, I have'nt forgotten the Goblins. As I have been working a lot of overtime recently, I have been buying some more of the old FTG Fantasy Tribes/C12 Gnolls/ Great Goblins as I really do love the models, and if I see a stray Gnoll/Great Goblin (or two) on e-bay I feel they need a good home. In addition to buying the little critters, mid-week I have also been repairing broken ones I have bought over the years, although restoring them might be a better verb as I have been trying to repair any damage and return them to their original state rather than converting  them.

Later in the week and at the weekend it has been back to the Slann. I have been re/painting Slann Spawn Band models and tidying up thier general appearence. I have done this for 30 of them so far, with only 10 left to do. Concerning the Slann army this means I have 10 Warrior Priests also left to paint, 2 Jaguar Warriors, and then some varnishing and basing. As the battle is mid September I should be fine, and back to painting the Skaven in a couple of weeks at most.
Enjoy :) 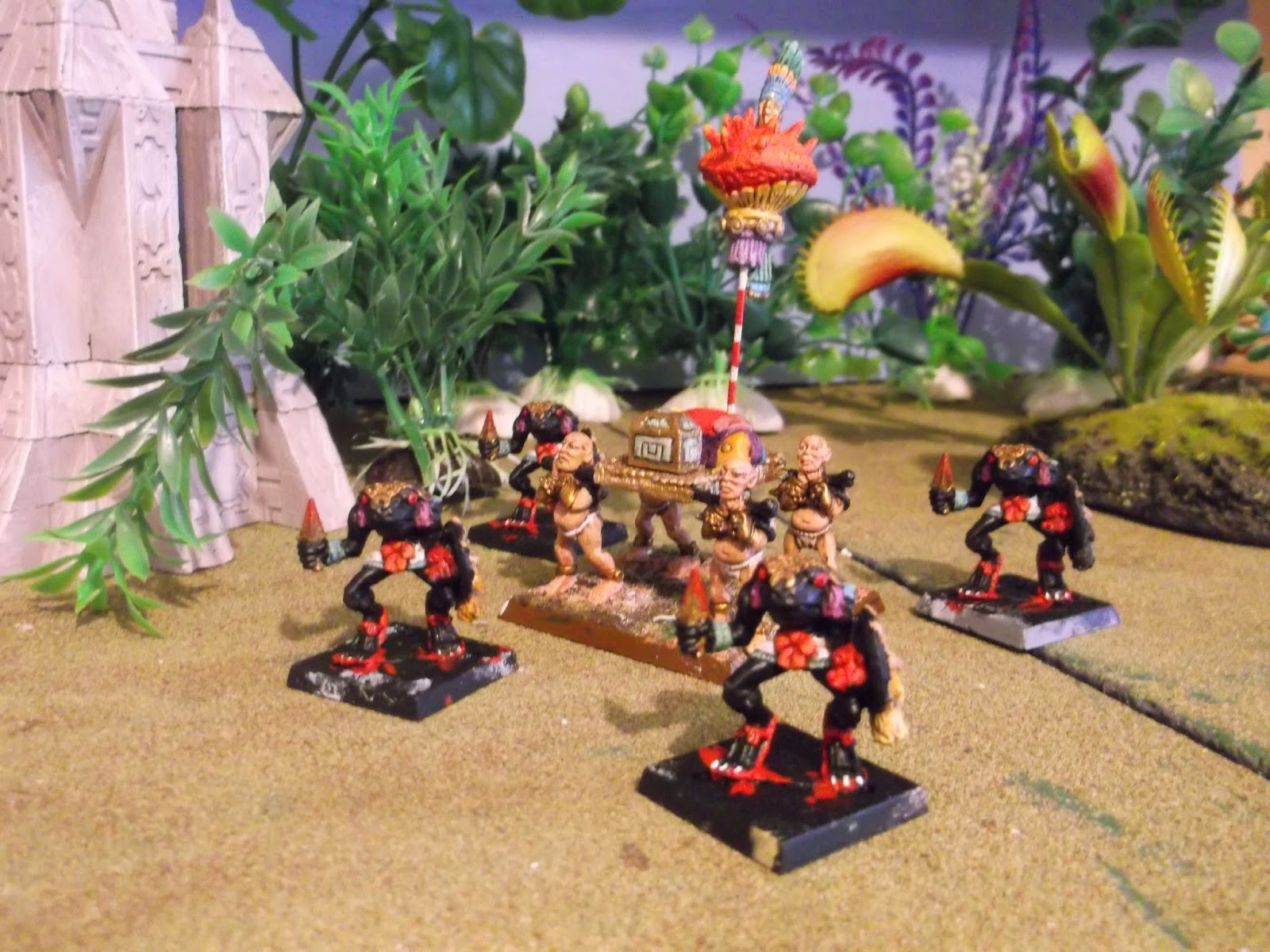 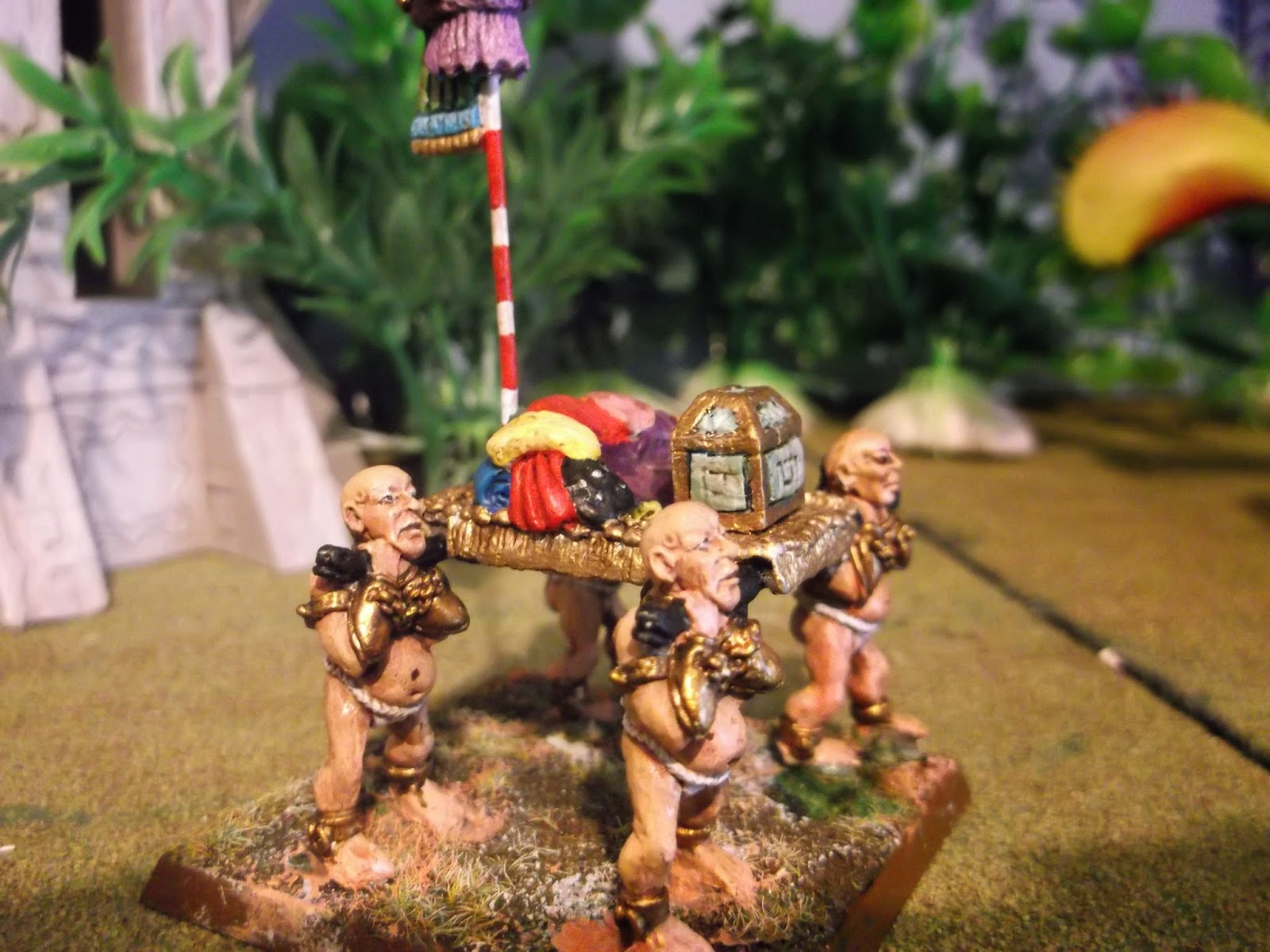 The War Altar itself is a normal Slann Wizard Palaquin with a C39 Treasure Chest placed on the front (I had to remove the little bowl of grapes from the front of the Palaquin), and then with an Outpost Wargames Aztect 'Fire Banner' on the back.
I painted the Palaquin gold to give the idea of a guilded platform for the chest, which I consider to have the magically charged remians of a long dead Slann Mage inside. 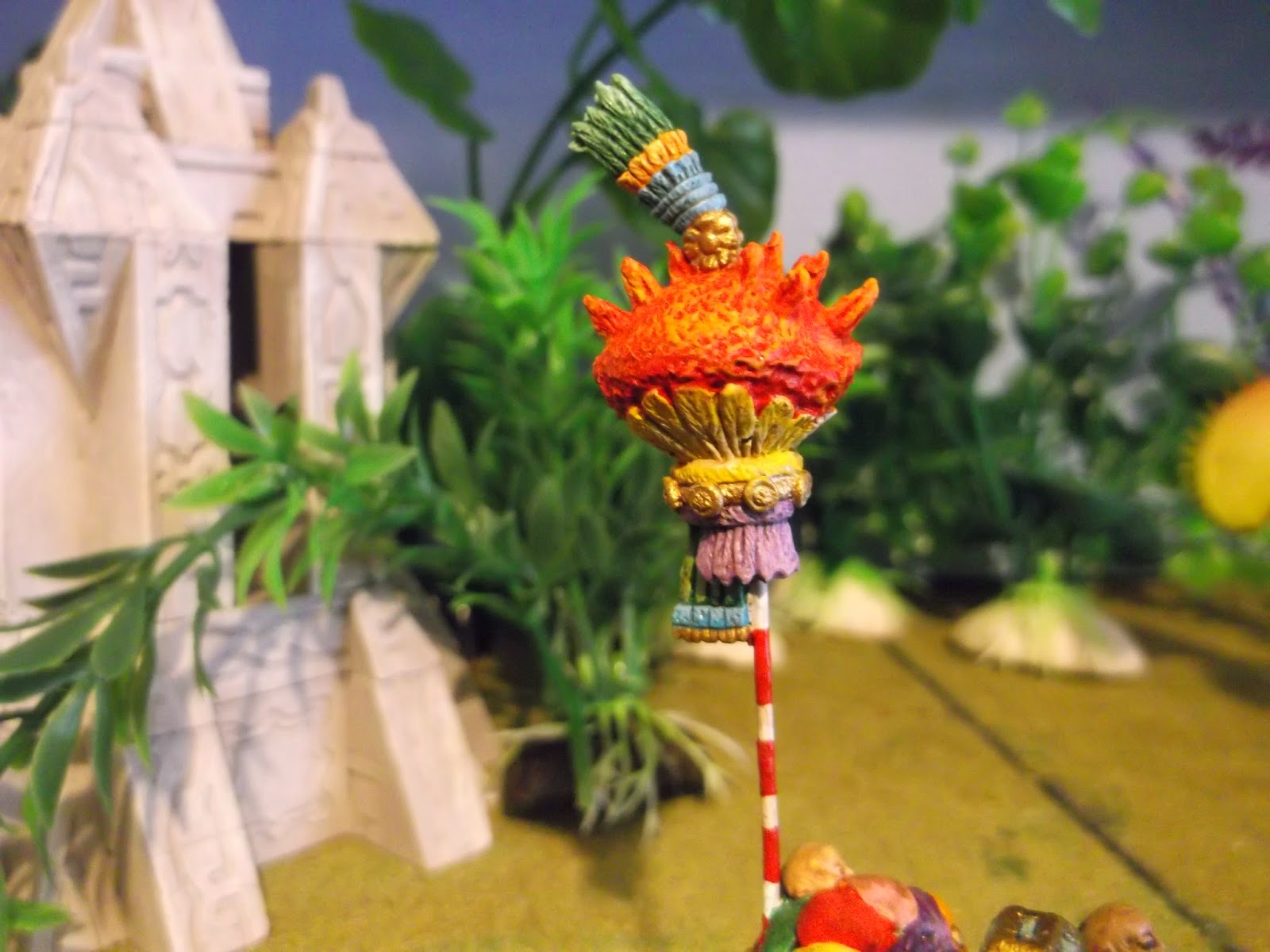 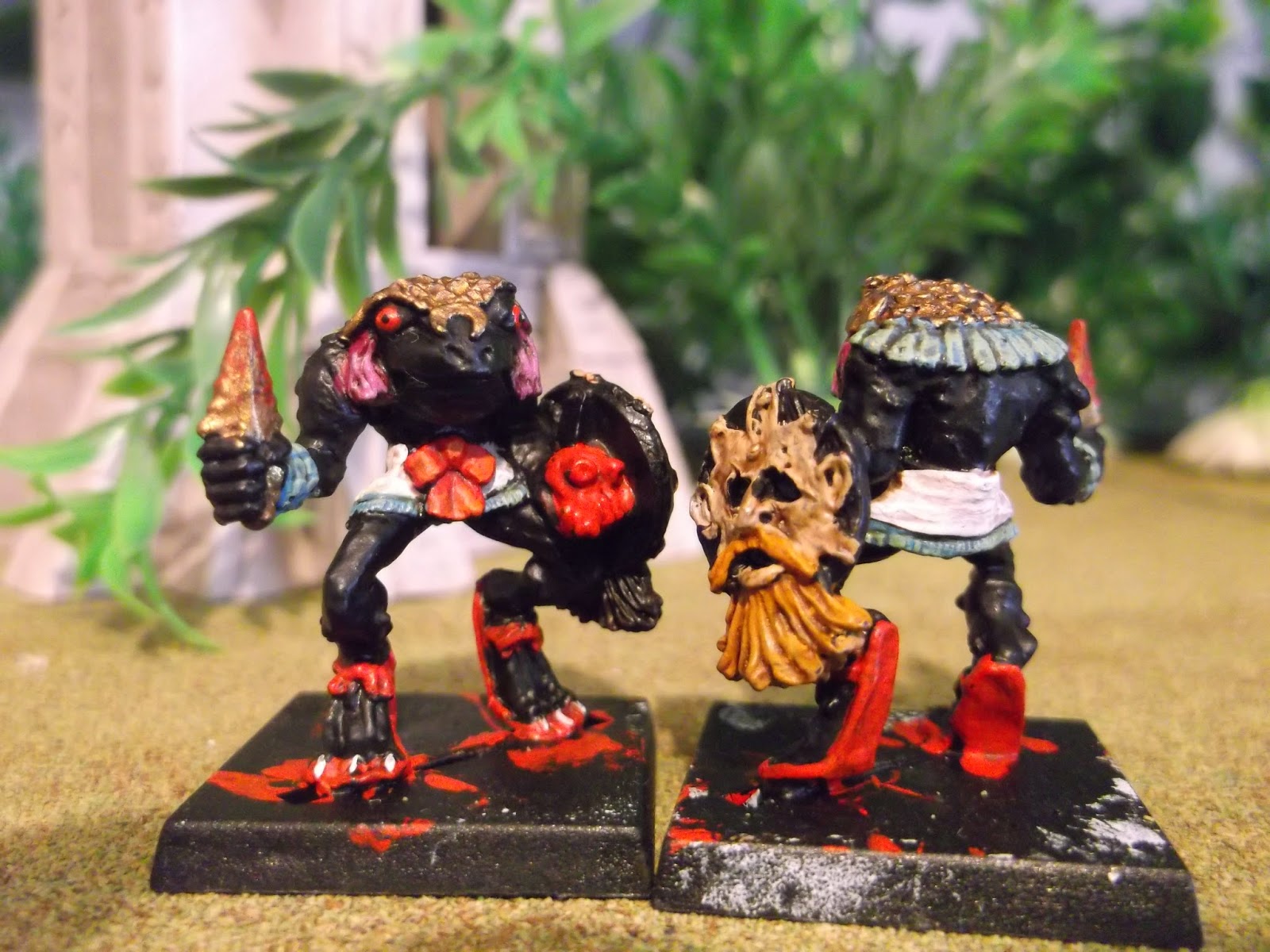 2 Warrior Priest Guards using the Slann model 'Lumholtz', and with the addition of a shield from Crooked Claw Miniatures Goblin range, complete with a flayed Dwarf face! 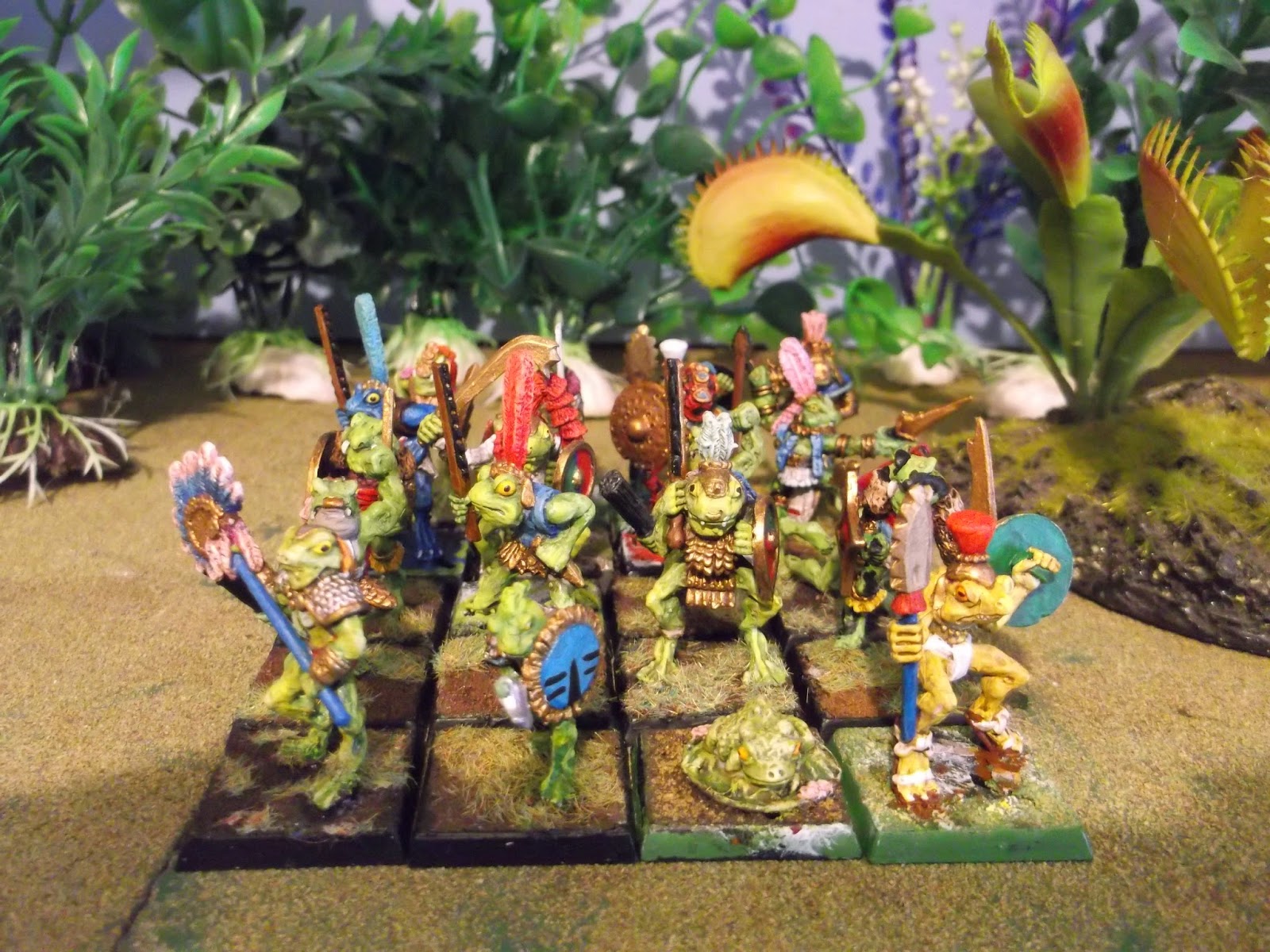 20 Spawn Band Slann.
The Spawn bands are the normal profiled Slann in any army, and the only compulsory part of the Slann army in Warhammer Armies. Background wise they are a miltia, and so I have tried to use a varied selction of models, skin tones, and paint schemes to relfect a greater degree of individuality.
What follows are a selection of a few of them: 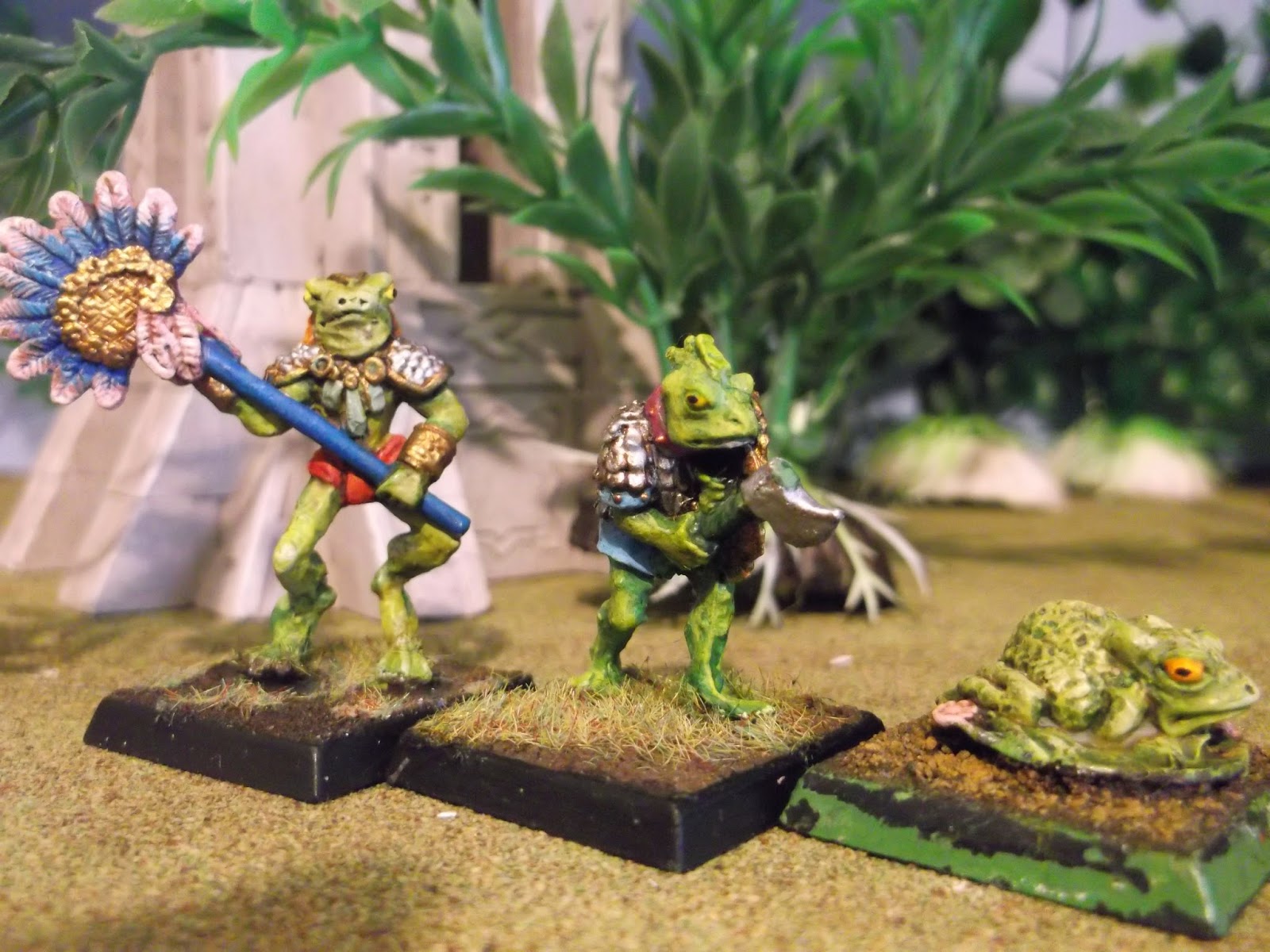 Left to right, Slann standard bearer (made using a fan bearer from the Slann Wizard Palaquin set); the regimental leader using the Slann Warrior from the Magnificent Sven Scenario range; and a Talsiman Toad as a stand-in Musician model. 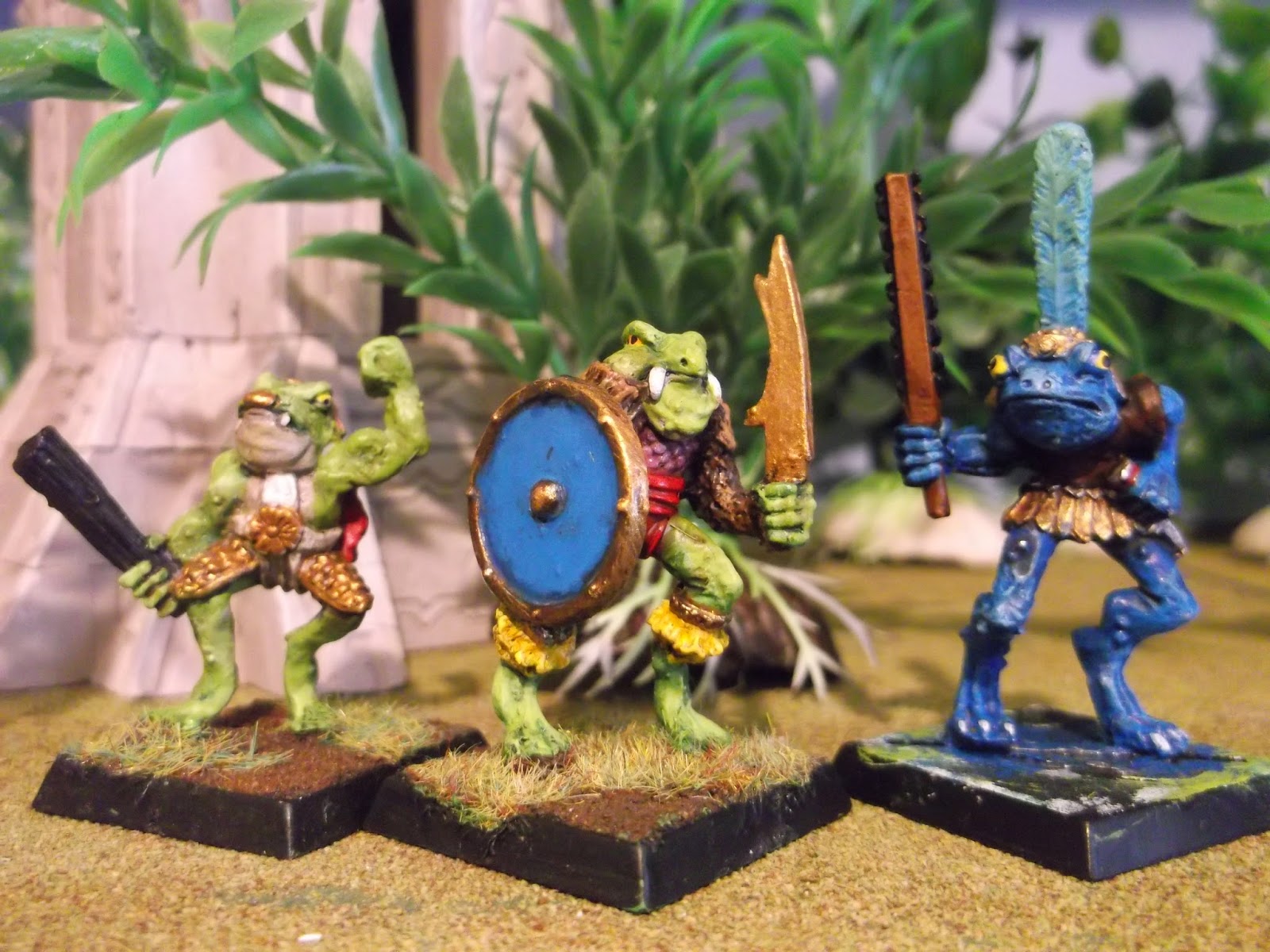 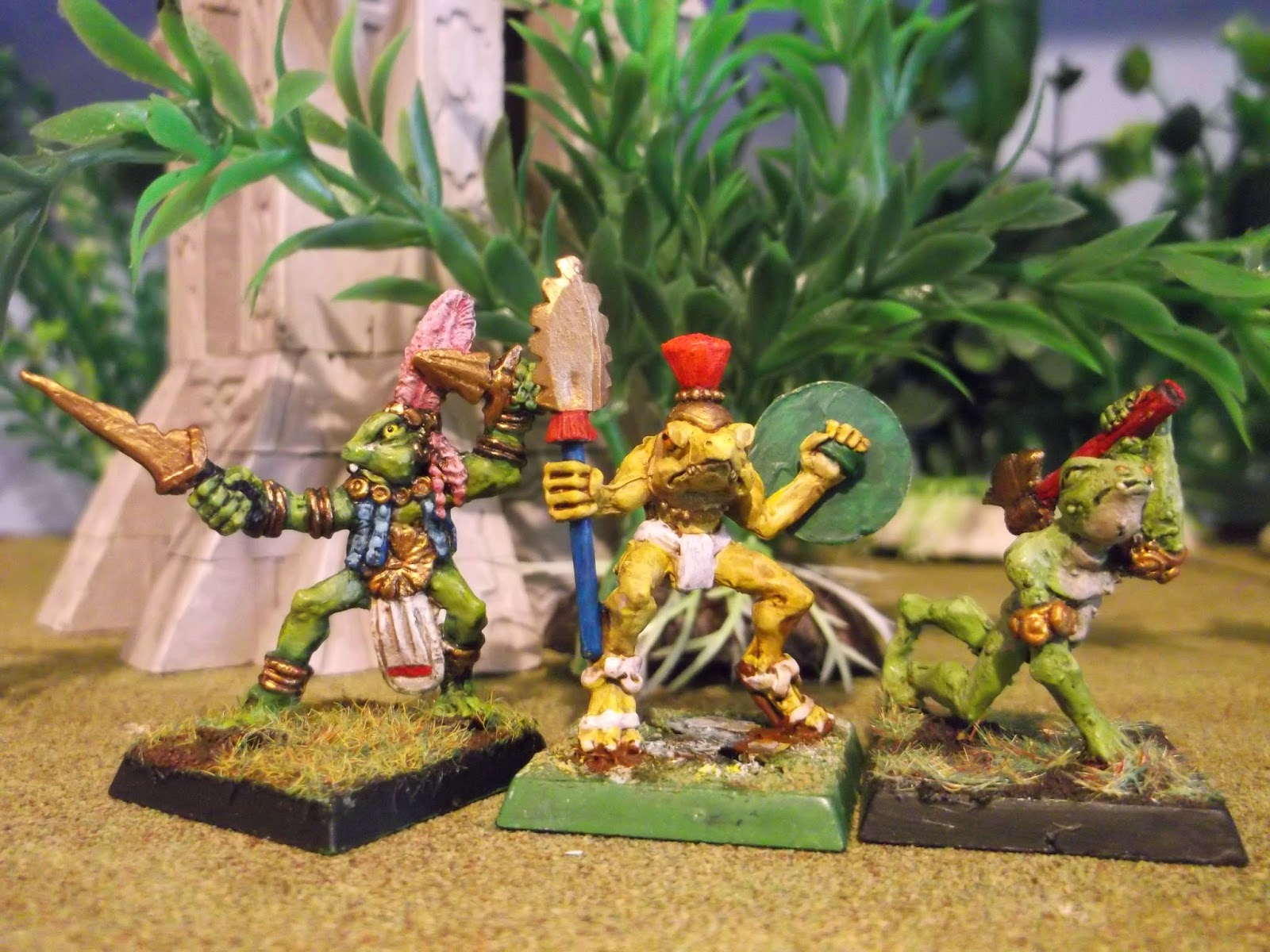 'Cuppacocoa', 'Quinine', and 'Lep'nluni'. I never noticed the casting line on Quinine until the blog update, so I shall fix that asap. 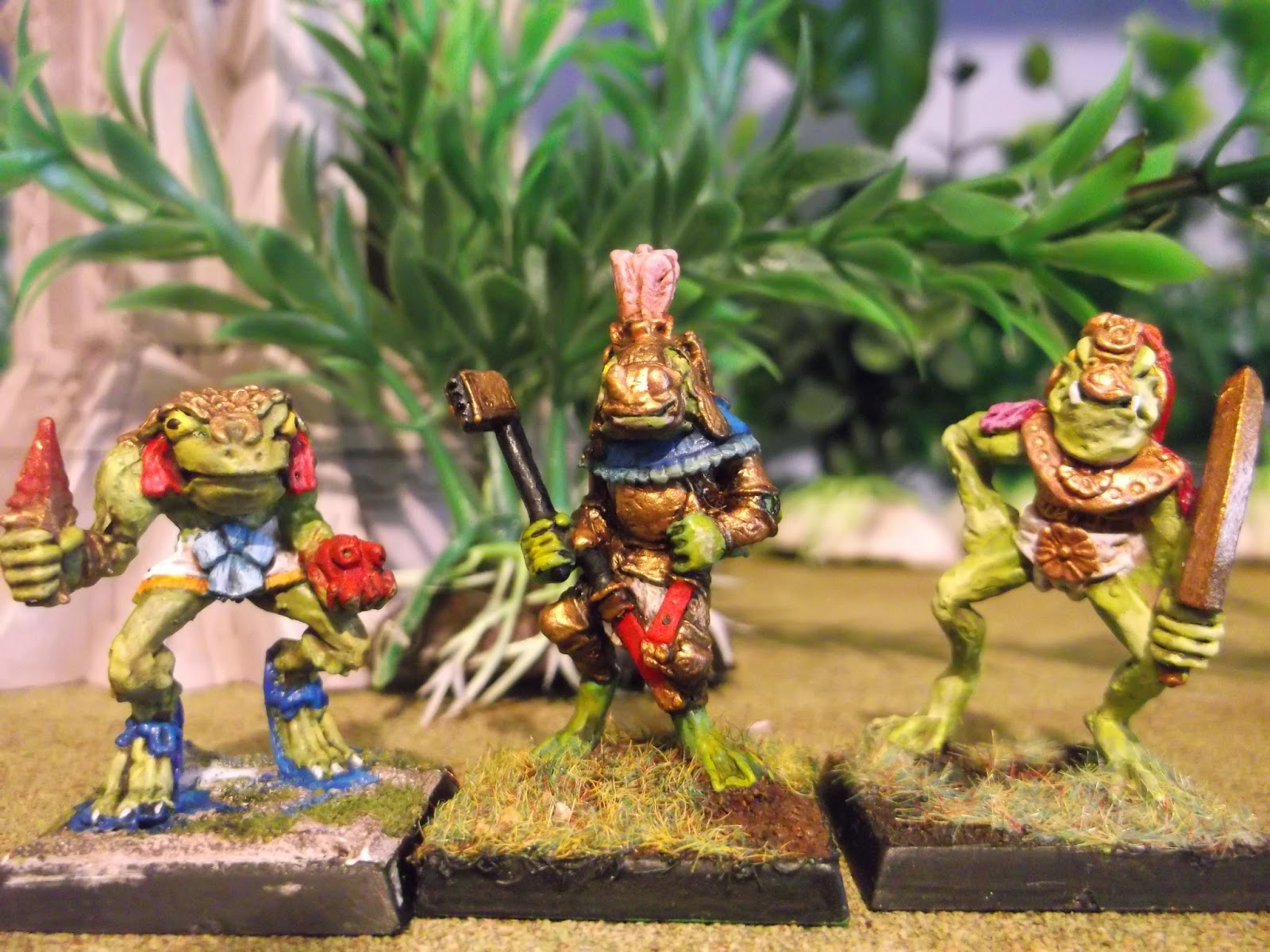 A 'Lumholtz' model without an added shield, a solid based C32 'Herald', and 'Nanuazin'. 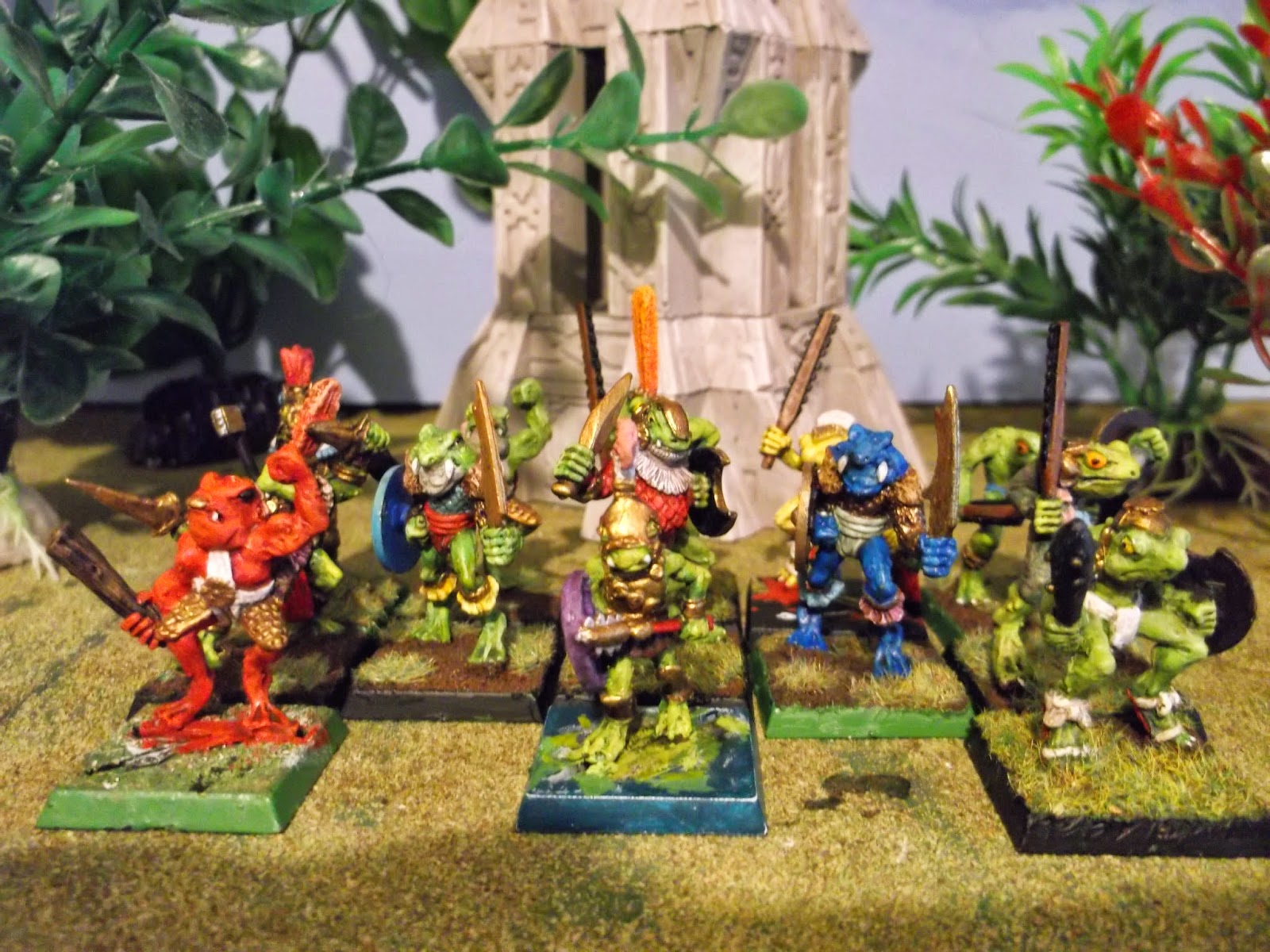 The second Regiment of Spawn Band so far. 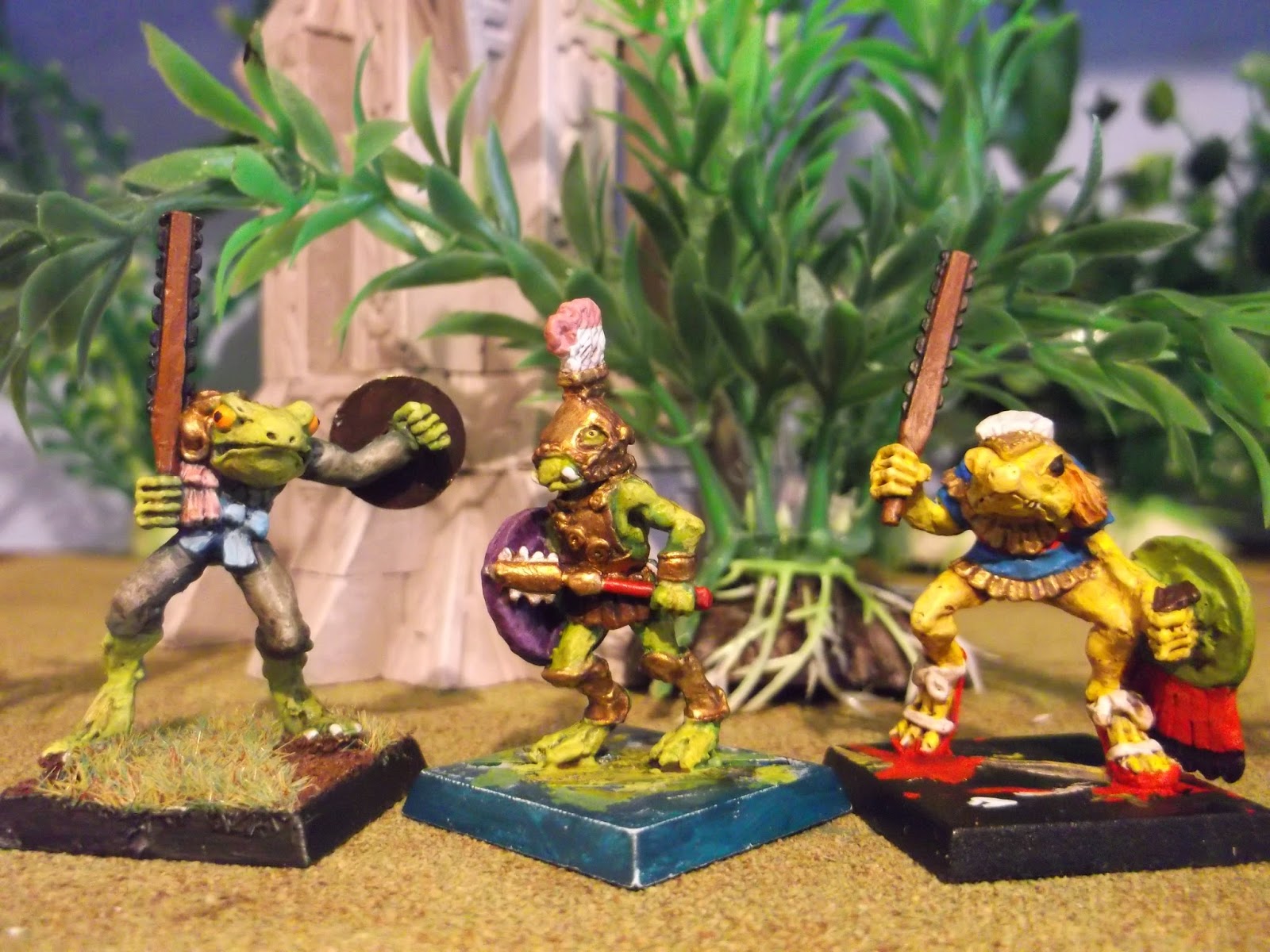 'Huastecan',one of the Lieutenant's from the Magnificent Sven Scenario range, and 'Hacienda'. With a name like Hacienda he should own a club ;) . 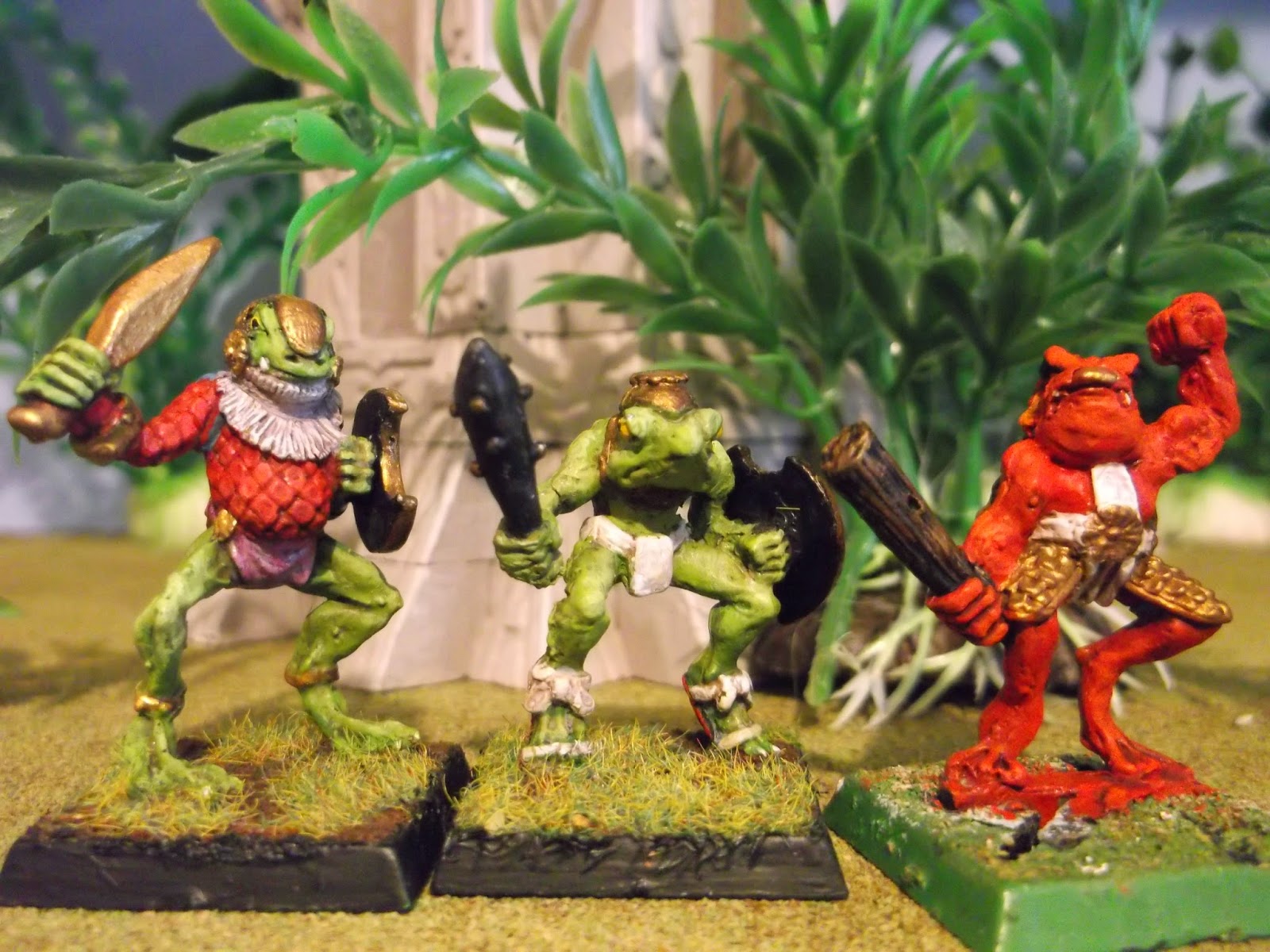 'Toltec', a converted 'Quinine' model, and a bright red unlisted Slann with club. 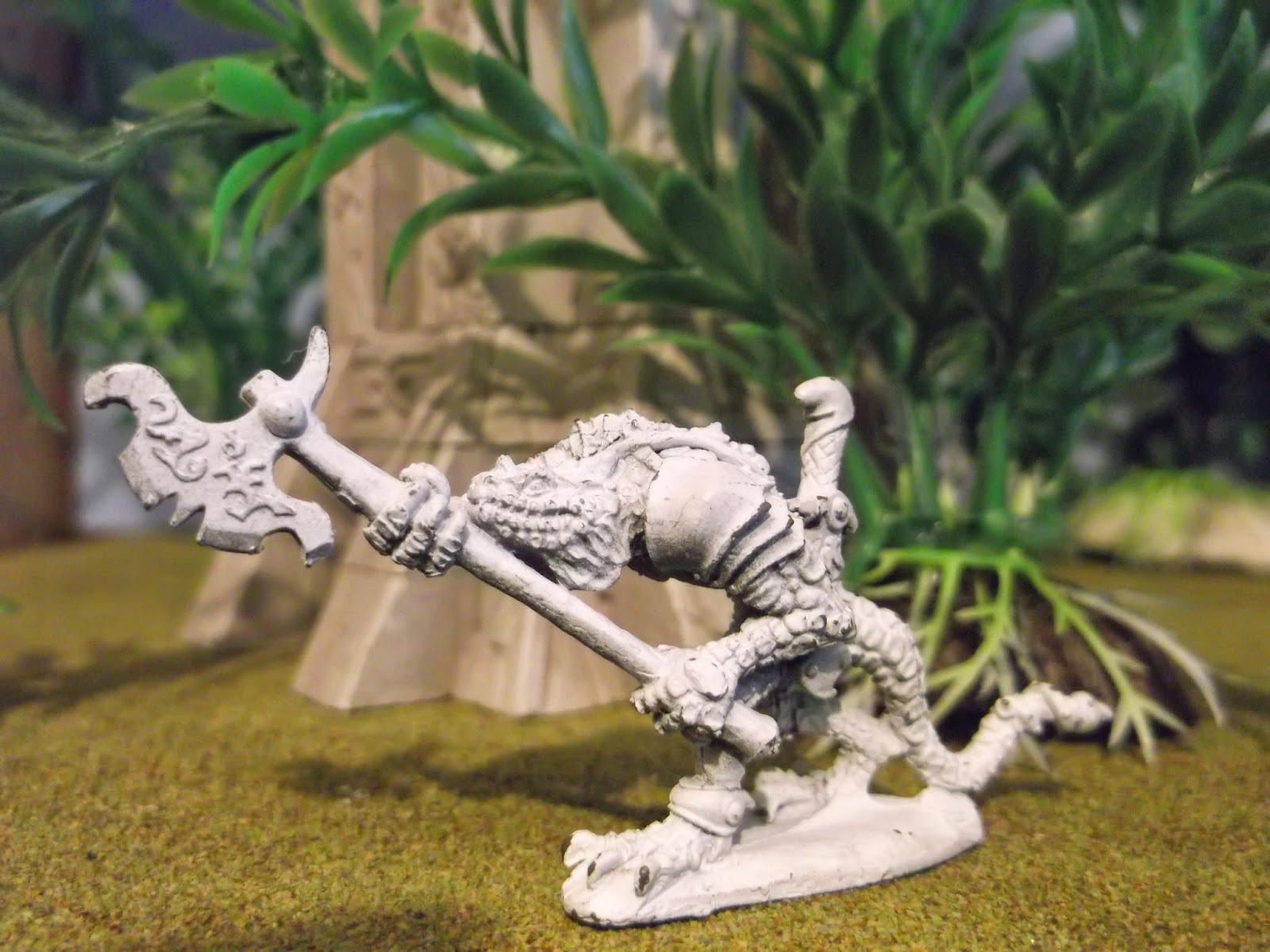 Before I get to the Gnolls I manged to buy another one of Tom Meier's awesome CP3 Troglodytes, 'Troglodyte with Halberd'. It is a beautifully detailed model, the runes of the halberd are excellent, as is the lizard grin of the Troglodyte itself.
I only have one left to find now. 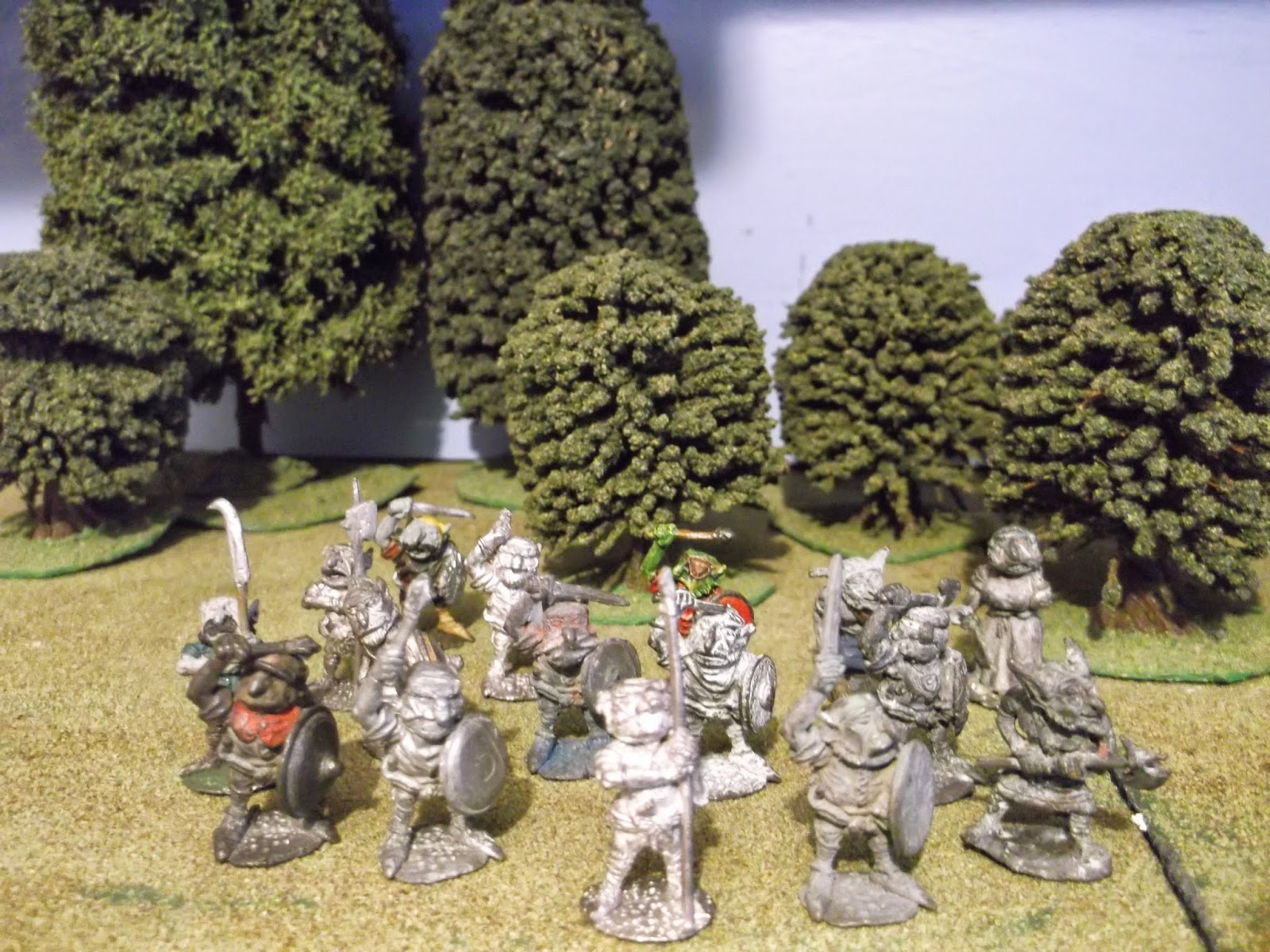 Gnoll/Great Goblins infantry.
These are not all of the ones I have aquired from e-bay, only the ones I did'nt have. I have bought about the same again in number of doubles (and triples!). I have managed to bang a few bargins recently, as well as paying a little more for the odd one or two here and there.
It would be insane to try to collect all of them as it is not known how many variants there are, and some of them go for a pretty penny now a days! I am happy to collect the range as I go, and in a way in which I am not paying a crazy amount for each one.
I love the miniautres range, and that's the reason I collect them. :) 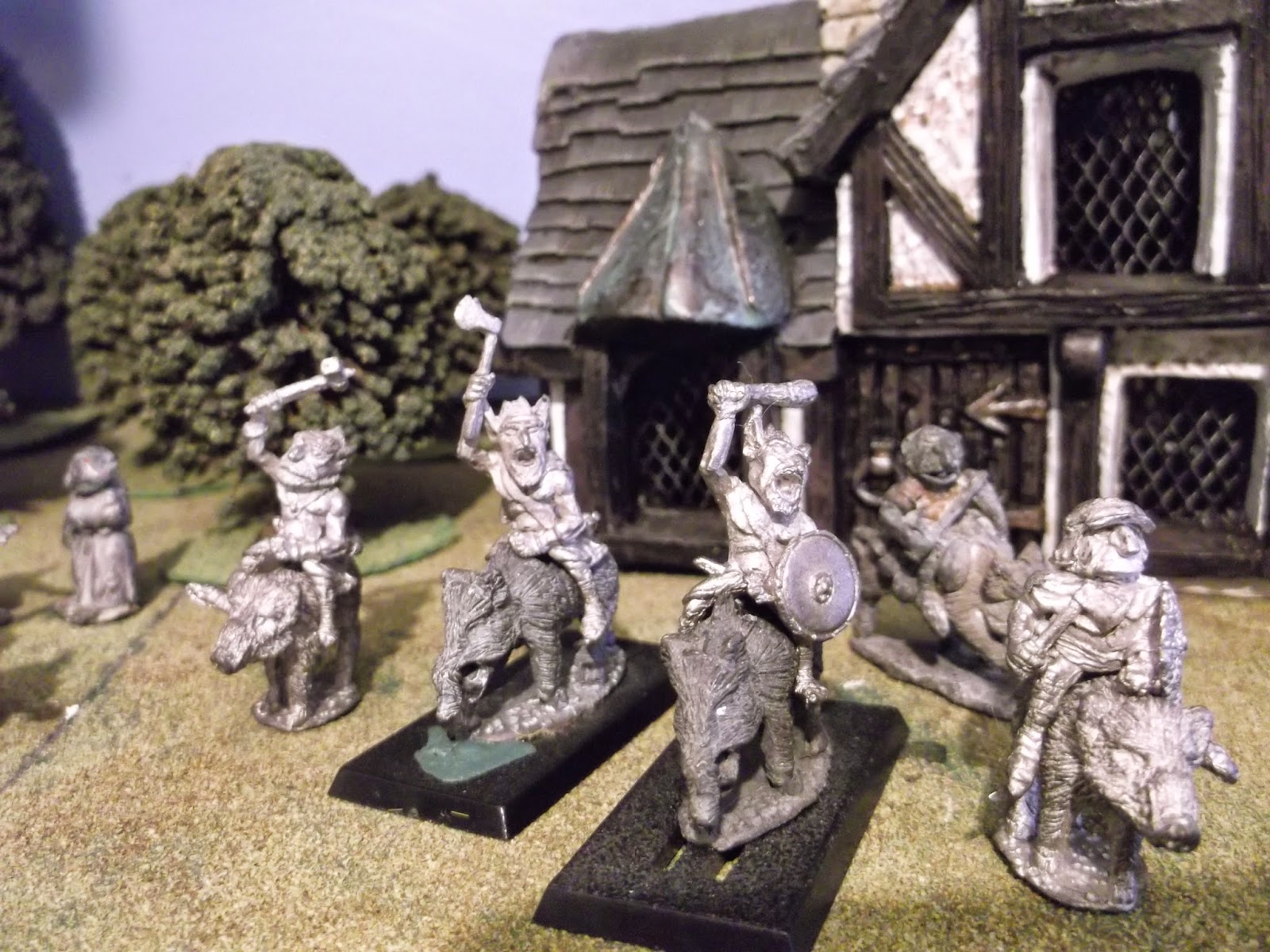 Newly bought Boar rider variants which I had'nt owned before. I have also aquired a couple more doubles as well, bringing the total number of Boar riders up to 20.
For the Boars I am using both the 'running open mouthed version', and the 'standing closed mouthed version'. 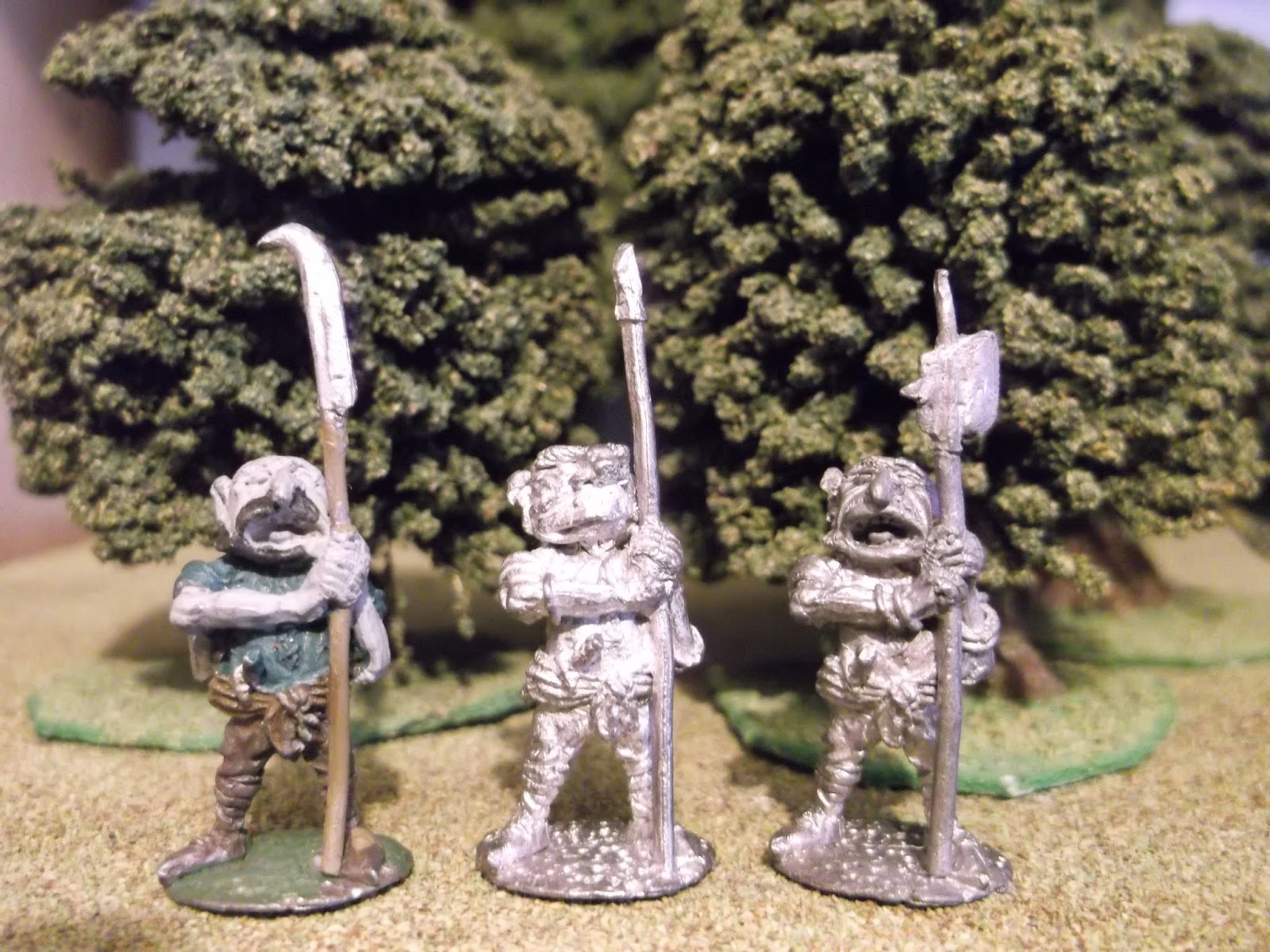 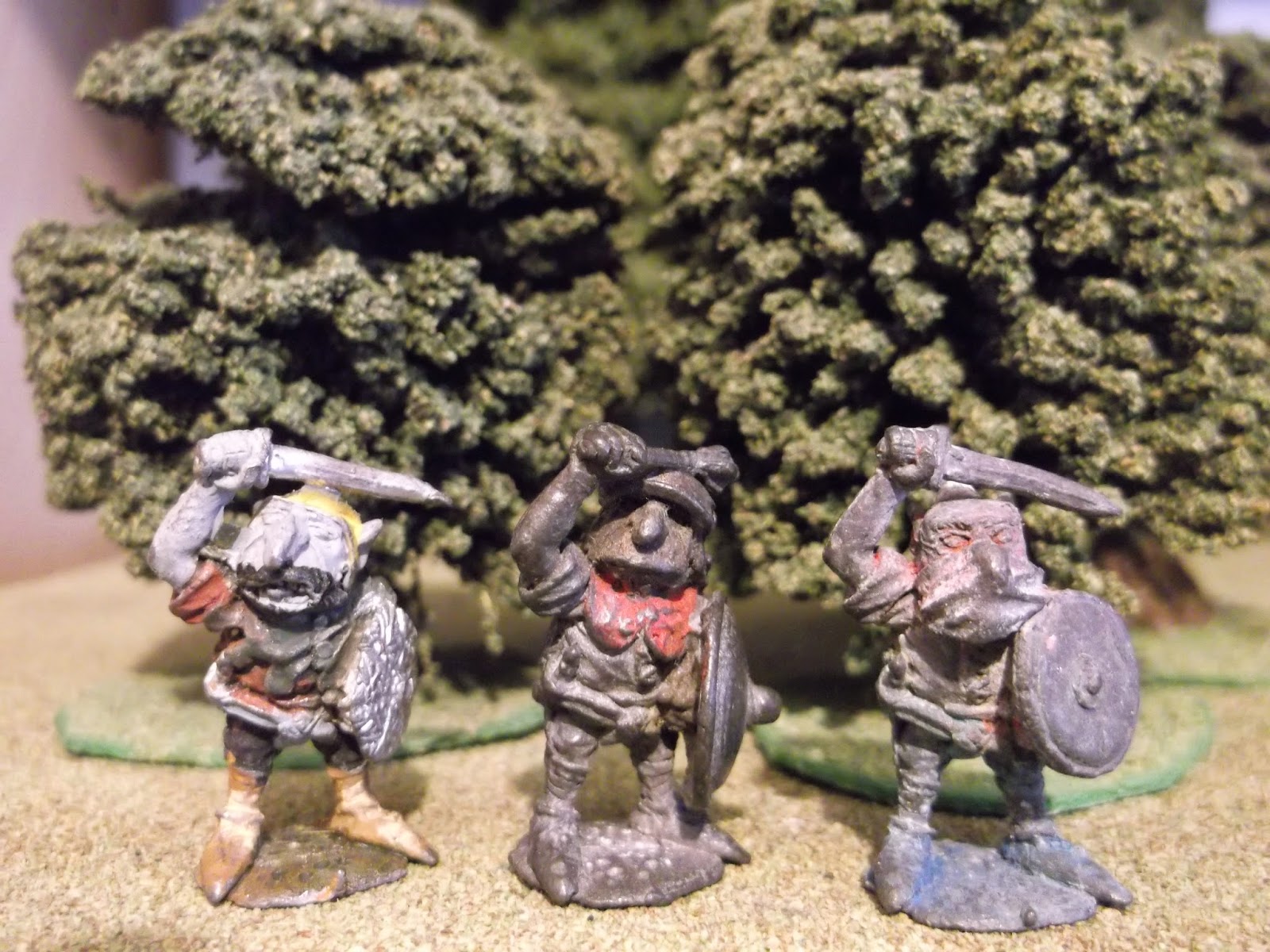 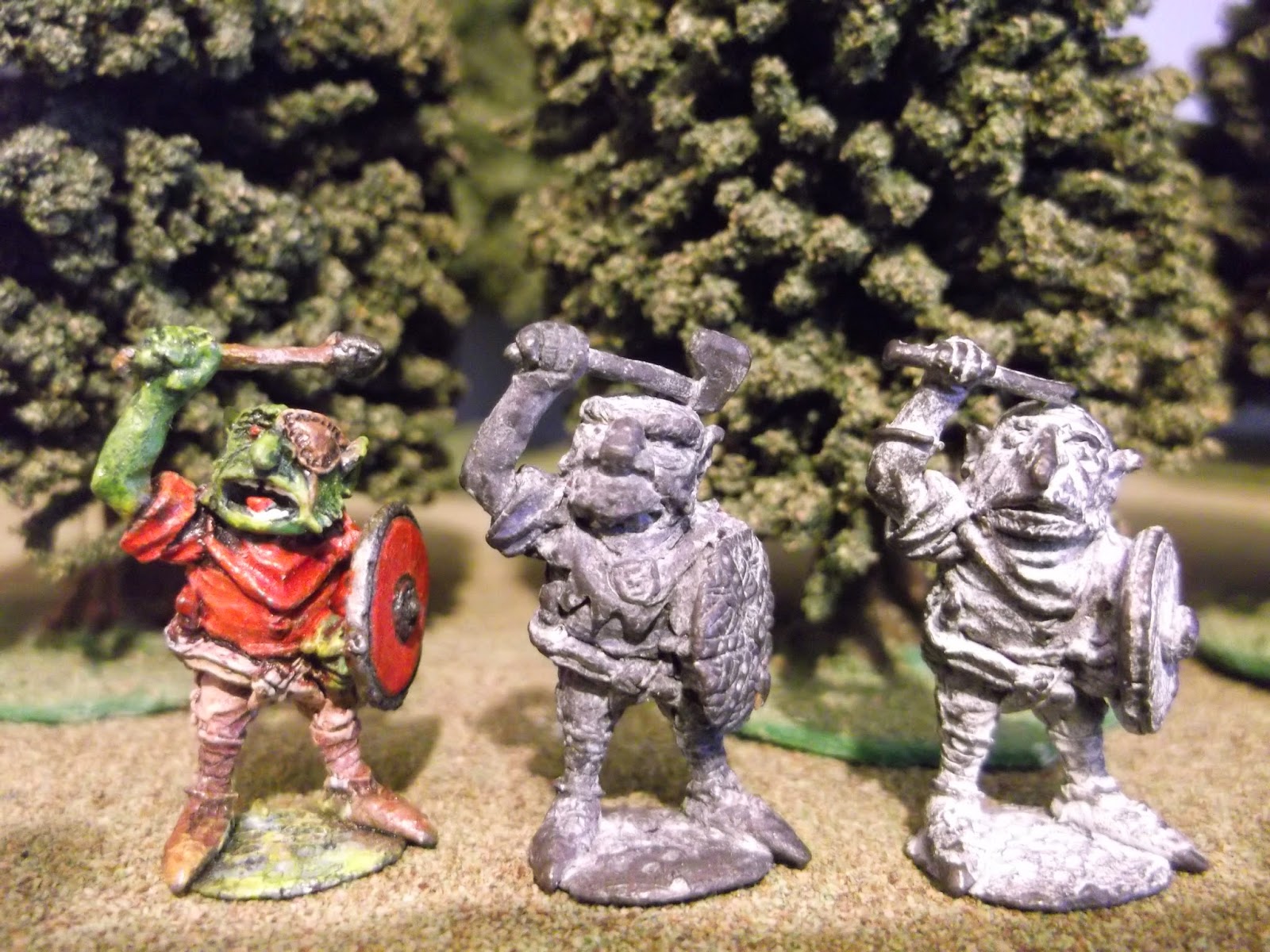 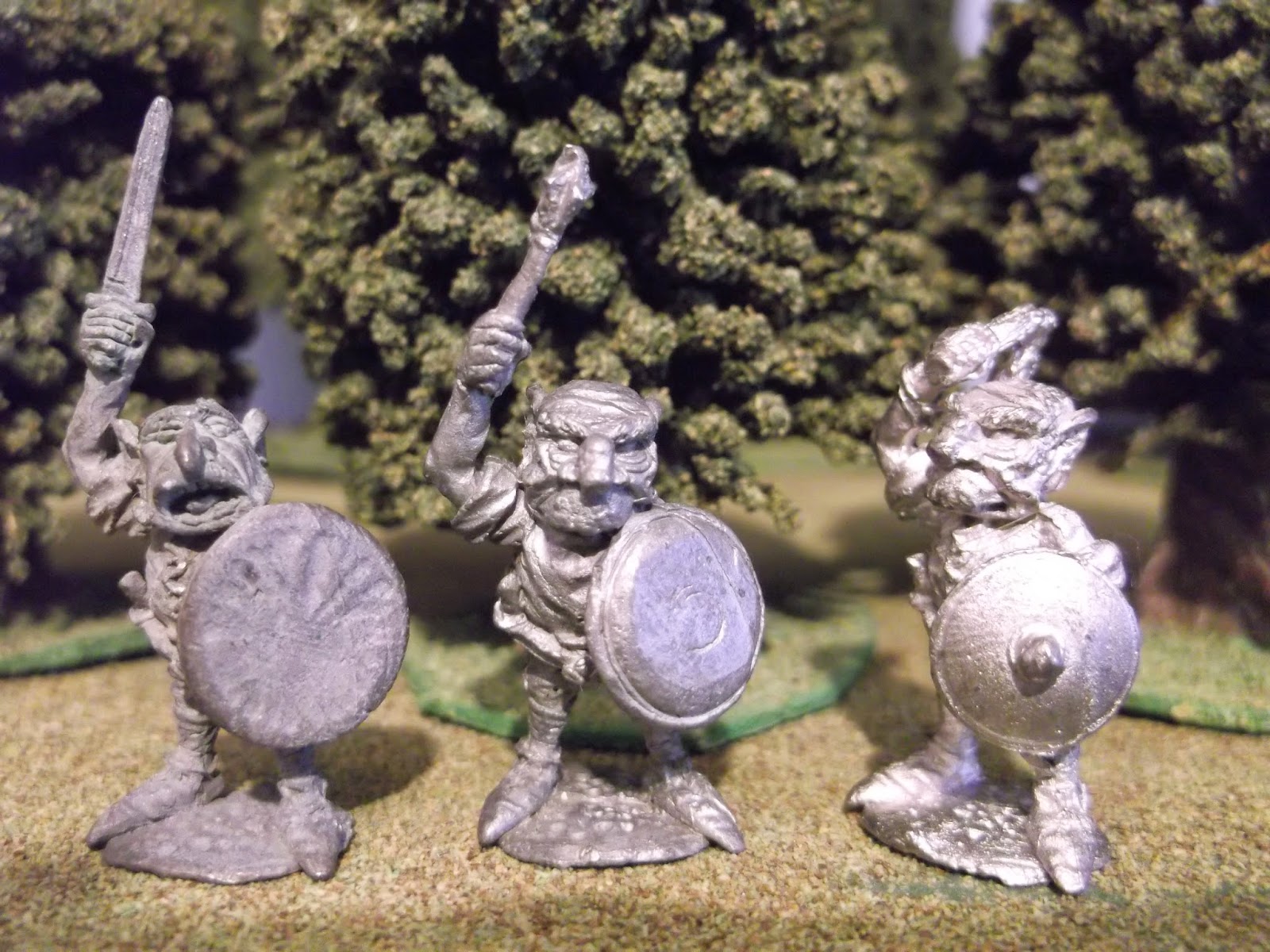 ...and yet more  FTG2 Gnolls/Great Goblins attacking with hand weapons. 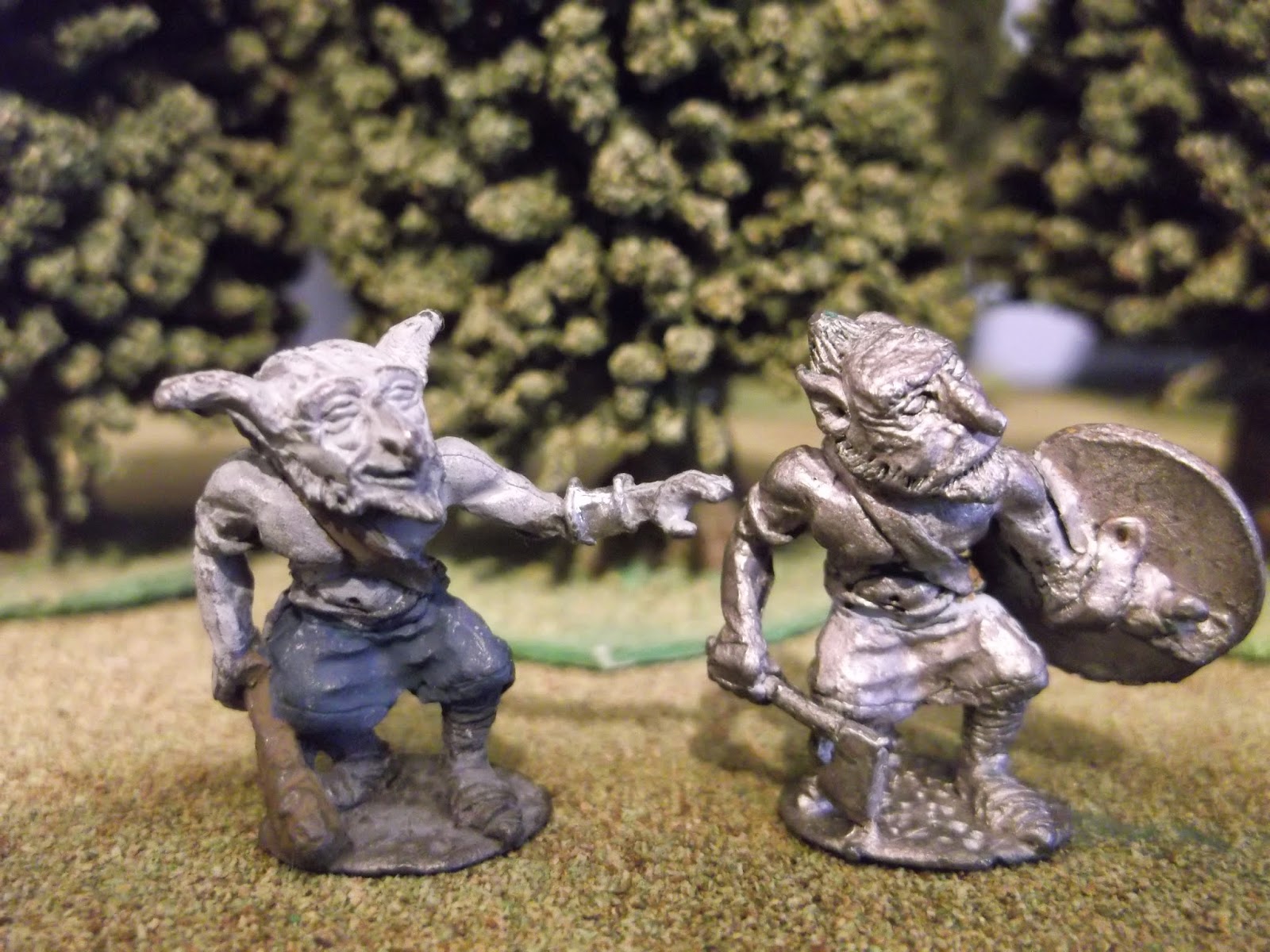 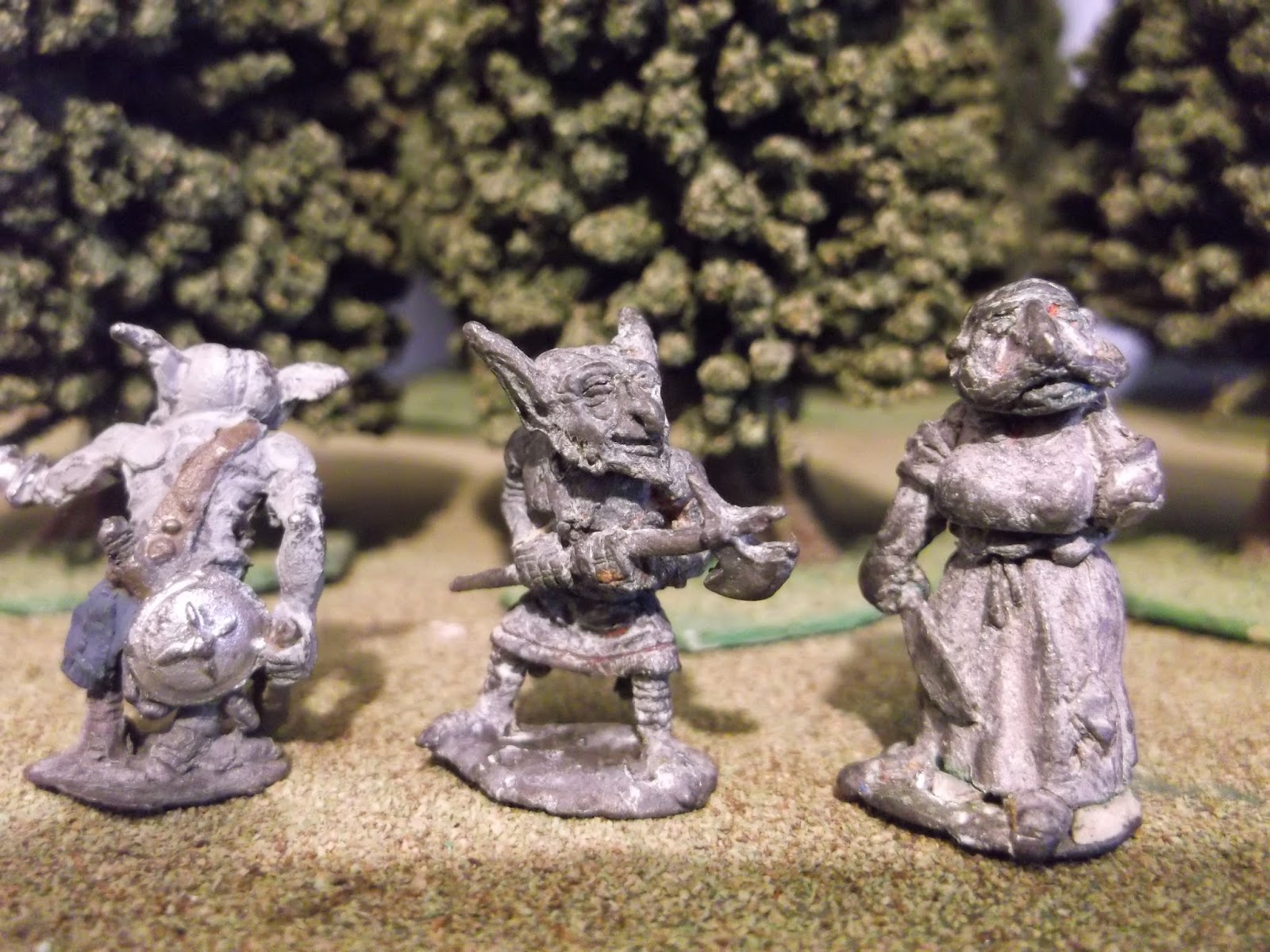 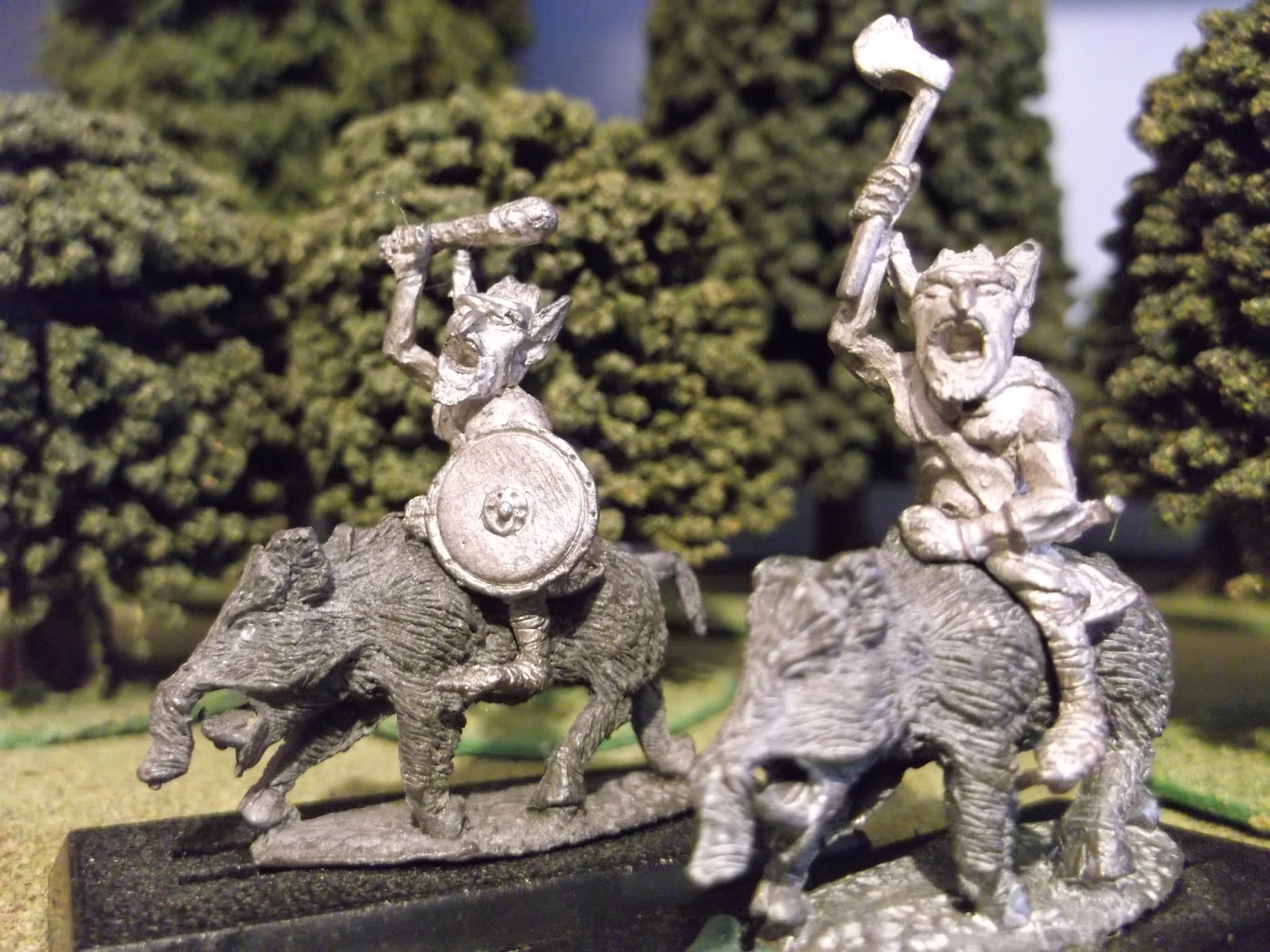 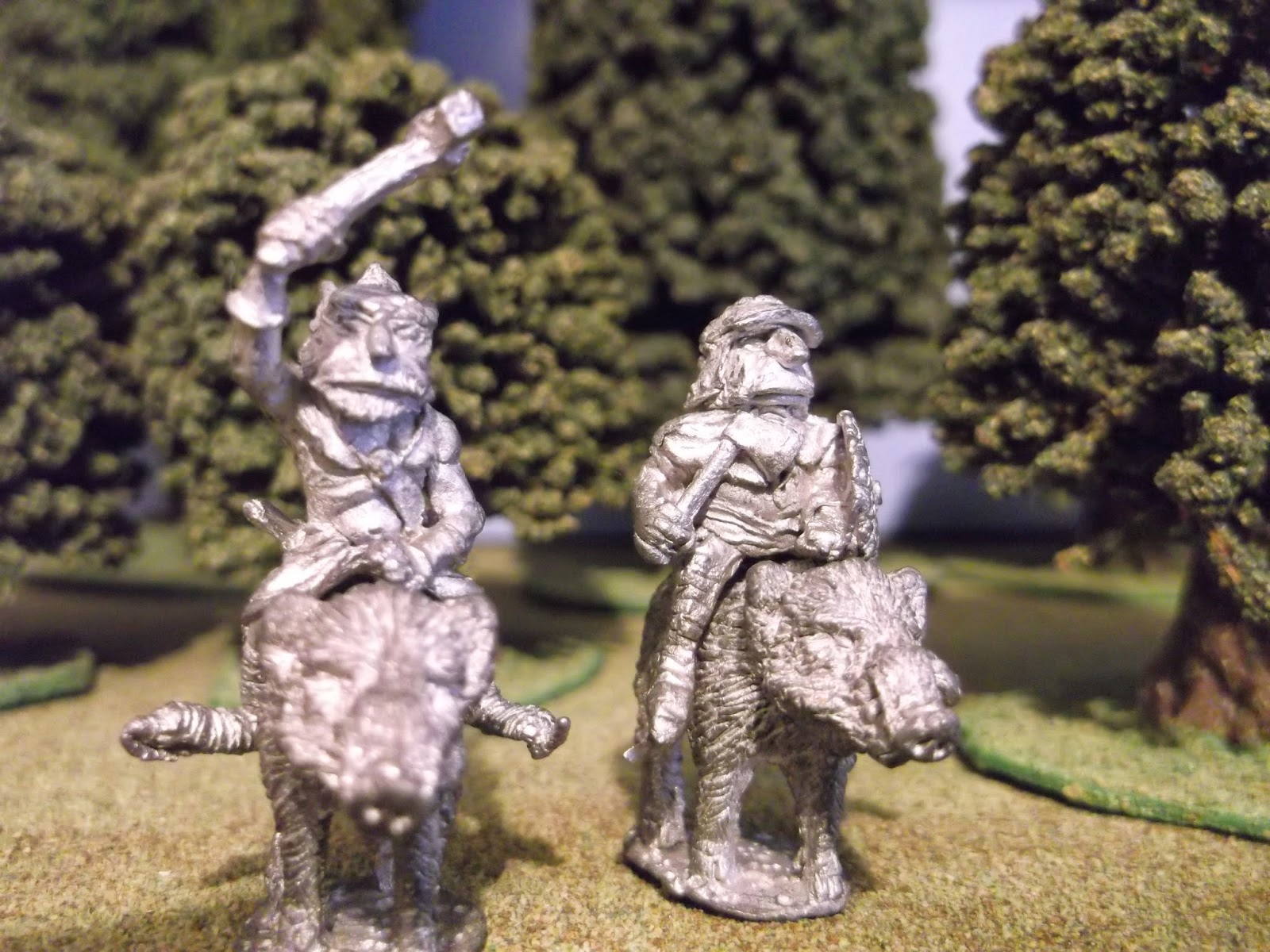 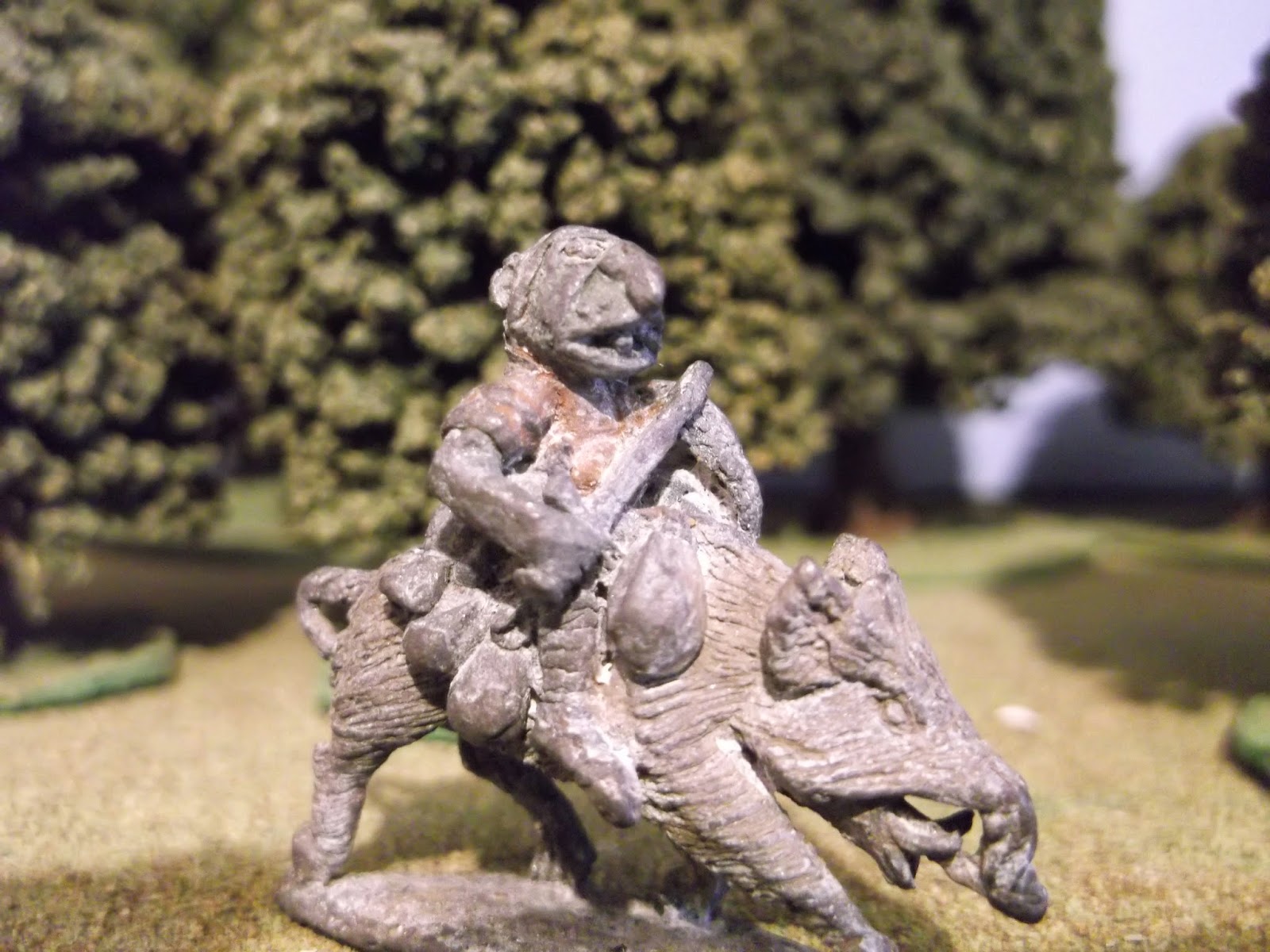 FTG9 Gnolls/Great Goblin on Giant Boar, variation 2, and is also a one piece casting. 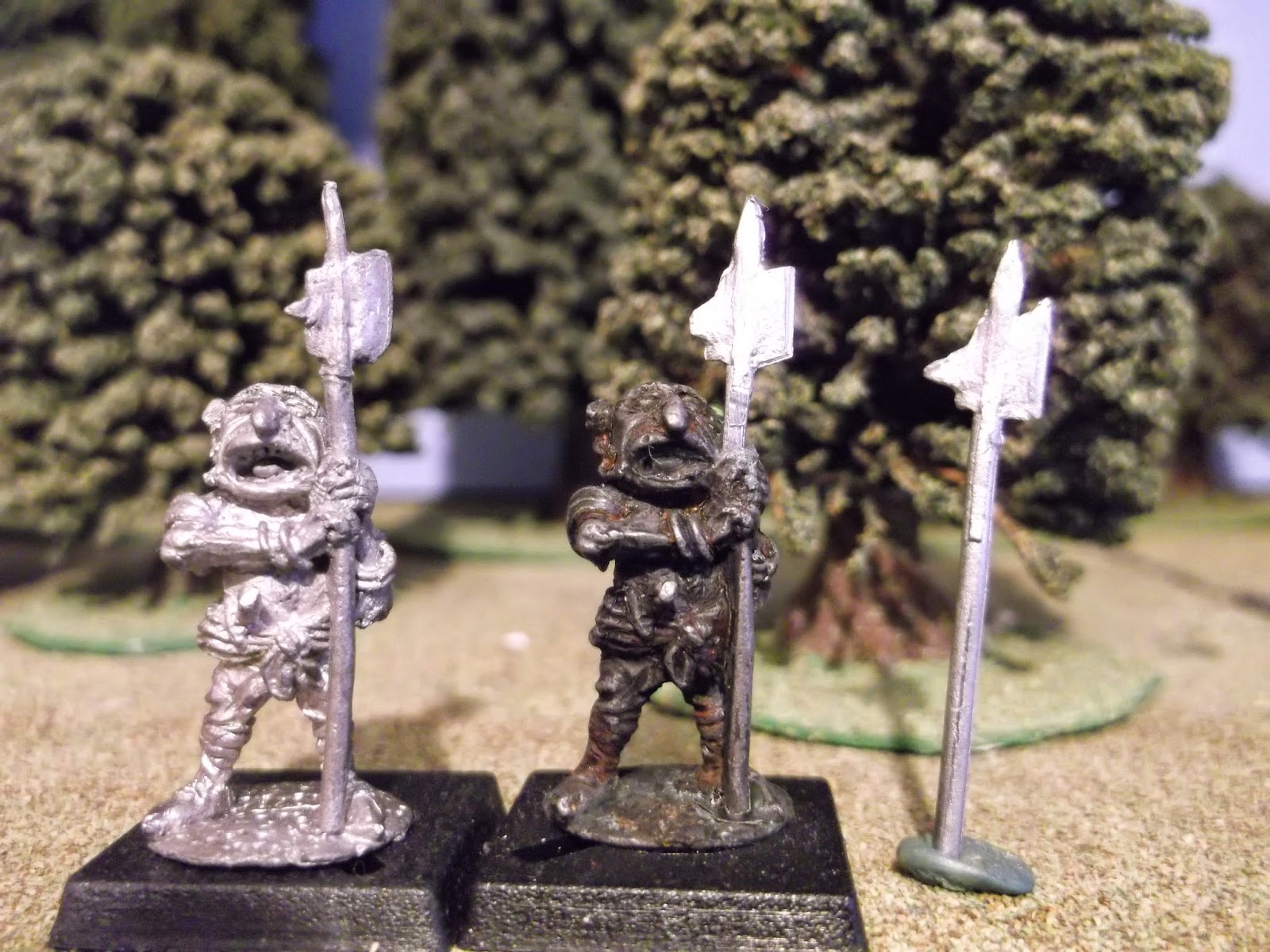 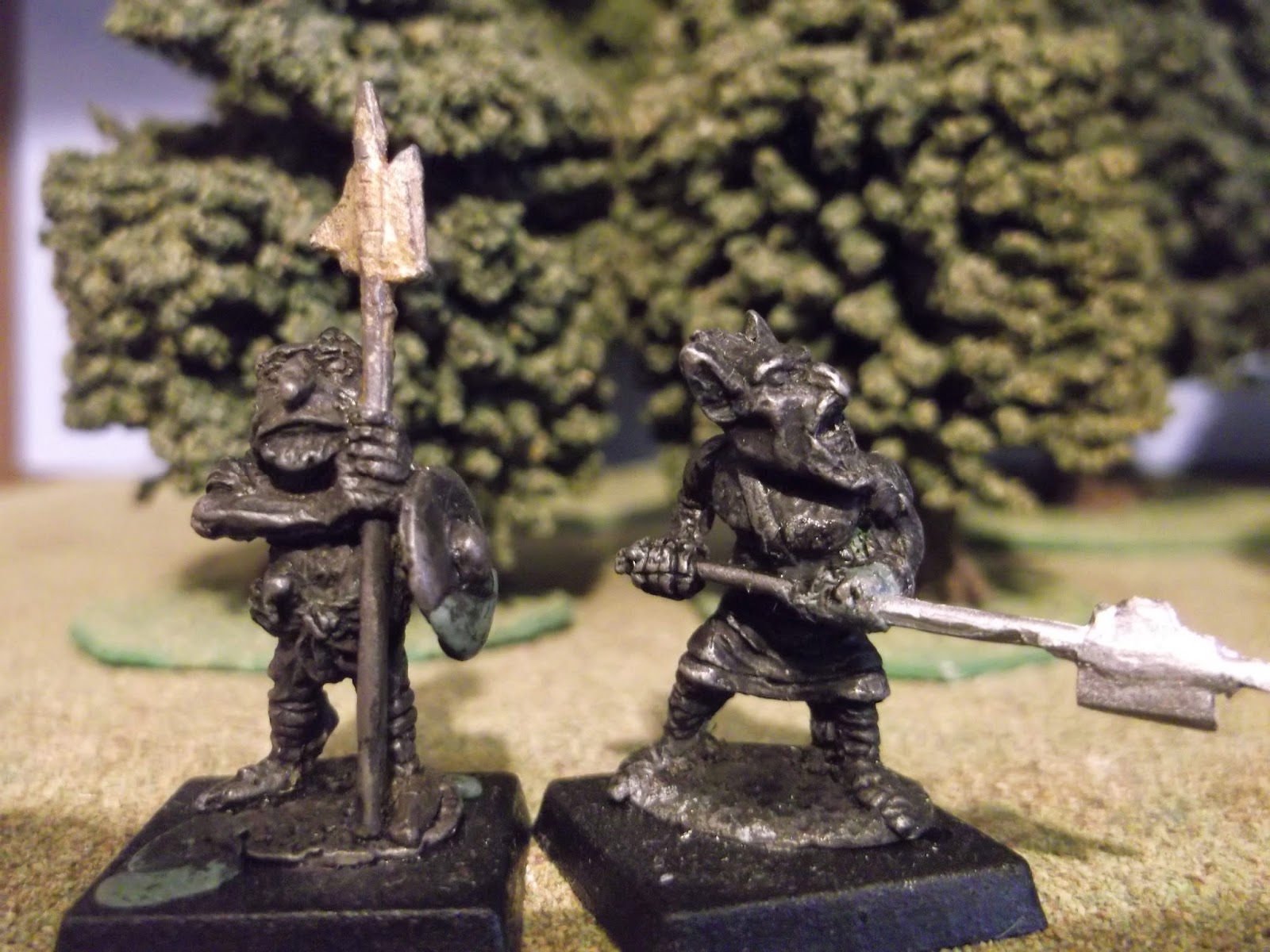 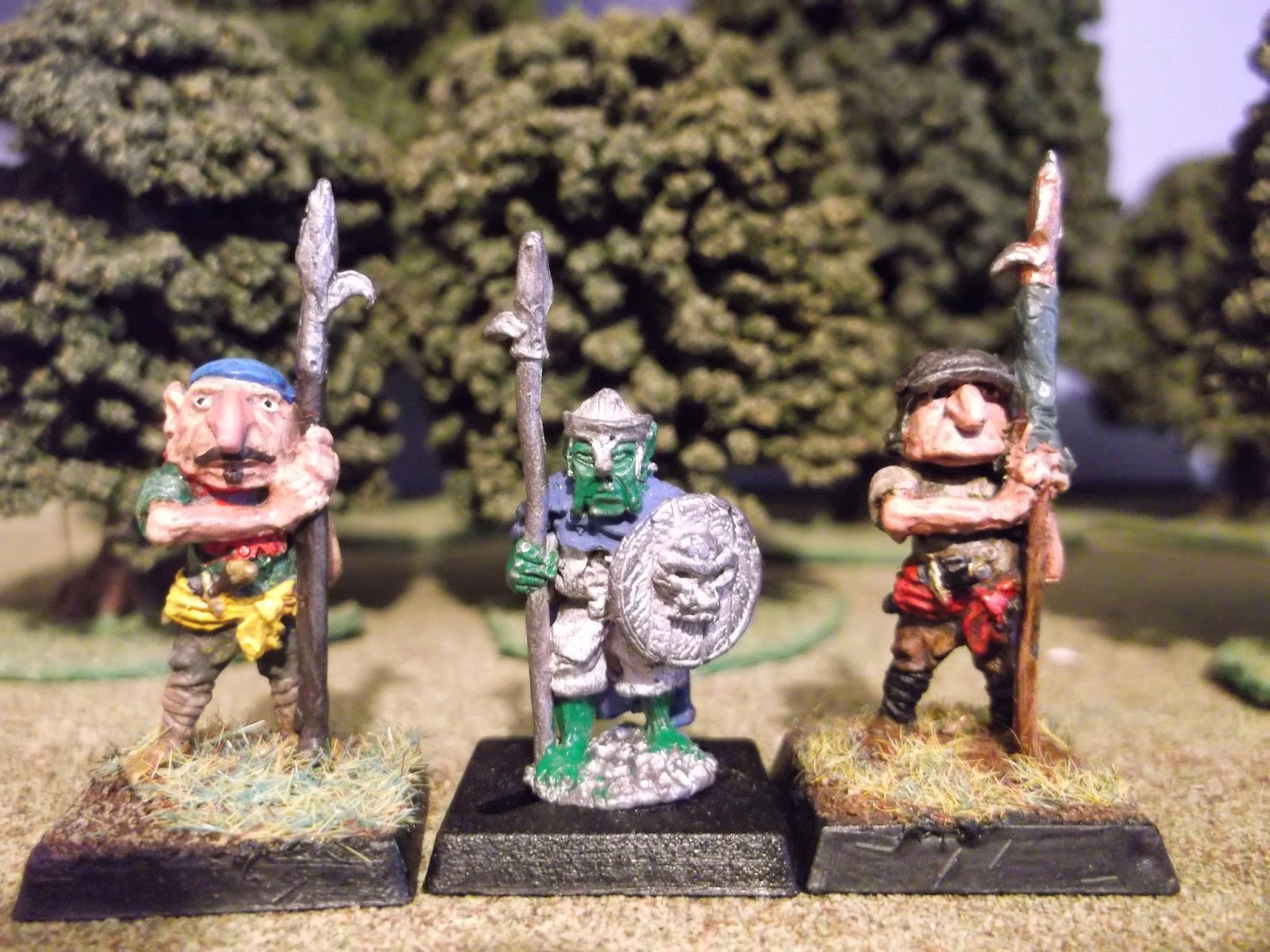 Left is an unbroken Gnoll/Great Goblin with a Pole Arm (a sort of Boat Hook/Bill).
Centre is a Fiend Factory Red Orc/Goblin with the same weapon.
Right is a repaired Gnoll/Great Goblin repaired using a broken off spear from another Red Orc/Goblin. I need to file down the green stuff  little, but it was added as the pole shaft was slightly thicker. I am aware the pole arm is facing the 'wrong way', but it is like that on this actual model.
The broken, pole arm-less Red Orc/Goblin will be converted into a standard bearer. 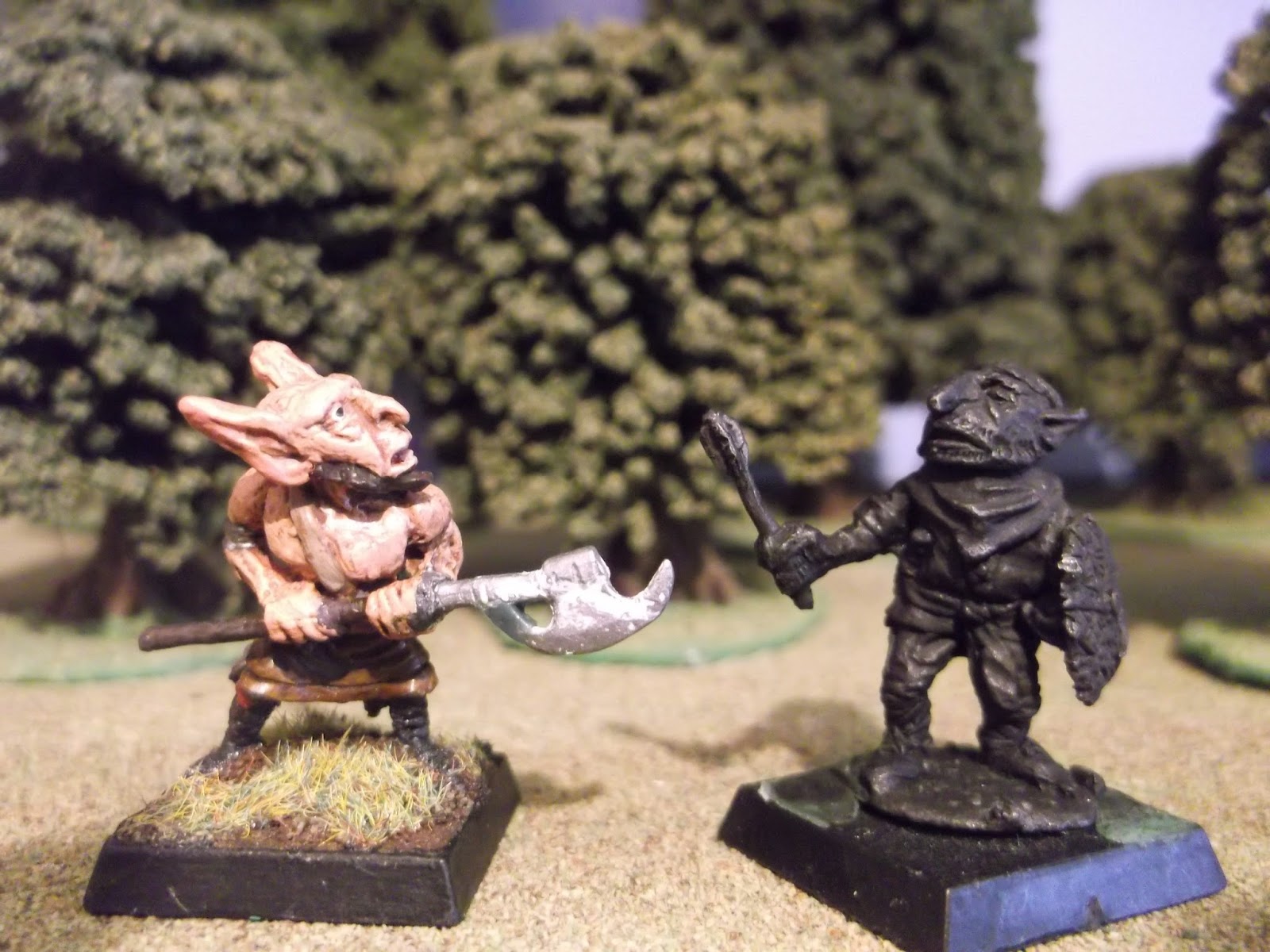 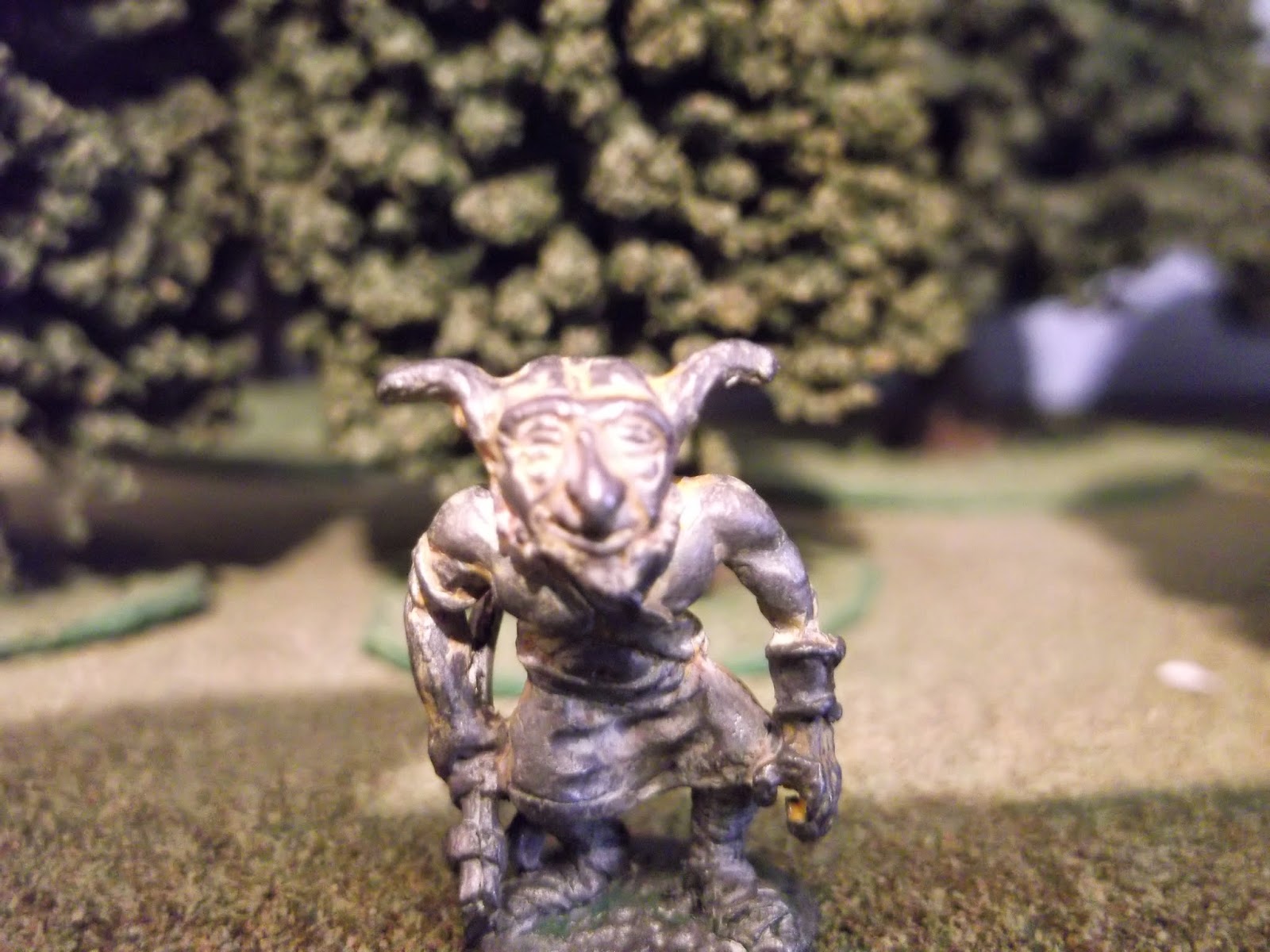 Finally a FTG 7 Gnoll/Great Goblin with Hand weapon.
He's not damaged or repaired, nor is he a model is did'nt have before.
I just posted him as he's cute, look at those ears :)

Next week's update should be more on  painting Slann. As I am painted Slann at the moment, I am also considering doing a focused update on the Slann ranges of models, with front and back photographs and a detailed analysis of the design and sculpting.
Posted by Goblin Lee at 21:27