This is a very much briefer update than I had planned. This week I have finished painting the last of the Slann needed for the upcoming 5,000 point battle.

The army is now tabletop ready. However, due to a series of problems I have encountered this weekend I have'nt been able to assemble the whole army for photographing. I plan to do an army photograph mid week (wednesday or thursday). I will also have to postpone the examination of all the Slann ranges until my next proper update, which will be this Saturday as I am out all day on the Sunday.

On the plus side, I have painted 22 Slann this week, varnished them, and based them, as well as varnishing and basing the 20 Jaguar Warriors, the War Altar and Guards, and 40 Spawn Band Slann. In addition I varnished 187 Skaven and 6 Rat Ogres.
Enjoy :) 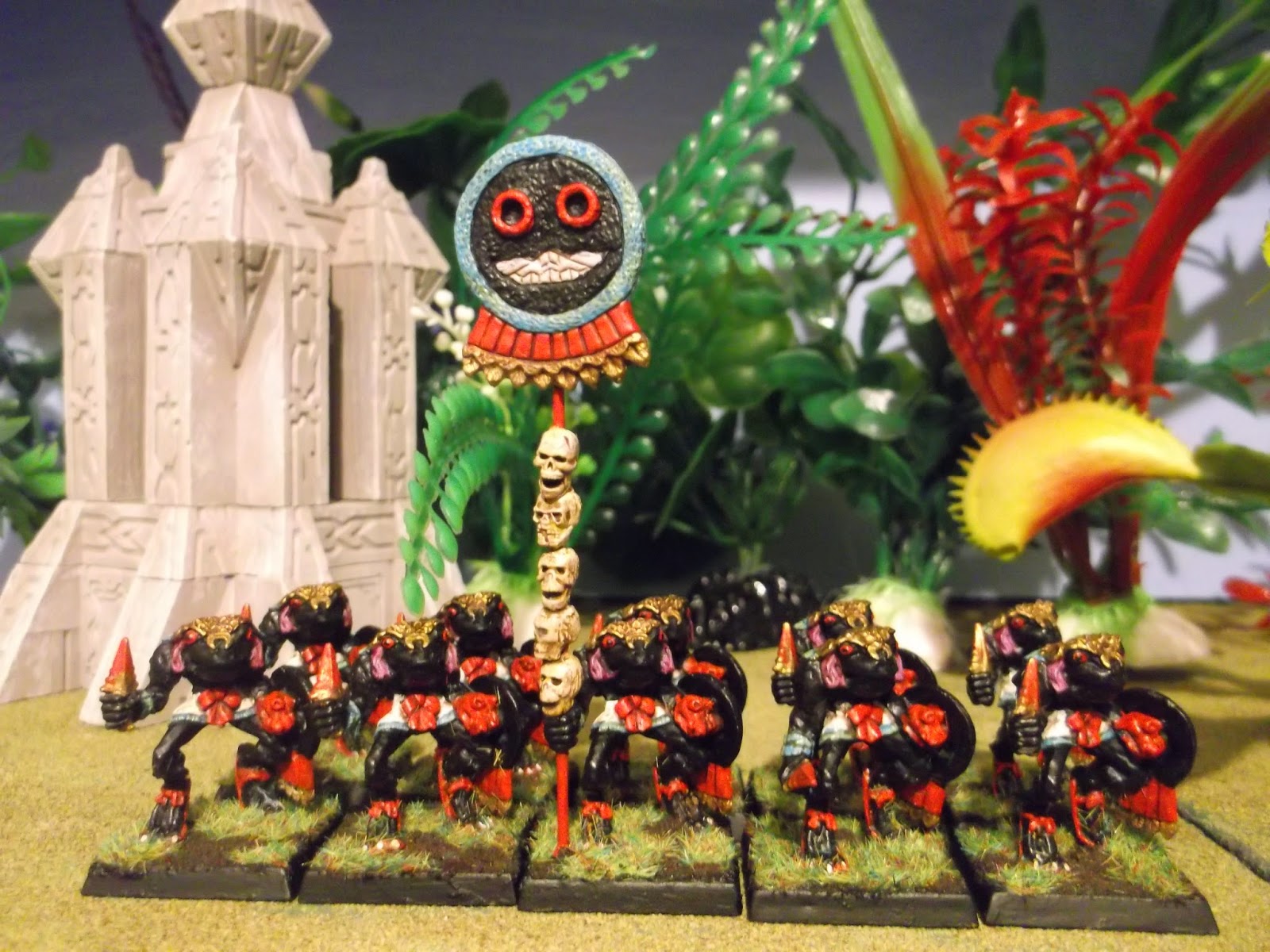 10 Warrior Priests with Bane Banner.
The banner is an Aztec 'Smiley Demon' banner from Outpost Wargames, with a collection of GW skulls on the pole.

EDIT: I have now repainted the banner here:
http://goblinlee.blogspot.co.uk/2014/09/5000-point-slann-army-ready-to-march.html 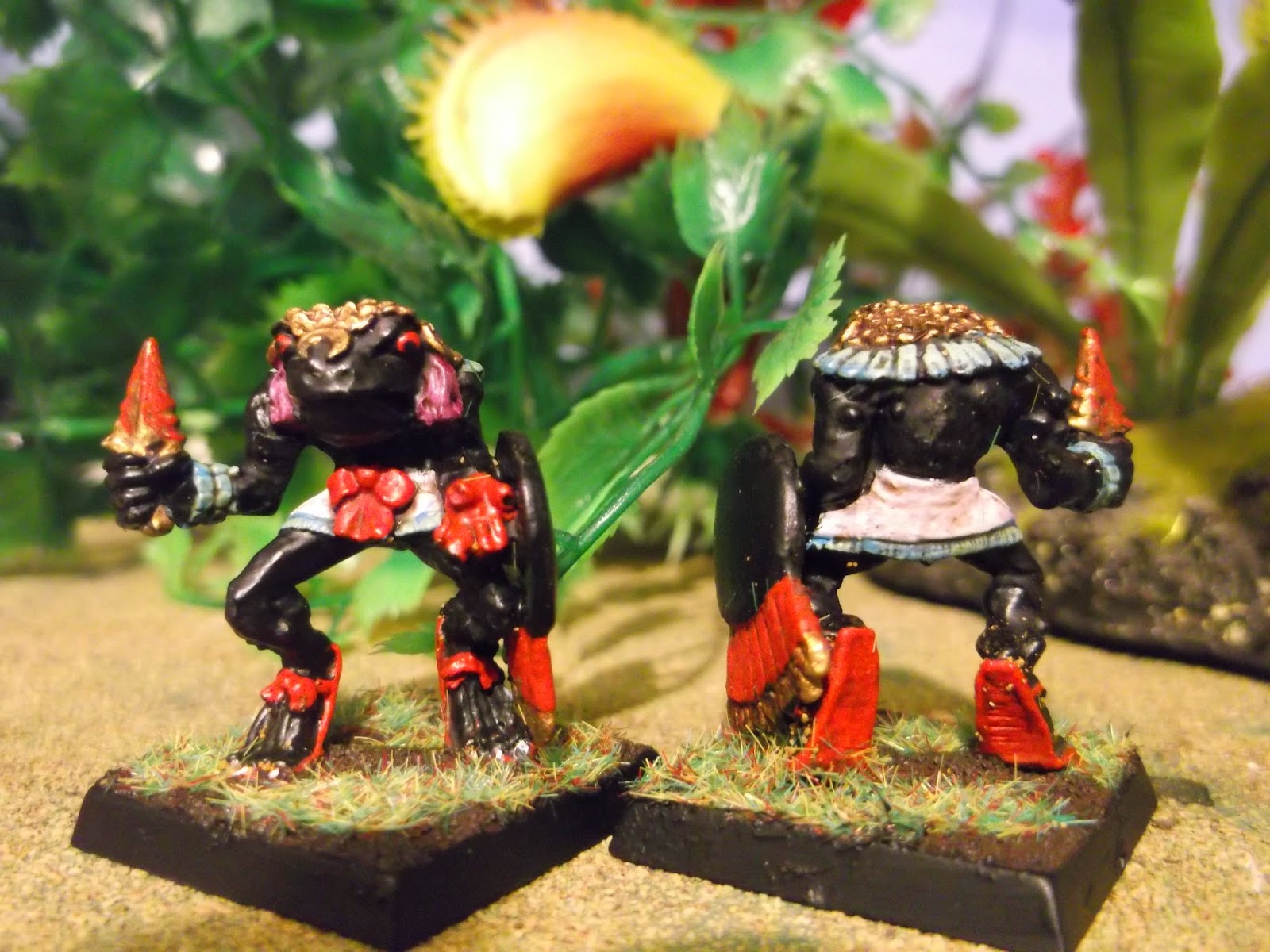 Close up, front and rear.
I went for a golden dagger rather than obsidian as I felt it stood out against the black warpaint of the Slann better. 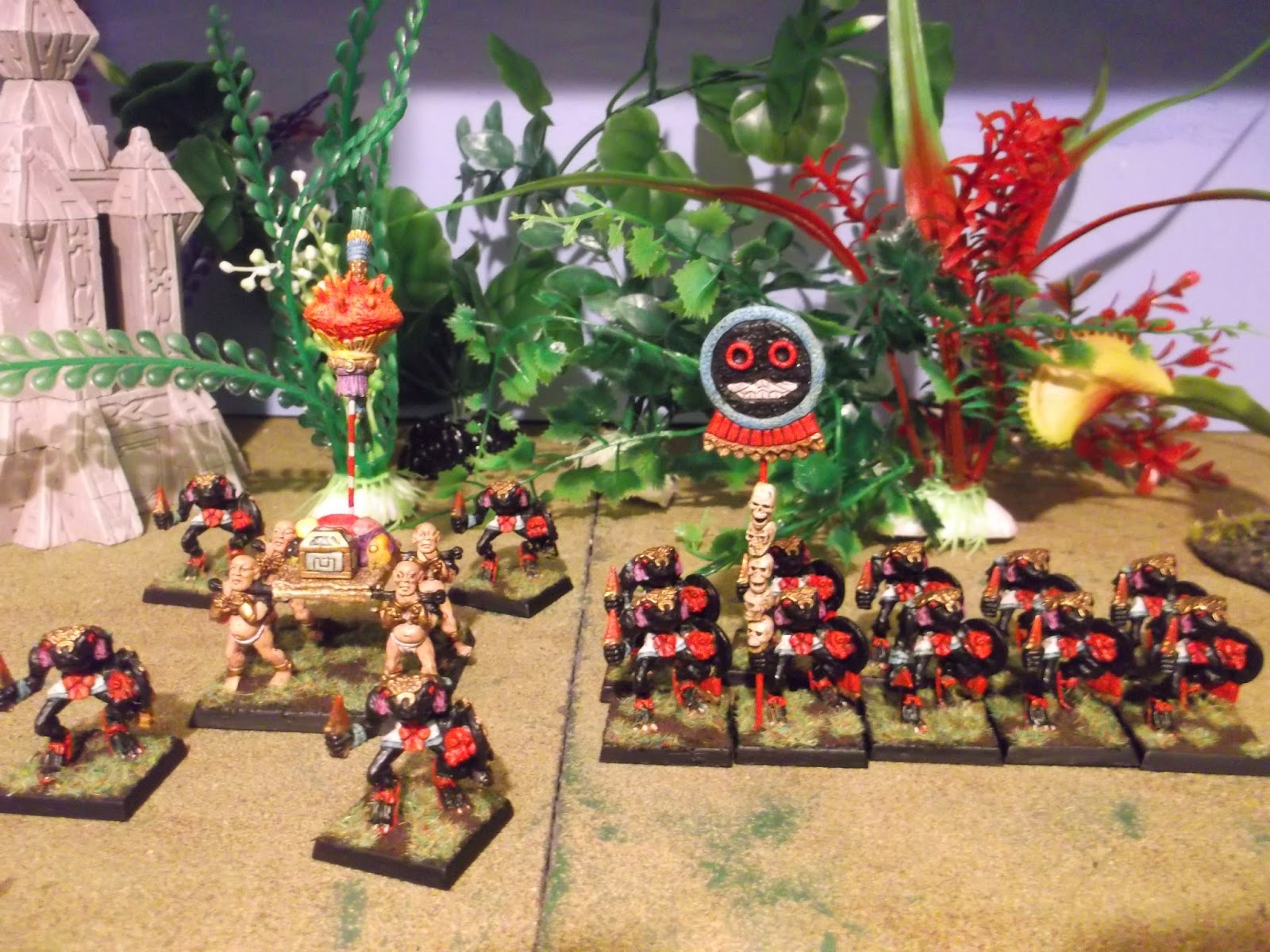 All the the Warrior Priests.
I do also have a converted Priest model sitting on a Palaquin but I have not painted him yet as he is not needed for this 5,000 army list. 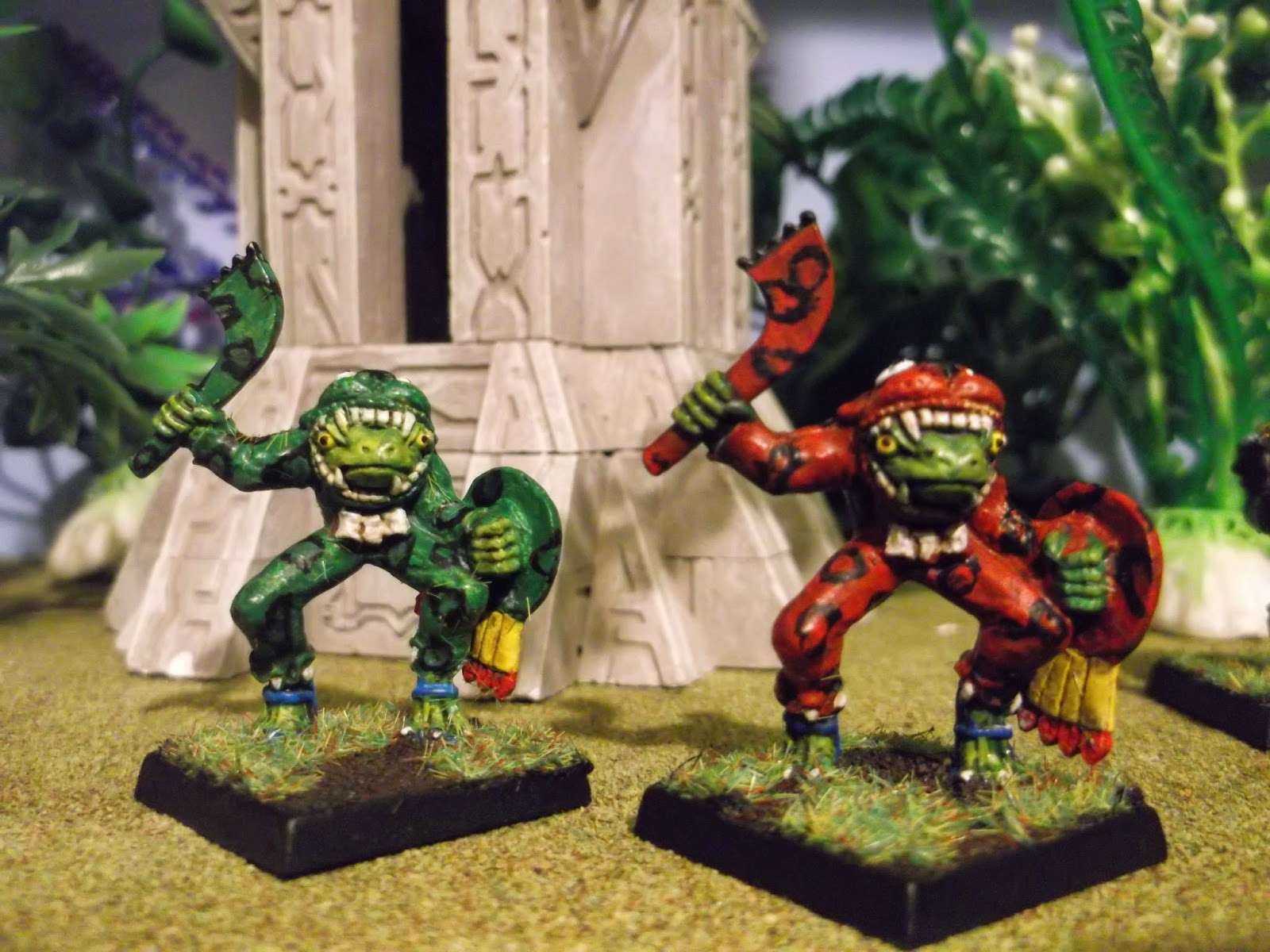 The last pair of  Jaguar warriors needed for the regiment. I painted the Jaguar Warrior suits either, tan, red, green or blue as the Aztecs used to use different coloured suits issused acording to a warriors experence and the number of captives they took for sacrifice. 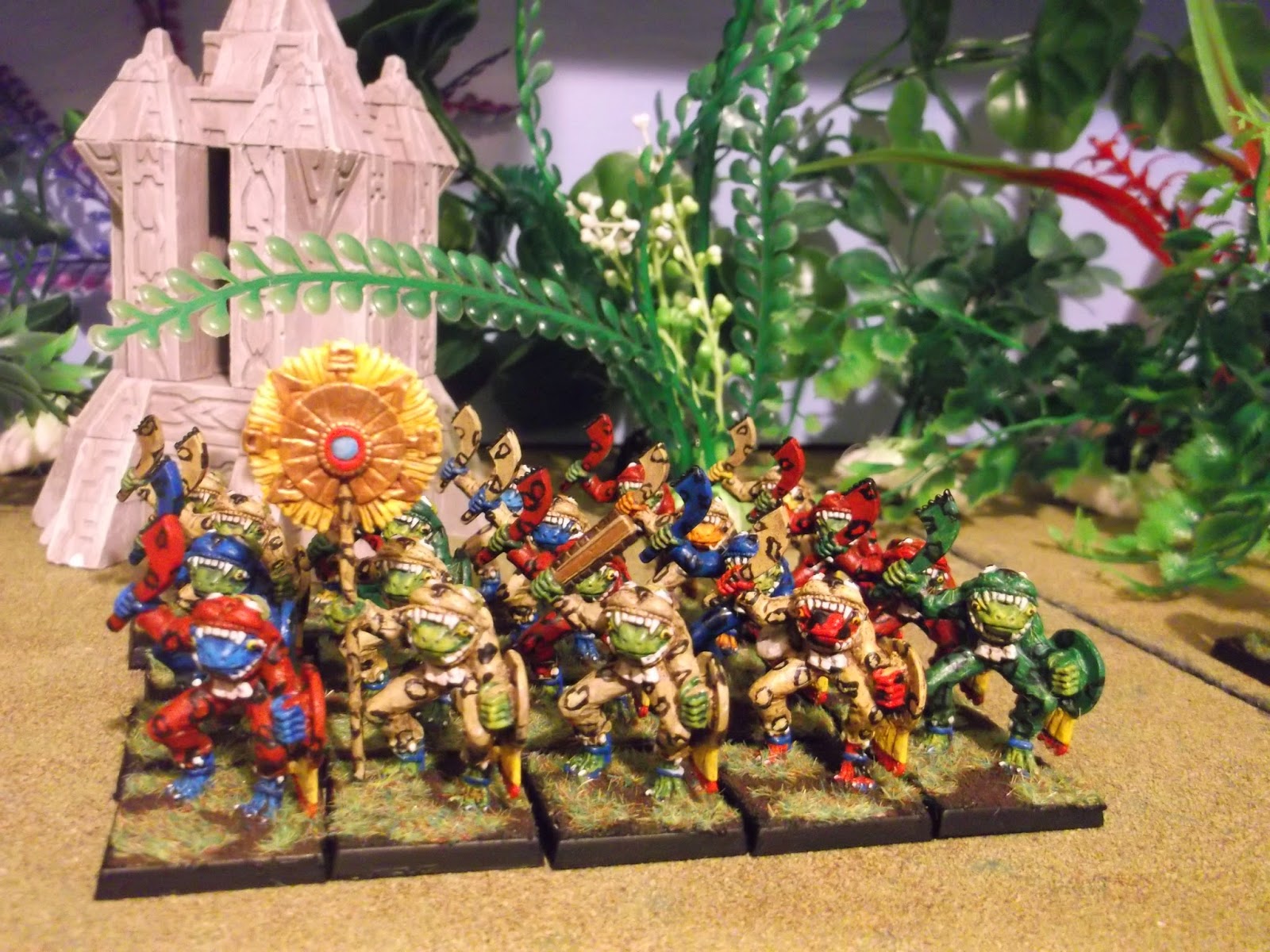 20 Jaguar Warriors.
I thought different coloured suits would break up the bland uniformity of the regiment and add extra colour. I have kept the shields and some of the details the same, just varied the suits colour and the flesh of some of the Slann.
The banner is an Aztec one from Outpost Wargames. 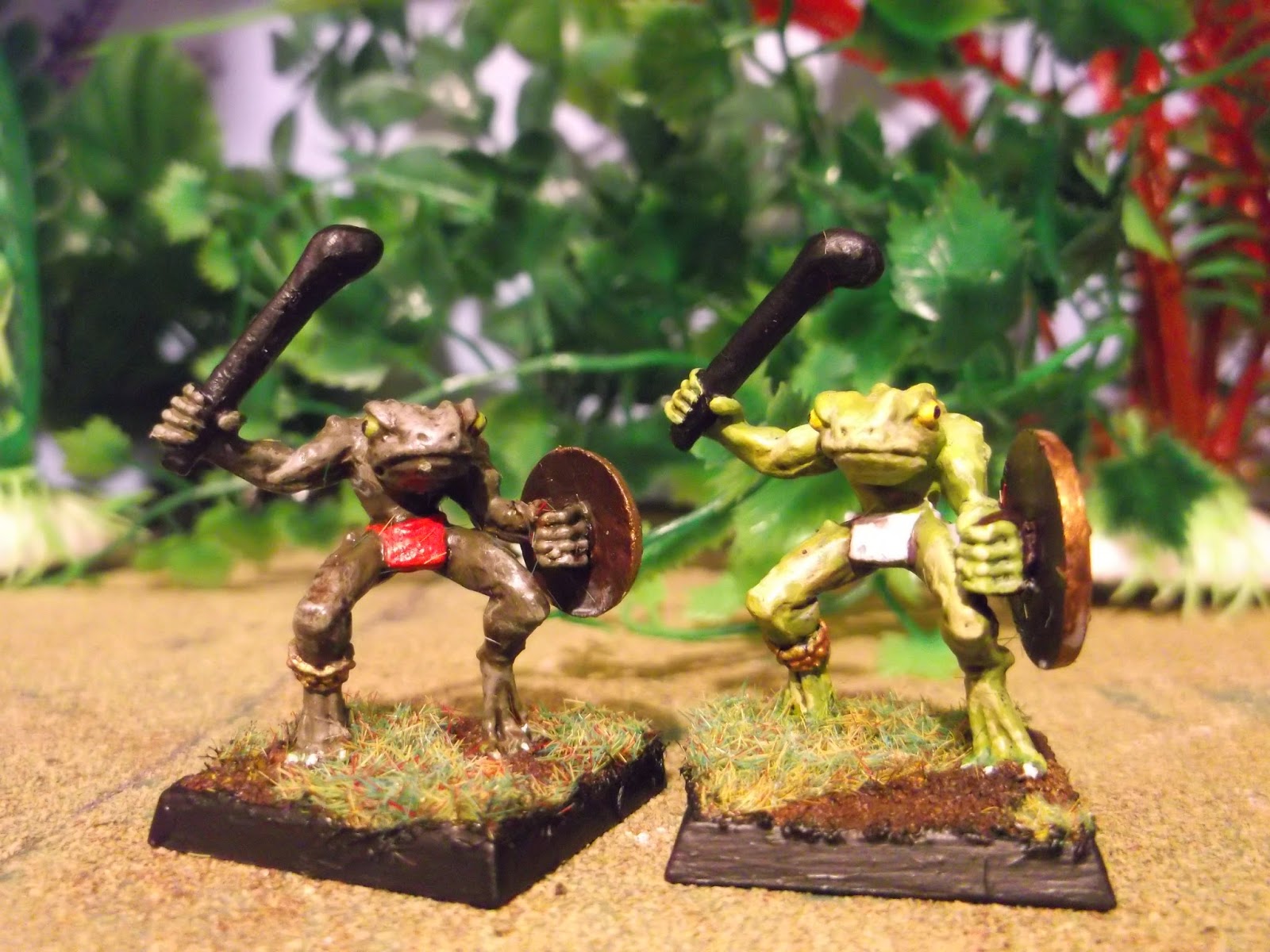 Slann Spawn Band Warriors.
Both miniatures are the 'Nahuatl' model. I already have a Jungle Brave Regiment made up of this model, and it's one of my favourite Slann miniautres as it's face is full of character, and it's really quick and easy to paint! 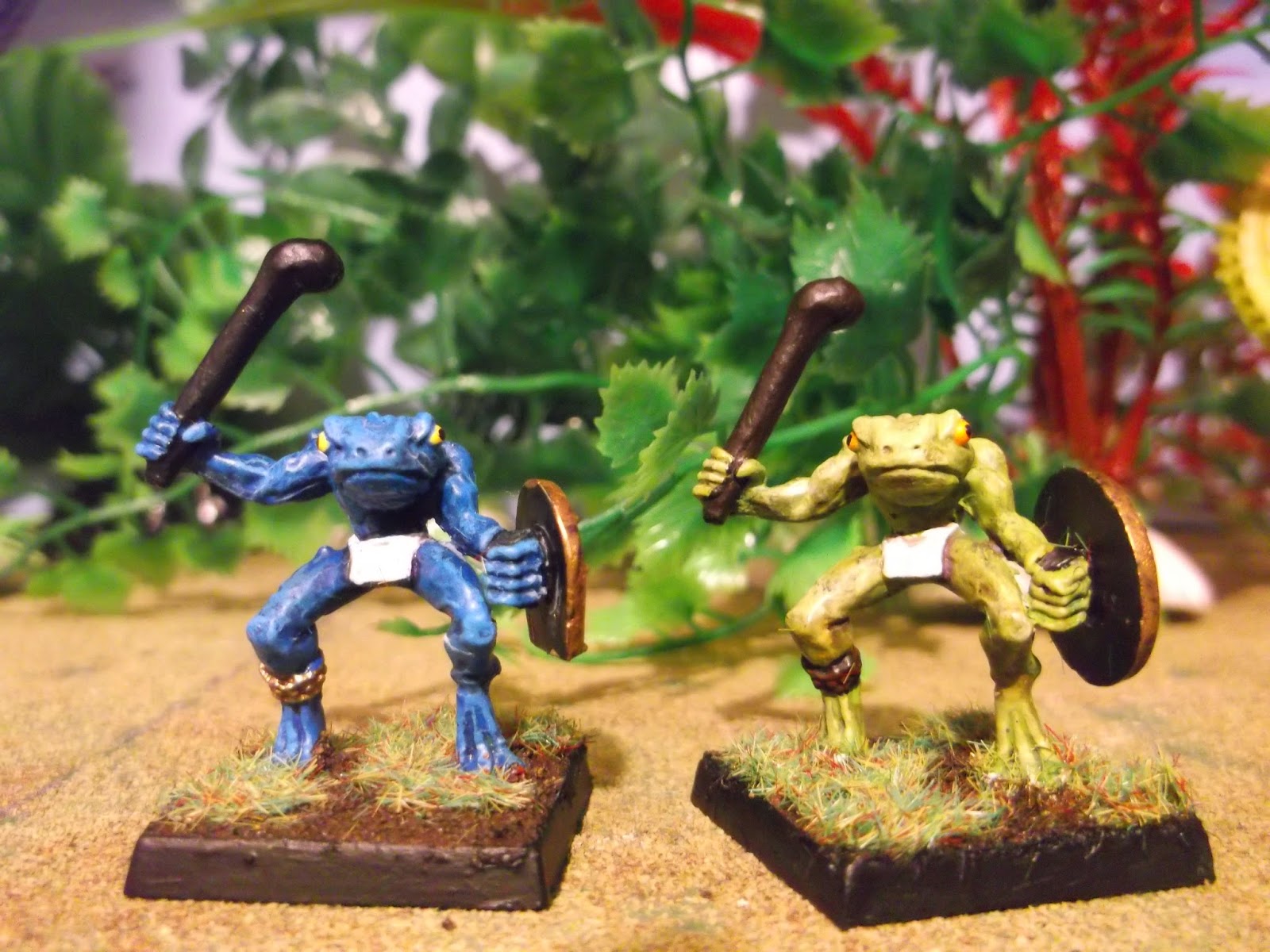 2 more 'Nahuatl', one blue and the other with a slightly re-positioned arm and orange eyes.
Incidentally, Nahuatl is the Meso-American language which the Aztecs and other groups spoke (and still do) in Mexico. 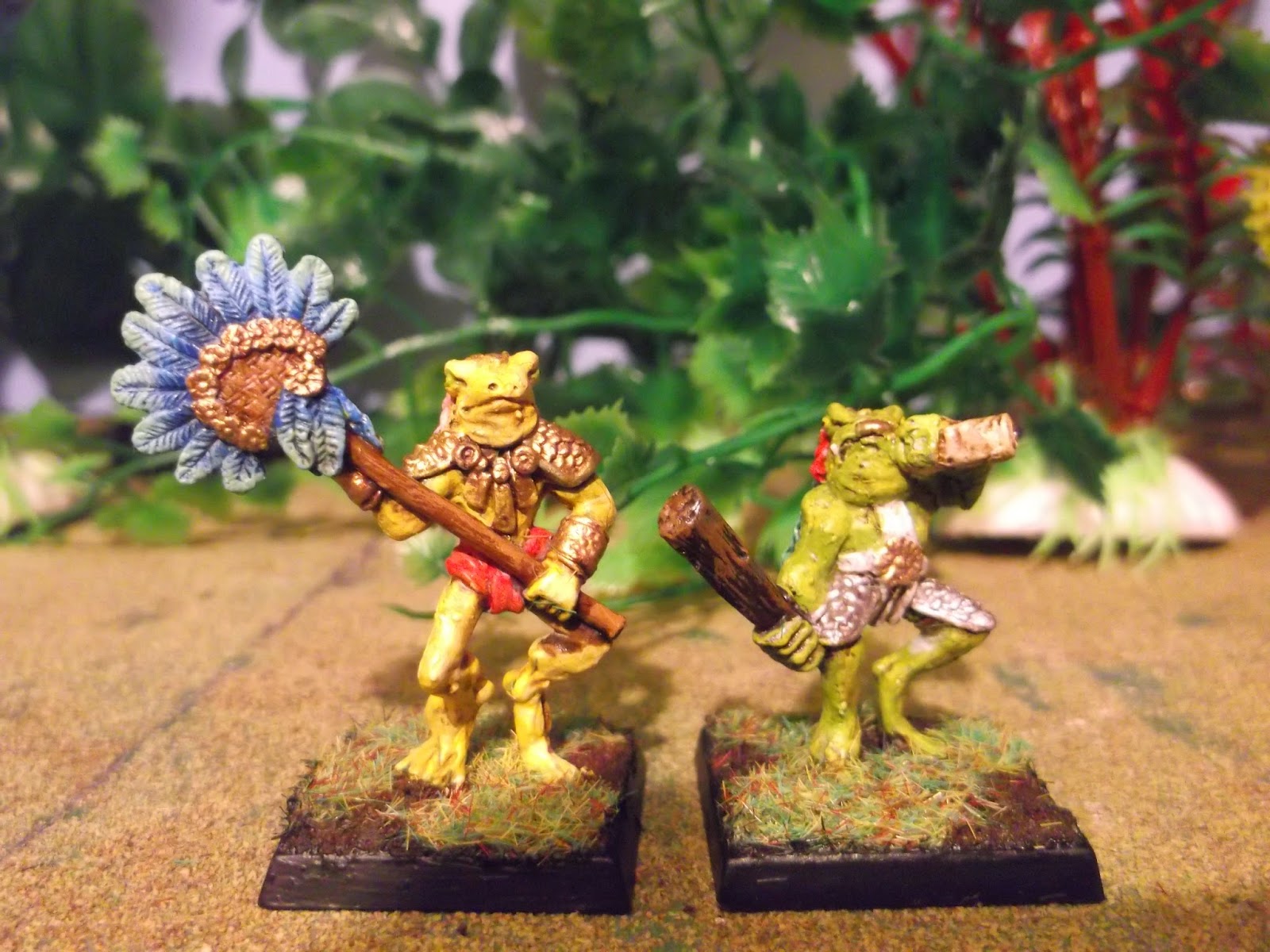 Fan bearer from the Palaquin set pressed into service as a Standard Bearer.
Right is the 'Unlisted Slann with club' which I have converted to hold a small horn so as to act as a musician for the regiment. 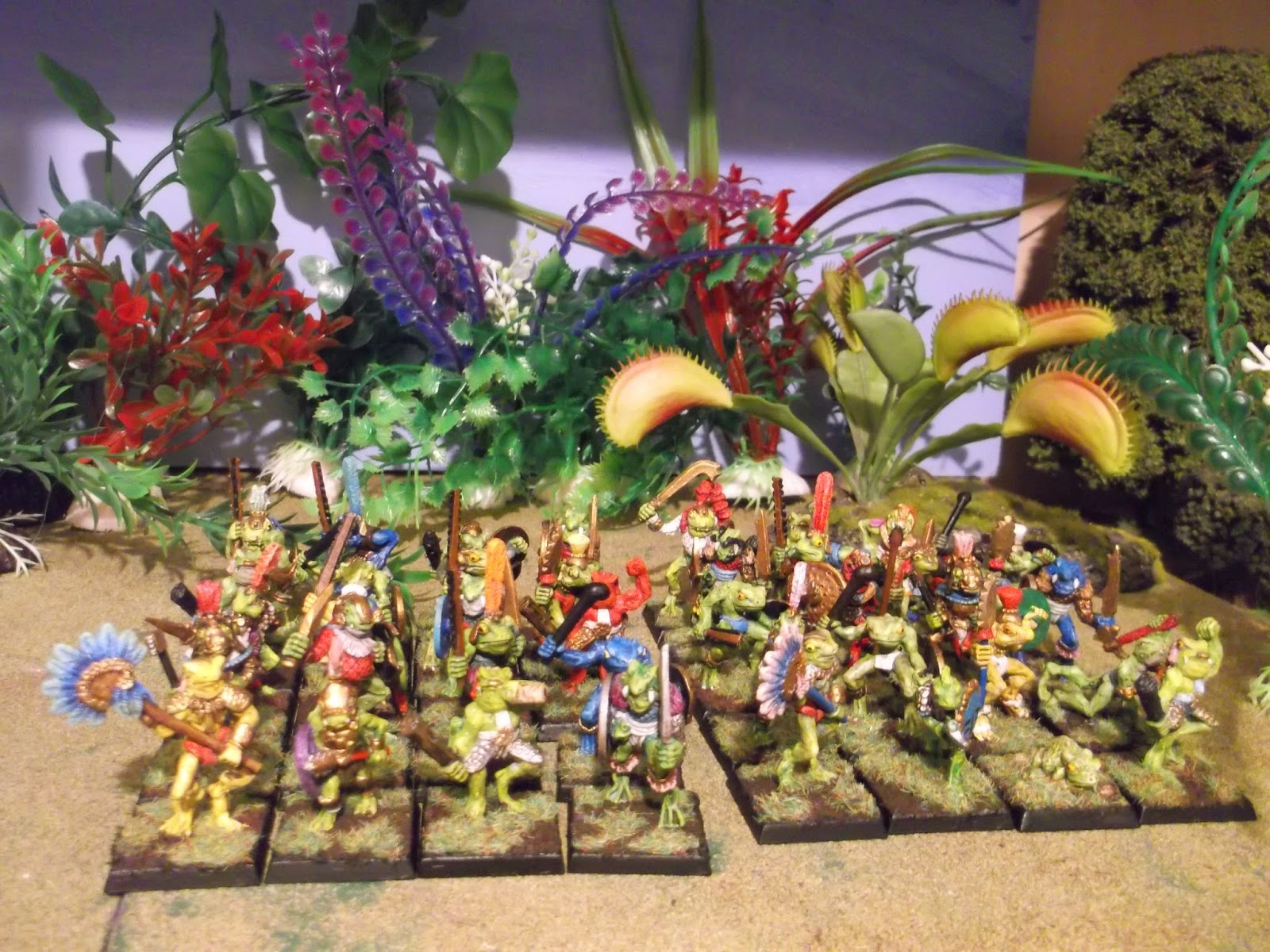 As I mentioned, I will aim to do the 5,000 point army update mid week, and then hopefully the full Slann ranges update next weekend. Painting wise, despite the temptation to carry on painting Slann, I shall return to the Skaven.
Posted by Goblin Lee at 21:57