Continuing my painting of Citadel Fantasy Tribes/early C-series miniatures in line with my idea of the Goblin/Dwarf Wars, I have moved slightly forward in time to 1984 and the start of the C-series. This week I have painted up the complete set of the C27 Chaos Goblin Mutants.

These lovely little Goblins were made around 1984 as Citadel was moving away from the Fantasy Tribes ranges and to the C-series of solid based miniatures. They were designed by Alan and Michael Perry, and share a very similar look in design style to the other solid bases C-series Goblins (C13 Night Goblins especially) which they produced around the same time. This is before Kev Adams started to domiate Citadels Gobliniod scultping with the later 1980's Slotta Goblinoid ranges. As such, I think they have a slightly different feel to them, and are contiguous with the Fantasy Tribes ranges.

The range was released in 1984 and first shown in the Second Citadel Compendium, and were available for a number of years until the late 1980's when the Slotta based Goblins began to dominate. They are sometimes listed as 'Chaos Goblins' or 'Goblin Mutants', and are part of the wider C27 Chaos Creatures range. There are ten models in the range. They were made before the Chaos books were produced ('Slaves to Darkness' and 'The Lost and the Damned'), and so unlike later Chaos models they are not aligned to any particular Chaos Power. However, as I will show later in the update, I have painted some accordingly.

Personally I like this range as they are quirky, and have a sense homour in the sculpting. They combine the pre Chaos books appraoch to generic Chaos, as well as the early feel of the Perry Twins design of Goblins. I think the will fit in with any Chaos army, but also fit nicely with my early 1980's Goblin/Dwarf Wars project as a stand alone warband. 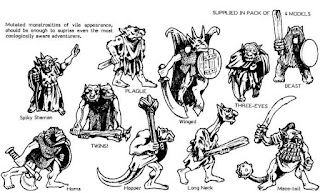 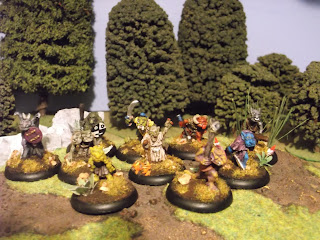 All ten of the Chaos critters on top of the hill. 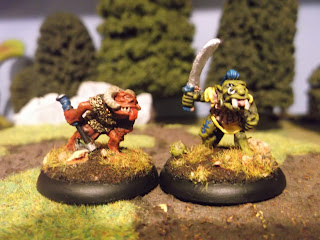 'Horns' and 'Mace-tail'.
As noted above, they were made before the explaination of the background of the Chaos Powers. So I have decided to paint a Goblin in the colours/style of one of the major Chaos powers, and Maal. I chose myself which of the Goblins I thought would fit best with each of the Chaos Powers.
Here I have chosen 'Horns' as Khorne, and 'Mace-Tail' as Slaanesh. I thought with his horns, axe, and toothy grin, 'Horns' looked more Khornate, and I helped that by painting him red skinned.
'Mace-tail' had a Slaaneshi look to me, and so I painted him with pink leather scale armour, pastel yellow clothing, blue and pink colouring, and with a Slaanesh rune tattoo on his leg. 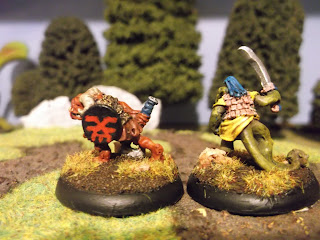 The left sides, showing 'Horns' rune of Khorne on his shield, and 'Mace-Tails' pink leather armour. 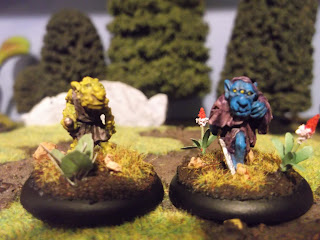 'Plague' and 'Three-eyes'.
For me 'Plague' could not be anything else but a follower of Nurgle, so I painted this poor pox-ridden Goblin in a sickly yellow colour.
'Three-eyes' reminded me of the many eyed Tzeentchian followers in artwork. So I painted him in Tzeentchian blue and purple, with magical looking yellow eyes (all three of them!). 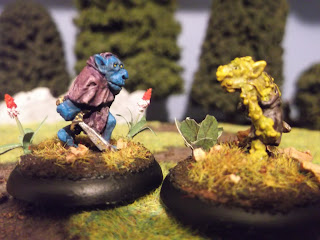 Side views.
Look at the icky yellow skin, poor thing :( 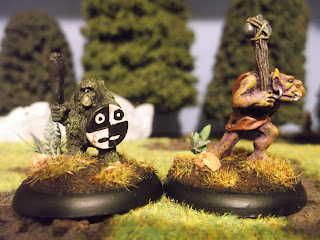 'Beast' and 'Hopper'.
I was stuck a little for a Maal follower, but 'Beast' allowed for a Goblin with a little mystery, and to be able to paint the shield with the black and white style of Maal.
'Hopper' is the first of the non-Chaos power Goblins. I painted this one-legged and tailed Goblin up with purple flesh, which I then highlighted with mid brown (Citadel's VX-88, the new named for Snakebite leather), to give a weird magical feel. 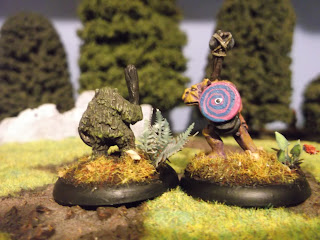 Rear/side view.
'Beast' is hairy, and has green fur!
'Hopper's' shield I painted up with an early 1980's/1960's looking freaky spiral. I painted it, and then thought it does'nt look very symetrical, but then decided that was quite in line with Goblins, and Chaos Goblins at that. I painted an eye in the middle for no particular reason. 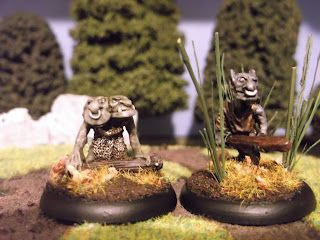 'Twins!' and 'Long Neck'.
Both of these Goblins appear on the cover ofthe 3rd Edition Warhammer Fantasy Rulebook, and so I painted then the same as the artwork.
I positioned the long grasses on 'Long Neck's' base to suggest he is poking his long neck through the undergrowth. 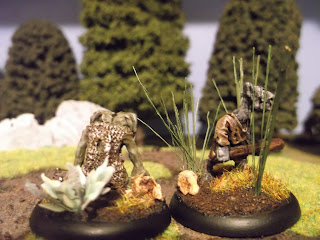 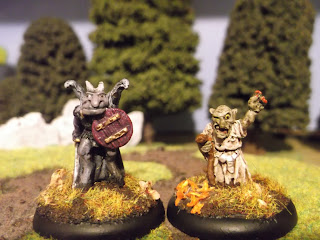 'Winged' and 'Spiky Shaman'.
With 'Winged' I thought I would paint him in the style of a cross between a Goblin and a Gargoyle, as he seemed to remind me of one. I painted him a granite grey, adding a little bit of metallic medium to suggest smooth granite stone, and chaos magic.
'Spiky Shaman' was the last of the Goblins I painted and I was stuck for how to paitn him. I painted the skin the olive green and the robe white, and then looking at his snake shaped stick I thuoght of an idea. I will paint him up as a Chaos Goblin version of Yoda! Quite apt as he is a Shaman. 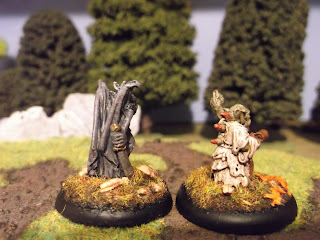 Rear views of the two of them, showing 'Winged's' wings, and 'Spiky Shaman's' spikes.


Next blog update will probably be more Goblins, Great Goblins Gnolls, and maybe another Troll.
Posted by Goblin Lee at 23:43