75,000+ views, basing materials from 'Forged in Blood' and 'Gaugemaster', and lots of Great Goblins/Gnolls.

Before starting this weeks update I checked my 'number of views' and as of this evening I have reached 75,773 since I started blogging in April 2013!
A big thank you to everyone who has taken a viewed my blog and taken an interest.

I have received a lot of interes, positive comments and feedback regarding the updates concerning the Great Goblins/Gnolls.  This is great (like the Goblins really! LOL) as they are a wonderful range and it has been my intention to focus my efforts on this range for the for some time. I will also be painting more FTD Dwarves and random early 1980's Citadel solid based odds an ends which fit with the 'Goblins Wars' era project of which they are all a part. I'm planning to do an update on the Goblin Wars as well. For now, here's a hill of Goblins before I start the part of the blog on concentrating on the basing/scenery materials from 'Gaugemaster' and 'Forged in Blood'.
Enjoy :) 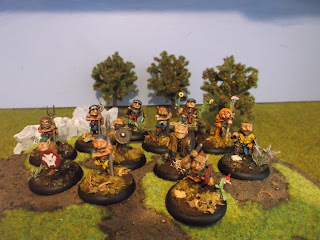 What I wanted to achieve when I decided to re-base the Great Goblins/Gnolls and other Fantasy Tribes miniatures on 30mm bases, was to spend more time on painting each of the miniatures as individuals. Part of that was to make the bases look better and more interesting than my previous bases I had done for the 3rd Edition Warhammer armies. One of the ways I feel I have done that was adding little model flowers and ferns, and other plants. Most of these are made by a model railway company called Gaugemaster, who also owns the company 'Noch'.
Now Gaugemaster is based in Ford, which is only 30 mins along the coast from Brighton and Hove by train, so on monday I popped along the coast to take a look. They not only stock their own range, but a lot of imported item of scenery, model flowers, trees, flock, mats, and of course model trains. I found them very useful and friendly and their website can be found here:  http://www.gaugemaster.com/index.html 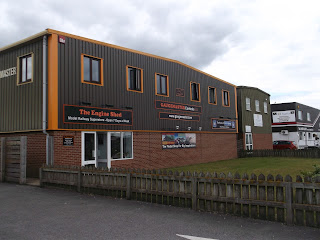 'The Engine Shed', home of Gaugemaster.
They are next to Ford train station. I was still in the station's entrance when I took this photograph.
There is nothing much else in Ford (well there's an open Prison!), but it is only 2 miles from Arundel which is still a largely medieval/old style town, with a massive Castle and Cathedral, and well worth a visit in itself. 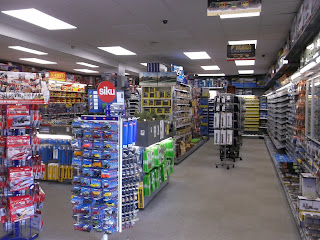 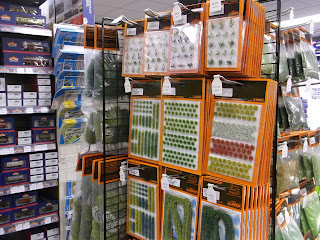 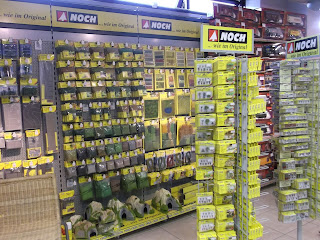 A wall of flock, flowers, tress and other scenic stuff for basing.
Below are some of the things I bought... 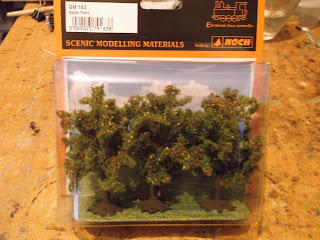 Apple Trees.
These will make a nice change for scenery and backdrop for photographing. 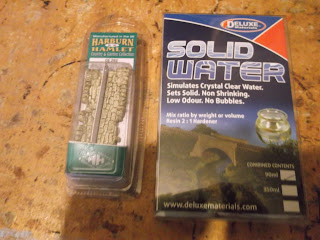 Ready made stone wall, and water effect resin. I am looking forward to using with this :) 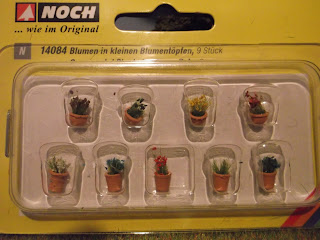 Tiny, cute, little plants in pots. The pots themselve are 5mm high, not including the plants.
I want to use a couple of these on the base for a Troll, to suggest he has wondered into someone's garden and is doing all the mayhem that Troll's are wont do! 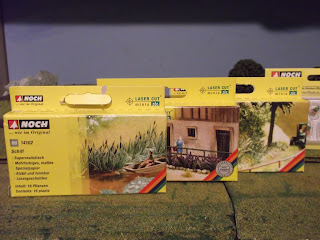 More flowers in boxes, made by 'Noch'.
These are the people who make the little ferns on some of my Goblins bases. I bought two boxes of Ferns as they are great. 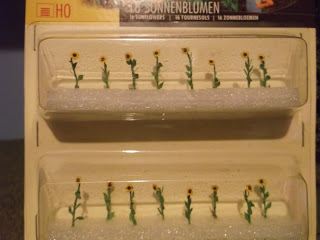 Sunflowers.
I have used a couple of these on a Great Goblin further down this blog update. 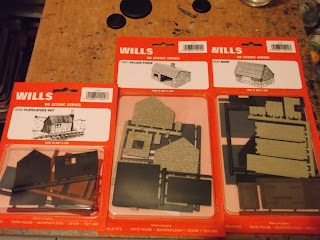 Flat pack buildings.
These are railway '00' scale, which look similar to old 25mm/20mm size, and so work well with Goblins and Dwarves. I have here are a Village Forge, Hut, and Barn.

Now part from Gaugemaster I also had a second set of basing materials to work with...
A few weeks ago I bought some FTD Dwarves on e-bay from the e-bay seller 'magicusermodels', real name Michael. We got chatting, and I sent him a link to my blog and explained my project concerning the old Fantasy Tribes range, which he liked and informed me that he runs a company making his own basing materials. Very kindly he sent me a free sample kit, and so in return I am blantantly plugging his company and will be pointing out where I have used his basing materials on the Goblins I have just painted and based.
Here is his Facebook page: https://www.facebook.com/pages/Forged-in-Blood-Ink/279298008820236?fref=ts 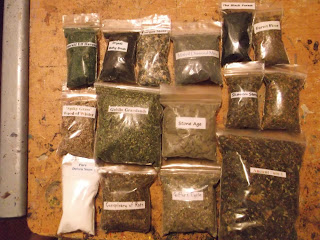 Free basing kit.
The individual types of basing material have quite cool names, such as 'Griffon's Eyrie', 'Forest Floor', and 'Emeral Elf Havens', relating to their type and look, and are good quality.
I have previewed a few of them below and mentioned which of the particular ones I have used on the Goblins. I will be using some of the others later, and will mention those as and when. 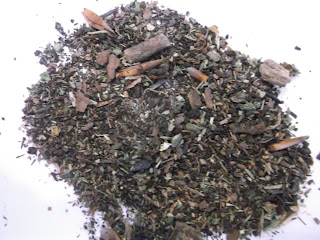 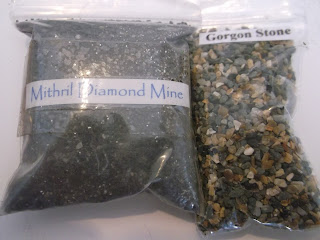 'Mithril Diamond Mine' and 'Gorgon Stone'.
I like the Mithril one as it has little bits of silver glitter in it, and would work well with my Dwarf and Moria Goblin Lord of the Rings armies, so I might re-base them up in the near future.
The 'Gorgon Stone' reminds me of Brighton and Hove beach, and so will be used in conjuction with the water effect resin for a waterline base. 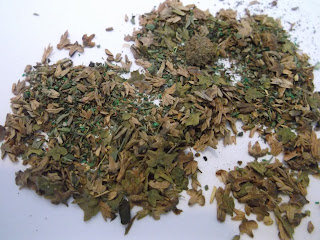 Leaves!
These came in the same pack as the 'Ancient Forest' pack, and are great to add to bases as general leaf litter. 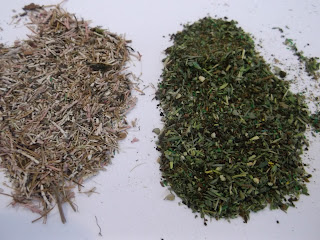 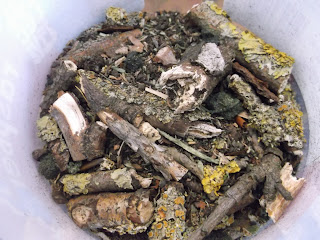 'Ancient Forest', with big bits of logs and lots of leaves.

...and now onto the Great Goblins/Gnolls. 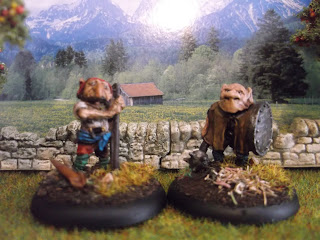 On the left FTG 1Great Goblin/Gnoll with Polearm. On his base is a little bit of the 'Ancient Forest'.
On the right is C12 Goblin with a mix of 'Spiky Grass' and Gaugemaster flock with bits of cork in it.
The backdrop behind the Goblins is the backing card which came with the apple trees. The wall is the ready made wall, and I bought a little static grass mat to replace the rather tired old boards I have been using for a while. 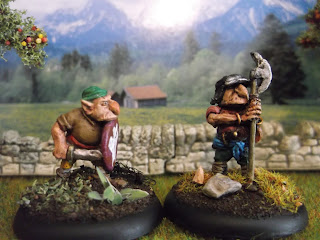 Left a FTG16 Goblin with short sword and shield.
Right another FTG1 Great Goblin/Gnoll, with a 'Stone Age' stone on his base.
A bit of one of the apple trees is just sneaking in the top left hand of the photograph. 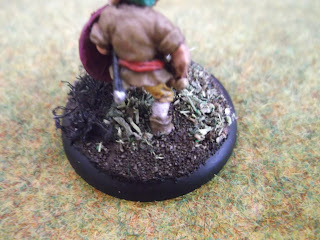 Close up of the FTG16 Goblins base. On the left of the base is the dark looking flock named 'The Black Forest'. On the right of the base is some of the 'Goblin Grasslands'. 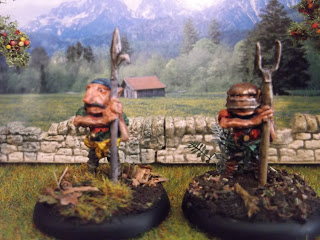 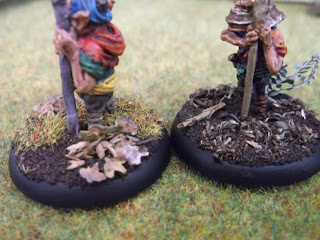 On the left are a few of the leaves from the 'Ancient Forest' pack.
On the right is some of the 'Conspiracy of Rats' pack, and a 'Noch' Fern. 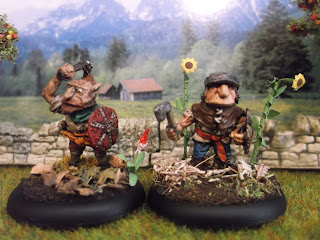 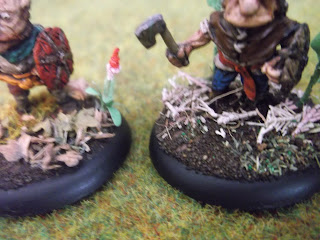 Close up of the bases.
On the left, more leaves. On the right some 'Spiky Grass', and a little 'Emerald Elf Havens'. 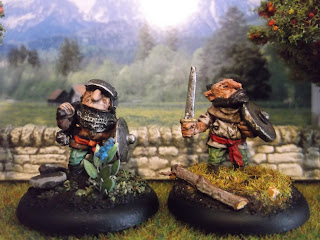 Two more FTG3 Great Goblin/Gnoll standing with Hand Weapon.
The Goblin on the left has a pair of 'Stone Age' stones. There's a little bit of supeglue staining it dark, making it look damp. 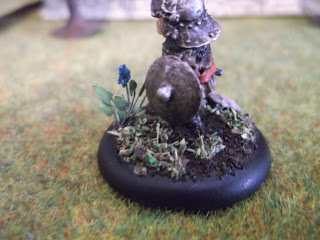 Close up of base with some 'Goblin Grasslands' and a little 'Noch' Nosta.
I am quite pleased with how his Sallet came out, all battered and old. 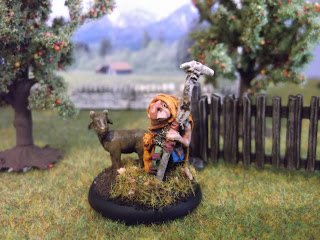 FTG15 Great Goblin/Gnoll Priest with Mace. He is also listed as a C12 Goblin.
Next to him is a Fantasy Specials FS70 Sacrifical Goat. I have had the Goat for ages and thought he would look good on the base of the Great Goblin/Gnoll Priest.
The basing is just normal Gaugemaster flock with bits of cork in it.
In the background are the Apple Trees, and part of a plastic fence I bought from e-bay and painted.
I love the way the background card, wall, and fence, give a sense of depth to the photograph. 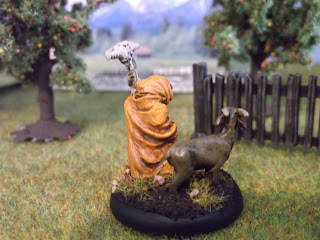 Next weeks blog update will be more Great Goblins/Gnolls, as well as a couple of other old solid bases miniatures I have been painting.
Posted by Goblin Lee at 21:33