Just a little update this week. I have been painting a few more of the Great Goblins/Gnolls on the 30mm bases.

I am really enjoying painting them. It has really re-kindled my love of fantasy miniautres, and especially the 'Fantasy Tribes' ranges of miniatures from the early to mid 1980's. I have been enjoying re-visiting not only the Great Goblins/Gnolls, but other parts of the early ranges such as the Dwarves, Trolls, and Giants, many of which were just starting to be phased out when I started collecting/gaming in 1986. I have recently bought  a few more Dwarves, but more of that in a later update.

Basing the Great Goblins/Gnolls on 30mm bases has, I feel, given the miniatures more room to be appreciated for their own individual charm and character, as well as allowed me to add more decoration to the bases than I would have normally. Here are the lastest half-dozen Great Goblins/Gnolls. The photographs came out a little less than 100%, I think due to the sun finally coming out in Sussex and providing a lot of glare, and so they look a little more bleached in tone than they really are.
Enjoy :) 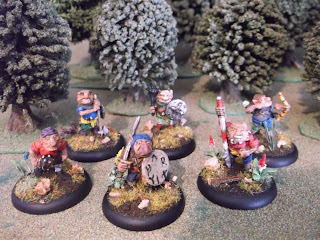 Half a dozen Great Goblins/Gnolls. 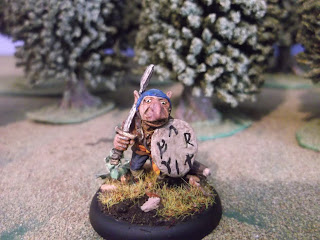 FTG3 Gnoll/Goblin standing with hand weapon.
I had orginally attempted to paint a grinning Goblin face on the shield as per many old 1980's 'Eavy Metal articles (White Dwarf #101 in this case). However my attempt failed and so I painted on some Dwarven Runes taken from the back of the Lord of the Rings, which spell out 'GOBLIN'.
I am going to attempt to paint face sheilds again, but need to practice first. 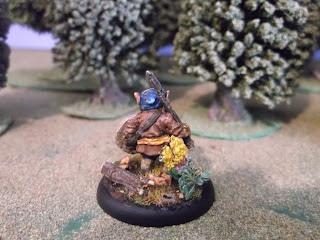 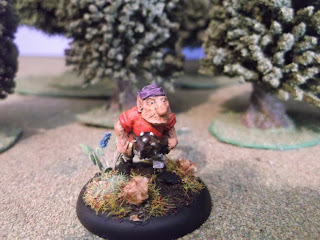 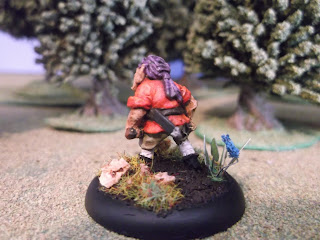 Rear view.
I wanted to show the sculpting on the legs. Looking at them it looks like he is wearing knee breeches and stockings, with shoes, more in line with 18th Century fashion. 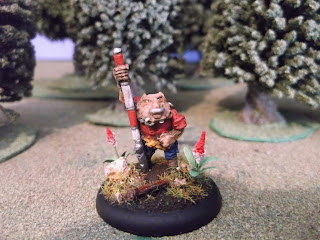 Another C12 Great Goblin/Gnoll, this time with a big spear.
The spear itself has what look likes rings around the shaft , and so I painted them as such and then alternated the colours. 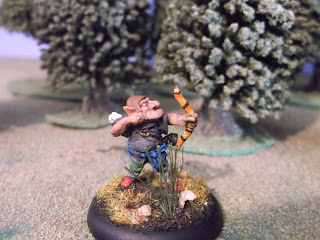 C12 Great Goblin/Gnoll Archer.
I am very pleased to have collected 10 Great Goblin/Gnoll archers as they are not always very easy find. This gives me a little unit of 10 to skirmish and generally cause a nuisance.
The idea of nuisance got me thinking about the archers role themselves. They would not be in amssed ranks as per Agincourt, but more skrmishing and 'nipping' at the flanks of the enemy. So with that in mind I have painted his bow in the colours of a snake, in this case a Cornsnake' from the USA. I will be painting all the bows, in different patterns and colours of snakes. 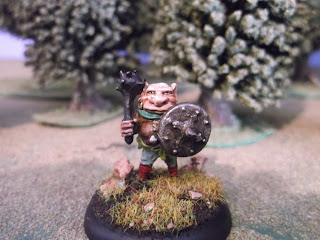 Yet another C12 Great Goblin/Gnoll with club and shield.
He is slighty portly for a Goblin, but looks like he would be the anchor in a Goblin shieldwall (as much as any Goblin could be with a Leadership of 5!). 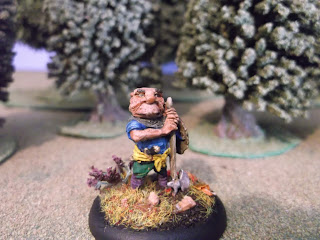 Finally a FTG 1 Great Goblin/Gnoll with Polearm, in this case a Pole-Axe. 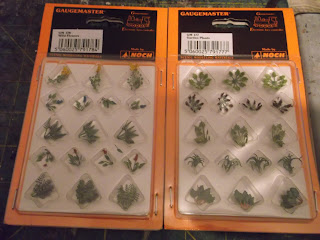 More ickle tiny flowers for bases!
These are awesome and are primarly made for Model Railways, but fit nicely with 28mm miniatures (I have used a couple on the Goblins above).
The company is based in Ford along the coast, so might pop along to their shop to buy more and check out more of the range. 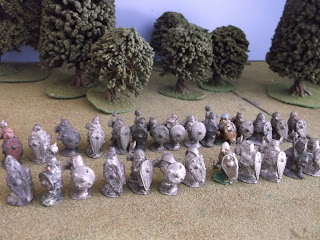 Hairy Great Goblins/Gnolls
No wait, they are actually, Fantasy Tribe Dwarf (FTD) range. ;)
I have just recently purchased some of these to add to my existing ones.
I also really love these miniatures, as they, like the Great Goblins/Gnolls, are full of character. I will be detailing my plans for these in the next blog update.