Before the release Warhammer 40,000 Rogue Trader in the latter part of 1987, there was a small release of Sci Fi miniatures, some of which were destined to be a part of the game. One set of these were what is now know as 'The First 40,000 (Rogue Trader) releases'. These were a set of 14 miniatures shown below:

Recently I managed to aquire the last two miniatures I needed to complete the set; the Dark Elf Trooper (thank you Steve Casey), and the Imperial Bodyguard.
I had originally bought some of the set in the summer of 1987, just before Rogue Trader was released, I bought the Orc, Goblin, and two of the Human Troopers all in one blisterpack. Over the years I picked up many of the others, most of them being relatively common to find and being present in other ranges. Only the Piscean Warrior and Pirate were not widely released, but I managed to buy both by chance in the late 1990's.

So as I had finally completed the set I thought I should now paint them as a set. I decided to paint and base each of them in an individual manner to suggest the breath and diversity of the 40k universe and the differing environments. Also, it allowed me to play around with different types of bases and colour schemes without having to paint an entire squad/army.

I really quite like the set of miniatures. They capture the pre/early Rogue Trader era which I like, and are a diverse collection of individual models whose quality of sculpting and design still, in my opinion, stand up today. It was great fun to paint them up in different paint schemes, and with different bases. I'm also pleased with how they look photographed in different terrian. 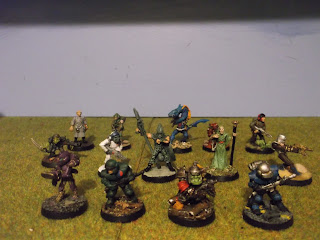 The complete set of the First Rogue Trader releases. 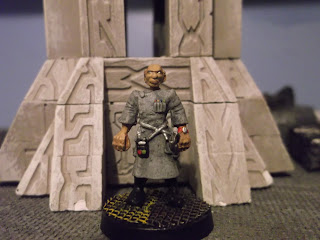 Telepath.
Personally I think this miniature bears a striking resemblance to the Talsiman Timescape 'Scientist', and also  Lando Calrissian's servants, the Lobots, from 'The Empire Strikes Back'.
He also does'nt look much like a Telepath, but more of a Techpriest, which is what he was later listed as in the Citadel 'Blue Catalogue', but not before being also listed as a Telepath!
I have painted him in a workman like dull grey coat, and given him a base reminiscent of a metal walkway in a research facility. I painted his eyes silver on a whim to suggest some sort of implant. 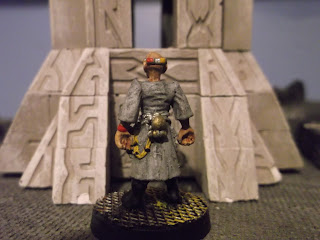 Rear view showing some sort of device, and the implant on the back of his head. 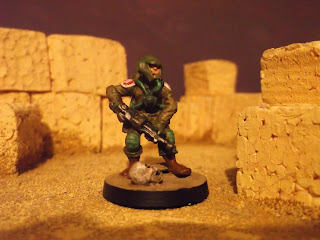 Ground Combat Trooper.
This model bears more than a passing look of a 'Souther Trooper' from the 2000AD comic strip 'Rogue Trooper'. This is'nt suprising as not only were Games Workshop working on their Rogue Trooper game at the same time, but I am sure many of the GW staff were fans of it.
So, I have painted the miniature up to look like a 'Souther', even giving him a desolate Nu-Earth looking base.
Incedently, the shoulder pad had what looked like a '7' on it, but as it was quite lacking in depth, I painted the 'Souther' symbol over it.
He was later released in the RT7 Mercenaries under the name 'Abbadon'. 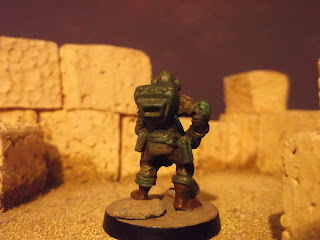 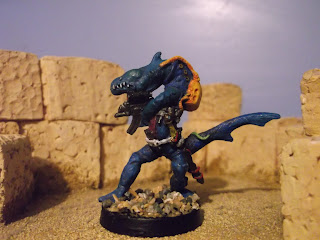 The Piscean Warrior.
(also know later as a Saharduin).
This is one on my favourite miniatures, and was only avaliable for a short time in 1987, and so is consequently quite rare now.
He is basically a humanoid shark with a sub-machine gun and what looks like a powersword. He is wearing some sort of environment suit, probably stopping him from drying out.
He was never part of the Rogue Trader Bestiary, and no rules were released, but they were sometimes mentioned in backgrounds. 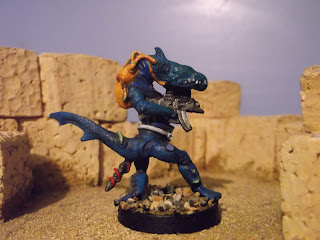 The right side showing the gun and backpack clearer. 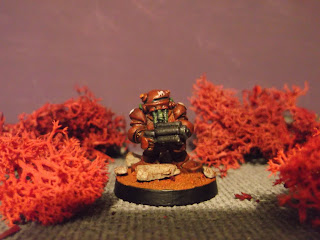 Space Dwarf.
A small (even by later Squat standards) Space Dwarf in power armour.
He reminded me of the some of the Sci Fi book covers from the 1960's/70's and so I painted him up in a slightly retro looking colour, and strange alien world base.
The Space Dwarf found his way into two further ranges. First he ended up in the RT7 Mercenaries range as 'Irn-Bonce The Squat'. He later ended up in the main Squat range as 'Grenade Launcher'. 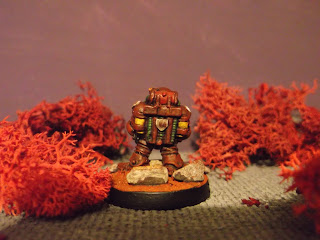 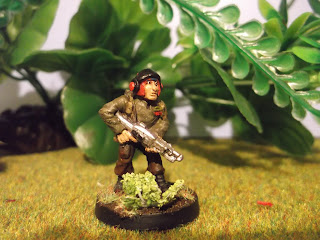 Imperial Garrison Trooper.
A human member of the Imperial Army armed with what appears to be a Las-gun. I have painted him up a as a standard looking Army Trooper, looking slightly like a World War 2 American GI. I have him a red colour combat helmet to give a more sci fi touch.
This miniature too ended up as part of the RT7 Mercenaries range, named 'Kyla Condotti'. 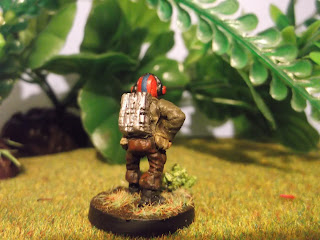 Rear view showing the powerpack for the las-gun. 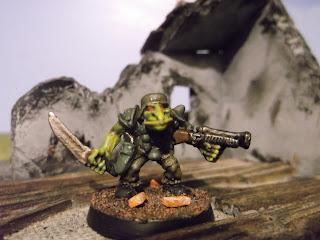 Space Goblin.
This lovely little critter has a shotgun and hunting knife, and is wearing a Stahlhelm.
He is listed as a Space Goblin, as being released before Rogue Trader, he would'nt have been listed as a  Gretchin. He ended up in the Gretchin range later on, and spawned an alternative sculpt in that range too.
Given his Stahlhelm I thought he would look good painted in Wehrmacht colours.
I painted the base to look like a ruined World War 2 townscape, using some tiny little bricks from e-bay and giving the brown base a drybrush of 'Light Brick' coloured paint. 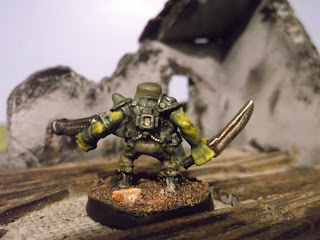 Rear view with a power pack. 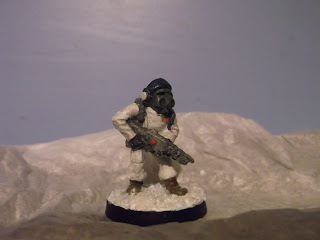 Imperial Light Trooper.
This miniature is a conversion of the Imperial Garrison Trooper, and basically the same miniature but with a gas mask sculpted on.
I have painted him up in snow camo as I thought he was slightly 'Star Wars' looking, and I wanted to try out using snow basing.
Again he ended up in the RT7 Mercinaires range, named 'No-Face Fargo'. 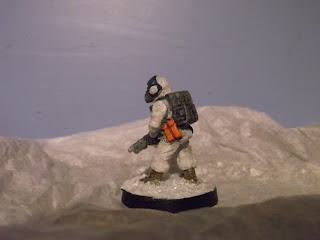 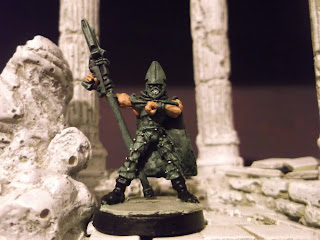 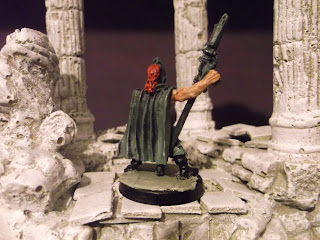 Rear view.
I based him on marble flagstone looking tiles, made from plasticard. 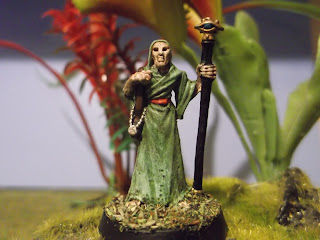 Imperial Psycher.
The above name was the orginal spelling, later changed to Psyker. This miniature later found his way into the RT601 Adventurers ranges as 'Astropath Yerl'. This makes sense as he looks more like an Astropath.
Incedently, he can also be found in the same artwork on page 135 as the Adeptus Custodes.
I painted him up in the green robes of the Adeptus Astra Telepathica, as outlined in the Rogue Trader Rulebook (page 141). 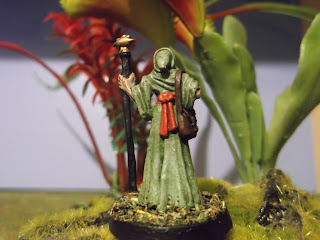 Rear view.
I thought I would paint the sash red as it complements the green. I painted the staff black to suggest a Force Rod. 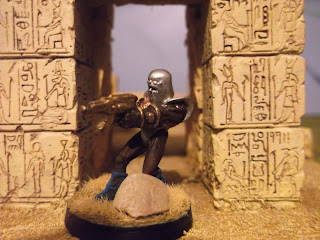 Pirate.
This minitaure is a conversion from a Citadel C01 Fighters series miniature named Cedric. He has had his sword replaced with a gun, which is used in the Judge Dredd ranges.
Although he looks a little like Ned Kelly with the helmet, he also looked more 1960/70's campy type of Sci-fi. So I painted him up in a silver suit and with a gold gun.
In line with this I based him up in a typical Star Trek: Orginal Series looking base. 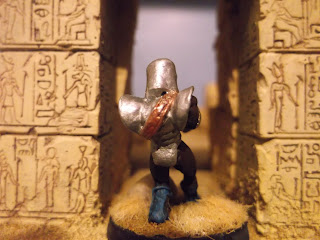 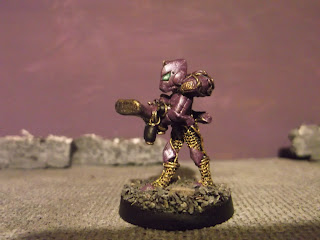 Dark Elf Space Trooper.
This is the miniature which eldued for a long time, and I was'nt disappointed.
Long before the Dark Eldar this miniature was produced. His mesh/chainmail like armour is similar to the later Eldar miniatures, as are the helm and armour plates. However he or she (it's not easy to be sure, looking at the chest plates it might be female) has a slightly different, more slender feel to it.
I painted the miniature purple and gold as I always envisioned it in my minds eye these colours, I wanted to have a non releastic colour scheme, and one not close to the Eldar. 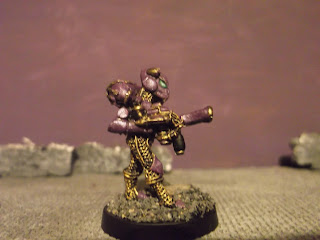 Right view showing more of the armour, and the strange gun. It looks like a form of flamer. 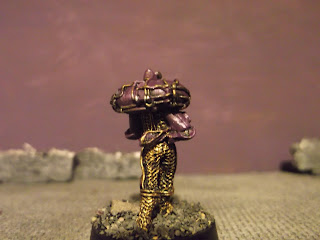 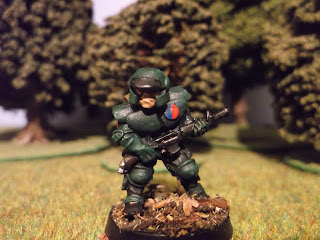 Imperial Heavy Trooper.
This human is, as his name suggests, wearing some heavy chest and shoulder armour, as well as elbow, knee, foot armour, a heavy helmet, and gauntlets.
In addition he is armed with an Auto-gun.
He too ended up in the RT7 Mercenaries range, as 'Fast-Star John', before finally ending up in the Rogue Trader era Imperial Guard range. 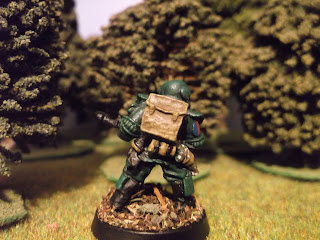 Rear view showing his backpack, pistol, and other equipment.
I painted him up in temperate woodland colours, and did the base to match. 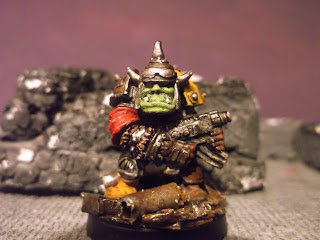 Space Orc with Blaster.
First thing to notice is he is an Orc, not Ork. Orc with a 'k' did'nt appear until Rogue Trader was released. Some people don't like the spelling, but I think is fun and gave the Ork's a differnet and more Sci fi feel.
He is armed with a Blaster, another name given to Bolt guns as well as maybe borrowed from Star Wars.
I painted him up as more of a pirate and scavanger type, with oddments of clothes and armour, and based him as though he is scavenging in a junkyard or onboard a deralict space hulk.
This miniature ended up being very widely released in the more general Rogue Trader Space Ork range, and was also the basis for a couple of variant sculpts in Space Ork releases in 1988/9. 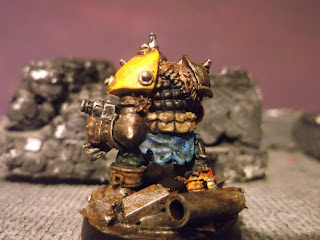 Rear view showing the armour and the raggedy clothes.
The rusty rubbish on the base is made from old bits of chopped up plastic sprue, a few cut out plasti card tiles, a bit of lead sprue, and a cut up lollipop stick! 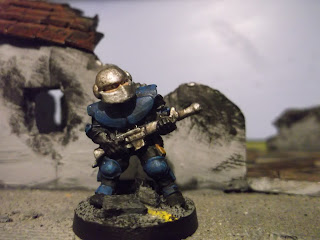 Imperial Heavy Infantry.
This Infantryman is a variant sculpt on the Imperial Heavy Trooper. He is the same miniature except that the head and helmet are different, and he has a different backpack (see below).
He is painted up from a piece of artwork on page 188 of the Roge Trader Rulebook. He represents 'Amry- Trooper of Gian's Legion'. I did vary the paint scheme a little, painting the kneepads and boot armour blue instead of black, to be in keeping with the rest of the armour.
I gave him an urban ruined base to lighten up the look of the model from the blue and black, and also because I had'nt done an urban base for this range of miniatures.
Like many others, he also ended up in the RT7 Mercenaries range, as 'Space-Doubt Sam'. He also made it to the Rogue Trader era Imperial Guard range. 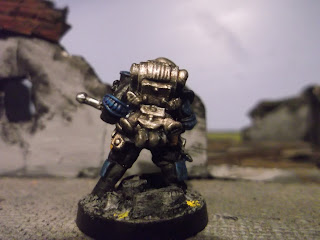 Rear view, showing the different backpack.
The backpack is the same as the sculpted on backpack on the C100 Space Marines range from 1986.

This weeks update has been delayed by work, and as next week is Bank Holiday I am sure next weeks update may be as well. I am not sure what I will be painting this week. I have taken a short break on the 'Goblin Wars' to paint the above miniatures, and am currently sorting out some 'Secrets of the Third Riech British from West Wind, which I purchased recently. So I have a mind to paint a few of those before returning to the Goblins. :)
Posted by Goblin Lee at 17:37