As of today I have reached 85,987 views of my blog!! That is something I find really incredible considering I only started the blog in April 2013, updating about once a week on my latest random project. Again I would like to say thank you to everyone who has viewed my blog and takes an interest in my collection.

In the last week or so I have wanted to, and I felt I have, tackled a little problem.
Ignoring the terrible pun, I have wanted to find a good paint scheme for my C27 Pygmies. As many people familar with the range may know, the Pygmies are 3rd Edition Warhammer Fantasy Battle allies to the Slann. They are designed to be jungle dwelling savages in the fantasy South/Meso-American background that is Lustria.

The sculpts are however loosely based on Africans (there is an argument that they could be based on the  Olmec, although whether the Olmecs were African or Native American is a debate in itself) and have a Zulu look to them and thier shields and weapons. They are also, to be honest, slightly caricaturistic and could be, especially if you consider them to be African, slightly racist. The exaggerated big lips and bone through the nose don't help.

Now I am not going to get into another big debate on the the range, although an interesting debate with links happened earlier on my blog here...
http://goblinlee.blogspot.co.uk/2015/03/bonus-time-pygmies-and-few-slann.html

...as my main reason for me collecting Pygmies is as an ally to my Slann army, and as these were miniatures used at the time (1984 to 1992, basically 2nd and 3rd Edition Warhammer Fantasy Battle), that is the reason for collecting them. Now to tone down the possible 'racist' or caracture look of them, to link them more with to the Slann and the pseudo Pre-Columbian American/Amazonian Indian look, and to make them look colourful, I decided to painted them with colourful warpaint.

Painting wise I was wanted to give the impression that each of the untis of the Pygmies were from different tibes. So to achieve this I gave each unit different warpaint schemes. When it comes to all things Lustrian I am always inspired by the 'Magnificent Sven' scenario from Warhammer 2nd Edition. This is true for the Pygmies as well. Even though they do not take part in the scenario, there is a mention of them in the background of 'Karl Ustracutter', mentioning that one of his previous expeditions was "...ambushed by a confederation of six cannibal tribes". I took the idea of a confederation of Pygmy tribes as the basis for my Pygmy Ally Contingent, and also as a good excuse to paint them with different warpaint schemes to vary the colours.
Enjoy :) 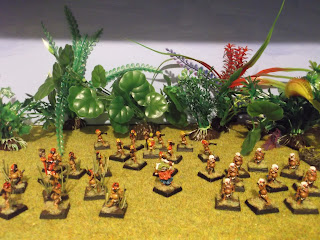 31 Pygmies.
I have painted two units of 10 Scouts, one unit of Pygmy Braves, and one Shaman.
The units are consist of three different miniatures; 'Puff', 'Ahg', and the 'Standard Bearer', as well as one 'Shaman' miniature. 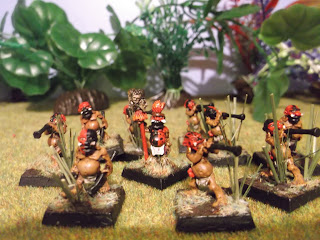 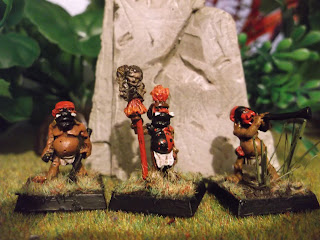 'Puff', 'Ahg', and the 'Standard Bearer'.
I chose a a mix of black and red warpaint for this unit. To highlight the indiviualistic nature of Scouts, I have painted each Pygmies warpaint with different designs. I used pictures of Amazonian Indians as a basis for inspiration. 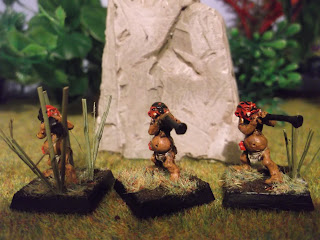 More Scouts.
This unit is one I had painted last year, and so all I did was add warpaint, and swap in a Standard Bearer. 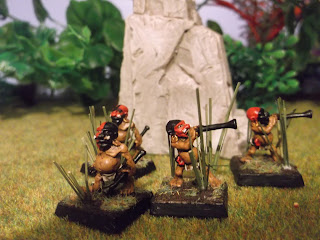 Last four.
I like Blowpipes as weapons in 3rd Edition. The D6 strength attack can be a nasty suprise to an enemy, and I find that Scout units can harass enemy flanks quite nicely. 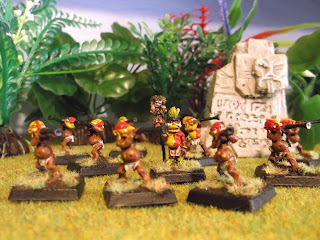 The second Pygmy Scout unit.
Apart from the Standard Bearer, I decided to just use the 'Puff' miniature for this unit. 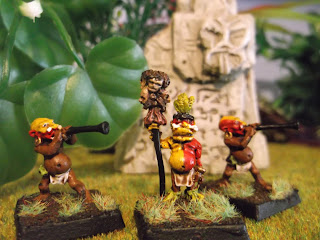 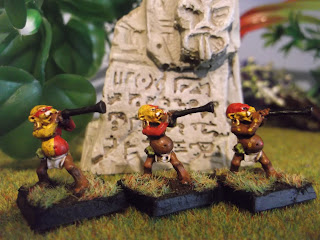 Three Scouts, this time with body warpaint as well. 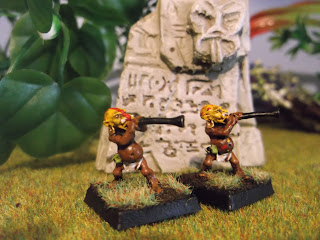 Two more Scouts.
I painted the feathers of the blow darts green rather than red, so as not to clash with the warpaint. 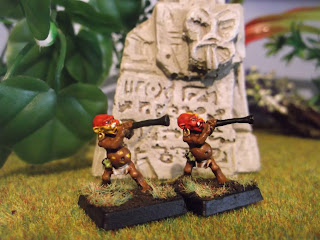 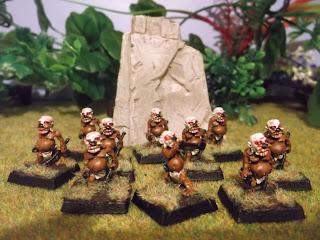 10 Pygmy Braves.
Unlike the Scouts, I did'nt give them a Standard bearer.
I am not sure if they are allowed to skirmish, Warhammer Armies is a little unclear on whether allies can Skirmishers or not. Even if they could, a Standard Bearer would be a waste of points and only useful if they were to engage in melee with other skirmishers. 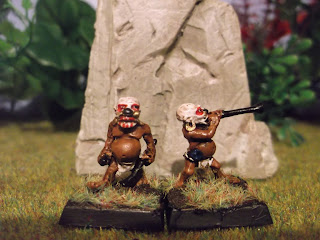 The unit is composed of nine of the 'Agh' miniature, and one 'Puff' who acts as the unit champion.
I went for a skull, almost Mexican looking, style of warpaint.
Also, as painting the bone through the nose would not show up very well against the white warpaint, I painted it gold. Many Indian tribes around Colombia used a lot of gold nose pieces and jewellery (before the Spainish took most of it!).
With a couple of the warpaint schemes I plan to paint the bone either gold, jade green, or turquoise. I think this will add to the colour of the models, and also again tone down the caracture look. 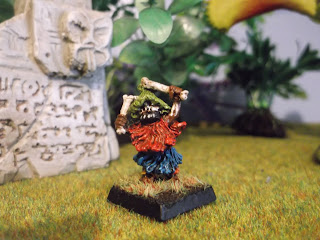 Pygmy Shaman, a Level 15 Wizard.
The miniature is sculpted with what looks like grass skirts and hat. I painted these more colourful and ritual to suggest they were dyed, and gave him a skeletal warpaint. 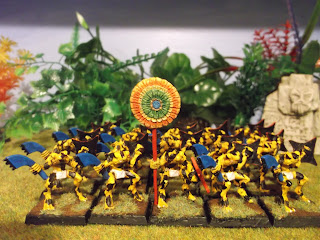 Slann.
Apart from the Pygmies, I wanted to re-visit this unit of Jungle Braves Slann. I was not happy with the large shields they had, so I swapped them for smaller ones. I also added a little more brown shading to the yellow flesh colour.
I also tinkered with the standard, adding little more colour to it. 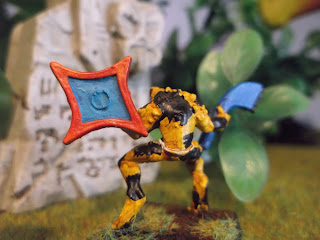 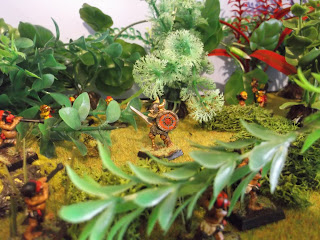 Karl Ustracutter has a few Pygmy problems somewhere deep in the Jungle!


I had intended to paint more Pygmies, perhaps even completing the Ally Contingents.
However as it's 'Orctober' ( http://ernysplace.blogspot.co.uk/2015/09/orctober-is-here.html ), I have been sorting out my old Mithril Miniatures Mordor Orc Army (yes, an army of Mithril Miniatures) with an eye to re/painting them, so I shall see where my muse takes me.
Posted by Goblin Lee at 12:55