For those of you unaware, Mithril Miniatures are a miniatures company based in Ireland (with their sister company 'Prince August')  who gained the rights to produce miniatures based on Tolkiens writings when GW lost the rights in 1987. Their website is here: http://www.mithril.ie/

Their miniatures are designed to be pieces used for viginettes, one offs, or skirmishers, and collecting, rather than actual wargaming. In addition they are also normally supplied pre-primed in their special grey undercoat, although most of the time the extra metal arms/weapons/etc with the miniature are'nt. The reason I think they use the grey undercoat is it brings out the details on the miniatures nicely when in the blister pack. The grey undercoat is fine to work with, although I sometimes find that it does'nt always hold the paint as well as black, and so I usually therefore give them a black wash before painting. 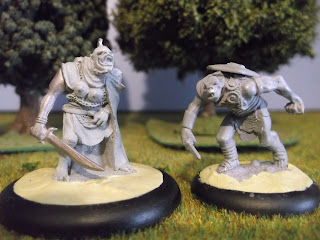 'Ugluk' and 'Grishnakh', in their Mithril Miniatures grey primer (re-based on 30mm and 25mm bases respectively).

Mithril Miniatures did make one brief forray into Wargaming in 1994 with their Orcs of Mordor and Gondor box sets, but the Tolkien Estate (for some reason) took a dim view of this and, as I understand (but could be wrong), suggested it was a breach of licence. This was exactly when I was taking an interest in Mithril.

I had seen Mithril Miniatures from early on in my collecting and they had always intrigued me, but I was more focused on Warhammer and at the time I had'nt even read the books! By 1994 I was thoughly disenchanted with 4th Edition Warhammer and 2nd Edition 40k, and I had just finally read the Hobbit, Lord of the Rings, and was about to read the Silmarillion (which I did). I like the scultp of te Orcs, although less keen on some of their interpretations of other races, many of which have weird looking eyes and very high foreheads.

Anyway, this was at the exact time that Mithril made its short lived foray into wargaming miniatures by releasing the Warband boxsets, the Orcs of Mordor (MW336) , and Men of Gondor (MW337). 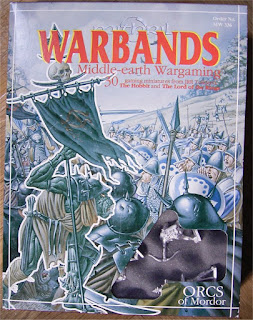 The Orcs of Mordor (MW336) boxset (this is an internet piccy, I can't find my ones they could be anywhere. I did find some 40k Beastmen which was great, but that's kind of irrelevant to this post. :)  )

So I bought three of the Orc boxsets, and two of the Gondorian ones (from the now long closed 'Albion Armouries' shop in Brighton), thus giving me a good basis for both armies. I painted them up over the time in 1994/5, adding odds and ends as I went, and half forgot about them in the late 1990's. In 2000, with the release of Peter Jacksons god awful films Lord of the Rings Trilogy, the Orcs saw action again for a while as proxy miniatures for GW's spin-off game.

And then they were forgotten about again for well over a decade until this Oldhammer 'Orctober'. So I sorted out the Orcs I already had, I did a small mail order to Mithril Miniatures (who seem to be very nice people), and based a lot of them up. I have'nt, due to work, illness, and a myriad of other reasons, really re/painted many, but here's the few I have done...
Enjoy :) 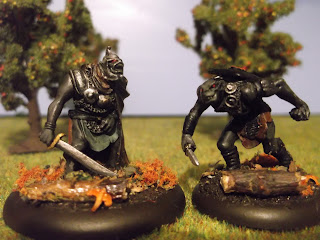 Two Orcs with an intertwined fate in the 'Two Towers'.
On the left is M178 'Ugluk', and on the right MS504 'Grishnakh'.
I have based 'Ugluk' on a 30mm base like all of my Mithril Uruk-Hai, and 'Grishnakh' on 25mm base, like all of my Mithril Orcs.
When basing I went for a mix of woodland and Autumn flocks and basing materials. When I think of Middle Earth, I always for some reason think of it in Autumn, perhaps because I find it a magical time of the year. I also painted the base edges dark brown to blend more with the woodland feel. 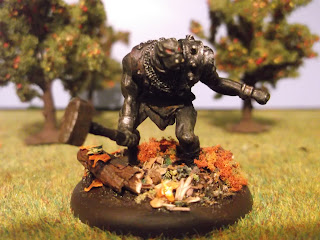 M333 Lugburz Great Uruk.
He's a big Uruk, and unlike 'Ugluk', only just fits on the base. The lipped bases are good at hiding the solid bases. 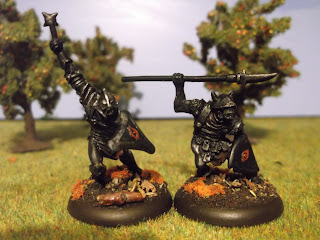 Two Orcs of Mordor.
Left an armoured Orc M313, and the right the spearman from MC29 Orcs of Mordor blister.
For the skin tone of the Orcs, the Uruk-Hai, and Trolls, I used a light drybrush of Vallejo German Field Grey WWII. I wanted to go for a dark black/grey tone to the flesh as more Tolkiens description. I also went for dark weapons and equipment to keep with the 'Land of Shadow' feel. 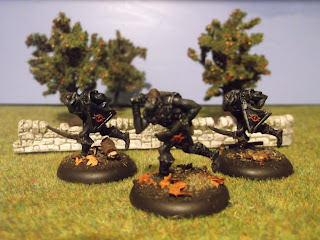 Three Orcs from the Orcs of Mordor (MW336) boxset.
Unlike most other Mithril Miniatures, the boxset miniatures were not grey primed.
I like many of the boxset models as they are running, and it gives a good feel for the Orcs of Middle Earth, who always seem to be running to or away from some place to another. 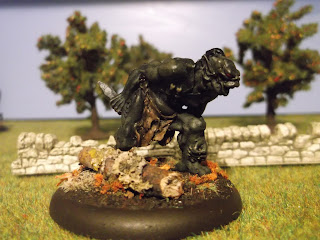 Troll.
M174 Cave Troll of the Under Deeps.
Although a Cave Troll I have pressed him into the service of Mordor.
He is based on a 40mm base. 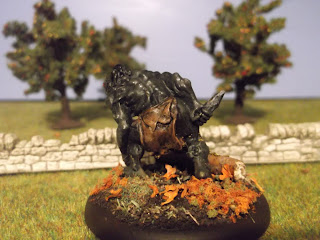 Rear view, showing more of the base.
I do enjoy doing the Autumnal bases. 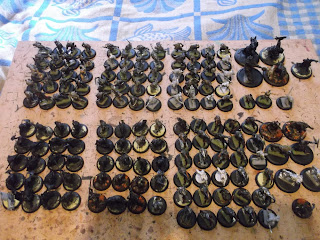 A not very good photograph of my Mithril Miniatures Mordor Orc Army WIP.
It consists of 100 Orc Infantry (divided into five regiments of 20); 30 Orc Archers (divided in three regiments of 10); 4 Trolls and 1 Olog-Hai; 6 Uruk-Hai (on the bigger 30mm bases); 1 Orc Animist; 1 Orc, and 1 Human Tracker; and of course Grishnakh.
Not shown in the photograph I also can add 5 Warg Riders (including the Salute 2008 one); a Werewolf; Nazgul; and a couple of Haradrian. 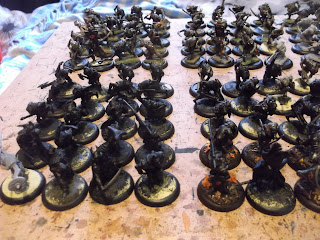 Closer on the left. 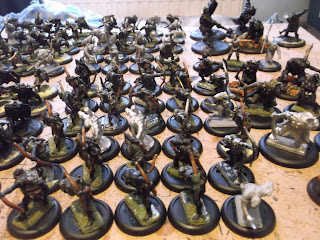 Close on the right.
Due to the delicate nature of the bow shafts, I have had to make a couple of repairs over the years. 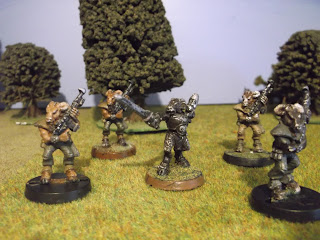 ...and here are the 40k Beastmen I found, in need of some painting.

Unfortunately for the Orcs of Mordor I don't intend continuing painting them into November and beyond. I'm not really in the mood for Tolkien or have the desire enough to focus on it as a project. I have been sorting out something I have wanted to tackle for a while, but first need to spend some time sorting before I post. 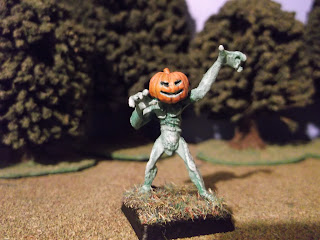