Back to blogging, and to Land Raiders!

I have had a bit of a break from blogging over the last fortnight. A busy time at work, coupled with that I have'nt been painting much meant that my blog has taken a little bit of a back seat. However I have still been buying items for the Tratior Legions, and I did manage to get some painting done.

I have been painting the World Eater Legion recently, and thought that I had finished all of the Tactical Squads required for the army. I had however miscounted, and still have two squads of eight Renegades to paint.

In addition I have started painting the mounts for two of the Assault squads. I have replaced the Space Marine Lizard mounts with Vincent Black Shadow Motorbikes for one of the squads. I did this as I wanted to use all ten of the mounts (the World Eater only have a need for eight), so have reassigned them to the Sons of Horus/Black Legion army. Also, I think Motorbikes fit the raw aggressive, thoaty roaring feel of the World Eaters better.  The other squad is to be mounted on Mk14 Bullock Jetcycles. I have managed to mostly paint the Jetcycles and motorbikes, with only a little left to do, leaving only the riders to paint.

Apart from the Assault Squad mounts, I decided to paint a tank, specifically a Land Raider. I have always liked the Khornate Land Raider in the 'Slaves to Darkness' book (see photograph below), and despite my wish not to get involved in painting tanks yet, the army did'nt seem right without one painted up. I tried to keep the paint scheme as close the book as much as possible. I might still add a flag or Khornate rune on the doors.

This focus on a Land Raider led me to look on e-bay for another. I already have one Land Raider for the World Eaters, one for the Emperor's Children, and one which will need to be re-paint for either the Sons of Horus or Ultramarines. So after a little look, I found one in mint condition in box (albeit a 1994/2nd Edition box) and still on the sprues for £50. It might seem a little pricey, but they are becoming a little hard to find in good condition, and also in comparison the Forgeworld Proteus is £88. Not sure which Legion will benefit from this addition, perhaps the Emperor's Children as I could paint it in pastels like some of the Slaaneshi Marines will be? As it's complete and in great condtion, it might go to the Ultramarines.
Enjoy :) 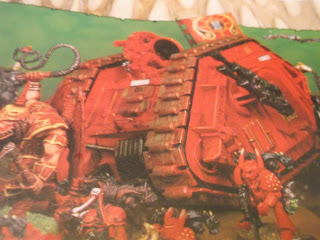 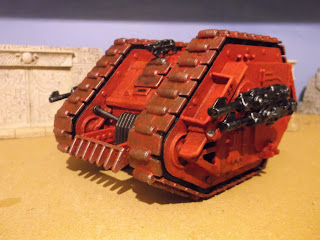 I chose the old and slightly more battered Land Raider I owned for the World Eaters.
I re-painted the hull and tracks with GW Evil Sun Scarlet (the new version of GW Blood Red) over a black undercoat.
For the hull I then gave another coat of red for fuller coverage and depth, and then highlighted with a mix of red and orange. Then the whole thing recieved a thinned down black paint wash.
For the tracks, to get that ruddy look, I drybrushed GW Mournfang Brown (the new version of Bestial Brown) lightly over the tracks. Then I drybrushed silver over that, before giving the whole thing a coat of thinned down black paint. 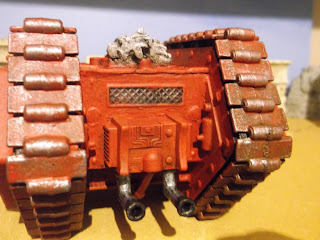 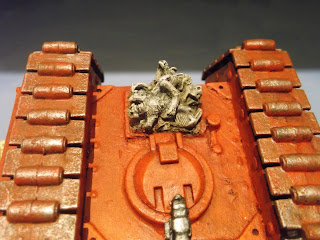 One of the problems of using this old battered Land Raider was that the top door hatches were missing. So I added a bile of bones fron the 1980's Night Horrors ranges to cover the hole, and to suggest the collected bones of their enemies. 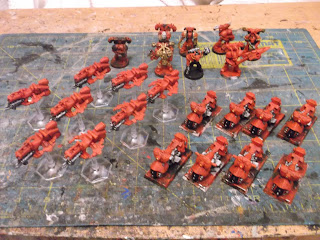 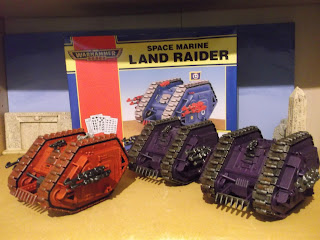 The four Landraiders!
The two purple ones are left over from my halted attempt at painting the Emperor's Children some years ago. The paint is'nt that thick so they can be re-painted or stripped if needed. 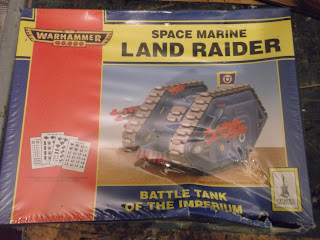 Land Raider, mint in box.
The box had at sometime been damaged, but the kit inside was fine. 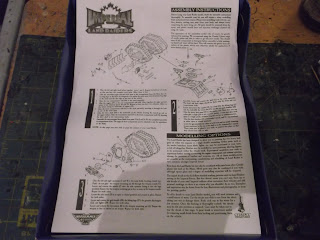 Instructions on how to build. 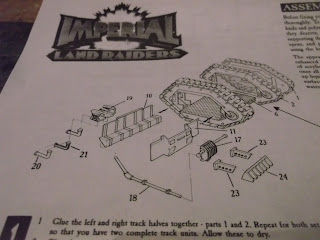 Close up.
It's been over 25 years since I assembled one of these!!! 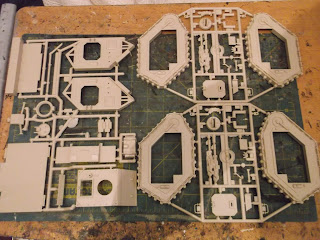 No idea what the next update will be on. I do want to take photographs of each of the Legions so far to give an impression of the crazy project I have started. I do also want to get some proper amount of painting done as well.