Mid-Febuary and the painting of snakemen is progressing nicely.

Apart from five C27 Snakemen, I have painted three Grenadier Miniatures Cthulu range Serpentmen, and a 'Realm of Chaos' era Chaos Champion from 1988. 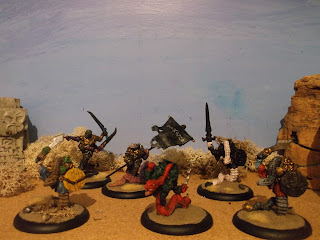 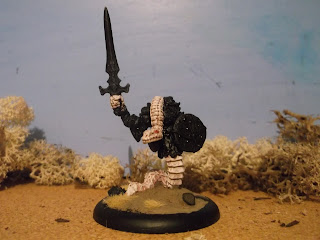 The first of the S'lararet Splintered Fang's.
I have converted and painted this Snakeman up to be either a unit hero or independent hero, and framed him to be an aspect of Michael Moorcock's Eternal Champion. I liked the idea that the Eternal Champion can be an aspect that can be throughout space, time, and alternative universes, and so thought I would have a Snakeman 'Eternal Champion'. I swapped his sword for an old plastic Chaos Marine one, to look like a sibling of Stormbringer, and painted him albino and in black armour. 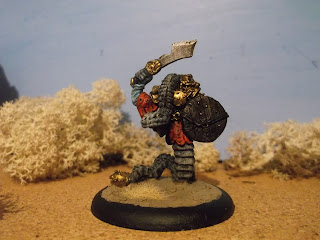 Another S'lararet Splintered Fang, painted up as a grey Snake. 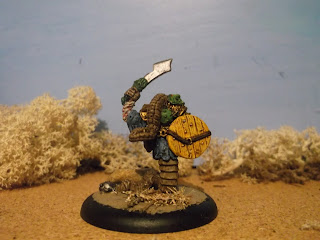 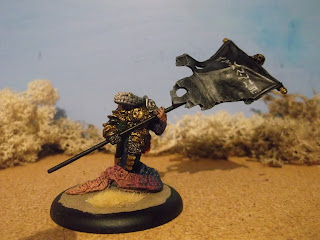 A converted S'Sirron Fangthrane, converted into a standard bearer.
I snipped off the axe and axe sharft, and the drilled through the hands, adding a brass rod. I then added a plastic standard from GW's current Grave Guard set.
With GW's current Tzeentch releases, I have borrowed the look and painted this Snakeman in a flow of colours, blending pink, to red/purple, to blue/s, to grey, to give a Tzeentchian magic feel. 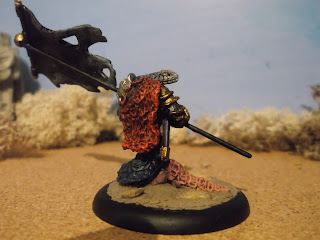 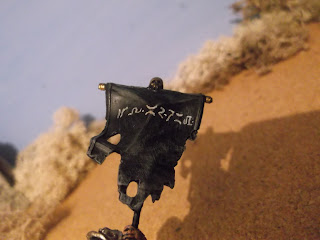 Close up of the standard.
As the Snakeman is quite colourful, I went for a darker, more muted standard. The runes are from the 1st Edition Warhammer supplement 'Forces of Fantasy'. It reads S'nethen, the name Chaz Elliot gave the Snakemen in the background he gave them. 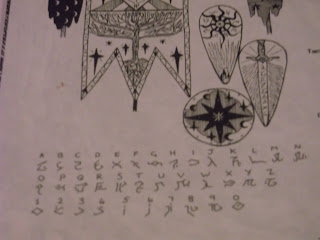 The runes from the Forces of Fantasy supplement. They are in the Dark Elf section. 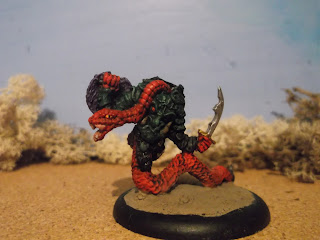 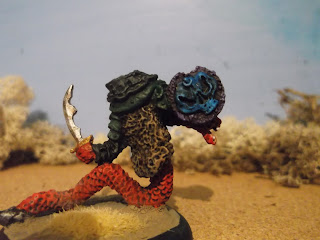 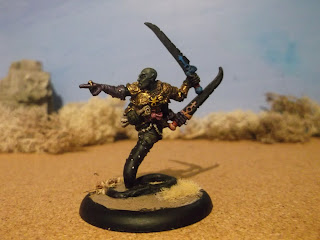 Slaaneshi Champion.
Now the Snakeman army is'nt Slaaneshi, however being serpentine I thought that this Chaos Champion might fit in nicely. I think of him (or her, or Hermophrotite?) as a Snakeman who has mutated into this form, rather than a humaniod who has mutated with serpentine features. Close up.
I went for a green skin to suggest a Snakemen origin, and painted snake-like eyes. Streotypically, I painted the male rune on the sword blue, the femal one pink. I kept with the gold armour colour to tie in with the rest of the Snakemen. 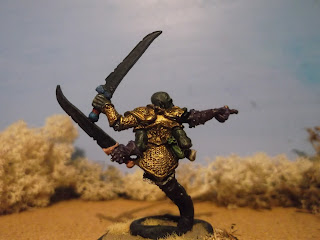 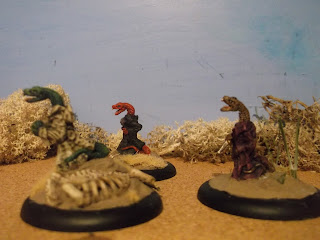 Grenadier Miniatures Cthulu range Serpentmen.
These critters are a lot smaller than the Citadel C27 Snakeman range. However to overcome this I have built up the bases with Milliput and added stuff to the bases to make them look less small.
I will use these as Chaos Sorcerers as they are smaller than the warriors, unarmoured, and less armed.
There are three sculpts: an unarmed; armed with a dagger; armed with a stone axe. 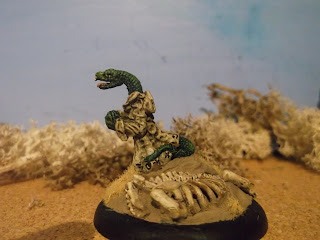 Unarmed with part of the skeleton of a plastic horde horse on the base. 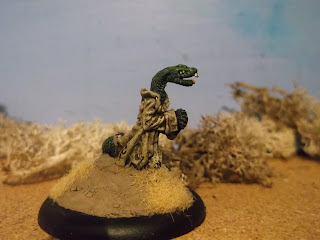 Right hand side.
I painted a few random magical runes from the Force of Fantasy artwork of a Goblin Mage. 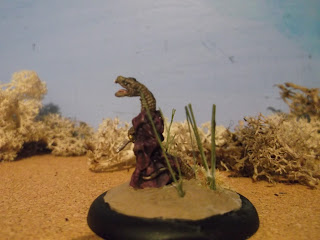 Serpentman with dagger.
I painted him up with Rattle Snake skin.
I have noticed that the superglue I use on the base has turned a little white, and so will fix this later. I thought that the long grasses make the Serpent Man appear to be emerging from long grass with a dagger, ready in ambush. 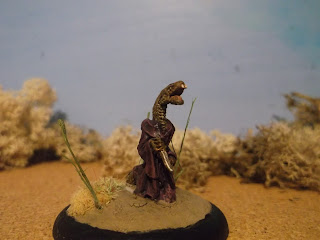 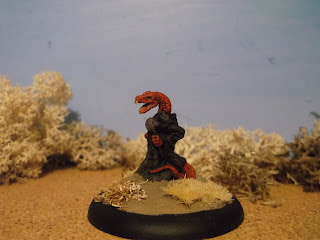 Axe armed Serpent man. He is armed with a stone axe, and I went for a dark brown robe to contrast with the bright red skin. 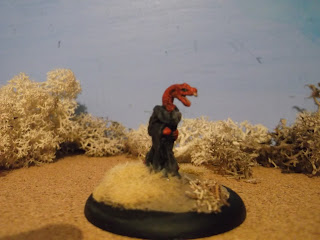 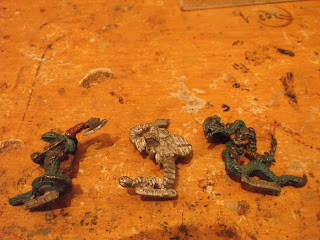 Next update will be more Snakemen and other add-ons of the army.
Posted by Goblin Lee at 21:19