I was on holiday last week, and so, bizarrely, I actually never got around to doing any painting, despite the extra free time!

However, in the last week I have painted six more Snakemen, and a Bob Olley Iron Claw range Harpy. I have put the NSFW up because she is naked. As for the Snakemen, who are also, in theory, scantily clad, I have finally painted three of the standards for the units I have already painted. In addition I painted three more warriors. I ended up painting five Saranth Elf Mangler's, and one Higgat Dwarf Slicer.

In addition, I have been sorting out a lot other parts of my collections. Once the Snakemen are finished, I want to return to sorting out an army for each of the entries in the Warhammer Armies book. Although I did orignally have a painted army for most of the entires, I have removed some of the miniatures from them, mainly solid based ones and 1980's Lord of the Rings range, as I wanted them to be in seperate collections. So I still have some painting to do on some of the older armies.

Also, I have been on and off collecting 1980's Lord of the Rings miniatures (since the 1980's in fact!), with an eye to having a couple of little skirmish forces. I did a blog update a few years ago on this, and also would like to re-visit the idea. In the last few months I have picked up some more of the old 1980's Uruk-Hai models designed by Jes Goodwin, and would like to paint these up as Uruk-Hai of Saruman. 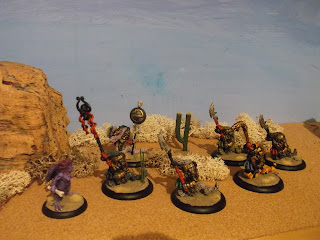 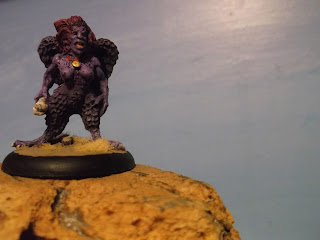 Bob Olley Harpy.
I wanted a magically bound Harpy in the army to fly around and annoy people. I have had her in a box for years, and painted her up on a whim. I thought purples might make a change and make her look more magical (not in a Disney way of course!), although the brightness of the colours does'nt seem to have come out in the photograph. 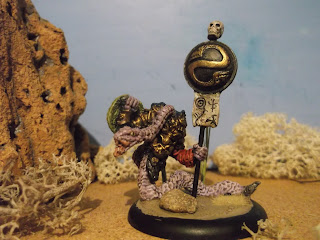 A conversion of  Higgat Dwarf Slicer.
The conversion was very simple. The blade of his sword had snapped off, so I clipped the rest of the sword off, drilled a hole through the hand, added brass rod, a skull, an old Maruader Miniatures shield. I then green stuffed a little banner under the shield to make it look less like a lollipop.
The magical symbols are are copied from 1st Edition Warhammer's forces of Fantasy supplement.
I painted him light purple after I found out there is a purple snake in real life; the Lavander Corn Snake. It looks suitably Chaotic as well. 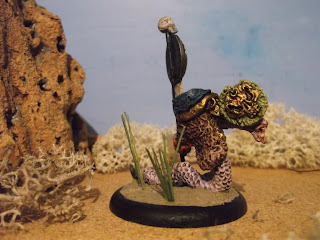 Rear view.
I green stuffed the back of the shield on the standard to make it look more substantial. 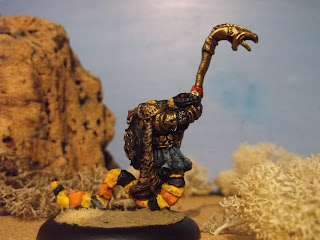 The first of five Saranth Elf Mangler's.
This one has been converted into a standard bearer but cutting off the remains of his broken halberd, and drilling down into the shaft. I then added a straightened Elf horn from Jes Goodwin's Citadel Elven Heroes range. I thought the poking out tongue seemed appropiate for the Snakemen, as if magically tasting the air. 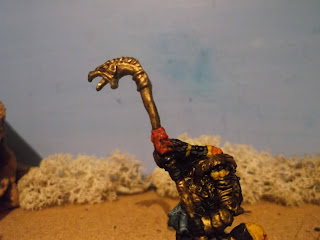 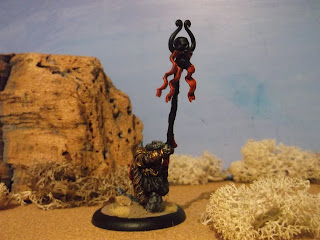 The second Saranth Elf Mangler converted standard bearer, again from a broken Snakeman from e-bay.
I added a long piece of brass rod, and then on the top I added the standard top from Citadels Tomb Kings Necropolis Knights set. To give it all more substance, I green stuffed the shaft to add thickness. 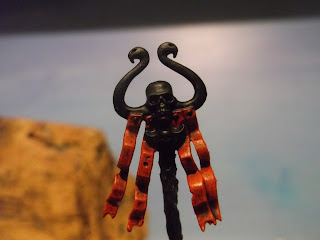 Close up of the standard head.
It reminds me of the standand of Thulsa Doom in the film 'Conan the Barbarian' (the 1982 version, of course!). 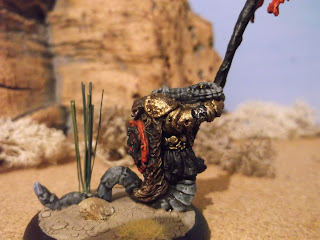 Right hand view.
I am quite pleased with how the grey skin came out. I also matched the colours of the shield to the standard as well. 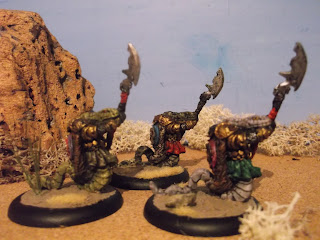 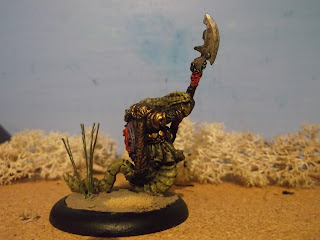 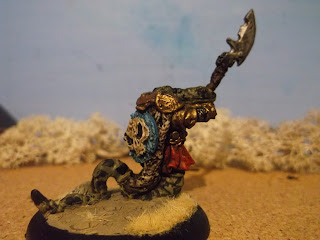 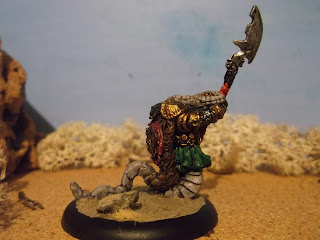 Another grey Saranth Elf Mangler.
I painted this one Warpfiend grey to give a slight Slaaneshi look. 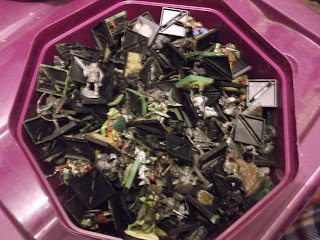 I found a box of Orcs whilst sorting out stuff. There's about 100 or so solid based Orcs in there. I will sort them out properly and photograph them at some point.
Next update will be more Snakemen. Whilst I had almost got to the end of painting them all, I ended up buying some more. So, more to paint!!!