As a precursor to painting my Melnibonean army, I have painted a couple of test models.

Now I had already painted some test models for them some time ago, painting them in gold armour, but I was unhappy with the result. As a fan of Rodney Matthews artwork and of Michael Moorcock's concept of the Multiverse, I wanted my Melniboneans to stand out from just being gold or metal clad variations of generic fantasy models.

So, I have opted for a very colourful palette of colours for the armour, horses, and equipment. Rodney Matthews artwork provides very varied, almost clashingly colourful artwork for some of Michael Moorcock's writings. In addition, Moorcock himself describes Iymmrr and the Melnibonean's themselves as clad in a variety of colours, both bright and pastel. So I wanted to relflect this in my painting.

I will update more on Matthews artwork, and the links to the Melnibonean army in a later update. For now here are the two new test models I have painted. Both are the Citadel Miniatures Eternal Champion range EC06 Melnibonean Cavalry miniature 'Dyvim Traash', mounted on the horse 'Hawkswoop'. 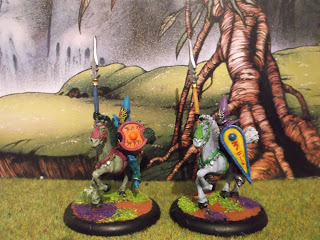 Both 'Dyvim Traash'.
Whilst I have based them on lipped 40mm round bases, I am considering rebasing them, and the Melnibonean army on more conventional Warhammer gaming bases for gaming. Although the infantry should be on 20mm square, they might end up up on 25mm, as the miniatures themselve are large and also deserve more room.
I have gone for odd looking bases, with bright flock on top of redish looking desert bases (Citadel Martian Ironcrust) to give that other worldly looking feel.
The backdrop is the Rodney Matthews artwork 'In Search of Forever'. 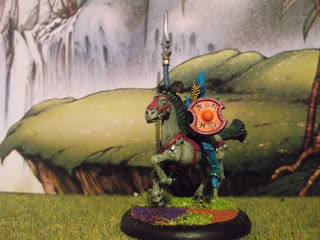 I have painted this 'Dyvim Traash' in turquiose armour, with a shield bearing runes from a Matthews artwork. I wanted an other dimension look to both them and the horses, and so have opted for colourful armour, and non-standard horse colours. The green horse in similar that of demi-horses from a Matthews artwork entitled 'Obsidian Castle', used for an the Elric short story 'Elric at the End of Time'. 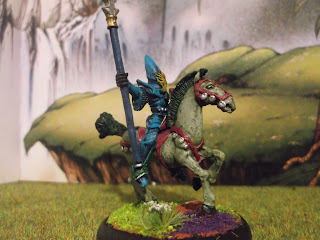 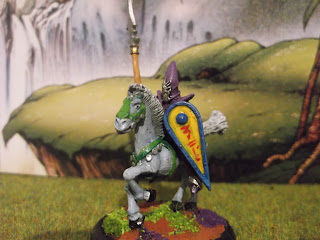 The other  'Dyvim Traash'.
I opted for a paler horse, and contrasting purple armour.
The runes again are from a Matthews artwork.
I have a problem with this miniatures in that I tried out GW's ardcoat varnish. To my horror, and despite asking in the shop, the varnish turned out to be very gloss. Whilst I have painted over most of the part of the miniature that looked really bad shiny, the model still has a shine to it. :(
Back to Vallejo varnish for me! 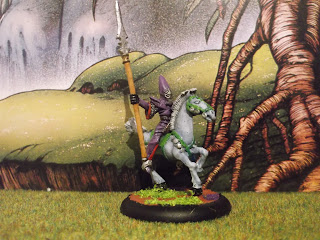 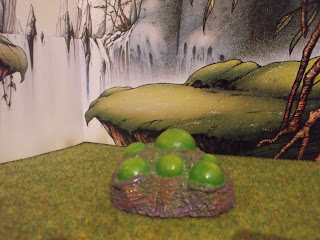 Weird scenery.
In addition to the two 'Dyvim Traash's', I repainted an old piece of bizarre scenery from Ground Zero Games I had bought long ago in the 1990's. It fits the odd looking art of Rodney Matthews, as well as useful for any sci-fi encounter. 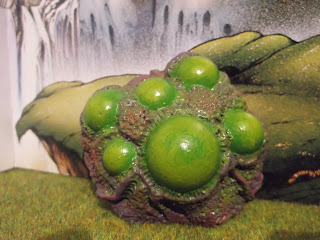 Next update could be anything. After finishing the Dark Elves I have several projects I might tackle. I also might photograph my 1990's Dark Eldar army as an update.
Posted by Goblin Lee at 22:28