Whilst I am still painting my Pan Tang army, I decided to paint up a few miniatures as an aside which I have had for a long time. Please note that this post is NSFW due to the scantly clad nature of the Nymphs.

A fairly long time ago (about 2001) I bought some Nymphs which were at the time produced by Wargames Foundry. The range are a selection of female Nymphs which I think have been sculpted to look like a cross between Victorian Nymphs/Fairies, and the Fey drawn by Alan Lee and Brian Froud in their wonderful book: Fairies. Some of the range are dressed in garlands of flowers, and twee dresses slightly remincent of what some people considered 'Pagan' looking in the 18th, 19th and early 20th centuries. Think 'Rites of Spring' or Greek Classical revival. Others have Classical looking or 'Pagan' looking armour, whilst other are naked or semi nude.

The miniatures themselves are lovely and fun to paint. However the ones I purchased had terrible mould lines, and the solid metal bases of some of them are tiny, making them tricky to afix to the bases without using Milliput. I cannot comment if this is still the case or I had a duff batch.
They can still be bought from Warmonger Miniatures here:

I purchased the Nymphs with an idea of assembling an alternative Wood Elf army. I bought a few, painted a couple badly, and then shelved the idea. The main problem I had at the time was that being scantly clad, an army of them seemed a little sleazy. However now I decided to paint strip the ones I had painted before and revisit the idea.

The miniatures fit an idea I have for my Elven armies. I want to have one army for each of the seasons, and painted as such. The Nymphs, with their rites of Spring look, will suit the Season of Spring. I have the High Elf army consisting mostly of Elwings Regiment of Renown for Summer. The Wood Elf army I have already painted will stand for Autumn; and the Dark Elves, with their cold hearts, for Winter.

Painting wise I wanted the army not to be just scantly clad Elves, but an army of Elves that are at one with the forests and are actually Tree Nymphs. So I opted for a palette of greens, to give them that forest look. For the metal I will only use gold, being the metal used for collecting Mistletoe by Druids, and also that the Fey don't like iron. They were very quick to paint, all five taking little more than an hour.

I intend at some point collecting a full army. Apart from the five here I have another seven, plus some of Wargames Foundrys / Warmongers Revenant Elves to add. Considering that they are from £4 each, it won't be a miniature heavy army, but I am sure I can sort out another 3,000 point 3rd Edition army, based on the Wood Elf army list. I also painted a huge Treeman for the army, which I have totally forgotten who produced it. 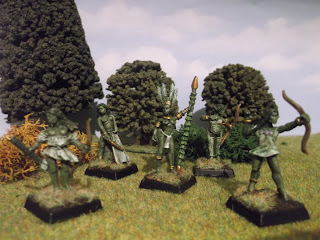 Nymphs.
They are mounted on 20mm square bases. 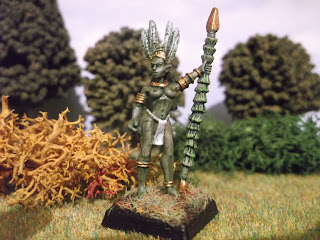 Nymph heroine.
I think that she was a limited edition miniature, and was meant to be an African Nymph. 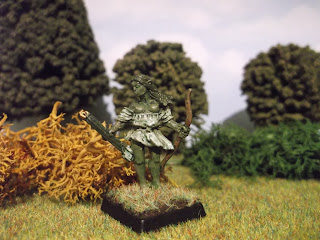 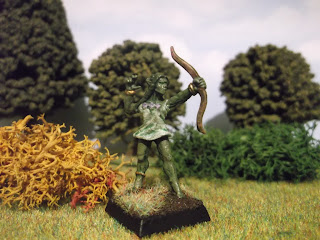 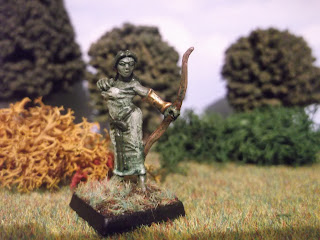 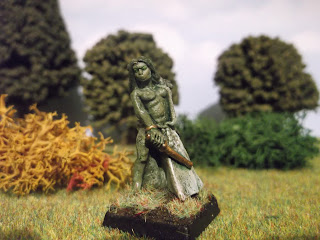 Short Sword.
She also has a wooden axe, but it is out of shot. 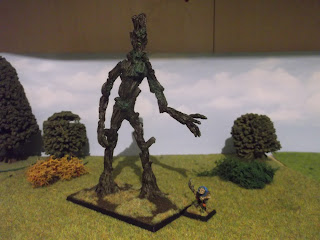 Huuuge Treeman!
The Goblin is there for scale. I have no idea who made this 'miniature', but I bought him at Salute about 10 to 15 years ago. He is metal, and came in three parts; body, and the arms. 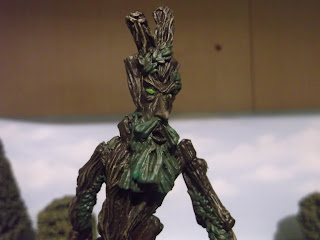 Close up of the face.
He was easy to paint, but time consuming. 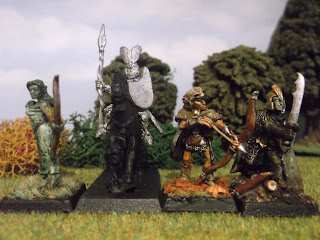 The Four Seasons of Elves.
From left to right:
Foundry Nymph for Spring; Elwing for Summer; Wood Elves for Autumn, Dark Elves for Winter.
For the Summer Elves I plan to add lots of flowers to the bases to suggest Summer meadows.
Next update will be Pan Tang. I have nearly finished the archers, and will be starting the Tigers very soon.
Posted by Goblin Lee at 20:44