An Orc for Orctober!

Just in time, I have painted an Orc for Orctober. I have'nt really been in the mood for painting, nor have I had the time, but instead I've been sorting out a lot of my miniatures into Oldhammer era only collections and armies.

I have taken all my Citadel Orcs and sorted them into four armies; three of them based on Lord of the Rings (Mordor, Minas Morgul, and White Hand), and one as group of Orcs for my 3rd Edition Warhammer army (which will be mainly Goblins, but require a few Orcs). I will take photographs in a few weks of the armies. With that in mind, I painted a Bob Olley Black Orc as an Uruk-Hai.

In addition, I have also been sorting out the Humans into seperate collections. My plan is to do an army for each of the Human nations, with the exception of Ind (for the time being, Citadel never really made 'Indian' miniatures so it might be less 'Oldhammer' only). I do have the basis for 3,000 point armies for the Empire, Bretonnian, Estalia, Tilea, The Border Princes, Kislev, Araby, Norse, Nippon/Cathy, and Albion! Again, I will photograph these as I get them sorted out of the next few weeks. 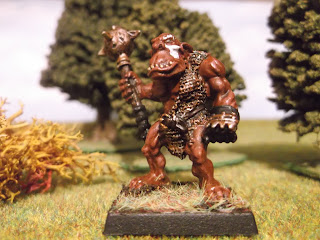 Black Orc/Uruk-Hai.
I dislike the Lord of the Rings films, but I do like the idea of painting the Uruk-Hai in a ruddy-brown flesh tone, especially to distinguish them from other Orcs.
I stole the idea of white hand face paint from a post on the Oldhammer Facebook Page. 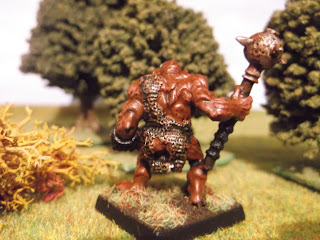 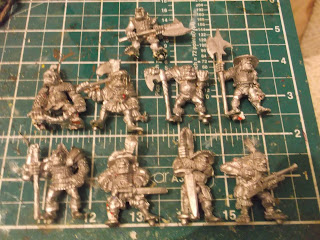 Fresh from the paint stripping pot: Marauder Miniatures MM41 Ogres, the MS4 Ogre Hero, and two MM42 Ogres. I purchased and painted these in the 1980's, but have paint stripped them with a mind to add them to the human armies as Mercenaries.

Next update will be the Pan Tang, as I am still really meant to be painting them, and want to finish the army soon. :)
Posted by Goblin Lee at 21:10