Recently I purchased a batch (or Spawning?) of 1980's Slann from e-bay. One of the the Slann in the batch is a Slann which I haven't seen before. I have collected several unreleased or rare Slann before, but I have never seen this one before.

He seems to be based on the sculpt of the released C32 Slann 'Zipanzuma' due to several similarities in sculpting. A few years ago, via the Oldhammer Facebook page, I spoke to Trish Carden (formally Morrison) who sculpted this range of Slann, and she stated that there were two reasons for the existence of unreleased Slann miniatures from this era (1985-7). The first was that some Slann miniatures who did'nt make it into production due to casting concerns. The second was that in the later 1980's, about 1988-90, some sculptors in the design studio converted some test pieces based on her original scuplts, with an aim for later Slann releases to revitalise the range. However, these sculpts, and the idea, was put to one side as there were more immediate priorities, namely the massive success and focus on 40k at the time.

As for the sculpt itself I have mixed feelings. I LOVE any 'new' old sculpts of Slann which I can find and buy. I do like that the Slann seems to be wearing a captured Old World/Norse mail coat. This fits into parts of the 2nd and 3rd Edition warhammer Slann background which suggests that some Slann are adpoting some of the new weapons and equipment brought from the Old World.

On the other hand,  I am not sure on the sculpt of the weapon(?). Is it a weapon, or a standard, is it meant to be made of metal, obsidian, or wood? The whole sculpt excellent, as per the era, but the miniature concept itself is ok. It's in the same vein as other miniatures from other ranges which create variants from one basic sculpt. However, unlike some of them it just seems too different be just a 'Zipanzuma' variant, and too similar in some details, such the helmet, to seem a very separate miniature. Still, I do like it and am glad to have it. :) 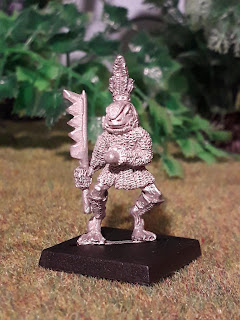 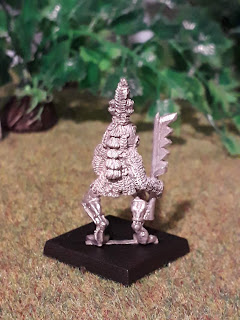 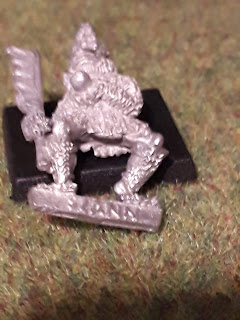 Tab.
It's a standard tab used on the Slann from this era. 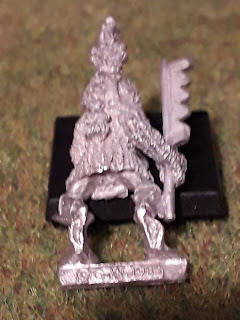 Rear view.
Again, a standard looking tab. It reads G.W 1985.
Both sides of the tab are the same as that which is found on the tab of 'Zipanzuma'. 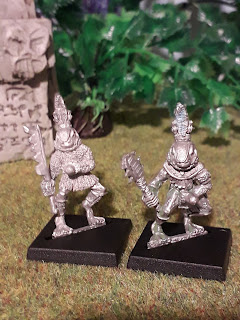 The variant and 'Zipanzuma'.
Next update will probably be some more Squats.
Posted by Goblin Lee at 21:27