A Happy New Year and all of that sort of thing. :)

In the closing few of weeks of 2020 I have managed to paint quite a few of the 4th Edition Chaos Dwarfs of large hat fame (or infamy, depending on your point of view).

Keeping with the 'industrial wasteland' concept, the Chaos Dwarfs are very quick and easy to paint. I have found that the bases are more involved than some of the painting. With the bases I have to paint them milliput the gaps of the slotta base, paint them black, add the sand, paint the sand, highlight the sand with (Fenrisian) grey, add the watch parts and skull, undercoat them, paint them -usually in a three stage process, and then varnish. Still, they look quite nice in my view, and add to that wasteland feel. I almost would like a 40k feel to the bases, similar to a Hive Ash Wasteland, but in a fantasy context.

I have been concentrating on the Blunderbuss armed Chaos Dwarfs first as I quite like the miniatures, and they are some of my favourites of the range. The also are quite iconic of the Chaos Dwarfs. It's nice to be able to get on with some painting as well. The Chaos Dwarfs, especially the Blunderbuss-ers are straight forward to paint and I feel as though I am getting somewhere by painting them. I have a lot (and I mean a lot!) of my more Oldhammer 1980's miniatures to paint, but the Chaos Dwarfs are less involved than they are. I'm also having fun painting them. I think this will allow me in  time to return to painting older miniatures with a fresher mind, and also being back in the habit of painting again. 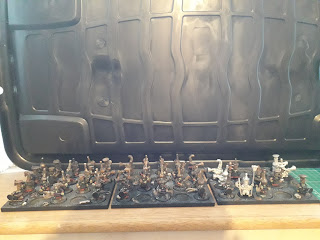 The three Blunderbuss Regiments, still a WIP.
Please excuse the state of the photographing. I am still in mid house renovations and so my painting table is deconstructed and I am using the spare bedroom window sill for photographing. If anyone is interested, I am using a pile of stacked boxes and a green cutting mat as a make shift painting table! LOL 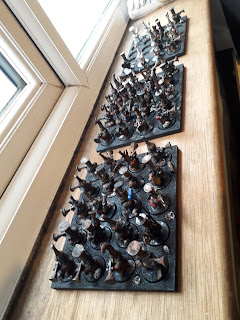 I little better photograph, but not greatly. 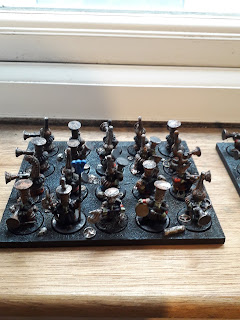 The first regiment.
I still need to finish painting the standard bearer and drummer. 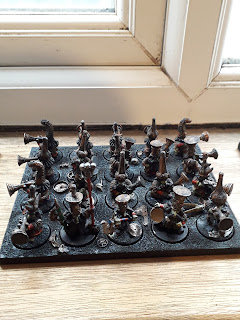 The second regiment.
I still need to finish painting the standard bearer and drummer here as well. 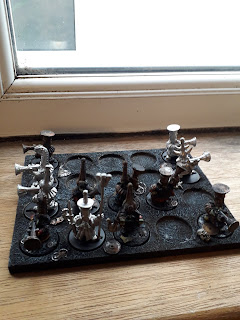 The third regiment.
This is still very much a collecting WIP group. I require seven more Blunderbuss, and a musician. 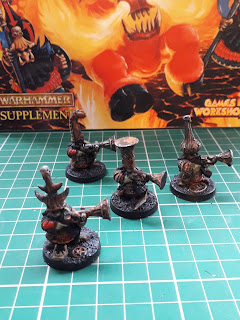 One each of the 'shooting' Chaos Dwarfs.
Please note metal detritus in the form of cogs and metal plates on the bases. These are watch parts purchased from e-bay and repainted in the same rusty look at the Chaos Dwarfs. The Skulsl are from Citadels current pack of Skulls, which are actually pretty good. 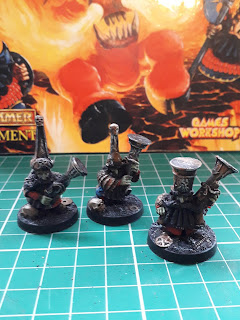 The 'standing' Chaos Dwarfs.
These form the centre of the regiments. I much prefer the firing versions as the hats are better. I might do a few hat swaps before I finish this regiment to give a little variety. 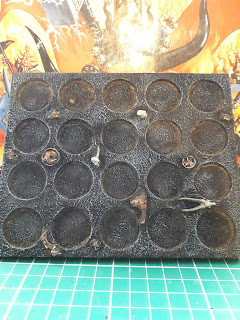 One of the three regiment bases. I should really have photographed all three, but this one gives a good idea of the three. I have added some of the same cogs and skulls as the bases, except taken the opportunity to use some of of the larger ones. These are the first ever movement trays/bases I have ever painted. I am quite impress with them. :) 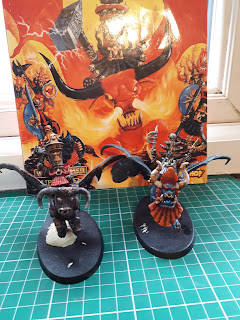 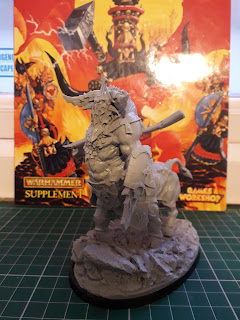 Hashut was very kind to me at Xmas.
I received the Shar'Tor the Executioner miniature, still available from Forge World. Although he is designed for the Age of Sigmar era Legion of Azgorh army, I thought he would make a lovely Bull Centaur Lord, or just to be himself if I used the Legion of Azgorh army list. I also like the miniature, and will have bought him at some point anyway. 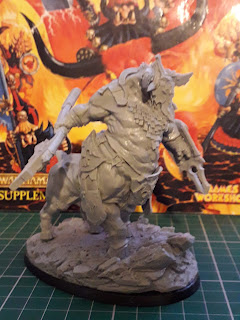 Side view.
It's a very big axe! 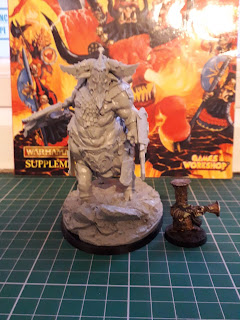 I have described him as a 'miniature', but he is a very large chap!
I will probably paint him in a few weeks time.

Next update will be more Chaos Dwarfs as I seem to be painting the army now. I would like to paint  few of the Hobgoblins too, I am, after all, Goblinlee! :)
Posted by Goblin Lee at 16:58