Allies (and a couple of enemies) of the Great Goblins/Gnolls.

Continuing in the same vein of me painting Great Goblins/Gnolls individually and on 30mm bases, I have added some old solid based Goblins allies, and a Troll to the mix. I have also painting up a couple of Dwarves too.

Well I say painted, a few (but not all) of the Goblins, and the Troll, were already painted by me some years ago. I have however re-visited the paintwork on those few and rebased all of them on the 30mm bases with all of the snazzy basing details added.

Now I am really enjoying painting up these miniatures and it has got me looking at all the other models I own from the Fantasy Tribes ranges, as well as the other pre-slotta Citadel miniatures from the 1980's. To me the models from this era are really evocative of 1st and 2nd Editions of  Warhammer Fantasy Battle, and I have a soft spot for 2nd Edition as it was the edition I started with a like the most. For me one of the most interesting parts of this era (apart from the Slann) is the 'Goblin/Dwarf War'.

A lot of the background for the 1st/2nd Edition era Goblin/Dwarf War focuses on, unsurprisingly, Goblins and Dwarves fighting each other, and the role of the various Regiments of Renown involved. So with that in mind I have decided to develop my idea of just painting up my Great Goblins/Gnolls on the 30mm bases, to include a broader range of Fantasy Tribes miniatures and early 1980's models which I feel would be relevant to the Goblin/Dwarf War era. These will include Dwarves, Great Goblins/Gnolls, ordinary Goblins (termed Night Goblins in the 1st Edition), Red Goblins, Lesser Goblins, Hobgoblins,Trolls, Ogres, Giants, and maybe some Halflings.  I will not be at this time consider adding any Orcs as I want to keep it to the various types of Goblins and their Troll/Ogre allies, but if I do they will be from the Fantasy Tribes range too.

In additon, I will also add the three Regiments of Renown which have direct participation in the Goblin/Dwarf Wars mentioned as part of their background: Bugmans Dwarves; Groms Goblin Guard; and Golgfag's Ogres. The idea is to just use miniatures from the 1st/2nd Edition era to give this project that early Warhammer feel. As I have both versions of the Regiments of Renown from the 1980's I don't have a problem with basing them on the 30mm bases. I also intend to paint up the SS4 Goblin Raiding Party set, and the C27 Chaos Goblin Mutants.

I will still be happily taking my time and treating each miniature individually, but will have a fun framework in which to paint the miniatures. I am also fortunate to have miniatures of the main personalites of the War, such as Grom, Bugman, Thorgrimm Brandedimm, Golgfag, Rug Longtooth, and several other named models from the era. I will do a 'personalites' update a little later. 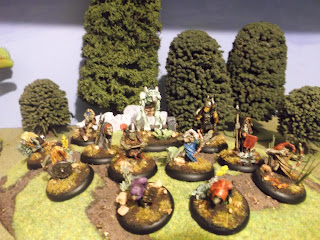 A hill of Goblins!!!
All of the miniatures are solid based Citadel from the early to mid 1980's. 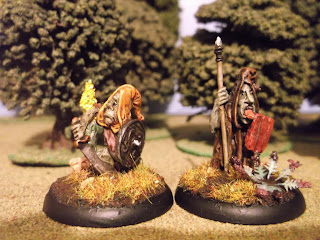 Two C13 Night Goblins, one with sword, the other with a spear.
I have followed the description in the 1st Edition Warhammer 'Forces of Fantasy' supplement regarding Night Goblins when painting their skin. For skin tone it suggests that the Goblins are a palid green, so have opted for a slightly more 'realistic' looking pale olive colour. 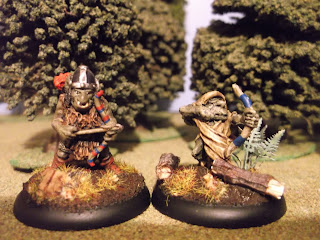 C13 Night Goblins with bows.
Unlike the Great Goblins/Gnoll bows, which I will paint up in snake skin pattern colours, the Night Goblin bows will be patterned, but not to any style. I think the painting the bows, and some weapon hafts, like this make them look more interesting and less just like a stick. I think that John Blanche painted some of his Orcs bows like this too back in the 1980's. 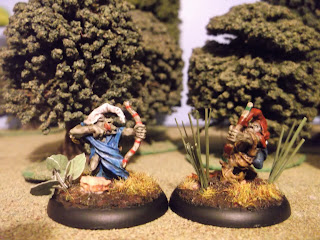 Two of the same C13 Night Goblin with bow.
The one on the right was bent over a little, so instead of straightening him out, I left him to look like he was leening around tall grasses, and then added the grasses accordingly. 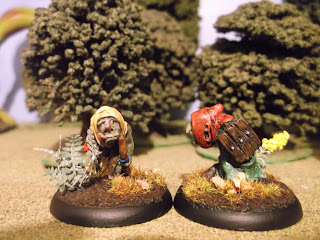 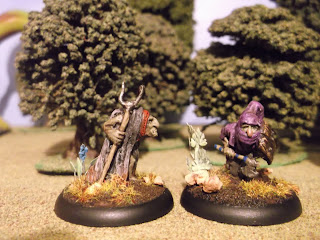 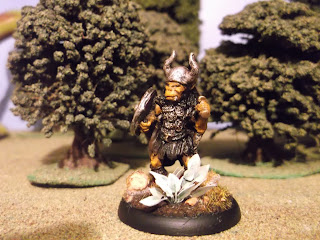 An early C36 Hobgoblin.
The very early Citadel Hobgoblins were not Far Eastern/Mongol in their design.
I like to think that these are more appropriate for the Goblin/Dwarf War, being more Western looking, before the Hobgoblins were pushed out of the West and into in the Badlands of the East.
I have painted him in the leathery orange flesh tone of the early 1980's style of Hobgoblins. 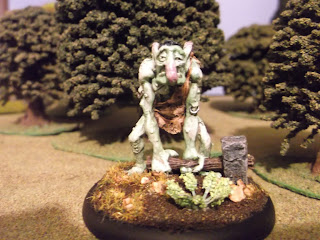 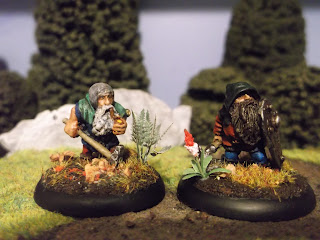 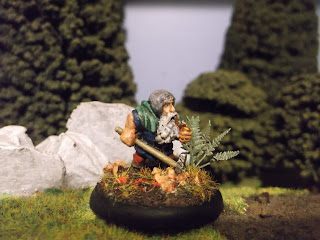 Dwarf smoking a pipe.
A lot of the FTD Dwarf miniatures seem to smoke pipes! :) 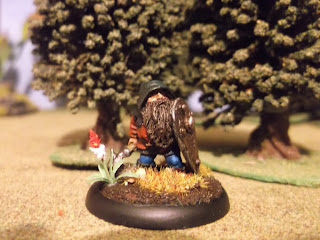 Another FTD Dwarf, this time a Dwarf from the 'shieldwall'. 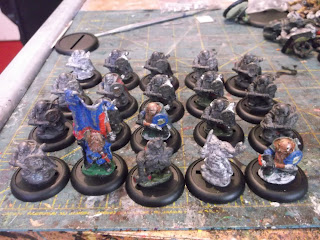 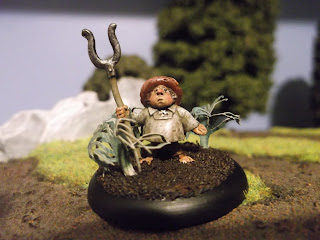 ...and now something from the late 1980's, a Marauder Miniatures Halfling.
I thought I would paint him up as a one-off and base him up as a farmer in his field of leeks. 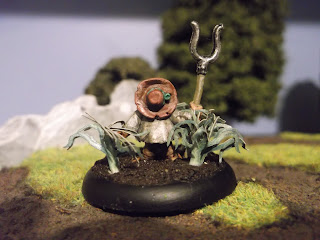 Next update will be more Great Goblins/Gnolls, which I haven't as of yet painted!!
I might, if I get time, also do a small piece on the Goblin/Dwarf War.
Posted by Goblin Lee at 21:41