Orcs of the Black Mountains: Harboth's and Notlob's Regiments of Renown.

Carrying on with my Goblin Wars theme, I have verted slightly into another two of the non-Goblin Regiments of Renown who are said to have taken part: Harboth's Black Mountain Boys, and Notlob's Orc Artillery.

Both Regiments are part of the first release of Citadel's Regiments of Renown series, 1984 amd 1985 respectively, and are both regiments of Orcs.

This is the first incarnation of Harboth's Regiment of Renown, being later re-sculpted as slotta based Orcs  armed with bows, and then being released in 1987. All of the miniatures are pre-slotta, with the exception of the Champion which was a later addition to the set, something which happened to several of the first sets of Regiments of Renown.

Catalogue page of Harboth's Black Mountain Boys.
...and a link to the background:
http://www.solegends.com/citrr/rr05harboth.htm

Notlob's Artillery on the other hand are all slotta based. The regiment was a lot smaller than the other Regiments of Renown, consisting of just four Orcs, and two Bolt Throwers.
The bolt throwers are what seems to be the original sculpt used as the basis for the later Orc and Dwarf  bolt throwers. The main differance of the later bolt throwers is that the base has an added spare bolt, and the top 'bow' part has a different spear head, bow arm and body details, and an added lever.
One of the Orcs (the one second from right below) ended up as a general release Orc crew member for the later Orc bolt thrower.

Catalogue page for Notlob's Regiment of Renown.
The name Notlob is taken from a Monty Python sketch about 'The Gangs of Bolton'.
...and another link to the background (Notlob's, not Monty Pythons!):
http://www.solegends.com/citrr/rr14notlobs.htm
Both sets of regiments are great and full of character. Harboths's have very varied and interesting command group, and nicely sculpted Trooper miniatures armed with the delightfully named 'Dwarf Tickler', a form of cleaver. They were fun to paint, and quite straight forward. I painted the Orcs skin tone slightly darker than the later 3rd Edition shades as I wanted a more 'realistic' and grubby looking feel to them. I kept the eyes red, but added a pupil.
Background wise (taken from the background stories from both Regiments) , both Harboth and Notlob's Regiments spent most of the Goblin Wars based in the Black Mountains, living in a squalid town around Black Fire Pass on the border of the Dwarf Realms. They spent their time bored, drinking in the saloon, running a toll booth, occsionally killing (and no doubt eating) unwary passing travellers, and generally raiding and making a nuisance of themselves. The whole thing has a slightly 'Wild West' feel to it to me.
When, towards then end of the Goblin Wars, the Dwarves decided to 'clean up' the area they attacked the Black Mountains and attempted to size the Pass. By this time Harboth's Orcs had been joined by Notlob's Orcs, and both sides fought a series of battles, forcing both Harboth and Notlob to eventually
flee tactically relocate.
Personally, I think this sounds like the basis for a great little skirmish campaign. 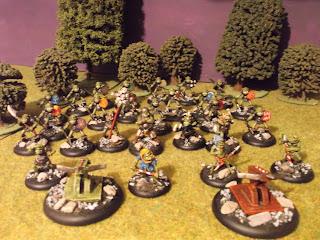 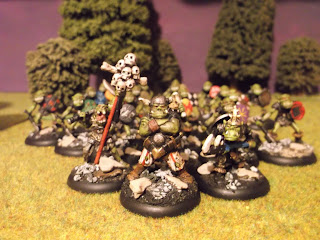 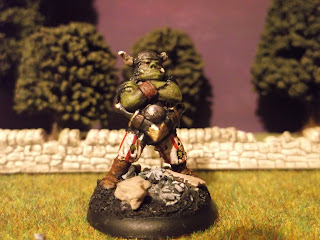 Harboth, leader of the Black Mountain Boys.
I really like this miniature. He has that sense of confidence and casual arrogance gained from being in charge of a whole bunch of Orcs and a town atop of a mountain.
He is quite a big Orc for the time, and his solid base was too large to place inside the dip of the lipped base or trim down.So I built up the base a little to suggest he is stand on top of mound, making sure everything is done his way. 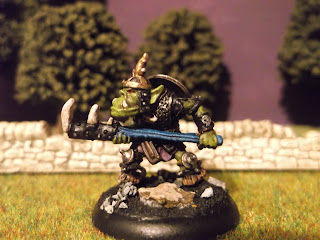 Yaskin Forit, the Champion of Harboth's regiment.
Yaskin is slotta based miniature, who also required a plastic shield for his back.
He is armed with an unusual looking double handed weapon, which I painted up to look like the teeth of some big monster.
The name Yaskin Forit is of course a play on the phrase "You asking for it?", as occsiaonally prelude to physical violence. 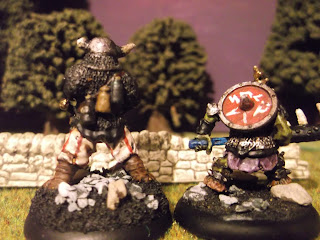 Rear views of Harboth and Yaskin.
I like the bottles hanging off of Harboth's bandolier (reminding me of the 'apostles' of a matchlock armed soldier of the 16/17th Century).
Yaskin's shield has 'Yaskin' painted on it in dwarf runes. 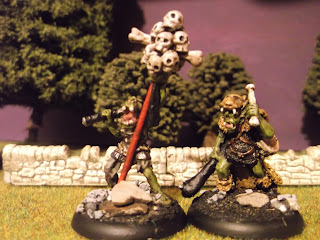 Standard Bearer and Musican.
I like the howling Standard bearer, with a standard made up no doubt of the skulls of poor unfortunate travellers who strayed too close to the Black Mountain, or perhaps did'nt have enough change for the toll at Black Fire Pass?
The Musican is wearing the fur of some creature, not sure what, might be a type of bear or lioness. 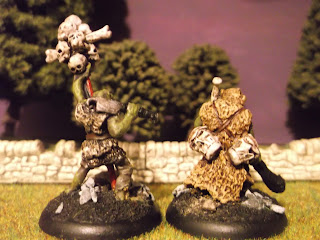 Rear view.
The Musican has drums made of what look like Ogre Skulls! 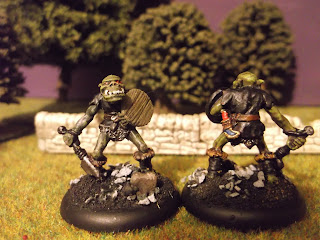 Troopers, front and rear.
They are armed with the infamous 'Dwarf Tickler' and wooden shield.
The background suggests that the Black Mountain Boys wear a collection of cast-offs and clothes. However I wanted to give them a more unified regimental feel, especially as they are to have a mix of shields. So I painted them to suggest they are all wearing black leather jackets, reminiscent of a bikers, 1950's hoodlums, or  heavy metallers.
I was going to paint them with heavy metal band names and album covers on the back, but after a couple of attempts I decided it was too fiddly. 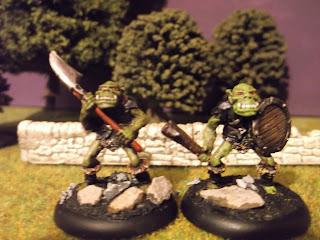 There were a couple of C-series Orcs based on the body of the Trooper miniature. So I added a few of them to add a little variety.
The Orc on the left, with the halberd is pre-slotta, the Orc on the right an early slotta based one. 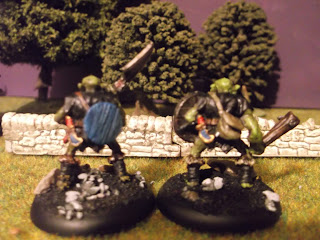 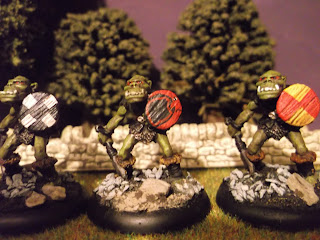 Some of the mix of shields.
The background states that the the Orcs have a mix of shield designs, so I have painted up a mix of designs.
Here, left to right, checkerboard; Moon (based on a design from the 3rd Editon Orc artwork in Warhammer Armies); and quartered. 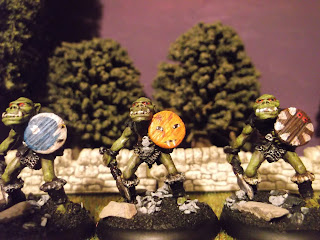 Another crescent Moon device; Goblin/pumpkin face; and a gaping maw face which was based on 'Fizzgig' from 'The Dark Crystal'. 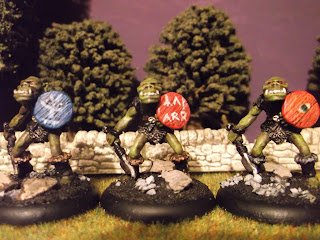 Stylised face; a shield with 'Zog off' written in Dwarf rune; and an eye. 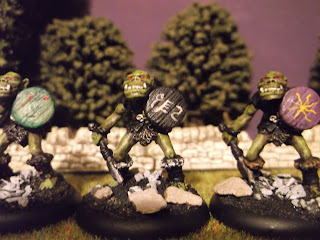 Green Man; 'Orc' written in Dark Elvish (from a list written in the 1st Edition Forces of Fantasy supplement; and a stylised sun. 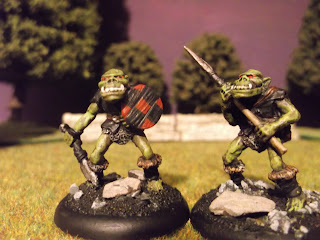 Finally, another check pattern, this time black and red.
The Orc with a spear is a repaired version of  another pole-armed Orc from earlier. 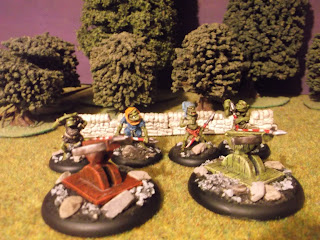 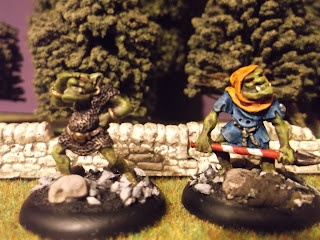 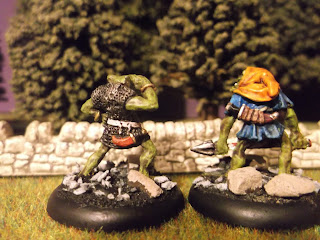 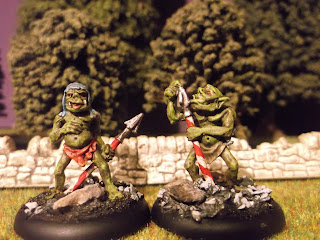 Two more crew.
The one on the left became a wider released Orc crew member.
I like the Orc on the right, testing the sharpness of the bolt. 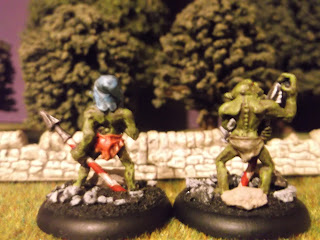 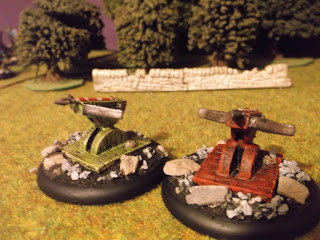 The Bolt Throwers.
As mentioned earlier they are similar to the later 1980's Bolt Throwers used by the Orcs and Dwarves.
The background stated that Notlob's Orc scrawled graffiti on the Bolt Throwers and Bolts, but I decided to keep them plain as I thought it might look too much.

Next update will be the couple of Trolls I am currently finishing off painting, and some Goblins, as I want to get back to painting some more Goblins. :)
Posted by Goblin Lee at 21:33