As a change from painting Goblins, but in keeping with my 'Goblin Wars' project, I decided to paint some Dwarves. And not just any Dwarves, but the first version of the Regiment of Renown, Bugman's Dwarf Rangers.

During the 'Goblin Wars' Joseph Bugman ran a famous brewery, supplying beer to both Goblins and Dwarves. This was fine until Goblins killed his son Bono Bugman. In true 'not to be messed with' Dwarf style, Joseph gathered together a collection of his workers and went off after Goblins in search of venegance. So Bugman's Dwarf Rangers were formed.

This went fine for a while until they returned home to Bugman's Brewery exhausted from campaigning. It was at this point that they were attacked Goblins, who overran the Brewery, killing everyone, as Goblins are occsionally want to do! Joseph Bugman's body was never found  (at least until late 2nd Edition Warhammer Fantasy Battle, but that's another story, and set of miniatures!).


Here is a link to the background of the first version of Bugman's, and the miniatures:

Concerning the miniatures, I have been looking forward to painting them for sometime. They are all one-piece solid based/pre-slotta models produced in 1984, although the first version Champion is a slotta based model, and like many of the other Regiments Champions was added later. I never bought them at the time, but picked up the models in dribs and drabs over the 1990's and 2000's, but had never got around to painting them.
In the end I managed to collect a unit of 20, including the three orginal command miniatures, but alas not the very rare champion, Jorj Ruddle. If I ever get him, I'll probably expand the Regiment with a few more Troopers as well.

Unfortunately, I was a little disappointed with them when I came to paint them. Bugman and the Command models were fine, but the Troopers were terrible to paint. I found the sculpts a little flat and dull, and although the quality of the sculpts were fine, they did'nt seem fun or inspiring to paint. The paint kept chipping or rubbing off whilst handling. Additonally the eyes were very tricky to paint on the Troopers, being very deep set, and I had to repair several of the crossbow arms which seemed to be miscast. It might just be that I was unlucky with a couple of the castings, but I much prefer the Fantasy Tribes Dwarves I have for the 'Goblin Wars' project, or the later 1980's Dwarves.

However, depsite my misgivings, I am pleased with how they look on the gaming table.  I based them the same as the other of my 'Goblin Wars' miniatures, and painted them according to the uniform description given in the first version of the background. There was no infomation on the shield colour, so I painted them blue, the same as the second version, and to give the models a dash of colour from all the drab buff and browns.

Gaming wise they are a formidable foe. They look like they are wearing heavy armour (heavy Buff coats and Chanmail), with a shield. They are armed with hand weapon (axe), additional hand weapon (short sword),  double handed weapon (axe), and of course the crossbow. This makes them well equiped, armoured, and with a full command unit. 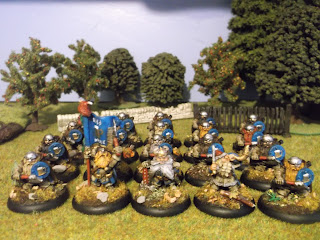 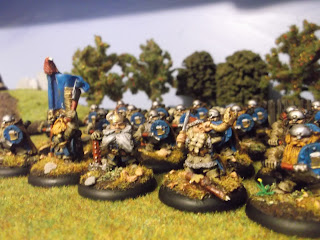 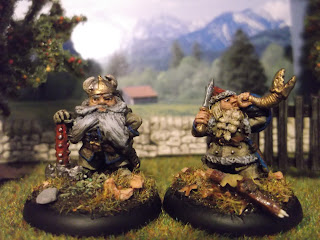 Joseph Bugman and Muscian.
I quite like the Joesph Bugman miniature. Like a lot of the leader miniatures of the first versions of the Regiments of Renown, he is striking a standing pose, almost posing for a photograph.
The horn player is a great dynamic posed miniatures. 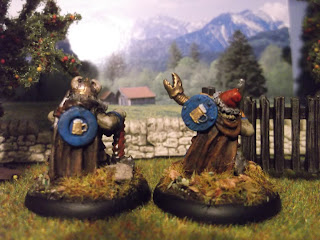 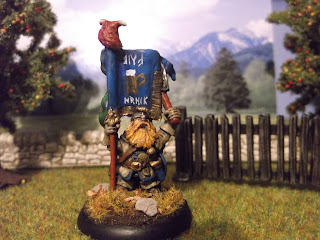 Standard bearer.
There was no design for the standard, so I painted the beer mug from the shield. I also painted in Dwarvish Runes (from the Lord of the Rings appendix)  the Bugman's warcry "Mhinz Abeir", which I assume the open mouthed Standard Bearer is yelling, expecting the reponse "Z'yor Rond" from the rest of the regiment! 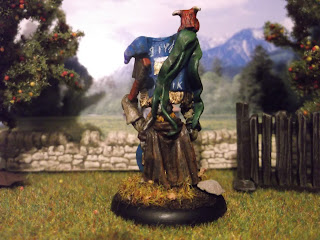 Rear veiw of the standard. 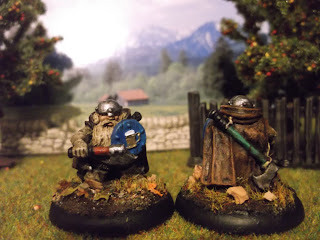 Bugman's regiment Trooper, front and rear.
To be fair, the Troopers do look mean and weather-beaten veterans.
The rear shows the double handed axe and cloak.
I painted the Double handed axe shaft green to add a little more colour and suggest their Ranger role. 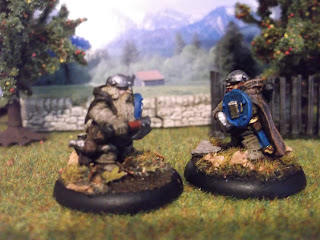 Side views, showing the crossbow and short sword. 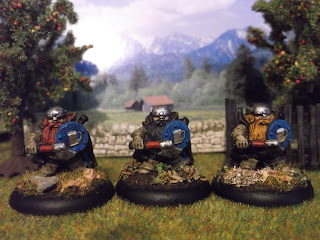 Line of Troopers with a mix of beard colours. 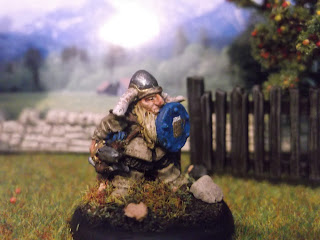 Bono Bugman!
Well, not quite.
However this Citadel C-Series Dwarf miniature is converted from the 'Trooper' miniature, and you could even see wear they had scrapped of the beer mug icon from the shield! So I thought it would be fun to paint him up in the same colours scheme as the rest of the Bugman's regiment, although I have'nt included him with the other 20 Bugman's.

Next update will probably be more Goblins of the 'Goblin Wars' as I have a wish to paint more Goblins. I am also painting up a couple of Trolls, so they should be ready too! :)
Posted by Goblin Lee at 21:28