Musketeer and the Captain of the Cardinal's Guard.

I still have'nt been much in the mood for painting in the last few weeks. However, instead I have been sorting my human miniatures into various armies based on the nations of the Old World, with an idea to do seperate armies on them. I have been quite successful in sorting them out, but the project will still require a mail order to Wargames Foundry for a few items. I've been buiying old Fighter miniatures from e-bay to add characters (and characters!) to the armies.

With that in mind I decided to paint up a couple of random miniatures.

I have always been a fan of the Three Musketeers, and Four Musketeers, especially the 1973 film (or films, as they filmed the two at the same time). I love the humour of the films, and the 17th Century history. So as I was sorting through some old Citadel Fighters and decided to paint up a pair of miniatures in that Musketeers vein. They will be the unit commanders of a pair of Arquebus armed units in my re-vamped Bretonnian army. As an aisde, the new idea for the Bretonnian army is Knight heavy, with few infantry, the Arquebusiers being added for flavour and humour. 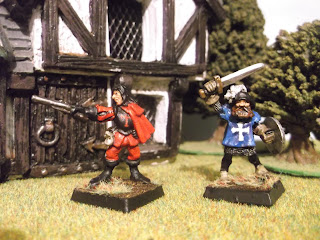 The two human Fighters.
On the left is a Citadel F2 Dogs of War range 'Falcon'.
On the right is another Citadel F2, but a Fighter range, 'Altdorf Captain'. 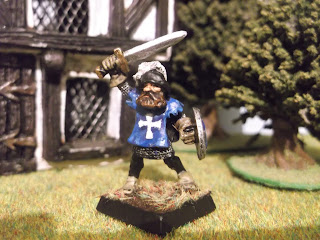 With the tabbard, I thought he fitted the Musketeer vibe. I am aware that he is a little out of date for the Musketeers era, but as it's for a fantasy Bretonnian army, it's fine. 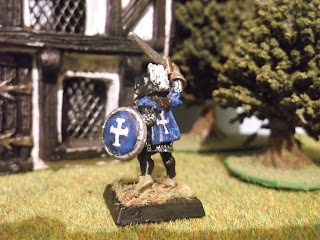 Rear view and view of the buckler. 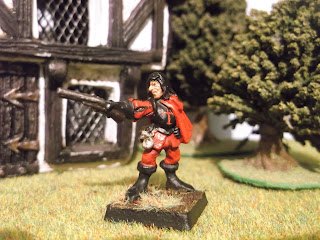 Captain of the Cardinal's Guard.
There have been several incarnations of the Cardinal's Guards uniform, so I based mine loosely on the 1973 version as the red and looks very striking.
I really like this miniature, the pose and style look more 17th Century to me, and the miniatures has a cocky attitude betting of adversary. Like the Musketeer above I have owned them since the 1980's,  paint-stripped the old 1980's painting to start anew. 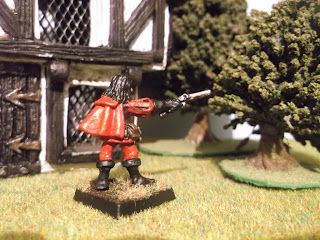 
Next update will Pan Tang, as I really have to focus on finishing them. Still looking forward to painting the Tigers.
Posted by Goblin Lee at 21:32