There's a Troll in the Garden!

Well not exactly in my garden, but more of that later.

This week it's a bit of a smaller update as I have'nt had the time to spend on painting. For those of you from the 'Oldhammer' Community who read my blog, I won't be able to make this years BOYL due to work commitments. :(
...still it will give me another year to finally finish the Slann army and invade the North!

Anyway, after spending the last two weeks painting Regiments of Renown, I have returned to the painting more general miniatures of my idea of the participants of the Goblin Wars. I have painted one C series Troll, re-painted a Ral Partha Troll and Giant on an Elephant, a pack of wolves, a random Orc, and the old solid based Thrud. 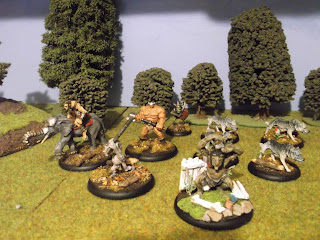 The latest batch of minautre, ready to wreak havoc in the Goblin Wars. 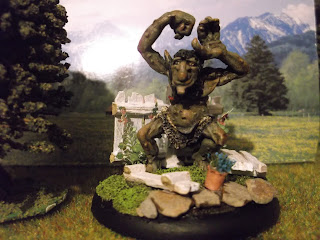 Citadel C20 Troll, 'Rattlebones Bowlegs'.
I wanted to base him up to suggest that he had broken into someones garden and is about to cause chaos. 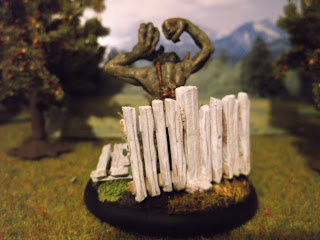 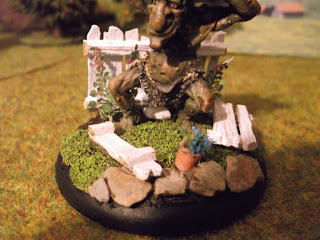 Top view of the base.
I added some smaller flock to suggest a lawn, some stones for 'crazy paving', a small flower pot, and a couple of model Hosta's in the bare earth strip by the fence. 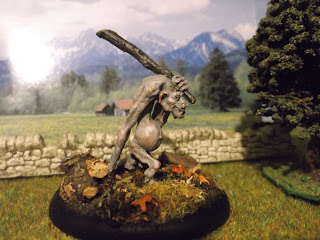 Ral Partha RP5 Monster range Troll.
I had painted him before, some time ago. However I decided to re-base him (on a 50mm round lipped base) for the Goblin Wars, and re-painted part of the skin, adding slightly pink flesh on parts of his grey skin to give him a little more life. 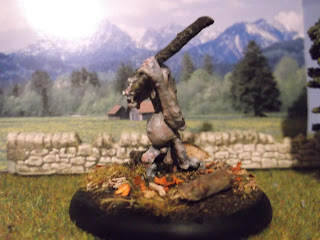 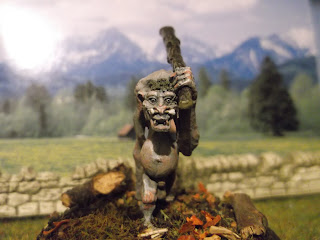 Close up of the face.
I think it's an excellent piece of sculpting and deserved a closer look.
As far as I am aware, he was sculpted by Tom Meier. 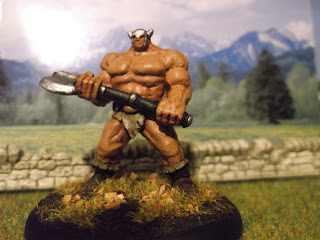 Thrud the Barbarian, of the White Dwarf comic strip fame.
This is the first miniature of Thrud to be made by Citadel, and released in the SS6 White Dwarf Personalites box set.
He was fun, and very easy to paint, and will lend some support to the Dwarven cause, providing they keep him in beer! 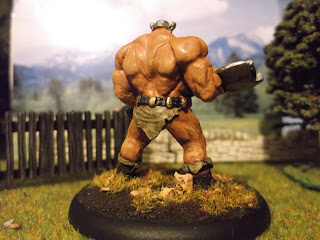 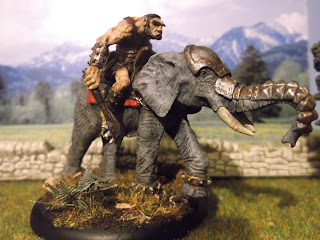 Ral Partha Giant riding on an Elephant.
He is another of my miniatures which I had painted before, but decided to re-base and give a painting 'make over' to.
He's a great miniature and an unusual model, and adds a potent line-breaker to any army. 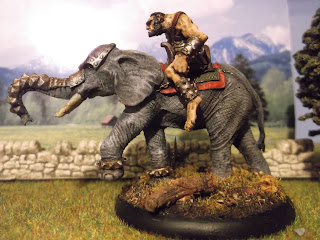 Left hand side.
There were several variants of the Giant produced (only one elephant I understand), with the Elephant and maybe this particular Giant sculpted again by Tom Meier, later riders by the Perry Twins.
For more on them here's a usful link:
http://www.collecting-citadel-miniatures.com/wiki/index.php/Giant_elephant_riders 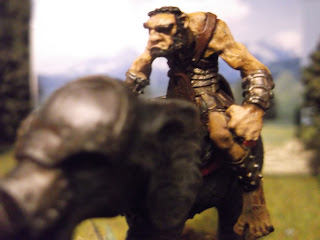 Close up of the Giant. 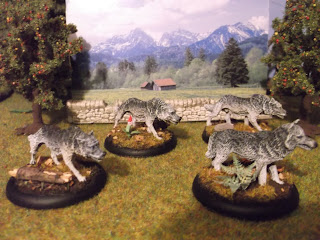 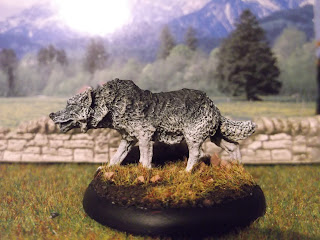 One of the three Wolves from the pack. Three of the Wolves are the 'Vicious Giant Wolf' from the BC2 Monster Starter set. 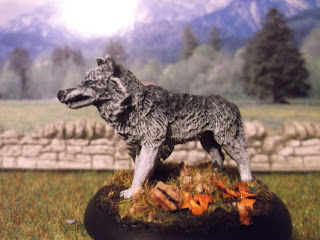 The fourth wolf is the FF69 Giant Wolf. 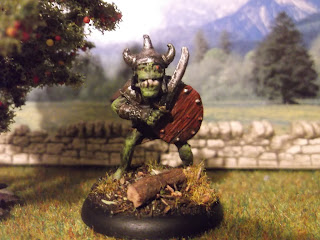 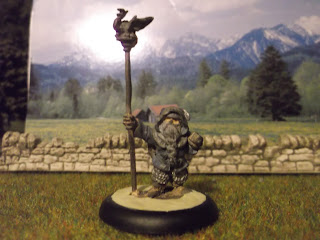 FTD 9 Dwarf standard bearer, not painted yet, but I am just happy to have bagged one (and not broken) on e-bay. 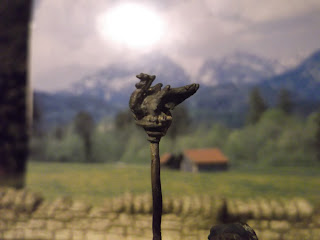 
Next update will be more Goblin Wars stuff, but not sure what as I have'nt painted them yet! Probably some Goblins. :)
Posted by Goblin Lee at 19:47