Since the last blog entry I have'nt had a chance to do any painting, although I have been sifting through my collection and working out what to organise into which regiments and armies. Other than that I have been paint stripping miniatures, ready for photographing. Which brings me to the blog post.

The aim of this post is not necessarily to give close up detailed pictures of the Regiments of Renown I have, but to just give a quick overview of them on and what is still left to paint. I will be adding better photographs as and when I re/paint each unit, and close ups of the command figures and troopers.

Looking for and sorting out the regiments has given me a new found regard of the miniatures and for the idea of the Regiments of Renown, and wish to paint them up as the Regiments themselves rather than just another unit in an army. I am interested to know if people use the Regiments as just alternative models for an army list entry, or use them seperately as an add on to the army list.
Perhaps this is more a difference in approach between 2nd and 3rd edition gaming and lists. Using them as a basis for backgrounds and campaigns, as has been done with Gurgull Greenwake's Slann and the Kremlo Norse on the 'Somewhere the Tea's getting Cold' blog is maybe another option.

So next on the agenda is to organsing  miniatures into proper armies, and maybe re/painting up some of the Woods Elves, starting with the Skarlocs. 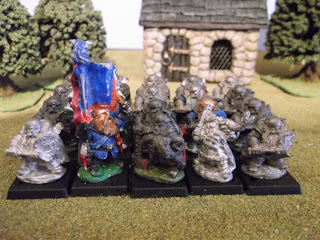 RR1  Bugman's Dwarf Rangers (version 1). I have 20 of these, but I still require the Champion figure 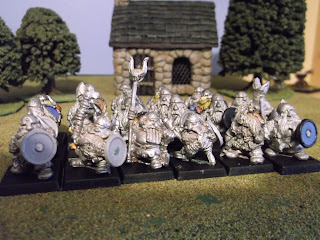 RRD 1.  Bugman's Dwarf Rangers. Got the full command and 23 of these, aim to get another 2. 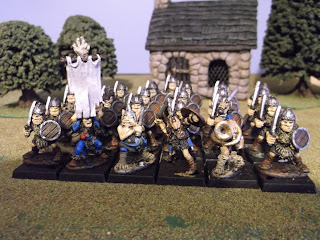 RR3 Grom's Goblin Guard. 25 of these, still have'nt got around to finishing them. 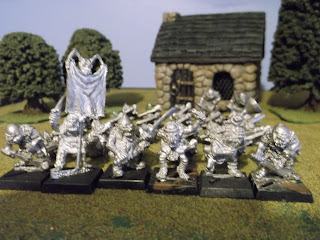 RR3 Grom's Goblin Guard (version 2).
30 of these, including a few of the trooper varients which were released in with the general Goblin warrior ranges and which unhelpfully you can't quite see from in the photo :(  . 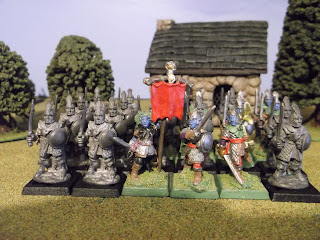 RR4 Mengil Manhide's Company (version 1). 30 Dark Elves.
The Champion miniature for this set is the elf with a hawk in the  second version of the set below, and was added late in the production run. I have a second champion, but forogt to add it to the Regiment photo ! 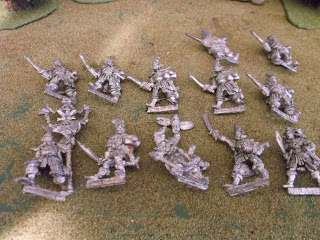 RRD11 Dark Elves Mengil Manhide's Company (version 2).
The later 1980's version, and with the Witch Elf also now added to the set . I bought another 6 of the standard troopers today on e-bay. :) 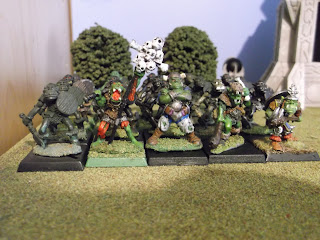 RR5 Harboth and the Black Mountain Boys.
20 orcs and command, before they the acquired bows. 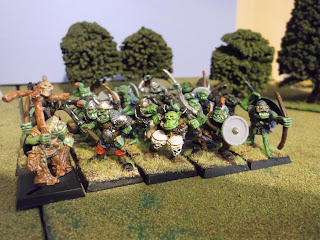 RRD3 Harboth Orcs Archers.
A regiment of 20. I have about the same number again  including a drummer and standard bearer. 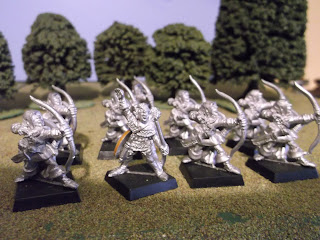 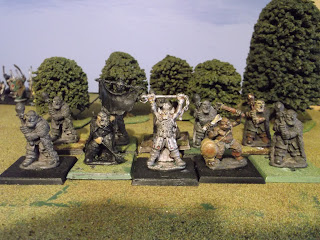 RR8 Golfag's Mercenary Ogre's.
10 solid based Ogre's . No champion model for these was produced. 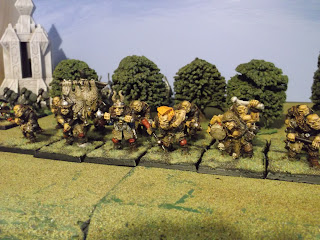 RR8 / RRD12 Golfag's Orges.
12 of these, and all 4 command.
These look really good on the battlefield. 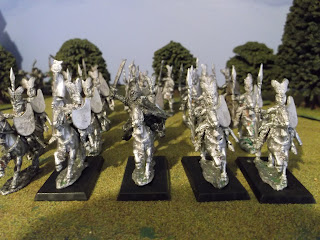 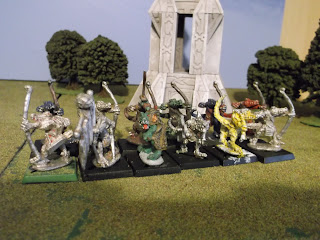 RR11 Karnac's Liazardmen Raiders.
12  Lizardmen with Longbows. I have a few other troopers with broken bows, and another full command group, so might end up with 2 seperate regiments of 10. I'd love to used these with the Slann, the longbows would come in handy ! 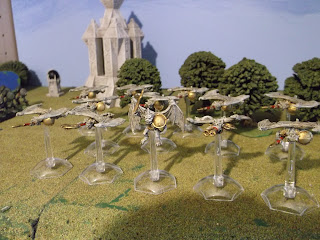 RR12, The Flying Gargoyles of Barda. 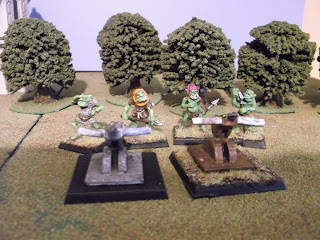 RR14 Notlob's Orc Artillery.
The Stuff of Legends website is correct in stating that the bolt throwers are slightly diffirent from the later 1980's Orc/Dwarf ones. Less detail, and no bolt on the side. 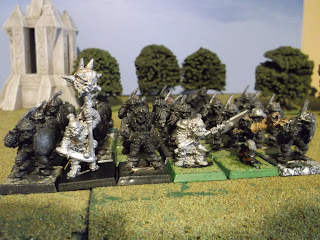 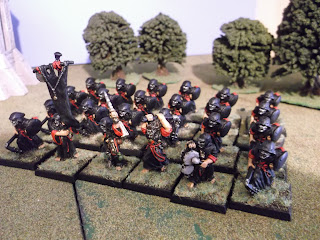 RR16 /RRD 7 The Disciples of the Red Redemption /Chaos Cultists. 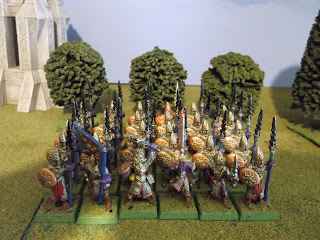 RR17 / RRD10 The Avenging Knights of the Cleansing Flame (Imperial Knights).
30 knights. The burning brazier on top of the flag got damged, but I still have it and it will be driled and pinned back to it's former glory. And then the knights with be repainted too! 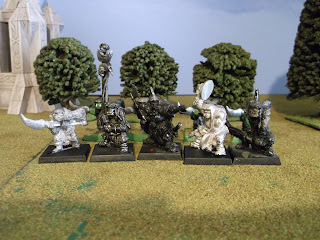 RR18 / RRD8 Eaza Ugezod's Mother Crushers / Giant Black Orcs.
Only 9 of these, but the full command.
I always wondered if Eaza Ugezod was related to The Mighty Ugezod of the Death Commando's box set ?! 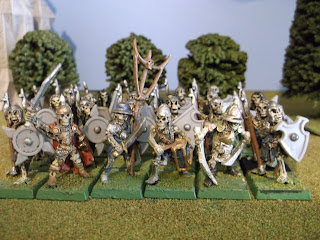 RRD2 Nightmare Legion.
24 of them.
These were the first regiment I ever got, for my 13th birthday. I recently replaced the shields as per the front of the box as part of the prepation for repainting them. 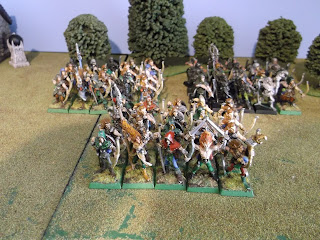 RRD4 Skarloc's Wood Elf Archers.
These 3 units of 20 form the bulk of the Wood Elf archers and are the iconic Wood Elf regiment
They are in need of a re-paint and a touch up of the paint after a  box of my Wood Elves with these inside was up-ended when I was moving house  :( 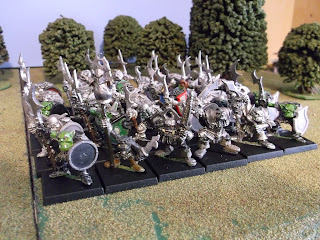 RRD5 Ruglug's Armoured Orcs. The famous heavily armoured and armed Orcs. I have the plastic crossbows that go with them, and will add them once painted. 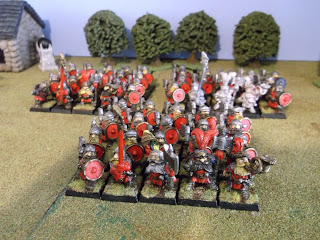 RRD6 Prince Ulther's Imperial Dwarves- The Dragon Company.
The 3 units of 20 of these form the centre of my dwarf army. These look great on the table. These just need finishing off, rather than re-painting.