Carrying on from writing up  a 3,000 point Dwarf Army list, I wrote a Slann one. I have'nt got very far with painting the Dwarf army yet :(

This was an easier project as I only have two Slann miniatures to paint and then the 3,000 point list is done ! I still have lots of Slann, pygmies etc to do to complete them, but at least I have a list up and ready. I am also looking at going back and adding better Standards and back banners too.  For a theme I thought I would have Kremlo as the army General leading a group of Slann, perhaps after he came to senses after the attack on Zapotec and released he is not a Norseman! The Venenge of Kremlo sounds like a good name for a follow up campaign.

The overall plan for the army, like always with Slann, is to attack. As Slann have no war machines, and blowpipes are 12 inch range (-1 over half range ! ) , the key is to get in to combat soon, especially against missile heavy armies, such Elves, Dwarves, and Empire.
From gaming experance the Slann are like Orcs  without the bows, warmachines, and amnosity, but with better Ld and choice of Elites. The Slann T4 is a great help, difficult to kill, and they don't run away very often. The only problem is that they are'nt cheap in points. That's why I take Jungle levy to bulk out the army, and as the maximum unit size is 20, so making sure your ranks are'nt delpeted too much so you lose combat is tricky
.
Kremlo will lead the centre of the army with the Eagle Warriors.  He will be supported by the Aligator Warrior who with two handed weapons and a Level 15 hero who can tackle heavier opposition. The blowpipe troops will act as a skirmish screen and harrass the flanks. The Bull Slann and Spawn Bands are good solid troops to full out the army. The Jungle Tribes are to bulk things out, the ones with blowpipes are useless over 6 inches but act as a screen and annoyance. The Dragon is anti-monster, with wings means he can re-locate easier,and the pond Dragon seems so right for the Slann as I never got the Citadel Toad Dragon. The frog is spare points , and why not a Giant Frog!

I will tinker with the army, and write bigger lists for it as I paint more. I will look at losing maybe the Level 10 wizard and Jungle Braves with blowpipes so as to add Pygmies.I don't usually go for Cold One riders as they are very expensive in points, and the rules for Cold Ones mean you can't use them to counter charge or react to things.

The last few photographs are in response to queries about the Dwarf General miniature. I have put some more photo's of  the similar sculpted Dwarves up, none of them are conversions. 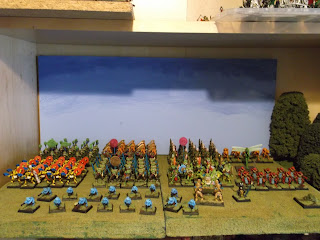 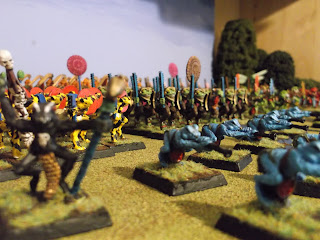 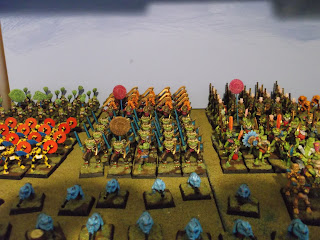 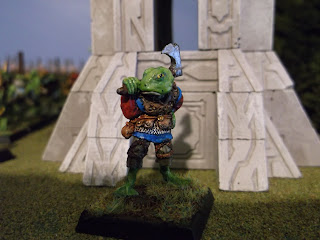 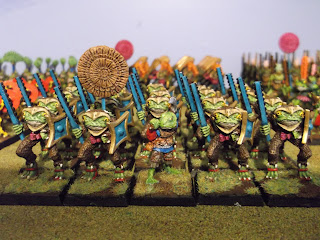 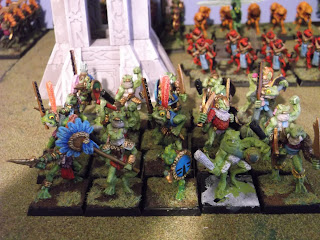 20  Spawn band.
Need to paint the (converted) drummer, and a warrior at the back. 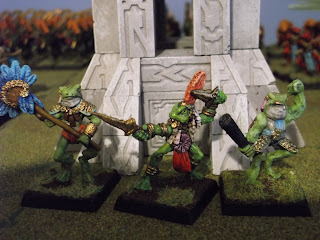 For most of the Spawn Bands I have used the fan bearer from the Wizards litter as a standard bearer. Also are Cupacocoa and an unlisted Slann with club. 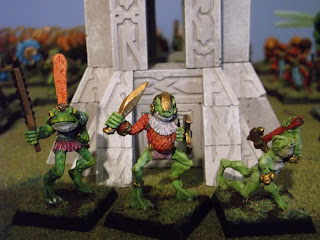 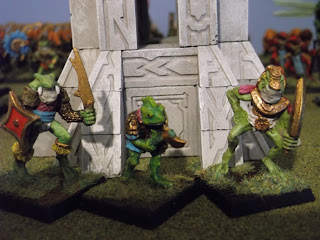 Unlisted Slann with Sword, the Brave with axe from the Magnificent Sven, and Nanazuin. 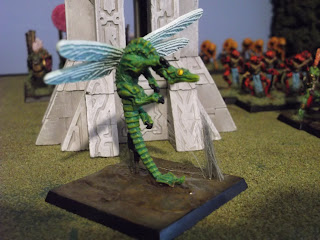 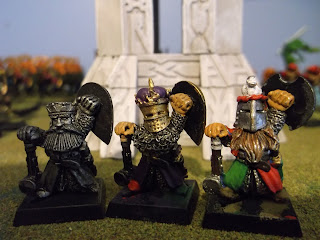 We three Kings:
One with small crown, one with a bigger crown, and the last one with a duck on his head (might paint it up as a Mallard or a fat Swan!) 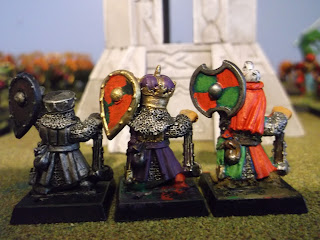 The back of the helmets. The bodies are all the same. 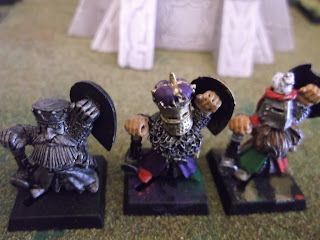 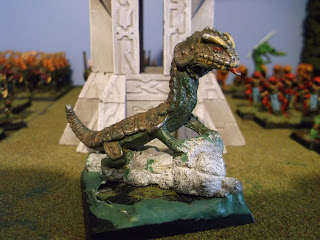 A Grenadier monster that I found in an box of stuff. He is mounted on a 50mm square base. I think I might use him as the Level 1 Dragon for the Dwarf army. I will use the other for Wingless Dragon for the Norse. 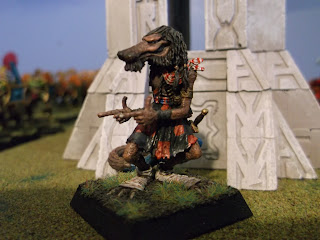 Commander Gringe from Dark Sword Miniatures Parkinson Range.
I just love the cocky look and casual air about this miniature, but I would'nt trust him LOL!
I painted him up as per the artwork, and he is mounted in a 30mm hollow square base.

As I was looking at pictures of Slann on the internet to find names for some I started looking at the CCM collecting guide for Slann and noticed that three of the Slann I have are'nt listed at all.
There are a couple of famous unlisted Slann, such as the one with the two handed axe on P232 of the 3rd Edtion Rulebook; and the one with the dagger on the front corner of the Spawn Band Regiment in Warhammer Armies P115. However, niether of those (which I don't have either yet!) are listed , as are'nt the following three Slann. None of these are conversions or recastings as I have in the past paint-stripped them all, and there are no conversions on them, nor are they poor quality resculpts/recasts, but seem of the same time as the other Slann.
Please let me know if you have any more info: 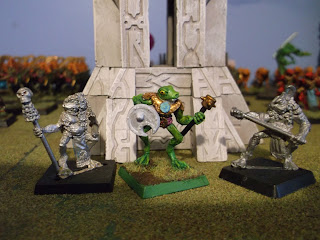 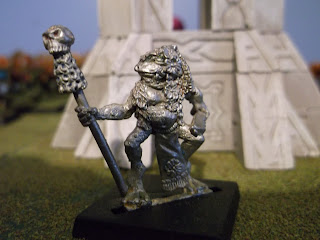 Front view of the Wizard 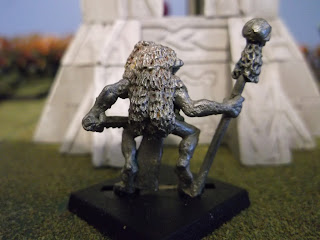 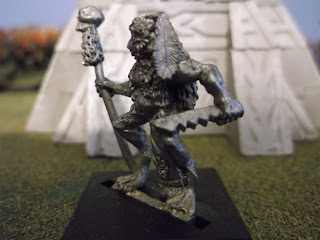 Side view showing the dagger. 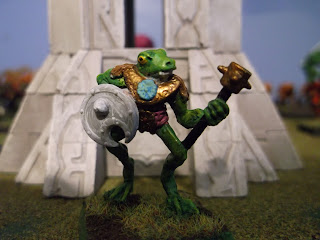 The mace wielding Slann. I paint stripped him and pained him up years ago. He will be repainted. 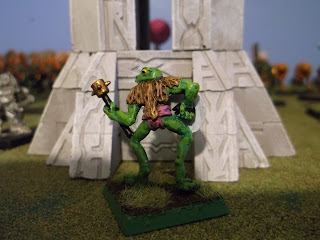 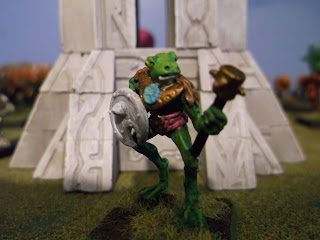 Side view. theright hand has the boss to put the shield onto. 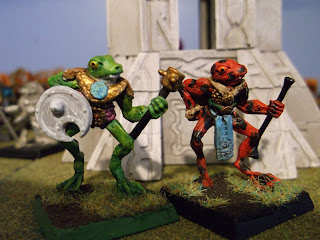 Like many Citadel miniatures from the 1980's , the Slann seems to be a variant of another, in this case the blowpiper Pinacolada. Both suffer from having delicate ankles too, a common weakpoint on the Pinacolada miniature. 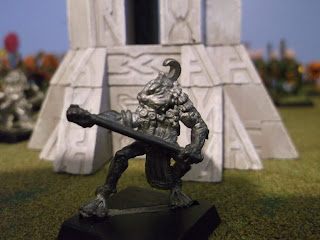 The third of the Slann.
It seems that this Slann has the top of the weapon broken off, so I have no idea what it was orginally like. If you look on p115 of Warhammer Armies, it looks like he is lurking in the back right hand corner of the regiment. 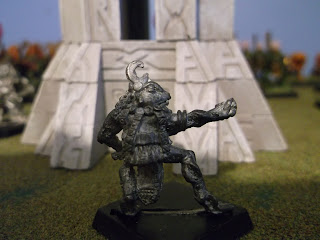 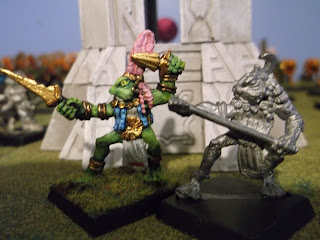 Again, this Slann is similar to another Slann, this time Cupacocoa.