Just a quick update for today, I'll probably do a another better update with more pictures of something else on friday, and then one on the Dwarf army for sunday.

As part of my ongoing sorting out of armies, I have paint-stripped, re-organised and undercoated my old 1980's Dark Elf army, and then wrote up a 3,000 point army list for them. I have also written up a provsional 3,000 point Bretonnian list, and been getting stuff together for the Undead army, but more of that at a later date.
Sadly, I have'nt been able to get much of the Dwarf Army painted, although there is not a lot to do, so they will be done soon.

My Dark Elf army has always been overshadowed by other stuff in terms of collecting and gaming (Slann anyone!!). I always liked the background and the feel of the army, but as I spent a lot of time fighting Wood Elves and Dwarves,  felt that as an army, they lacked something.

Firstly, I found the list itself constricting as they seemed to have the highest points value worth of compulsory troops of any of the armies. The 40 Warriors, 10 Witch Elves, and 20 Crossbows, makes 800 points before you start. Only the Orcs and Goblin have a higher number , 80 troops at 450 points.

Secondly, especally fighting Wood Elves, I found that the 24 inches ranged crossbow was no match for a Elf long bow. The bow has a range of 36 inches, a good 12 inches more range the crossbow, meaning that I had to spend 2 to 3 turn moving to get in range, then wait until next turn to fire. With the standard tactic of hanging back on the table edge by armies such as Elves and Dwarves it meant sometimes spending 3 to 4 turns with out returning fire and getting shot at.

So I have designed this army to combat this more. I took a lot more Crossbowmen, and they have shields for advancing. Two units will advance skirmishing to benefit from the -1 to hit, and to maximise thier return fire.
The Witch Elves are crossbow armed, and there are more Warriors than I used to take to mitigate losses and to split enemy fire. In addition,the General on the Dragon, the bound Hippogriff, and the Harpies, provide a faster flying menace that can allow the foot soldiers to advance and see off any Giant Eagles. I took the heroine on a Temple Dog to provide hard hitting magical based close combat support, and because I love the model, and why not field a Temple Dog if you have one!?

I did'nt go for Cold One riders, or any Cavalry as they are expensive in points, and with a smaller sized the Dark Elf army to pay for them, they would not be sheltered from missile fire.  I might go for Dark Riders with Crosbows at a later date. Also, the Repeater bolt throwers did'nt work with a fast moving advancing army, and with only 2 crew, are suprisingly fragile.
I might try to find 30 points from somewhere to give the Witch Elves poisoned attacks, as strength 5 crossbow shots are unexpected!

40 Crossbowmen with hand weapon,light armour and shields (to be split into 4 units of 10) = 560 points 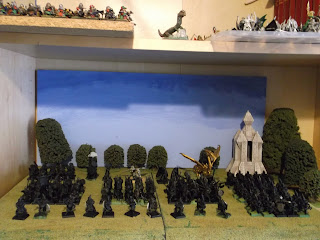 The army on the board (with the Dwarf and Wood Elf Armies on the 'to do' shelf above ! 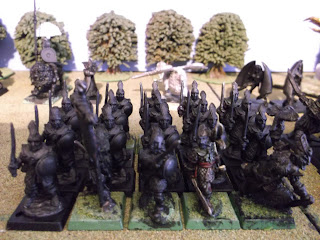 20 Warriors made up from the solid based RR4 Menghil Manhides Regiments of Renown set.
The paint scheme for the entire army will be largely black, with a few dark pieces of metal, and a limited palatte of a few dark colours for equipment. I might go for some gold details if I keep the Dragon gold. 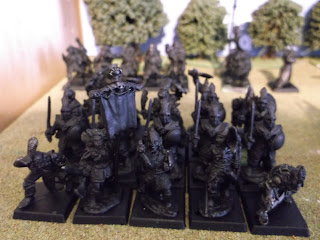 20 more Warriors, with a mix of Menghil troops and C09 Dark Elves. 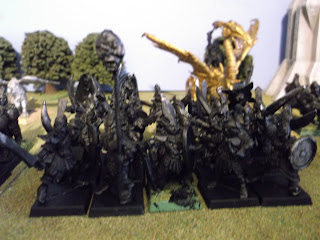 20 Warriors with double handed weapons and shields. A mix of Citadel and Marauder figures. 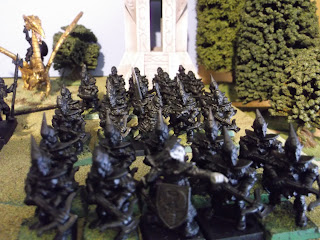 3 units of Crossbowmen from the PBS3 Warhammer Regiments. I forgot to photograph the other unit, but there are a few lurking in the background of the photograph below. 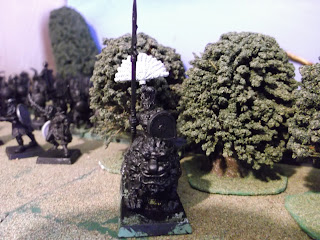 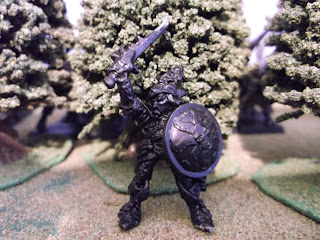 Army general, a spare Dragon-horse rider with a Marauder shield. 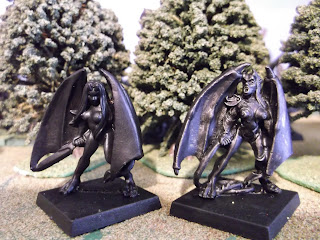 2 Harpies.
They are two demonettes from Spyglass miniatures, and I think they fit in well. I had no other use for them.  I do have 2 of the Bob Olley Harpies, but no idea where they are. 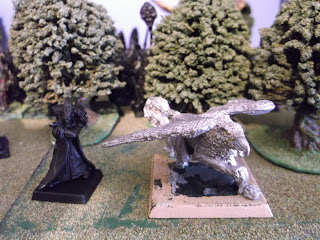 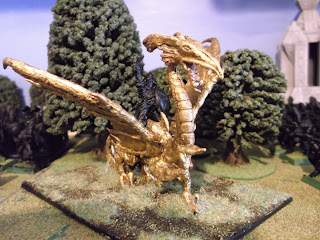 Elf General on Dragon. I painted this Dragon up recently with an idea of putting it in the Bretonnian army, but I plan to make a green stuff saddle and use him here. Not sure if I will keep the gold colour, not too keen on it. Might go a dark midnight blue. 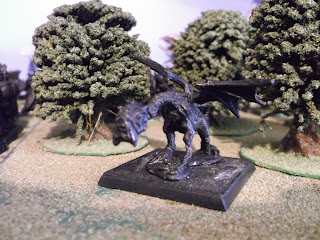 The poor, forlorn, and not included Jabberwock.
I was going to use it instead of the Hippogriff, but I wanted something not subject to supidity that might wonder off. He'll end up in one of the Chaos armies probably.