After saving up I did a little bit of shopping last week , and received my Wargames Foundry Order yesterday.
I sent off for a few Knights and some footsoldiers to complete my Bretonnian Army and add another cannon to my Empire Army. I have written a provisional army list for them, but will tinker with it an publish it later. I wanted the army to look similar to Dave Andrews famous army in Warhammer Armies, and  Wargames Foundrys War of the Roses range is made up from Citadels old C26 Men at Arms range. They also still produce Citadels the later Men at Arms range (under tha Barons War range), the Norse, Samurai, and the Normans.

I have'nt had a chance to do much painting, but did a couple of test models for Snakemen.

Last week, whilst waiting for the Bretonnians, I was sorting out the High Elves. Again I have written a 3,000 point provisional list, and  realised I have enough cavalry and infantry to do a two seperate armies. So might do a pure cavalry army, or a predominantly Cavalry one loosely based on Forenronds last stand army, and then another army painted to represent a different Kingdom. I've got an Elf casualty somewhere to represent the unfortunate Forenrond!

And to finish, I have photographed  a few more Goblins archers. 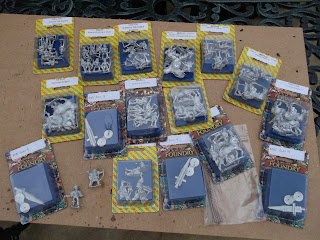 Wargames Foundry Order.
I ordered it on the 19th July, and it arrived on the 23rd, which considering the intervening weekend, is a pretty good turn-around. A friendly 'thank you and enjoy' handwritten on the invoice too. 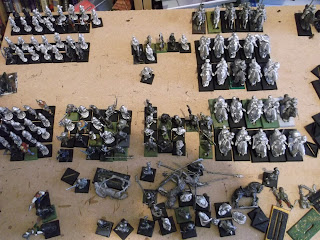 The Bretonnian army taking shape, with Foundry miniautres in place. 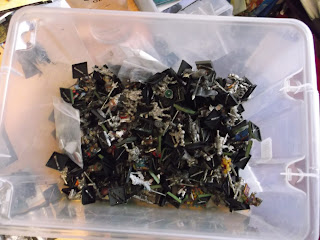 The unsorted Empire army in it's box! 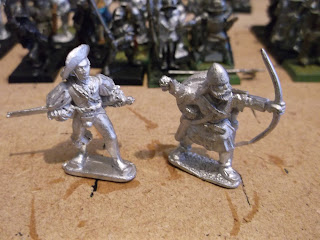 Two free miniatures from my Wargames Foundry order.
A Landschneckt captain, and a Viking archer. Both useful, I needed another archer for my Norse army. 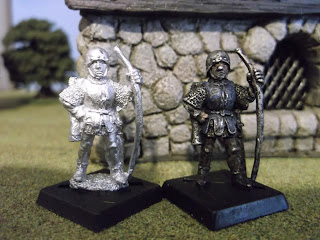 The Wargames Foundry miniatures are ever so slighly smaller than the original Citadel C26 Men at Arms. I assume they re-did the moulds. It does'nt show, but thought I would put on a comparison photo. 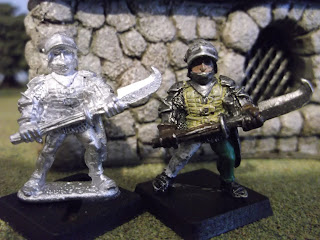 Comparing the Billmen.
The miniatures look really good, especally the mounted Knights, and I am happy with the order.
If you plan on using them with later miniatures (1990's onwards), or Marauder ones, then they look smaller, although some Marauder miniatures were always a little bulky. 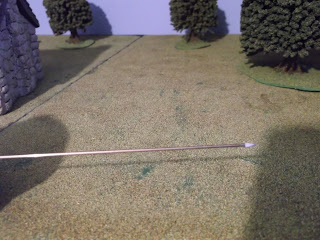 One of the lances that came with knights. Not sure what they are made of, but they are copper coloured with a steel looking tip, and are very strong and detailed on the head. 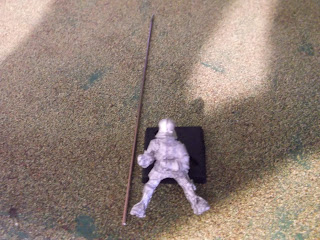 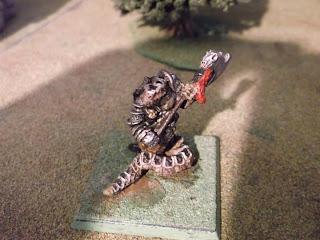 Snakeman test model.
I have gone for a Rattlesnake colours cheme as I did'nt want to paint them green, and I thought a lot of the more colourful snake markings would not translate very well to painting them on the arms.
I also like it as a background idea. They are to be stand-in Fimir for my Dark Elves. As Dark Elves live in Naggarond, which is basically in the North East of the New World then perhaps on their travels in the New World they might meet Rattlesnake like Snakemen living in the south of the New World. 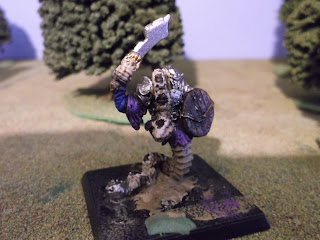 The other work in progress Snakeman test model, showing the head markings. 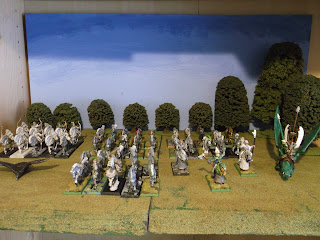 The High Elf Cavalry army.
Apart from the Dragonlord, some of the army is in need of repainting and tidying up.
I also have 19 of the Regiment of Renown RR10 Elwing's Elven Guard Cavalry to add if needed (I have a spare 1980's Citadel Lord of the Rings Elrond on a Horse to make it up to 20). 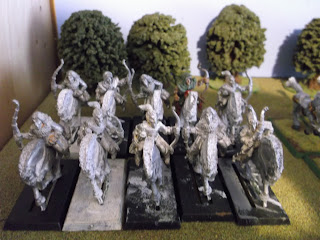 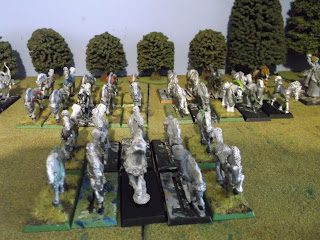 30 horses for the Silver Helms. 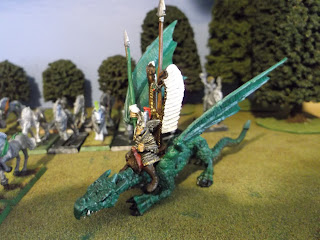 The Marauder MB17 High Elf Dragonlord.
Need to do some more detail work, give him a shield, and then varnish/base him. 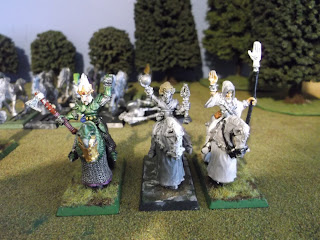 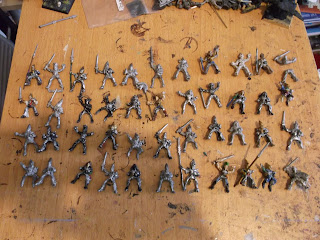 44 High Elf riders.
I have the plastic spears to arm them where needed. 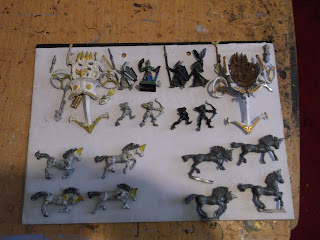 2 Elven Attack Chariots.
I seem to be missing one of the Wizard miniatures with Hawk, so I will replace him with the figure currently on a base. 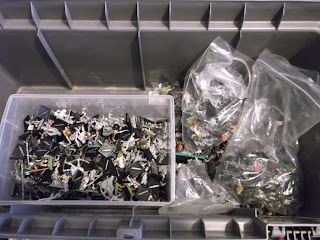 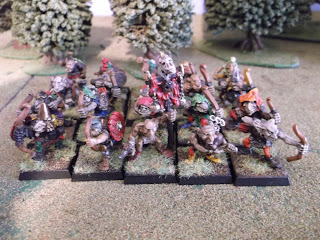 Goblins!!!
20 of the cute little critters with bows.
(well I think they are cute!)

Only 20 Goblins I'm afraid in this post as I have'nt had time to photograph more. 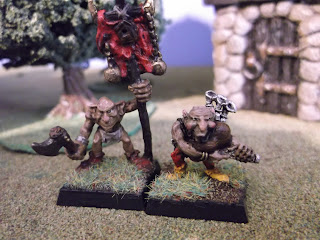 Standard Bearer from the Command range, and another of the C12 Bag Blower musicians. 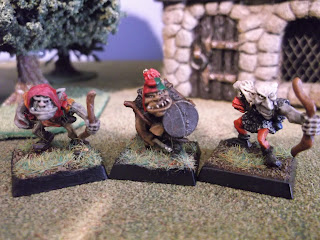 Two later 1980's Goblins either side a Lord of the Rings Snagga Goblin. 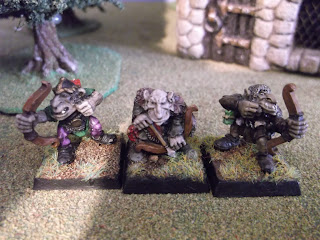 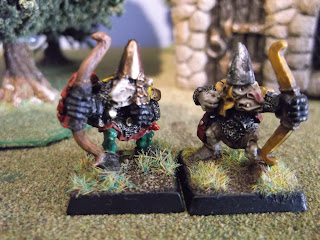 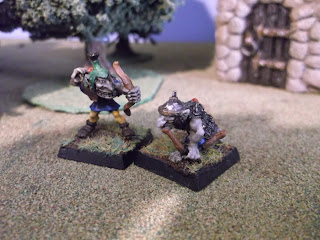 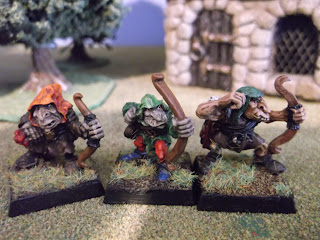 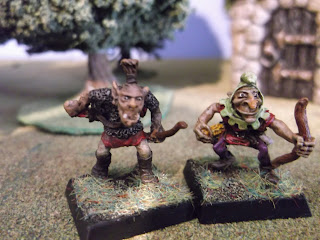 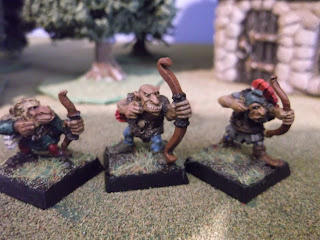